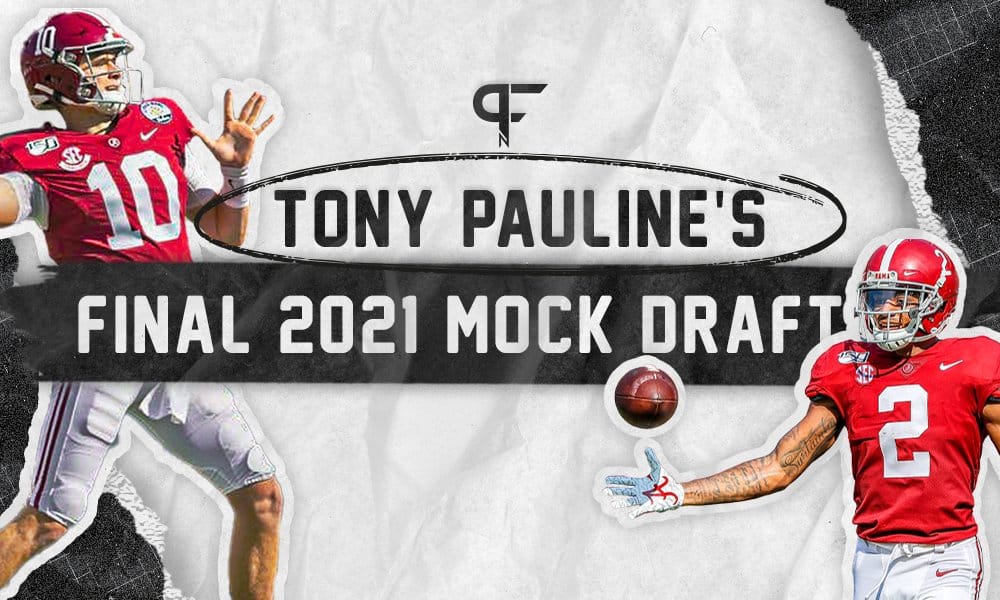 Welcome to my trade-free 3-Round 2021 NFL Mock Draft one day before the 2021 NFL Draft officially begins. My notes on each player include what I’m hearing league-wide on the direction teams may be headed and other options that should be considered.

Let’s kick off the draft with two selections that are nearly set in stone.

The Jaguars select the best quarterback to enter the draft since Andrew Luck. Trevor Lawrence is a true franchise passer with limitless upside.

After trading Sam Darnold just a few weeks ago, Zach Wilson is the perfect quarterback to run the offensive system the Jets intend to implement.

The inability to sign a veteran quarterback such as Andy Dalton in the offseason creates the need for an NFL-ready quarterback. There’s a slight chance this pick is Trey Lance, who, in my opinion, is the better choice. Nevertheless, the 49ers select Mac Jones with the No. 3 pick.

The Falcons would love to move this pick, but that won’t be easy. A quarterback will be considered here, but many expect the Falcons to be bad enough in 2021 to own another top-five selection next April — a selection that will presumably be a signal-caller. As such, Atlanta takes the best offensive weapon on the board in Kyle Pitts.

I disagree with this pick and believe it should be Penei Sewell. However, the word in the league is Ja’Marr Chase is the Bengals’ guy.

With Pitts unavailable, the value of Penei Sewell trumps the determination of some in Miami’s front office to stay away from opt-outs. I expect Jaylen Waddle to get consideration here as well.

The Lions have had a splendid offseason, and despite revamping their entire receiver position, they still need a lot of help. Expect the Lions to try and trade out, but DeVonta Smith will be in the discussion if they don’t.

Scott Fitterer comes from Seattle, a team that likes athletic and somewhat undersized left tackles — exactly what Rashawn Slater is. The Panthers will look to trade out, and if you believe reports, they have the groundwork for a deal near completion.

Jaycee Horn could be the pick here as the Cowboys are 50/50 on him vs. Patrick Surtain II.

His instincts concern me, but general manager Dave Gettleman needs to win now, and Micah Parsons is an explosive athlete who fills a need on defense.

Kwity Paye will get heavy consideration here as the Eagles view him as a Brandon Graham clone. In the end, Jaylen Waddle’s speed and athleticism are too much to pass up — assuming he’s available.

The offensive tackle-needy Chargers take the next best tackle available in Christian Darrisaw. They could move up a few spots for Slater or Sewell if either starts to drop.

The Vikings prefer Darrisaw but need help at both guard and tackle, positions Alijah Vera-Tucker can play.

The Patriots want to come away with a quarterback, whether it’s a trade up for Trey Lance/Justin Fields or a trade down for Davis Mills.

Horn will get a lot of looks at this spot if he’s available, but everything I’ve heard the past two weeks points to Zaven Collins being the selection.

Damon Arnette, who was a reach in the middle of the first round a year ago, has one foot out the door. It is reasonable to expect the Raiders will add depth to their secondary, and they do just that by drafting Jaycee Horn.

Kwity Paye is getting hot at the right time and could end up in the top 15.

I wanted to stick an offensive tackle in this slot, but any prospect at that position would be a reach over Jeremiah Owusu-Koramoah. He’ll be an excellent fit for Rivera’s defense.

Surprise, surprise. The Bears want a deep threat and are trying to part ways with Anthony Miller. Elijah Moore is graded as the fourth receiver on several boards around the league.

Azeez Ojulari is a big-time talent with star potential and fits the edge-rushing need for the Colts. If the medical flags are too much for Ballard and the Colts, I’m told the pick could be Liam Eichenberg.

Offensive tackle will be considered at this spot, but the Titans have a significant need at receiver. Thus, Rashod Bateman comes off the board at No. 22.

This selection can go many ways — cornerback, running back, or edge rusher. Teven Jenkins upgrades the Jets’ right tackle position, although there are a few red flags that teams will look into.

They made a mistake passing on J.K. Dobbins last April. Najee Harris is a natural fit and a Day 1 starter.

Jacksonville will ponder Caleb Farley at this spot, as cornerback is the more immediate need. Additionally, I’m told the Jaguars are not worried about his back. At any rate, Trevon Moehrig is who I have Urban Meyer and company taking with their second first-rounder.

The Browns are an organization on the upswing, and Jamin Davis, a player with tremendous upside, helps complete their defense.

Jaelan Phillips’ medical history has to be a concern, but he’s the perfect fit for Baltimore’s defense.

The Saints had a big need at corner even before the recent woes of Marshon Lattimore. They fill that need with Caleb Farley.

A big corner like Greg Newsome may land with Green Bay, but I’m told the Packers love Kadarius Toney and his play-making ability.

After edge rusher, corner is the most significant need for the Bills. As such, they take the best remaining CB in Greg Newsome.

This pick has a considerable amount of risk, but I’m told the Ravens love Landon Dickerson. He fills a need and fits the mold. Let’s hope he can stay healthy.

The Buccaneers have few needs and can afford to go the best player available. That player in this 2021 3-Round NFL Mock Draft is Alabama’s Christian Barmore.

D/ST Rankings and Streamers Week 7: Trust the Patriots in a divisional bout