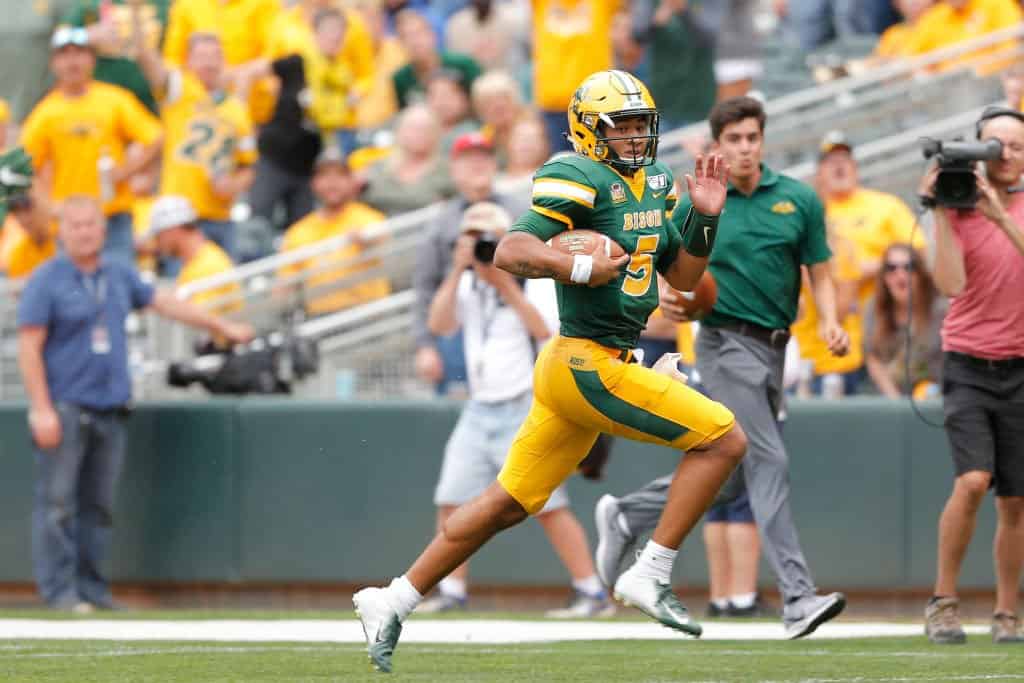 There’s a growing need for quarterbacks who can create at the NFL level. The hyper-productive pocket passers still have some NFL scouts in their corner, but the quarterback who can create for himself is proving to be a better long-term investment. NDSU quarterback Trey Lance is a polarizing 2021 NFL Draft prospect, but few have more potential than he does when it comes to creation.

Positives: Athletic quarterback with next-level physical skills and tremendous upside. Patient in the pocket, keeps his eyes downfield, and goes through progressions. Does a great job commanding and controlling the offense, knows where his receivers are on the field, and spreads the ball around.

Natural looking off the safety, goes to the safe underneath outlet if nothing else is available, and possesses a live arm. Quickly gets the ball out of his hands and gets passes immediately to the intended target.

Easily drives passes downfield, puts air under the ball, and delivers a catchable throw. Gets the ball through tight spots and leads receivers with passes. Sells ball fakes, shows elusiveness, and easily gets outside the pocket to avoid the rush. Loses no velocity throwing on the move and gets rid of the ball with a flick of his wrist. Quick-footed carrying the ball and picks up yardage with his legs. Senses the rush and easily escapes defenders.

Negatives: Marginally accurate throwing on the move. Must be more consistent with his pass placement. Downfield accuracy can be hit or miss. Started just one full season at the FCS level.

Analysis: Lance is the complete physical package at the quarterback position, possessing a tremendous build, athleticism and arm strength. He’s an RPO quarterback with outstanding size and the potential to make all the throws in or out of the pocket. He needs to fine-tune his passing skills, and more than anything else, needs more experience and playing time at a high level of competition.

While I love his upside, I am concerned about the thin body of work Lance has entering the draft and feel the team that drafts him must be patient and even sit him for the 2021 NFL season to let him absorb and process.

Every quarterback has a different path to success. Trey Lance’s path was winding; he didn’t come out of high school with the same attention as other top quarterback prospects.

Lance went to high school at Marshall High in Minnesota. There, he played with the varsity team in his junior and senior years, only elevating to a starting role in his final season.

Lance, then less than 200 pounds, played both quarterback and safety. On offense, he threw for 1,097 yards, 10 touchdowns, and three interceptions in nine games. On defense, he logged 45 total tackles, three picks, and a forced fumble.

As he hit the recruiting trail, Lance’s athletic profile wasn’t fully developed yet, so he failed to attract the desired interest. Only one Division I-A college football team, Northern Illinois, offered him a scholarship. The team on his wish list, the Minnesota Golden Gophers, wanted Lance to play safety. Lance was set on playing quarterback, and so he held out for more offers.

Moving on to the next stage: North Dakota State

In March of 2017, Lance received an offer from the North Dakota State Bison. Right away, the Bison were compelling suitors: they’d recently developed quarterback Carson Wentz into the No. 1 overall pick, and their current quarterback, Easton Stick, was already being looked at as a passer with NFL potential.

Consequently, Lance immediately reciprocated the interest from the Bison. Not long after his offer, he visited the school, and within a year, he’d be set to enroll. By the summer of 2018, he was gearing up for his first college football season as a member of the Bison.

Lance redshirted his first season while Easton Stick closed out his career as the team’s starter. After Stick led the Bison to another FCS National Championship in 2018, it was Lance’s turn to take the reigns in 2019.

As a redshirt freshman, Lance took over the distinguished position of North Dakota State starting quarterback, and he absolutely lit up the scoreboards.

Lance started all 16 games for NDSU and passed for 2,786 yards and 28 touchdowns on 287 attempts while completing 66.9% of his passes. Lance also proved his mettle as a runner, amassing 1,100 yards and 14 touchdowns on the ground, averaging 6.5 yards per carry.

Lance’s all-around production was staggering in 2019, but even more impressive was his ability to limit mistakes. The NDSU quarterback pulled off the remarkable feat of throwing zero interceptions in a given season. His breakout 2019 season not only put him on the map for NFL teams but rendered him a first-round selection in most early mock drafts.

After watching what Lance accomplished in his first full year, many were eager to see what he’d do in the 2020 season. Unfortunately, extenuating circumstances complicated the 2020 season for the NDSU quarterback.

While many FBS teams wound up playing truncated schedules, North Dakota State only scheduled one game: against the Central Arkansas Bears. The game would serve as a showcase for Bison draft prospects, a group headlined by Lance.

Against Central Arkansas, Lance proved himself to be human as a passer, tossing his first career interception. He also only completed 50% of his throws, and the Bears flustered him at times, earning three sacks. But the NDSU quarterback again displayed his ability to elevate an offense amidst adversity.

With his 30 passes, he accumulated 149 yards and found the end zone twice, and he also put up 143 yards and two more touchdowns on the ground, averaging almost ten yards per rush.

Lance’s one-game performance was put under the microscope by default. Some saw his inconsistency in such a crucial game as a red flag. But in such a small sample size, it’s hard to make any resounding judgments. Lance undoubtedly felt the pressure of producing for scouts, but he made the plays that have earned him first-round recognition, regardless.

Despite debate, Trey Lance is worthy of an early 2021 NFL Draft selection

The debate will rage on regarding what Lance’s exact range is in the 2021 NFL Draft. But Lance can quell the doubters with a strong offseason performance. Testing and interviewing well will be key for the NDSU quarterback, and if his career with the Bison is any indication, he should do well in both of those areas.

Above all, Lance is an elite athlete. The NDSU quarterback didn’t put up the same testing numbers that fellow 2018 recruit Justin Fields did in high school, but since then, Lance has developed his explosiveness, speed, and frame density to become a true weapon on the field.

Lance moves with awe-inspiring ease for his 6-foot-4, 226-pound frame. As a runner, he carries a lot of momentum and physicality, and he can explode upfield if given space. As a passer, his mobility allows him to evade pressure and create off-script.

Lance’s arm talent is also quite good and near the top of the draft class.

He has the arm strength to push the ball downfield and hit closing windows outside the hashes. He also has the arm elasticity to mix touch into his throws when necessary, and he can hit different angles with that elasticity. His accuracy can wane at times, but this is largely due to slight mechanical variances.

Lance could be more consistent with his mechanics, as he sometimes plays a bit unhinged and has a tendency to plant his feet too early. But he clearly has a feel for natural mechanical congruity. When setting to throw, he effortlessly settles into a wide base, and his hip rotation is smooth. His throwing motion is crisp and compact, and it allows him to generate consistent velocity.

There will be a learning curve at the NFL level for Lance, however. His NDSU offense helped him structurally, and his lack of experience in 2020 could impact his initial transition to the NFL. But Lance, often regarded as a hard worker and a team leader, should be able to manage. And his upside is well worth the risk.

Clemson QB Trevor Lawrence is the consensus top quarterback, and behind him, Ohio State’s Justin Fields and BYU’s Zach Wilson are often listed as No. 2 and No. 3 in some capacity.

How does he compare to other premier QB talents?

It’s tough to leave the NDSU quarterback out of the top three, but it’s also hard to argue. Wilson has proven himself to be a legitimate franchise quarterback option. And Fields, even despite the debates on his stock this offseason, has more quality tape against quality opponents, and is a similarly elite physical talent.

Nonetheless, Lance is a top quarterback prospect, even if he isn’t part of the class triumvirate. In a vacuum, the key for quarterback prospects is upside. Do they have the potential to warrant such a costly investment? In Lance’s case, the answer is “yes.”

Schematically, who is the best fit for Lance?

In that range, the amount of potential suitors for Lance are limited. However, a few teams come to mind as especially good fits. The 49ers could select Lance at No. 3 overall after trading up. Lance is a very good schematic fit for San Francisco, and he’d also offer the downfield passing ability they lacked with Jimmy Garoppolo.

The Falcons are another potential destination for Lance. He’d fit very well in Arthur Smith’s offense, where his athleticism would allow him to file seamlessly into a versatile, physical running game. If Lance by chance falls out of the top 5, the Panthers and Lions make a lot of sense as well, as do the Broncos.

Ideally, Lance isn’t thrust into action right away, given his background. But Lance’s mentality dictates that he should be ready for whatever challenges he faces. There was a time when Trey Lance wasn’t a college quarterback, let alone a 2021 NFL Draft prospect. He changed the perception once. He can do it again.