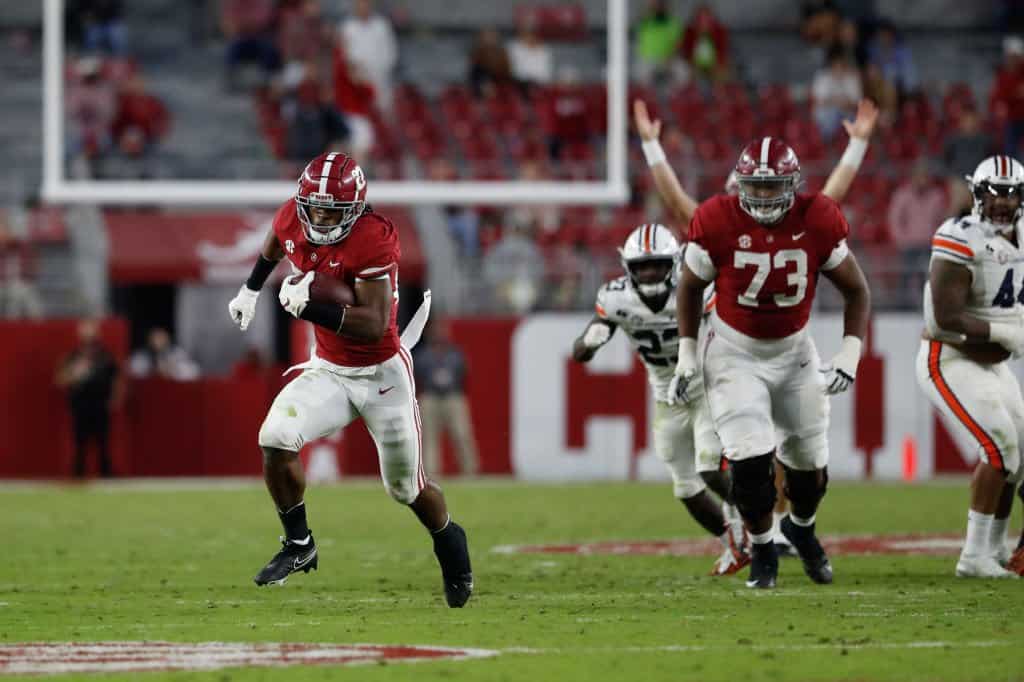 Throughout the draft process, there will be a massive debate among scouts on who the top running back in the 2021 NFL Draft class is, whether you prefer Alabama battering ram Najee Harris or Clemson burner Travis Etienne. Harris’s blend of size, speed, and third-down ability could make him a lethal every-down back at the next level. Is his unique skill-set enough to make Harris the first running back selected in the 2021 NFL Draft?

Positives: Outstanding three-down running back with a complete game. Athletic, instinctive, and plays hard on every down. Possesses outstanding vision, instincts, and overall awareness. Runs with outstanding balance as well as body control. Powerful and has defenders bouncing off him as he picks up yardage off initial contact. Runs through tackles, carries defenders for yards at a clip, and does not go down without a fight.

Possesses outstanding short-area quickness as well as a nice stutter step and makes defenders miss. Patiently waits for blocks to develop, consistently runs north and south, and also displays the ability to bounce around piles. Better-than-average skill running around tackle. Displays himself as a solid downfield pass catcher. Gets vertical and adjusts to the errant throw; makes the reception with his hands. Possesses soft pass-catching hands.

Negatives: Plays to one speed, lacks a burst, and cannot run to daylight. Not a truly creative ball carrier who strings several moves together or takes off upfield cutting back against the grain.

Analysis: Harris is a tremendous ball carrier with a three-down game. Though not overly elusive or creative, he has feature-runner potential at the next level. If your offense likes to keep it between the numbers and not run on the perimeter, Harris is a running back for you.

Being a superstar top prospect is nothing new for Najee Harris. He was widely considered the best player in the country coming out of high school. A consensus 5-star running back, Harris chose Alabama over seemingly every other major program in the country. He wanted to follow in the steps of former Alabama rushers like Mark Ingram, Eddie Lacy, Derrick Henry, and Bo Scarbrough. However, due to Alabama’s talent at the running back position, Harris had to wait before he would regularly see the field.

As a true freshman, Harris finished fourth on the Crimson Tide in carries, but he managed an impressive 6.1 yards per carry, found the end zone three times, and flashed pass-catching skills in minimal opportunities. When he was on the field, his talent flashed; he just wasn’t on the field very often.

In his sophomore year, Harris moved up the depth chart but was still splitting time with Damien Harris and Josh Jacobs. He was the only member on the team to rush for over six yards per carry. With Harris and Jacobs both leaving for the NFL following the 2018 season, Harris was destined for the lion’s share of carries in his first season as a draft-eligible prospect.

As a true junior in 2019, Harris took a massive step in his development as a runner.

He was engaging defenders as opposed to avoiding them. He was finally taking full advantage of his size, and both his vision and conviction were better than ever. Najee Harris became one of the nation’s top rushers and one of the NFL draft’s top running back prospects. What many didn’t expect was that Harris would choose to return to Alabama for his senior season.

While returning for his senior season might have been considered a risk, it was one that paid off for both Harris and Alabama. During 2020, Harris elevated his play in an offense that was comfortably one of the best in college football. Demonstrating every element that helps define brilliance at the running back position. Powerful yet nimble, solid yet athletic, Harris showcased everything from stiff arms to spin moves, jukes to jumping over the opposition. He set career highs for rushing yards, receiving yards, and touchdowns while leading the nation with 30 total touchdowns.

Najee Harris is an interesting NFL draft evaluation because he brings a skill-set unlike really any we’ve seen recently. He’s a massive running back at 6’2 and 229 pounds, nearly the size of Titans’ star Derrick Henry, 6’3, 238 pounds. However, what Harris does that separates him from other big power backs is his amazing work as a receiver. Harris has demonstrated excellent catching ability throughout his career, and he projects as a player you can feature on every play regardless of down and distance.

Running back can occasionally be one of the hard positions to find team fits, but a few destinations make a lot of sense for Harris. One team that stands out is the Miami Dolphins. Miami is home to Harris’ former collegiate QB Tua Tagovailoa, and the team desperately needs an RB1 in the building. Somewhere else that makes sense is Arizona, where Kliff Kingsbury and Kyler Murray are a superstar rusher away from being the NFL’s scariest offense.