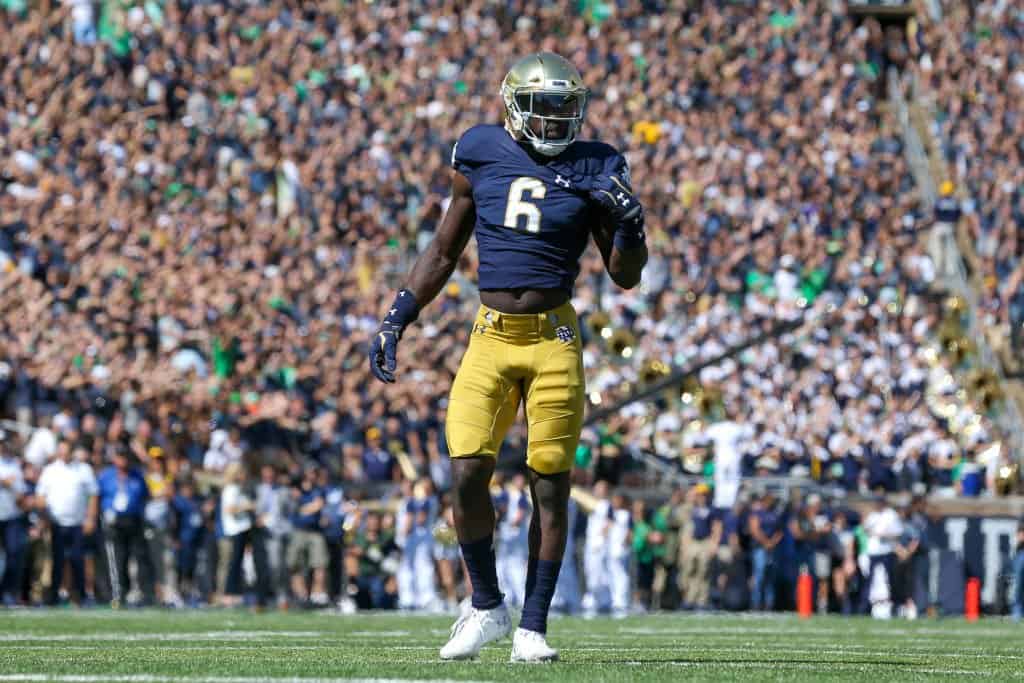 Last year, Isaiah Simmons and Jeremy Chinn were athletic prospects that blurred the traditional lines between safety and linebacker. In the 2021 NFL Draft, that role is filled by Notre Dame linebacker Jeremiah Owusu-Koramoah. How does his draft stock look after a standout 2020 college football season?

Positives: Explosive linebacker with a three-down game. Instinctive, quickly locates the ball, and sells out making plays. Gives outstanding effort, breaks down well, and shows terrific range on the field. Effectively uses his hands to protect himself, plays with force, and possesses a closing burst bearing down on the action. Gets depth on pass drops, works to get his head back around, and shows solid ball skills. Flows well laterally, displays ability in pursuit, and runs ball handlers down from the backside.

Analysis: Owusu-Koramoah was an outstanding linebacker at the college level who got better each season. He lacks classic size, but he’s a one-gap defender who is equally effective in coverage or run defense.

Versatility and athleticism are the hallmarks of Notre Dame linebacker Jeremiah Owusu-Koramoah as he heads to the 2021 NFL Draft. These are attributes that he has carried with him throughout his playing career. The Hampton, Virginia, native played all over the field at Bethel High School. He’s credited with playing running back, wide receiver, linebacker, and safety. He was also a standout on the basketball court, a true multi-sport star.

Wherever he lined up on the football field, he would be the most noticeable. Although not freakishly tall, he is long and rangy. However, what set him apart was his explosiveness. Other players would appear pedestrian as he exploded as if propelled out of a cannon. When the cannonball landed, it hit hard. Tough tackling was another precious attribute at a young age.

During his senior season at Bethel, Owusu-Koramoah racked up 71 tackles, 13 tackles for loss, and 11 passes defended. He also added seven interceptions, six touchdowns, and five forced fumbles. A testament to his ability to play any position on the field, his 247 Sports recruiting profile read: athlete. He was a three-star recruit, the 21st ranked athlete in the class, and 10th ranked player in Virginia.

Despite courting early offers from a group of five schools, he committed to staying at home in Virginia in October 2016. However, late interest from Notre Dame and Michigan State turned his head. He decommitted from Virginia in January, before committing to the Fighting Irish at the very last minute.

Notre Dame linebacker Jeremiah Owusu-Koramoah started his path to the 2021 NFL Draft by redshirting his freshman season in South Bend. Although he wouldn’t see the field, he showed value to the coaches on the scout team. Recruited as an athlete, Notre Dame had a specific plan for him in their 4-2-5 defense. However, he entered a stacked locker room that included future NFL Draft selection Drue Tranquill.

Impressing enough through 2017, Owusu-Koramoah made his Notre Dame debut in 2018. He saw playing time against Ball State and Michigan although he didn’t register any tackles. Just as he was finding his feet for the Fighting Irish, the Notre Dame linebacker had them taken away from him. He suffered a broken ankle in practice, and his season was over.

Over the next two seasons, Jeremiah Owusu-Koramoah would become one of the highest-rated 2021 NFL Draft prospects. Earning a starting spot at the rover position — a hybrid safety/linebacker role — in 2019, he began to showcase the explosive, athletic, hard-hitting abilities that had stood out at Bethel High School.

Becoming one of the best linebackers in college football

In the season opener against Louisville, he set a career-high nine tackles, a figure he would go on to hit on six occasions. Two games later, against SEC opposition, Georgia, he registered 2.5 tackles for loss. He followed that up with a first career forced fumble against his hometown team, Virginia. To end the season in style, he tallied four tackles for loss, three sacks, and a forced fumble in a dominant bowl win over Iowa State.

It was just the appetizer for a dominant 2020 season for the Notre Dame linebacker. He tallied 62 tackles, 11 tackles for loss, three forced fumbles, two fumble recoveries, and 1.5 sacks. In a standout game against Clemson, he thrust himself into the national spotlight with a forced fumble which he recovered for a touchdown as the Fighting Irish shocked a Trevor Lawrence-less Tigers’ team.

Awards reigned down on the Notre Dame linebacker like confetti. He was named the ACC Defensive Player of the Year. Additionally, he was named to the AP All-ACC First Team. Most impressively, he won the Dick Butkus Award as the top linebacker in college football.

Following Notre Dame’s elimination from the College Football Playoff, he announced his decision to declare for the 2021 NFL Draft.

You can’t discuss Jeremiah Owusu-Koramoah’s NFL Draft profile without using the word explosive. There is genuinely no other word to describe him. That same “fired out of a cannonball” expression that described his high school performances has transitioned to the college game.

However, he combines explosiveness with genuine speed. Owusu-Koramoah doesn’t just have short-area quickness. Throughout his college career, he has demonstrated sideline-to-sideline speed. Additionally, he has enough long speed to chase ball carriers down the field.

Speed doesn’t always translate to the football field, however. Therefore, it’s good that he also exhibits good movement skills. He can make rapid changes of direction as required.

Owusu-Koramoah combines those movement skills with football instincts to be an ever-presence around the ball. In the run game, he has the ability to sniff out the ball and find his way to it.

In the passing game, his football instincts help put him in a position to make plays. His experience of playing the safety position is demonstrated by multiple pass breakups. It isn’t a stretch to say that he has the best coverage skills of any linebacker in this class.

Finally, he shows time-after-time a hard-hitting approach to tackling. Owusu-Koramoah may be just 215 pounds, but he can pack a punch. You don’t force five fumbles in your college career without being able to make an impact on your man and the ball.

What are the potential concerns with Jeremiah Owusu-Koramoah?

Although he is one of the best players in the class, there are still some concerns with Notre Dame linebacker Jeremiah Owusu-Koramoah. At 6’1″ and 215 pounds, he doesn’t have the ideal size to play linebacker full time in the NFL. He could benefit to add a little weight to stand up to more physical linemen, tight ends, and running backs.

If he adds that extra weight, he will need to add it without any detriment to his explosiveness and speed.

The other concern is over his usage in the NFL. Although the Carolina Panthers utilized Jeremy Chinn well this last season, the Arizona Cardinals struggled to find the best usage for Isaiah Simmons. Owusu-Koramoah may face those same issues. Ultimately his success will be predicated on finding a team that knows how to use him the best.

So which teams exactly are Jeremiah Owusu-Koramoah’s best fits in the 2021 NFL Draft? He could find himself as a full-time strong safety at the end of the day. However, there is no reason to believe that he couldn’t replicate his role with the Fighting Irish for a team that likes to disguise their defenses.

The New England Patriots are a good fit for the above reasons. Additionally, teams like the Las Vegas Raiders, Buffalo Bills, and Washington Football Team all have linebacker needs. For instance, he can provide blitz and coverage ability for each team.

For me, he is a legitimate first-round pick in the 2021 NFL Draft. In his latest big board for Pro Football Network, Tony Pauline lists Jeremiah Owusu-Koramoah as his number three linebacker. He is also Pauline’s 18th overall prospect, with a borderline first and second-round grade.