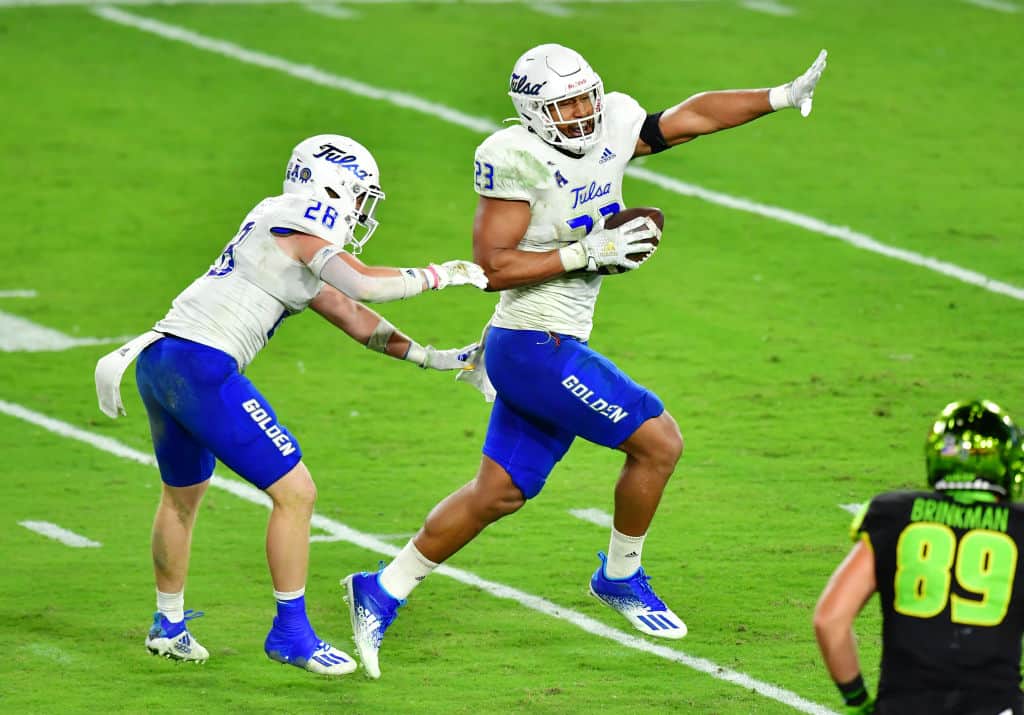 Tulsa linebacker Zaven Collins is one 2021 NFL Draft. prospect who might benefit from the slide of fellow linebacker Micah Parsons. How did Collins become a first-round prospect? And how might he succeed at the NFL level?

Positives: Explosive, game-impacting linebacker who was a three-year starter for Tulsa. Instinctive, breaks down well, and quickly locates the ball handler. Forceful up the field and plays with balance as well as body control. Gives effort defending the run and attacks assignments as well as opponents.

Big, strong, and defeats blocks to make the play. Easily gets back to playing balance off the initial block and quickly changes direction or alters his angle of attack without losing momentum. Terrific pass rusher who bends off the edge with speed. Explodes through gaps to penetrate the line of scrimmage. Very effective making plays in space, fluid moving laterally and shows speed in pursuit. Stays with assignments, possesses solid ball skills, and stands out in coverage.

Negatives: Not overly quick. Occasionally gets caught upfield and out of position.

Analysis: Collins is a game-impacting defender and one of the more understated prospects in this year’s draft. He’s not the small run-and-chase linebacker teams prefer these days. Rather, he’s a throwback of sorts, and possesses the size as well as speed to be a pass rusher as well as play in coverage. Collins is a true three-down defender who should quickly break into a starting lineup and comes with outstanding scheme versatility.

Zaven Collins was one of the best defenders in the NCAA in 2020. However, there was a time when he was lost in the sheer volume of his recruiting class. Labeled as a three-star prospect in the 2017 class by 247 Sports, Collins was outside the Top 2,000 nationally. In addition, he was barely inside the Top 30 in his position group.

Hailing from Hominy, Oklahoma, Collins had the benefit of being close to home. Less than an hour from his hometown was the University of Tulsa. Collins didn’t receive any Power Five interest as a less athletic, 6-foot-4, 220-pound linebacker. But an offer from Tulsa was all he needed. Collins accepted the offer once it came to him, and he enrolled at Tulsa in 2017.

Needing to add weight, Collins redshirted his first season with the Golden Hurricane. It was an expected delay for Collins, but he wouldn’t wait long after that for his chance as a starter.

After serving as a reserve for Tulsa’s first two games in 2018, Collins was elevated into a starting role. He took off with it. In ten starts, Collins logged 85 total tackles, 9.5 tackles for loss, 1.5 sacks, one interception, three pass deflections, a forced fumble, and a fumble recovery.

For his early success, Collins drew consideration as a Freshman All-American, and expectations were heightened in 2019. Collins met those expectations with passion. The Tulsa linebacker started all 12 games, amassing 97 total tackles, 8.0 tackles for loss, 2.0 sacks, three pass deflections, and a fumble recovery. He earned second-team All-AAC honors for his play. As impressive as it was, the best was yet to come for Collins.

In one season, Collins has gone from relative obscurity to legitimate first-round contention. Few players — let alone non-Power Five players — are able to accomplish this.

In eight games, Collins put up 54 tackles, 7.5 tackles for loss, 4.0 sacks, four interceptions, two pass deflections, two forced fumbles, a safety, and a fumble recovery. The Tulsa linebacker also took two of his interceptions back to the end zone and accumulated 156 return yards.

Collins was instrumental in helping the Golden Hurricane to their first winning season since 2016. Not only was he a first-team All-AAC selection, but he also earned first-team All-American honors, alongside Jeremiah Owusu-Koramoah and Joseph Ossai. On December 23, the Tulsa linebacker was announced as the Bronko Nagurski Award winner. The award is given to the best defender in the nation each year. Collins joins a group that includes Aaron Donald, Luke Kuechly, Ndamukong Suh, and Chase Young, as previous winners.

A day after winning the award, Collins announced that he would forgo his final season of eligibility, and declare for the 2021 NFL Draft.

Looking at his physical profile, it’s clear why Zaven Collins is a first-round prospect. Collins is 6-foot-5, 260 pounds, with decent length for his size. He’s also a good athlete. He doesn’t have every athletic trait in the book, but Collins can mold his game around several qualities, most notably his explosiveness.

Collins has excellent stop-and-start ability in short ranges. That explosiveness helps him in several phases on defense. In pass defense, the Tulsa linebacker has enough closing burst to cross gaps and enter passing windows. He’s also fluid with his backpedal.

In run defense, Collins’ burst allows him to shoot through gaps and block off rushing lanes. He can carry his burst around blockers and sear into the backfield. Through this process, Collins has good angle awareness. His physicality and strength allow him to finish plays at the contact point.

Although Collins doesn’t have top-end speed, he has enough to be a threat in pursuit. Additionally, Collins has immense potential rushing the passer. He possesses the size of an edge rusher. His explosion and bend gives some offensive tackles fits.

With his well-rounded skill set, Collins can be a versatile chess piece on defense. On top of it all, he’s a smart, quick processor who reads plays well, and does well with his positioning.

What are the potential issues with Collins?

Collins is an extremely solid prospect. With good size, explosiveness, and awareness, Collins has a skill set helpful to playmaking ability. However, as good as Collins is, he also has some room for improvement with his consistency when choosing gaps. Additionally, one athletic trait is lacking to a degree: His speed.

As mentioned earlier, Collins has an effective skill set in pursuit with his length and closing burst. However, the Tulsa linebacker doesn’t exactly have elite range. His pro day 40-time of 4.67 was better than expected, but it’s still not an elite time. His long speed isn’t a liability, but Collins is more effective in short areas. He doesn’t always have the range to cut players off sideline-to-sideline.

Regardless, there’s a lot to like with Collins. A team that can scheme him effectively will reap the rewards. Collins has more than enough athleticism to supplement his size which he consistently weighed between 264-265 pounds. He’s also urgent, smart, and instinctive. That blend of traits should serve him well in the NFL.

By now, Collins is a bonafide first-round prospect. There is the possibility that he slips into Round 2. However, Collins is highly-rated across the board. His physical traits will likely be valued highly by the NFL. Although he doesn’t have great natural speed, Collins has a lot of other crucial traits. He also possesses elite size for a linebacker. That will undoubtedly help him pass the eye test for NFL scouts.

Additionally, Collins knocked his pro day out of the park. He measured in almost a full inch taller than expected, and he also put up excellent athletic numbers — among them the aforementioned 4.67 40-yard dash, a 35-inch vertical jump, and a 122-inch broad jump. Overall, Collins logged a Relative Athletic Score of 9.54. His combination of size and mobility certainly shows up on film.

The best fits for Zaven Collins partly depend on his range. The Tulsa linebacker likely goes in Round 1. However, beyond that, the possibilities number in the many. Slipping into late Day 1 is a possibility, but teams might also like Collins enough to take him near the top ten.

In Round 1, anyone from the Carolina Panthers and Denver Broncos, to the Washington Football Team, could have interest in Collins. Beyond that, teams like the Tennessee Titans, Pittsburgh Steelers, and Cleveland Browns also profile as excellent fits.

Going to a scheme that utilizes his versatility is key. Not only is Collins scheme-diverse, but he’s also versatile within his role. He can provide value against the pass, against the run, and along the edge. That kind of player can be hard to come by.