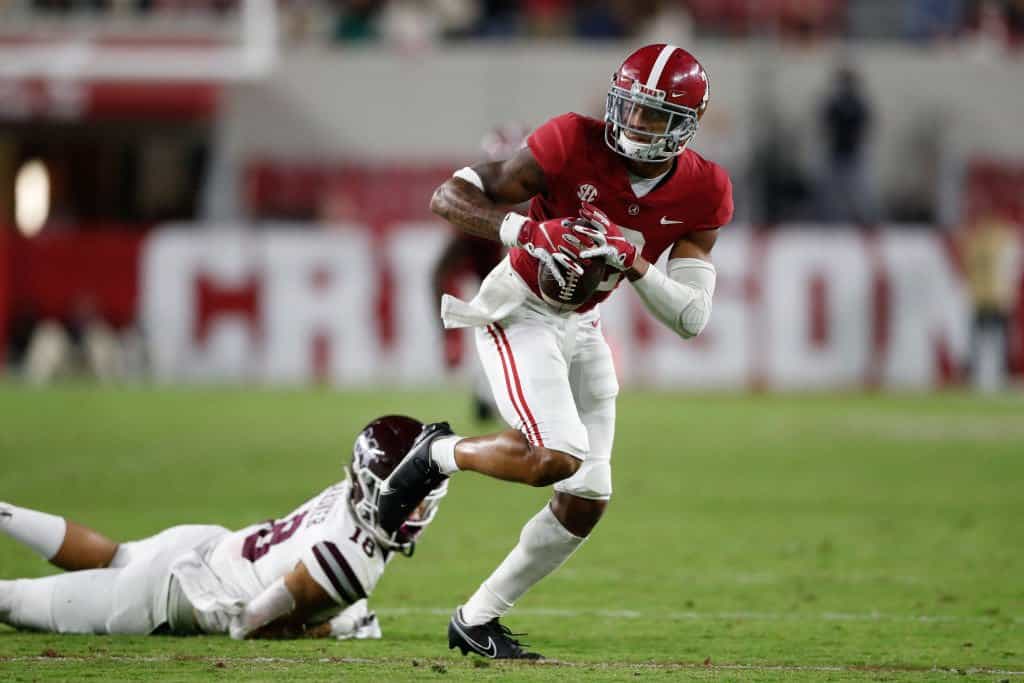 Alabama has proved year in and year out that they are the top NFL factory, and 2021 is no different. The Crimson Tide expect to produce several draft selections in the upcoming draft, with cornerback Patrick Surtain II a favorite to be one of the first Alabama players off the board. Son of former All-Pro cornerback Patrick Surtain Sr., there’s football running through his veins. Patrick Surtain II’s NFL Draft stock is already high enough to be a top-15 selection. Has he played himself into the undisputed CB1 of the 2021 class?

Positives: Large, physical cornerback with a huge upside. Battles opponents at the line of scrimmage, mixes it up throughout the route, and physically beats down receivers to defend the pass. Stays with assignments, remains disciplined, and has a nice move to the throw. Flips his hips transitioning with opponents off the line, effectively covers receivers on crossing patterns, and works to get his head back around and locate the pass in the air.

Gets vertical and battles to defend passes. Rarely challenged by opposing quarterbacks. Fires up the field, possesses a burst of closing speed, and gives effort defending the run. Plays to his size and wraps up tackling.

Negatives: Late reacting to opponents off the snap. Possesses average instincts and gets beaten by ball fakes. Tends to do a bit of face guarding. Better facing the action.

Analysis: Surtain was a terrific cornerback for Alabama the past three seasons. He comes with the size, play speed, and ball skills to start in the NFL. Though lacking polished ball skills, his physical skills and bloodlines lend me to believe Surtain will develop into an outstanding NFL cornerback in the near future.

Growing up the son of a professional football player meant Surtain was constantly around the sport. He developed into one of the top high school players in Florida, a high school recruit powerhouse, and by the end of his senior year, he was widely considered a top-10 player in the country.

Surtain elected to play at Nick Saban’s Alabama and was rewarded with playing time almost immediately. It’s uncommon for a true freshman to see any time in the Alabama backfield, but Surtain managed to play himself into a rotational role in his first year. As a true freshman, he played in 15 games with 37 tackles, one interception, seven pass deflections, and a forced fumble. He was an immediate contributor on one of the nation’s best defenses.

In his second season, Surtain played opposite of 2020 second-round pick Trevon Diggs. They formed one of the most dangerous cornerback duos in the nation, and Surtain became the name to watch in the 2021 cornerback class. In his second year, he played 12 games, registering 42 tackles, two interceptions, eight pass deflections, a fumble recovery, and three forced fumbles. The season affirmed that he was a special prospect, and would ensure he received national attention in his junior season.

Surtain II cements his status as a top tier cornerback

As a result of his reputation, many teams actively sought to throw away from wherever he was on the field. The true sign of a good cornerback is when you don’t hear their name mentioned, and Surtain appeared to be quiet in multiple games. However, when teams did try and test him, he usually had the answers. He put in strong performances against Tennessee and Georgia. Furthermore, he secured a pick-six against Mississippi State.

Despite the successes, there were moments of concern. Surtain had his struggles against a strong Florida offense. Additionally, he was beaten comfortably by Auburn’s Seth Williams whose physical frame is indicative of what he may face in the NFL.

Surtain possesses elite length and a high football IQ, and teams will love the person as much as the player. He projects as a boundary corner who would excel in a more zone-heavy scheme instead of a team that predominantly runs man coverage. However, any team with a need at cornerback should consider him in the first round. If you consider the sweet spot for Patrick Surtain II in the NFL Draft to be the 10-15 range, then teams like the Minnesota Vikings, Philadelphia Eagles, and Dallas Cowboys make most sense.