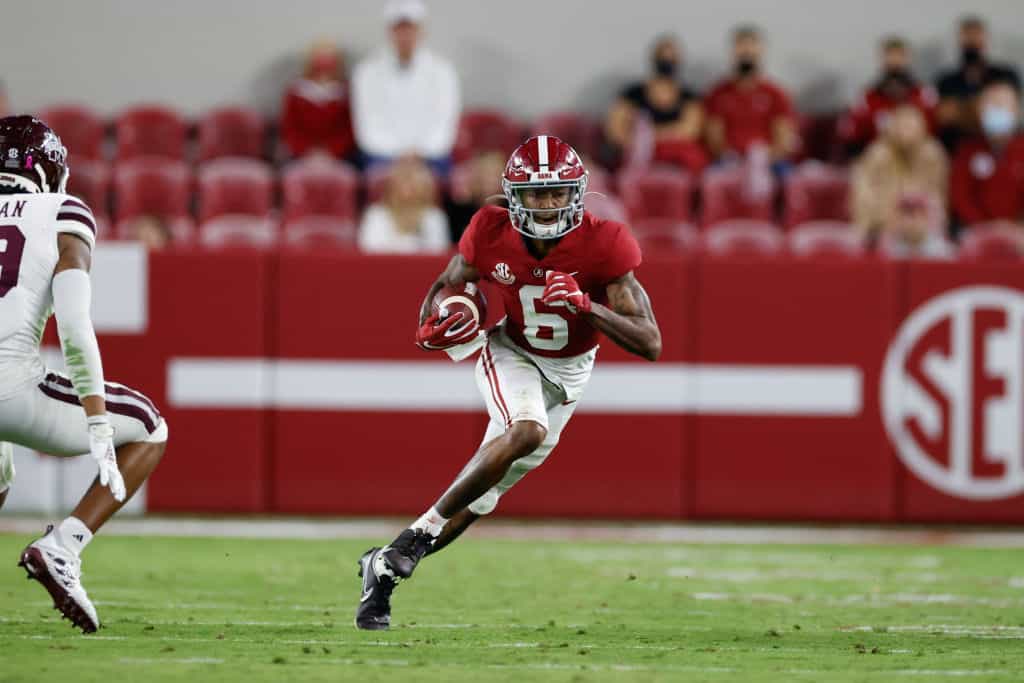 There are certain size standards that are generally accepted based on positional bounds. Prospects who don’t conform to those standards often get marked down. Alabama wide receiver DeVonta Smith, however, is an outlier in the 2021 NFL Draft. While Smith doesn’t meet all the preconceived standards, he produces at an elite pace. How much will scouts value Smith’s pure production, and can he be the first receiver off the board?

Positives: Polished, productive wide receiver who was an unstoppable force for the Alabama offense. Displays outstanding football instincts and awareness, displaying a sixth sense before the pass is tossed in his direction. Quickly releases off the line of scrimmage, fires into breaks, and runs outstanding routes to separate from defenders. Shows excellent route discipline, possesses terrific eye/hand coordination, and consistently extends to make the reception away from his frame.

Exposes himself to the big hit in order to come away with the catch, adjusts to the throw, and is effective running after the reception. Keeps the play inbounds, works to pick up positive yardage, and waits for downfield blocks to develop then follows them. Uses his hands to separate from defenders, displays phenomenal timing, and is very consistent in all aspects of catching the ball. Tracks the pass in the air and easily makes the reception at full speed. Impacts the game returning punts.

Analysis: Smith was incredibly productive for Alabama and is a complete receiver with a polished game for the next level. The lack of size will scare some teams off, and Smith is a scheme-specific wideout. If properly used in the slot or off the line of scrimmage, I believe Smith will be very productive at the next level.

There’s a near-unfathomable level of persistence and detail that goes into transcending physical limitations. If a player doesn’t have elite athleticism or size to fall on, they then must cultivate their own advantages. This is what Alabama wide receiver DeVonta Smith has done.

Smith had the same size concerns when he first entered the college football stage. Coming out of Amite High School in Amite, Louisiana, Smith was just 157 pounds, despite standing at 6-foot-1. Despite his lack of density, Smith managed to earn a four-star rating, as well as plenty of attention from keen-eyed recruiters.

Smith received offers from over a dozen Power Five teams, including blue chip programs like LSU, Florida, Notre Dame, and Georgia. His most compelling offer, however, came from the Alabama Crimson Tide. Smith would accept that offer, hoping to be the next in a long line of NFL Draft prospects developed by Nick Saban’s staff.

Smith was one of three four-star receivers to join the Crimson Tide in 2017, ascending alongside fellow signees Jerry Jeudy and Henry Ruggs III. Smith saw some action as a true freshman, catching eight passes for 160 receiving yards and three touchdowns. In 2018, he continued to flash, logging 42 receptions, 693 yards, and six scores. But it wasn’t until 2019 that Smith would truly break out and become a historically productive receiver for Alabama.

In 2019, Smith emerged, and in a receiving corps that included Jeudy, Ruggs, and electric up-and-comer Jaylen Waddle, Smith distinguished himself as the most consistent receiver in the group. Buoyed by the excellence of quarterback Tua Tagovailoa, Smith hauled in 68 catches for 1,256 yards and 14 touchdowns. By now, defenders were wise to Smith’s unbreakable poise and focus.

But the best was yet to come for Smith, who opted to stay for his senior season while Jeudy and Ruggs went to the draft.

As the only remaining member of the four-star trio from the 2017 class, Smith came into 2020 with heightened responsibility. He took to his increased role well. Some thought that Smith would experience a dip in production after losing Tua Tagovailoa, but with Mac Jones under center, Smith actually accomplished more with less time.

In the 11-game 2020 regular season, Smith logged 98 catches for 1,511 yards and 17 touchdowns. After Jaylen Waddle went down with an ankle injury against Tennessee, Smith took the brunt of the workload, hauling in 53 receptions for 955 yards and 13 scores. Smith somehow made the Alabama offense forget about its most dynamic player, and he did so by simply playing his game.

Ahead of the College Football Playoff, Smith became the official winner of the Heisman Trophy. The last wide receiver to win the trophy was Michigan’s Desmond Howard in 1991. Before that, it was NFL Hall-of-Famer Tim Brown in 1987. By being selected, Smith ended a three-decade drought and put himself in exclusive company.

DeVonta Smith exploited the Ohio State defense single-handedly in the National Championship. The Heisman Trophy winner logged 12 catches for 215 yards and three touchdowns — all in the first half. In 2020, Smith succeeded to a point where NFL evaluators can safely look past his size constraints. Smith is an elite football player, and on Monday, he proved this. Whether you need him to separate, make a gravity-defying catch downfield, or take a dump-off for a double-digit gain, he can get it done. That kind of reliability, at such a high degree, is rare in the NFL.

Smith finished the 2020 season with 117 catches, 1,856 yards, and 23 touchdowns. Now, he moves on to the NFL Draft, where he has a legitimate chance to be the first receiver selected.

Smith cultivates a competitive advantage with detail and unpredictability

DeVonta Smith is such a fun player to watch. That’s not because he dominates with size or speed. He’s just good. Period.

As mentioned earlier, Smith is indeed undersized at the wide receiver position. He has enough length to extend for catches, but at 175 pounds, he’s inherently underweight. Predictably, that’s where most of Smith’s issues arise. He can struggle to fight through contact at times, and bigger, stronger defenders can muscle him when he doesn’t have leverage.

With that being said, Smith does everything he can to mitigate that concern. With any other prospect, that weight would be a massive red flag, but Smith’s playing style makes it almost irrelevant. Smith is incredibly detail-oriented at every level of the rep, and this helps him win, regardless of opposition.

Off the line, Smith has good explosiveness, and he’s also incredibly proactive in using subtle, brisk movements to confuse defenders. Approaching his stem, Smith again has the ability to employ quick head and shoulder fakes to feign his intentions, and his jittery style allows him to keep defenders on their toes.

Smith’s savvy as a route runner is what generates most of his separation, and at the catch point, he caps off the process with nice body control and rock-solid hands.

Smith is a very good athlete, but his athleticism alone doesn’t separate him from defensive backs. What separates him is his high football IQ, toughness, diligence, and microscopic attention to detail. Those are the traits a prospect needs to perform beyond their limitations, and Smith fulfills that requirement.

The 2021 receiver class presents a unique opportunity to view how the NFL will value different archetypes at receiver. Will the NFL prefer the explosive Jaylen Waddle first? Or will they instead favor the contested catch savant, Ja’Marr Chase? What about Rashod Bateman, who produced in spite of bad quarterback play and has the size others lack? And what about Smith? He’s not as fast as Waddle, not as rugged as Chase, and not as big as Bateman, but he just gets the job done, with arguably the most consistency.

DeVonta Smith used the 2020 season to his advantage, as much as he possibly could. He played at a high level week in and week out. Now, he’s not only a near-lock to go in the first round but also a contender for WR1. Smith stays humble through it all; onlookers frequently cite his mindset as the source of his success. While others bask in their production, the Alabama wide receiver is more down-to-Earth. He has a job to do, and he does it. It’s as simple as that.

There exists a market for unbridled consistency in the NFL, and that’s what DeVonta Smith brings to the table, above all else. Teams who need reliable wide receivers immediately will likely be most interested in Smith’s services. Teams like the Miami Dolphins, New England Patriots, Philadelphia Eagles, and Detroit Lions all fit that description. Smith is likely to go within the Top 15 picks, but if he drops due to his weight, teams like Washington, Chicago, Tennessee, and Baltimore might also be interested.

In truth, Smith offers prospective value to over half of the teams in the NFL. How teams value DeVonta Smith ahead of the 2021 NFL Draft is the main concern. His lacking density may limit his projection a bit. More likely than not, however, Smith isn’t worried about his valuation or where he’ll be selected. He’s going to do his job. That’s where it starts. And that’s where it ends.