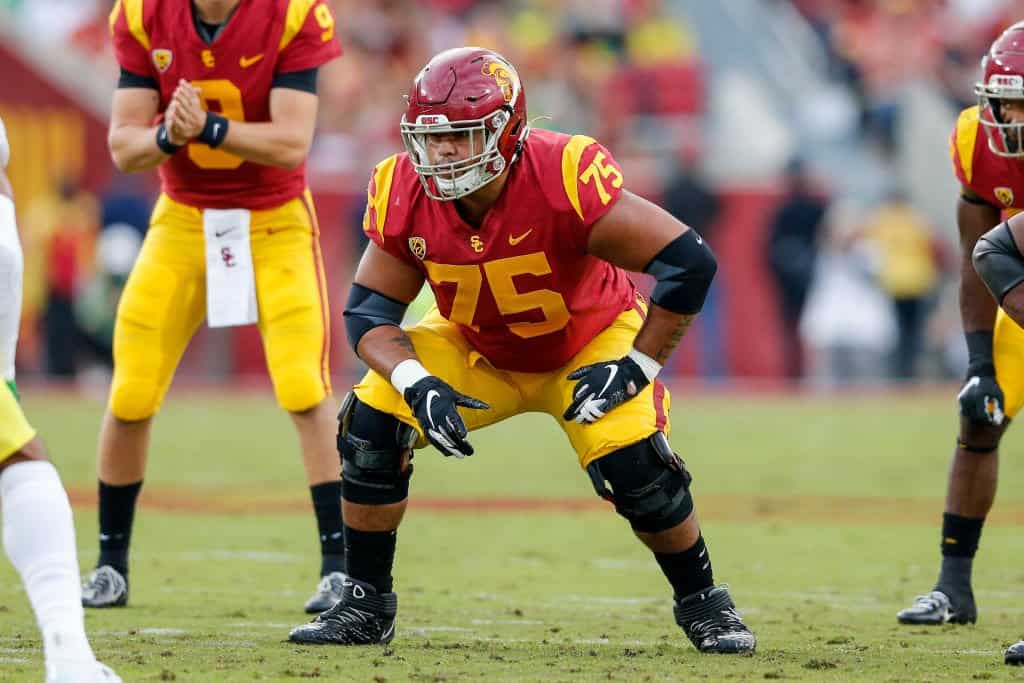 Versatility is a buzz word in the NFL. No player in the 2021 NFL Draft class epitomizes versatility better than USC offensive tackle Alijah Vera-Tucker. Can he parlay that versatility into a first-round selection in April?

Positives: Two-year starter who was used at both guard and left tackle. Fast-rising offensive lineman coming off a tremendous campaign. Plays with good pad level, stays square and consistently gets leverage on opponents. Keeps his feet moving, displays better-than-average footwork off the edge, and rides pass rushers from their angles of attack. Works his hands, blocks with a nasty attitude and attacks assignments. Blocks down well on opponents despite his lack of height. Patient, does not overextend into blocks, and displays outstanding awareness.

Negatives: Better run blocker than pass protector. Does not finish blocks in pass protection. Short for the left tackle position. Occasionally pushed back into the pocket.

Analysis: After initially announcing he would opt out of the 2020 season, Vera-Tucker returned to the field and had a brilliant campaign. He displays terrific footwork, strength as a run blocker, and the tenacity to start in the NFL, though I believe it will be at guard rather than tackle.

USC offensive tackle Alijah Vera-Tucker began his journey to the 2021 NFL Draft at Bishop O’Dowd High School. Thrust onto the football field as a freshman, he immediately felt at home in the trenches. Vera-Tucker showcased his versatility early. He played on both the defensive and offensive line during his high school career.

A four-star recruit by 247 Sports, Vera-Tucker ranked as the 141st player in the nation, the 19th-ranked offensive tackle, and the 13th-best prospect in California. Although he received multiple offers, he committed to USC prior to the start of his senior season.

Vera-Tucker logged 12 tackles and 3 tackles for loss on defense as a high school senior. Showcasing further versatility and athleticism, he blocked a punt on special teams. Meanwhile, he excelled as an offensive tackle as Bishop O’Dowd was crowned Class 5A champions.

Although he is one of the most versatile offensive linemen in the 2021 NFL Draft, there were doubts if Alijah Vera-Tucker would play offensive tackle at USC. Some USC media members considered him a potential defensive lineman. Either way, there was a consensus that he would redshirt his freshman year in 2017.

During 2017, he would gain around 25 pounds, filling out his 6’4″ frame to 315 pounds. With all thoughts of playing on the defensive line behind him, he saw his first action in 2018. Again demonstrating versatility, he played in 12 games on special teams and as the backup right guard.

Vera-Tucker’s college football career at USC exploded in 2019. Switching sides to play left guard, he started all 13 games for the Trojans. Athletic, strong, and adept in both the run game and pass protection, he was voted the USC Offensive Lineman of the Year.

Due to uncertainty over the 2020 Pac-12 season, Alijah Vera-Tucker initially focused on the NFL Draft

However, when the season was confirmed, he opted back in to battle with his brothers one more time. With Austin Jackson departed to the NFL, Vera-Tucker slid across to fill the offensive tackle spot for USC.

Back in his high school starting position, he excelled once again. Starting all six games at left tackle, he received an All-American honorable mention and earned first-team All-Pac-12 honors. More impressively, he was awarded the Morris Trophy, which recognizes the most outstanding offensive and defensive linemen.

The Morris Trophy is prestigious in that opponents vote on it. Pac-12 defensive linemen recognized that Vera-Tucker was the hardest player they faced in 2020. Following the end of the Pac-12 season, Alijah Vera-Tucker declared for the 2021 NFL Draft.

The word versatility has been used multiple times in Alijah Vera-Tucker’s NFL Draft profile. However, I don’t think you can understate it. In the USC offensive tackle, you have a player that could play anywhere on the offensive line. Consider the capitulation of the Kansas City Chiefs’ offense in Super Bowl LV. That demonstrates the importance of offensive line depth. Having one player that can fill multiple roles is invaluable.

Vera-Tucker is an athletic, strong, and smart offensive lineman. He shows great athletic ability in getting out to the second level in the run game. He also moves well laterally in pass protection. The USC offensive tackle has exhibited great strength playing guard against powerful interior defensive linemen. He often showcases a “mauler” mentality in the run game.

In addition to being athletic, Vera-Tucker exhibits great balance and body control. There aren’t many examples where you will find him on the floor. Even if he is initially pushed back by an opponent’s power, he does well to recover. As a result, he is challenging to overpower.

What are the potential concerns with Alijah Vera-Tucker?

There is much to love about USC offensive tackle Alijah Vera-Tucker as an NFL Draft prospect. However, there are a few minor concerns relating to his projection as an NFL offensive tackle. Although he demonstrates good hand speed, there are times where he needs to work on placement. There are examples on tape where he places his hands on the outside shoulder rather than punch inside.

Overall, however, there are few concerns about Vera-Tucker, especially at the guard position.

Back-to-back years with impressive tape at two different positions make USC offensive tackle Alijah Vera-Tucker a difficult NFL Draft projection. He played extremely well at left tackle this season. However, based on his 2019 tape, he would make an excellent guard. Either way, he would fit a team that operates a zone-blocking scheme.

When you think of scheme and need fits, the Los Angeles Chargers, Indianapolis Colts, and Kansas City Chiefs immediately spring to mind. Would he be in reach of those teams in the 2021 NFL Draft? In his latest big board for Pro Football Network, Tony Pauline ranks Vera-Tucker as the 34th overall prospect and second-ranked guard, and has a second-round grade.

That would put Kansas City at the bottom of the first round as a prime location. However, as buzz grows, Alijah Vera-Tucker has a chance of going before then in the 2021 NFL Draft.