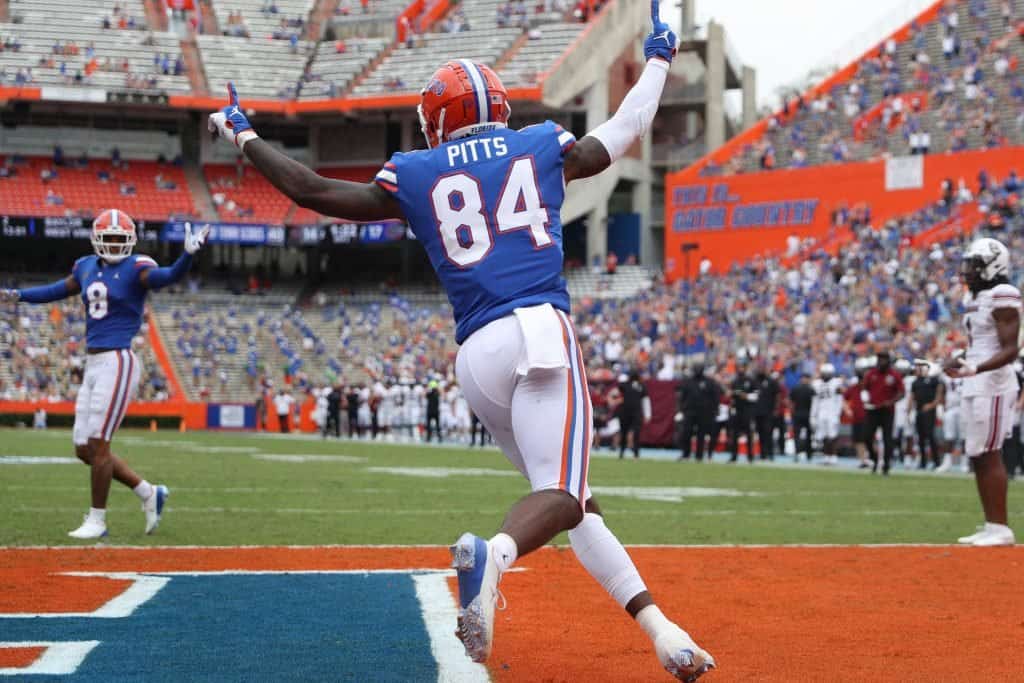 A tight end will never quite have the value of a wide receiver or an offensive lineman from a pure positional standpoint, but tight ends that can create mismatches at the NFL level are precious. That’s the kind of edge that Florida tight end and top NFL Draft prospect Kyle Pitts provides. Pitts is a rare prototype who will create opportunities for one lucky NFL offense in 2021.

Positives: Amazingly athletic pass catcher who’s a receiver in a tight end’s body. Agile, fluid, and a natural pass catcher. Quickly releases off the line into pass routes, extends to make the reception away from his frame, and looks the ball into his hands. Tracks the ball in the air, displays outstanding timing, and comes away with the difficult grab. Gets vertical, adjusts, and climbs over defensive backs to come away with the difficult catch. Displays outstanding focus as well as concentration.

Plays smart football, comes back to the ball, and works to make himself an available target. Runs solid routes for a bigger pass catcher, uses his hands to separate from defenders, and consistently finds ways to come free. Quickly turns upfield after the catch and keeps the play inbounds to pick up as much yardage as possible. Sells routes and easily makes the reception in stride. Gives effort blocking and is very effective blocking at the second level.

Negatives: Must improve his blocking strength. Tends to slow and gather into blocks.

Analysis: Pitts was a dominant tight end who took over games, usually doing so against the opponent’s top cornerback. He has tremendous upside, and rather than playing the traditional tight end position, Pitts has the skill and the ability to be used in a variety of pass-catching roles.

For a long time, the Florida Gators were known for fielding elite defensive units year in and year out. On the flip side, however, they rarely rose past mediocrity on offense. Kyle Pitts was one of the key agents charged with facilitating a shift in tendency. In 2020, he’s ushered in a new era of offensive brilliance for Dan Mullen’s squad.

Pitts has always had the potential, but there was a time when the fanfare didn’t quite match. Coming out of high school, Pitts was one of the top prospects at the tight end position, but he was only a four-star recruit and came in at 154th overall on ESPN’s 2018 recruiting board.

Being a four-star recruit is by no means a disappointment. Still, Kyle Pitts was second to fellow 2021 NFL Draft prospect Brevin Jordan, who plays for the Miami Hurricanes. Before his collegiate career, evaluators chose Jordan over Pitts. In the 2021 NFL Draft, they’ll have a similar decision to make — only this time, Pitts will have the upper hand.

Pitts saw playing time as a true freshman for Florida, catching three passes for 73 yards and a score. Right there, he showed a flash of his big-play ability, and in 2019, his sophomore season, he was unleashed in his entirety. His rise coinciding with an uptick in quarterback play, Pitts became a premier weapon in the SEC, logging 54 catches for 649 yards and five scores.

Even before attaining his draft eligibility, Pitts had become a star on college football’s biggest stage, and his performance in 2020 showed that he’s far from finished.

Week in and week out in 2020, Kyle Pitts’ presence alone unsettled defenders. Acrobatic catches and spider-like snares became expectations for the Florida tight end, and his performance has him listed as a near consensus Top 5 prospect. Pitts produced with absurd efficiency in 2020, hauling in 43 passes for 770 yards and 12 touchdowns. This should only be a hint of what’s to come.

Genetically, Kyle Pitts is an absurd athlete. Kyle Pitts measures in at 6-foot-6, 245 pounds, but he moves with the grace and the suddenness of a wide receiver, not a tight end. He has excellent change-of-direction skills, and he also shows impressive nuance with his route running. His explosiveness out of breaks is also top-tier for his position, allowing him to generate ample separation against linebackers.

Pitts also maximizes his size-athleticism combination with impressive toughness, ball tracking ability, and body contortion capacity; he can make inaccurate passes accurate with his wingspan and flexibility. He can contort to accommodate those kinds of passes with insane quickness and balance.

If you place an increased emphasis on blocking at the tight end position, you may desire more from the Florida star. Pitts is somewhat inconsistent in that area and doesn’t have the strength or density to be a force. But as a receiver, which is the primary function of tight ends in the modern NFL, Pitts has elite size, athleticism, and the over-arching versatility to be a matchup nightmare anywhere from the line of scrimmage to the boundary.

In truth, any team would likely benefit from Pitts’ presence in their offensive cast. Yet, not every team will have the opportunity to select Pitts in the 2021 NFL Draft. At this point, it’s unlikely that Pitts falls outside of the Top 10, and if he does, he won’t fall far beyond that. Pitts is listed as a tight end. However, he’s truly a position-less unicorn, for whom “weapon” would be a more accurate designation.

Pitts would likely perform best if he goes to a team that targets TEs often and moves around TEs to utilize their versatility best. Plenty of teams have a baseline need for a player like Pitts. However, creative offensive minds would have a field day sifting through the mismatches that Pitts provides. Nevertheless, only so many teams will have a chance to add Pitts, so the possibilities are limited.

In the early first round, teams like the Dolphins, Bengals, Giants, Panthers, and Cowboys all have reason to consider Pitts. But if he somehow slips due to his positional designation, teams like the Cardinals, Chargers, and Washington would also be nice destinations for him. Simply put, Pitts is an elite offensive weapon who checks almost all the boxes as a versatile mismatch and perpetual playmaking machine. Players like Pitts are rare, and they never last very long in the draft.