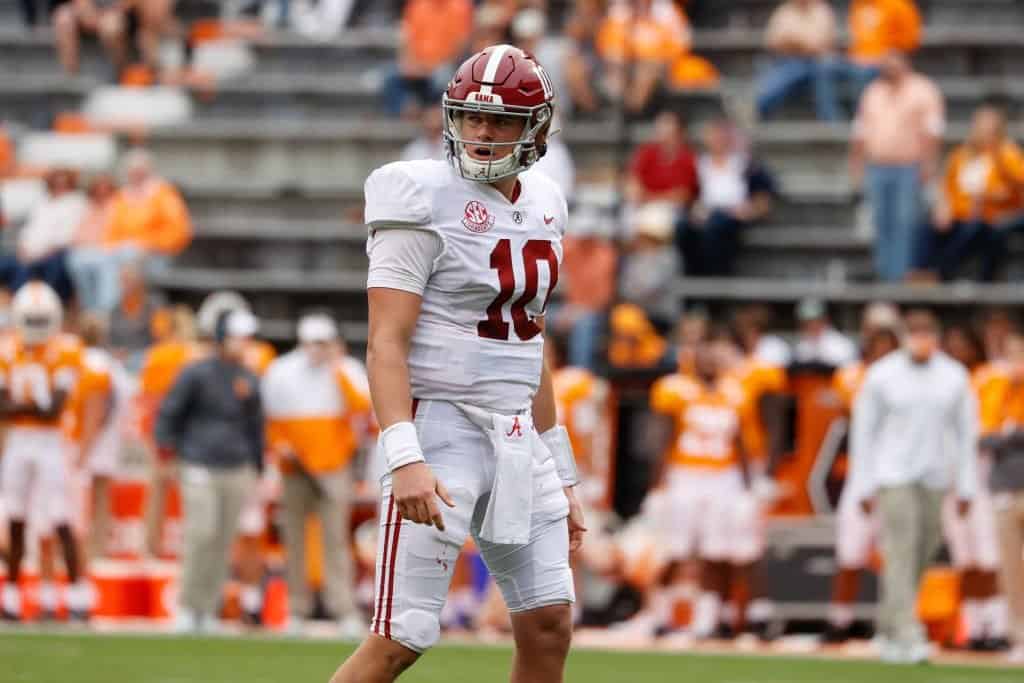 The highest-echelon quarterbacks are ultimately the ones who see teams clamor for their services in April each year, but there exists a stable market for signal-callers in the tier below as well. Alabama quarterback Mac Jones, a fast-rising NFL Draft prospect, has traits that fit in both categories. He doesn’t quite have the physical upside of other top prospects. Nevertheless, his best traits have him in the same conversation as Justin Fields, Zach Wilson, and Trey Lance. Where will Jones ultimately end up in the 2021 NFL Draft?

Positives: Poised and tremendously smart quarterback whose game has been on a straight shot north since November 2019. Patient in the pocket, buys time for receivers, and displays tremendous sense and wherewithal of what’s happening on the field. Goes through progressions, distributes the ball to all his targets, and takes the safe underneath outlet if nothing else is available.

Nicely sets up screen passes, throws a catchable ball, and displays a sense of timing on passes. Accurate, does not have receivers waiting on the ball. Shows great pass placement, putting throws where only his receiver can make the reception. True field general who does a great job commanding and controlling the offense.

Negatives: Lacks great arm talent and cannot drive passes downfield. Doesn’t pick up much yardage with his legs nor is he effective on designed runs. Has a thin body of work at the college level.

Analysis: Jones did a solid job after taking over for the injured Tua Tagovailoa in November 2019, then watched his game take off last season. After winning the national title with Alabama in January, Jones was sensational during all three days of Senior Bowl practice. He’s not the RPO quarterback many like today, rather he’s a traditional pocket passer with a great feel for what’s happening on the field who does an outstanding job protecting the ball.

An injury prevented Mac Jones from playing in the Senior Bowl game, but he left practice week with nothing left to gain. Jones needed to prove he could succeed without his supporting cast at Alabama, and he did a good job working toward achieving that in Mobile.

Although there was inconsistent quarterback play around him, Jones didn’t simply look good by virtue of comparison. Jones himself was accurate, decisive, and consistent all week. The reservations surrounding his upside will remain, but after his Senior Bowl showing, there’s remains little doubt that Jones will go off the board early in the 2021 NFL Draft.

Few can say they quarterbacked the legendary Alabama Crimson Tide, but that’s a distinction Mac Jones can boast with pride. Interestingly enough, he wasn’t one of the most coveted quarterback prospects in his recruiting class. Still, a solid player, Jones was only the 17th-best quarterback in the 2017 class, behind other less appealing college passers such as Hunter Johnson, Sean Clifford, Jack Sears, Dylan McCaffrey, Tommy Devito, and Chase Brice.

Jones would ultimately redshirt his first season with the Crimson Tide, and in 2018, he saw minimal action, throwing just 13 passes, of which he completed five for 123 yards and a touchdown. The emergence of Tua Tagovailoa prevented Jones from challenging for the starting role. Still, in 2019, after Tagovailoa suffered a season-ending hip injury, Jones was thrust into the spotlight, suddenly taking on the helm of one of college football’s elite offensive units.

Jones only threw more than ten passes in five games with the Crimson Tide in 2019, but he did enough to earn some notoriety nationwide, completing 97 of his 141 pass attempts for 1,503 yards, 14 scores, and just three interceptions. After Tagovailoa entered the 2020 NFL Draft, Jones retained the full confidence of head coach Nick Saban and entered the 2020 season as the unquestioned starter.

The performance of Jones down the stretch in 2019 earned him respect in college football scouting circles. Still, he wasn’t legitimately considered an ascending 2021 NFL Draft prospect until he carried over his success into the 2020 season. Jones somehow took his efficiency numbers to new heights in 2020. His level of play convinced scouts to dive deeper into his physical pallet of traits, to assess whether or not he can be a viable starting quarterback at the NFL level.

Jones is smart, competitive, and has adequate throwing tools. The questions remain surrounding his athleticism and elevation ability, however. He received stellar protection from his line over the entire season. He also had the best supporting cast in college football by far. When he has to evade rushers and keep plays alive, Jones’ ability ends with his pocket awareness. Once the pocket breaks, Jones doesn’t have the athleticism to extend consistently, and that lack of creation ability is a cap on his upside.

Nevertheless, the distributor mold at quarterback is still alive and well, even if it’s fading. Jones has potential within that prototype. The Alabama quarterback completed 311 of 402 passes for 4,500 yards, 41 touchdowns, and just four picks in the 2020 season. With the depth of the 2021 quarterback class in question, Jones is easily a top five quarterback. And depending on how teams view his upside, he could be an early first-round pick.

There’s not much one can do about Jones’ middling athleticism. Still, if he can continue to perfect the mental part of his game and continue to time his throws effectively while maintaining good mechanics, he could have a future as a starter. It’s not a perfect comparison, but certain habits of Jones’ remind me of current Vikings quarterback Kirk Cousins.

Both quarterbacks are a little on the lean side for the position, and both are average to below-average athletes who don’t often create for themselves in off-script situations. But like Cousins, Jones has a crisp plant of his back foot, and he’s very reliable in pocket mechanics and pocket poise. Both Cousins and Jones fit the facilitator mold at quarterback, but Cousins and many others have shown that facilitators, while not the preferred mold in the modern NFL, can be productive starters.

When Jones has to force throws downfield off-platform, that’s when he’ll see those throws fall short. But when his base is set, and his upper body is loose, he can crank throws downfield with pace. Much of that is the same with Cousins, who can generate surprising velocity when he’s in rhythm while not equipped with elite tools.

The similarities to Cousins might seem underwhelming at first. However, Cousins was ranked as the sixth-best quarterback in 2020, according to Pro Football Network’s Offensive Value Metric. Despite poor game scripts and inconsistent defense, he rebounded from a slow start and helped Minnesota return to playoff relevance. Mac Jones will have more to prove once as he approaches the 2021 NFL Draft, but there’s a path to success for him.

It’s important not to scout the helmet; every passer is different. But it is a known fact that sometimes, talent at a school can disguise a quarterback’s shortcomings. Jones might not be the best example, as he does have some redeeming traits. Nevertheless, his problems could be exacerbated by added pressure in the NFL. Thus, Mac Jones’ NFL Draft projection becomes a little more complicated.

Jones’ athletic limitations and off-script inconsistencies collectively cap his upside. However, he produced a lot of good tape in 2020, and proved himself to be a high-level distributor with enough smarts, arm crispness, and accuracy to be a starting NFL quarterback. From a pure talent perspective, he shouldn’t challenge the top four quarterbacks in the NFL Draft, but he’s a safe bet as a surefire first-round QB, and he could ultimately go as high as the top ten.

The best fit for Jones would be a team that can provide him adequate support in year one. Teams like Carolina or San Francisco could be willing to pick Jones, depending on their separate evaluations. Denver also makes a lot of sense, if they deem Drew Lock an irreconcilable project. The Broncos have the weapons and the protection needed to incubate Jones early. With the demand for quarterbacks so high, Jones will no doubt go off the board early. And in the right situation, he has the smarts and operational prowess needed to thrive.