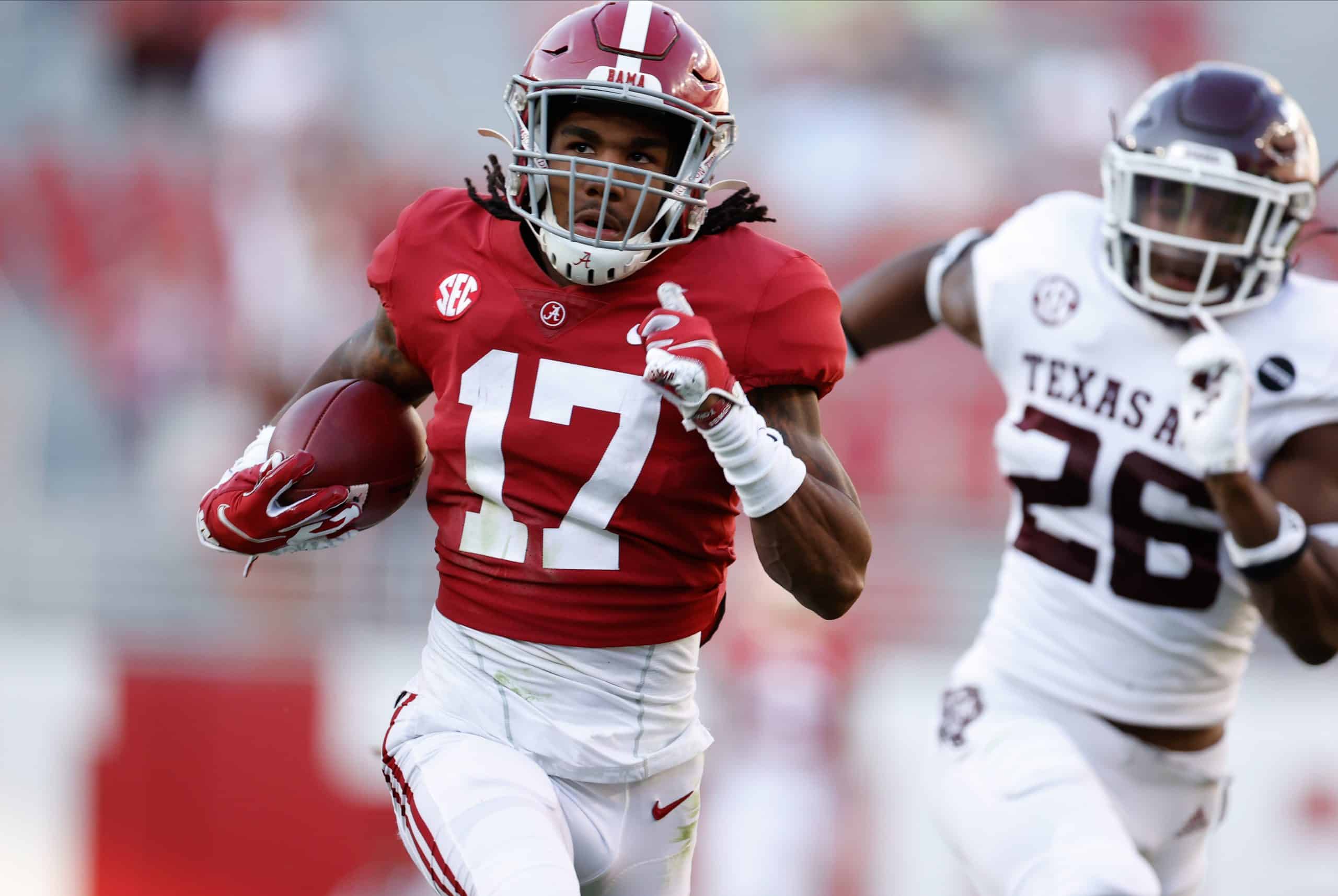 As the cream of the crop in the college football landscape, it is no surprise that Nick Saban’s Alabama Crimson Tide produces elite talents every year. Looking around the NFL as it stands today, at just about every position, you will find prominent Alabama alumni that are impressing in the NFL. Julio Jones, Josh Jacobs, Marlon Humphrey, Minkah Fitzpatrick, Dont’a Hightower, and other stars dot the NFL horizon. This year, Alabama has two wide receivers coming out, and Jaylen Waddle is one of those players who is slated to hear his name called at the NFL Draft.

However, almost as impressive has been the Crimson Tide’s recent streak of producing NFL WR’s. Just last year, Jerry Jeudy and Henry Ruggs both became first-round picks. Not too long ago, Calvin Ridley was a first-round pick. Amari Cooper and the aforementioned Jones are just some other Alabama receivers to come out in recent years. Now, Waddle finds himself in a position to be the next.

Positives: Game-changing receiver with a second gear. Fast off the line of scrimmage, immediately gets to top speed, and almost always gets a step or two on defenders in the initial 10 yards. Displays route discipline, easily makes the reception in stride, and adjusts to make the deep catch at full speed.

Gets vertical over defenders and effectively times receptions. Tracks the pass in the air and consistently catches the ball with his hands away from his frame. Explosive return specialist who instantaneously alters the momentum of games with big plays. Shows terrific run-after-the-catch skill.

Negatives: Not a stout skill player and gets easily brought down at the point by a single defender. Struggles in battles.

Analysis: Waddle is an explosive skill player and a lethal force any time the ball is in his hands. He was well on his way to developing his game before sustaining an ankle injury last season, yet he still showed great progress on the field. The lack of size may be a limiting factor, but the speed and pass-catching skill displayed the past two years will lead anyone to the conclusion that Waddle offers big-time potential at the next level.

In the loaded terrain that is Texas High School football, Jaylen Waddle emerged as someone who was different. His natural speed and explosiveness stood out. It was clear even with other Division-I talents around him that Waddle was special. A consensus four-star prospect, Waddle was the fifth-ranked receiver in the 2018 recruiting class and 39th overall player.

In his high school career, Waddle suited up for legendary Texas football coach Steve Leisz at Houston Episcopal. He was a three-sport athlete, as he played basketball and did track as well.

Under the guidance and teaching of Leisz, Waddle worked his way up the ladder. Thus, earning himself an invitation for the U.S. Army All-American Bowl. Earning offers from all over the country, Waddle had his choice of any college he wanted to attend.

Waddle ended up choosing Alabama, thus shunning other in-state schools that recruited him heavily, including Texas A&M. All that meant was that Waddle would face stiffer competition for him. That is, given the elite talent that Alabama routinely brings in with their recruiting classes. Early playing time would not come easy for Waddle as he headed to Tuscaloosa.

Still, Waddle was up to the task. With elite natural tools and a relentless work ethic that came to him easily, he went into summer camp and impressed the coaches in no time. By the time their season opener rolled around, Waddle had worked himself up to fifth on the deep depth chart. Given Alabama’s rotation of receivers, that meant Waddle was eventually bound for playing time. As the season went on, his playing time only increased.

In 2019, Waddle’s dynamic explosiveness was on display as the true freshman caught 45 receptions for 848 yards and 7 touchdowns. All in all, he put up an elite 18.8 yards per reception that showcased his big-play ability. Waddle’s explosive coming out party was against Lousiana, where on three receptions, Waddle posted 138 receiving yards and 2 touchdowns.

He would have two other games where he eclipsed the century mark against Tennessee and Georgia. His showing against Georgia on the national stage was when people started respecting Waddle’s special speed.

Sophomore season the sign of special things to come

As a sophomore, Waddle was still buried on the depth chart. Jerry Jeudy, Henry Ruggs, and DeVonta Smith, would all get the starting jobs over him while Waddle was subjected to just a role in the slot as a deep threat. His stats took a hit with less playing time than before. However, Waddle proved to be valuable as a punt and kick returner. There his athletic skills and elusiveness were on full display.

An enthralling 77-yard punt return touchdown against LSU was a play where Waddle made something happen out of nothing. Even with less playing time, by the end of the year, Waddle had scouts foaming at the mouth to see how he could raise his NFL Draft stock heading into a bigger role in 2020.

Explosive season fizzles out with injury

Looking back at a season where teammate DeVonta Smith grabbed all the accolades, it’s easy to forget who the dominant Alabama receiver was over the first four weeks of the year. Waddle bolted out of the gates against Missouri like a rodeo bull released from the trap. With 134 receiving yards and 2 touchdowns from 8 catches, the year couldn’t have gotten off to a better start.

Yet, Waddle continued to produce more and more dazzling displays. The following week, against Texas A&M, he’d take 5 catches and turn them into 142 yards at 28.4 yards per catch. Although he wouldn’t get a touchdown against Ole Miss he still racked up 120 yards on 6 catches. In what would prove to be his final major contribution of the season, he tore apart a Georgia secondary that is sending five players to the NFL Draft to the tune of 161 yards and a touchdown.

Unfortunately, Waddle’s season would suffer a premature end against Tennessee. Waddle suffered a fractured foot on a kick return that would require surgery. Although he returned in the national championship win over Ohio State, his best football for Alabama was in those first four games of the season.

Following the season, Jaylen Waddle declared for the 2021 NFL Draft alongside a sizable portion of Alabama’s championship winning team.

There are honestly very few teams where Waddle would not fit. Elite deep threats that can still attack all three levels of the field are easy to mold into most systems. So, a relative best fit is somewhat tough. Still, stability, quarterback situation, and surrounding talent are key factors when considering where Jaylen Waddle best suits to land in the 2021 NFL Draft.

Realistically, Jaylen Waddle is heading toward being a top-10 pick in the 2021 NFL Draft. So, while a team like the Buffalo Bills would be a dynamic and electric fit with the strong arm of Josh Allen and the threat of Stefon Diggs opposite of Waddle, it just feels unrealistic. Still, the thought of this fit is so much fun and perfect with Brian Daboll there that it makes too much sense.

The Miami Dolphins have to be an attractive spot for both sides of this equation. Firstly, Waddle would be reunited with his former quarterback Tua Tagovailoa. Secondly, although they signed Will Fuller in free agency, Waddle brings an element of speed that was missing from the Dolphins offense last year. It would be a mistake to allow the signing of Fuller to become the reason for not drafting Jaylen Waddle, especially given Fuller’s injury history.

With what they are trying to build in South Beach, Waddle immediately makes that offense harder to defend, even for New England Patriots head coach Bill Belichick.

Cincinnati Bengals and other teams

The Cincinnati Bengals are also a fit that I like quite a bit. With John Ross not working out and A.J. Green departed, the Bengals are looking for a true compliment and perhaps even alpha receiver to pair alongside Tyler Boyd. Joe Burrow would love a speed demon that can stretch the middle of the field and force more two-high looks. Not only would that put Boyd out in the middle of the field, but it would help open up holes for Joe Mixon as well.

Other realistic teams that should have Jaylen Waddle on their NFL Draft radar are the Washington Football Team, New York Giants, New York Jets, Detroit Lions, and the New England Patriots. Pairing Waddle with Cam Newton would be dynamite. However, it feels unlikely that he falls to 15th overall in the 2021 NFL Draft.

However, all of the other teams listed above are wide receiver needy teams who could use some help. A great prospect like Waddle can only bolster their groups.