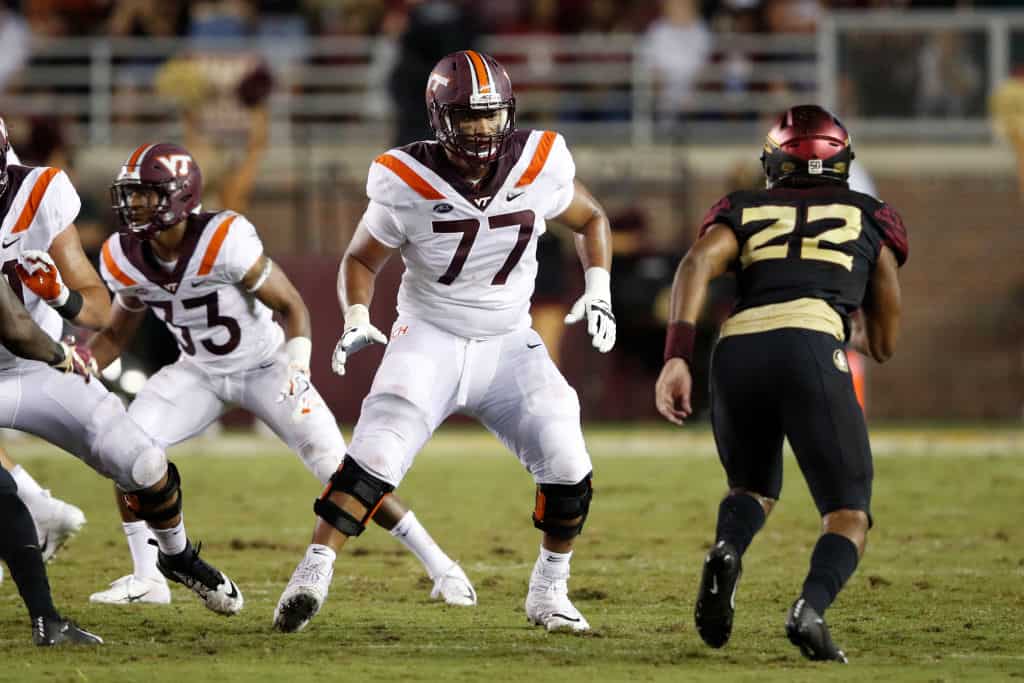 Positives: Athletic, explosive offensive tackle who stands out in pass protection and blocking for the run. Sets with a wide base, works to bend his knees, and stays square. Patient in pass protection, keeps his feet moving, and makes exceptional use of angles. Correctly places his hands into defenders and easily rides them from their angles of attack.

Explosive at the point, knocks back defenders with violent hand punch and drives opponents from the line run blocking. Quick out to the second level and shows ability blocking in motion. Bends his knees and plays with proper pad level.

Negatives: Slow picking up blitzes and overextends on occasion. Struggles to adjust. Lacks quick, fluid footwork off the edge.

Analysis: Darrisaw was a terrific tackle at Virginia Tech the past two seasons and showed a lot of progress in his game during the 2020 campaign. He’s a devastating run blocker who holds his own in pass protection, and I believe he offers possibilities at left or right tackle in the NFL.

Despite reported interest from some bigger programs, his only confirmed offers were from Morgan State, North Carolina Central, and Central Connecticut. Concerns over his academics ensured that bigger programs never progressed their interest into firm offers.

Except for Virginia Tech. The Hokies were Darrisaw’s only Division I offer. He committed in November 2016. Before he would get to represent Virginia Tech in Blacksburg, however, Darrisaw would spend time at Fork Union Military Academy.

No one could have foreseen the immediate impact that Christian Darrisaw would make at Virginia Tech. The freshman would start at left tackle in Week 1 against Florida State. Although an injury saw him miss a game, Darrisaw started every game during the rest of his first college football season. He excelled too.

It was just the start for Darrisaw. As a junior, he was voted to the Athlon Sports All-ACC Second Team after starting 13 games at left tackle. Behind his leadership, the Virginia Tech rushing offense improved. Although they were small improvements, Darrisaw’s development benefited the entire offensive line.

Christian Darrisaw’s NFL Draft stock soared during his junior season. As Virginia Tech emerged as one of the most potent rushing offenses in the nation, attention turned to his influence. His strength and mobility combined to provide an effective roadblock for Khalil Herbert and dual-threat quarterback Hendon Hooker.

Following a successful season, Christian Darrisaw declared for the 2021 NFL Draft on December 18.

Let’s start with his size and length. At 6’5″ and 314 pounds, he already has the build of an NFL offensive lineman. Since arriving at Virginia Tech, he has gained around 15-20 pounds. Thankfully, this gain has been without any clear drop off in his athletic traits. In addition to being physically imposing, Darrisaw also appears to have great reach. He puts this to good use at the line of scrimmage.

His ability shows by way of lateral movement. It is also clear that he can get out to the next level when run blocking. There are multiple examples on tape of Darrisaw taking care of his man at the LOS. Then, he advances downfield to help extend the run play. It is one of the reasons that Virginia Tech has been so good at running the football in 2020.

Darrisaw shows good play strength from both his lower body but also in his hands. This helps him to anchor down in pass protection. It’s another factor in his ability to be a people mover in the ground game. Size, mobility, and strength combine to make Christian Darrisaw a desirable NFL Draft prospect.

What are some concerns over Darrisaw?

Like all NFL Draft prospects, there are some concerns over Virginia Tech offensive tackle Christian Darrisaw. One key area where he could improve his game is with his footwork. He needs to make he keeps using his feet throughout his pass protection rep.

This is one of the reasons that Darrisaw is much better in the run game than he is at pass protection. Another centers around his hand usage. He sometimes relies too much on power and not enough on correct placement.

His awareness is another area where he can improve. The best offensive linemen go looking for work. However, there are times on tape where Darrisaw is content to allow the play to pass him by once he’s completed his original assignment. Furthermore, there are examples of him focusing inside when pressure is coming from the edge.

However, these issues are easily refined. Darrisaw has shown that he is easily coached up throughout his Virginia Tech career.

What are Christian Darrisaw’s best fits in the 2021 NFL Draft?

Given his ability in run blocking, a team with a run-heavy focus would benefit from selecting Darrisaw in the 2021 NFL Draft. I like the fit with the Los Angeles Chargers, Indianapolis Colts, and the Pittsburgh Steelers. All three teams will have tackle needs in the upcoming offseason.

Where can Darrisaw expect to be drafted? There is no doubting that he has played himself into first-round consideration. In his latest big board for Pro Football Network, Tony Pauline has Darrisaw ranked as his fifth offensive tackle. Pauline gives him an overall ranking of 32 and a second-round grade.

Wherever he is drafted in April, Darrisaw has come a long way in just three years.