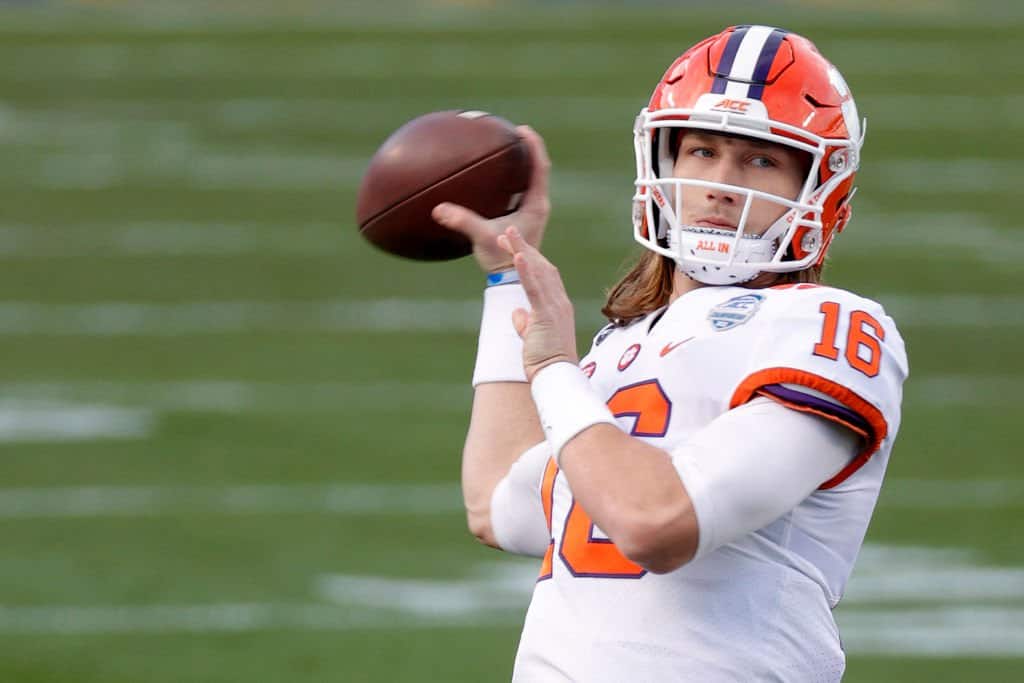 Even without our title player, the 2021 quarterback class is still fairly strong. Justin Fields is an elite athlete with arm talent and competitive toughness. Zach Wilson is a crafty passer with the confidence and malleability to produce amiss adversity. Trey Lance is another tantalizing talent worthy of the top-10 conversation. Taking all this into account, it’s even more impressive that Clemson quarterback Trevor Lawrence is the consensus best QB in the 2021 NFL Draft.

Positives: Outstanding quarterback prospect who is a once-in-a-generation type of player. Displays tremendous awareness and a sense for what’s happening on the field, shows patience in the pocket, and naturally looks off the safety. Buys time in the pocket, scans the field, and spreads the ball around using all his targets. Remains poised under the rush, keeps his eyes downfield, and delivers accurate passes when pressured. Makes terrific decisions with the football, throws with an over-the-top delivery, and possesses a live arm.

Quickly gets the ball out of his hands, displays a sense of timing, and rarely has receivers waiting for the ball to arrive. Challenges the vertical game, delivers deep throws with speed as well as accuracy, and delivers outstanding fade patterns in the end zone, placing the ball where only his receiver can make the reception. Mobile, gets outside the pocket to throw on the move and displays outstanding vision as well as instincts on designed quarterback runs. Consistently makes good decisions with the football.

Negatives: Passes sail over the intended target’s head on occasion. Shows a hitch in his throwing motion.

Analysis: Since his freshman season, Lawrence was a productive, winning quarterback who consistently gave Clemson a chance to come out on top. He possesses the size, arm strength, and intuition to be a franchise quarterback at the next level. The holes in his game are minor, and if surrounded by solid talent, Lawrence can carry a team at the next level.

Lawrence had offers from dozens of schools fawning for his services. However, only a few warranted careful consideration. The talented thrower attracted interest from teams like Alabama, Oklahoma, Georgia, LSU, and Florida. Nevertheless, the championship pedigree of Clemson won over the young quarterback. Thus, he took off to the Carolinas.

Lawrence came to a Clemson team aiming to carry on its tradition of success. The Tigers lost Deshaun Watson to the NFL two years prior, and they again sought out a quarterback who could elevate their roster. Lawrence quickly proved himself as the one to fill that need.

As a true freshman, Lawrence promptly unseated incumbent starter Kelly Bryant and ended up putting together one of the best seasons by a true freshman quarterback in college football history. The Clemson quarterback passed for 3,280 yards, 30 touchdowns, and just 4 interceptions, while completing 65.2 percent of his passes. He also led the Tigers to an undefeated season, knocking off the vaunted Crimson Tide 44-16 in the National Championship game.

Lawrence came back as the full-time starter in 2019 and remained on course with his legendary career.

Although he doubled his interception total with just 10 more attempts, Lawrence still put together an excellent season. The Clemson quarterback put up 3,665 yards, 36 touchdowns, and 8 picks, while increasing his completion percentage and yards per attempt. He also drastically increased his rushing production, amassing 563 rushing yards and 9 touchdowns on the ground.

Lawrence had finished seventh in Heisman voting and led his team to another championship game in 2019. But after losing to Joe Burrow and the LSU Tigers in the big game, Lawrence returned with a score to settle as a junior. A brief stint with health concerns sidelined Lawrence for a couple of weeks, but he still managed to lead his team to an ACC Championship and a CFB Playoff berth.

Lawrence completed 231 of 334 attempts, almost 70%, for 3,153 yards, 24 touchdowns, and 4 interceptions, while adding 8 rushing scores. For the first time in his career, Lawrence was a Heisman runner-up, finishing second behind DeVonta Smith.

Featured | Trevor Lawrence or Zach Wilson: Who is QB1 in 2021 NFL Draft?

Lawrence aimed to end his collegiate career with another ring, but a red-hot Justin Fields out-dueled him and the Tigers in the first round of the playoffs. The defeat sent Clemson packing, but at that point, Lawrence diverted course to the NFL, having lost just two games in his entire collegiate career. Overall, Lawrence completed 758 of 1,138 attempts for 10,098 yards, 90 touchdowns, and 17 picks, while also adding 943 yards and 18 touchdowns on the ground.

With his career, Lawrence reserved himself a seat as one of the greatest CFB players of all-time. It’s a tremendous honor, but it also puts pressure on Lawrence’s shoulders to live up to his promise at the NFL level.

The hype surrounding Trevor Lawrence is no doubt warranted. He’s not perfect, as the hype may lead one to believe, but he’s undoubtedly one of the best quarterback prospects of the millennium. Lawrence compounds impressive mental traits with tremendous athleticism at his size, as well as exceptional arm talent and off-script ability. This combination makes him a safe prospect with a proportionally high upside.

Starting with the physical traits, Lawrence is 6-foot-6, 220 pounds. He moves gracefully for that size. The Clemson quarterback can evade rushers in the pocket, pick up yards on the ground, and also be a designed threat as a runner. Scaling things back, he’s also proficient at navigating the pocket. He can keep his eyes up in the face of adversity while also maintaining strong ball security.

As a thrower, Lawrence is similarly exciting. The Clemson quarterback has a powerful, elastic arm, and he can generate high amounts of velocity with ease. Lawrence’s elasticity allows him to take things a step further from simple power, and mix different degrees of velocity and touch into his throws. He also has generally consistent accuracy to all levels of the field.

On top of all this, Lawrence is a competitive player who’s viewed as an exceptional leader with a calm mentality under pressure. Not much phases Lawrence in the long run, and he processes the field very quickly. He also possesses a natural affinity for mechanical congruence. All this allows his excellent physical traits to shine through.

Where can Lawrence improve in the NFL?

As good as he is, there are a few areas in which Lawrence can keep refining his game.

First and foremost, while Lawrence is an accurate passer, he’s not always pinpoint accurate. In a charting exercise before the season, Dalton Miller pointed out that Lawrence’s ball placement can improve. Especially in the intermediate and deep ranges, Lawrence’s passes can be a bit too linear. They’ll arrive with the necessary velocity, but they don’t always dip down into their target’s hands. This can lead to overthrows, which can lead to turnovers for a defense.

Additionally, Lawrence has some inconsistency with his footwork in the face of pressure. He also occasionally forces throws, attempting to lean on his traits a bit too much. Nevertheless, these are all minor concerns, and ones that Lawrence will likely be able to clean up in the NFL.

No NFL Draft prospect is ever going to be a perfect player, but that’s why they’re called a “prospect.” The word “prospect” implies continued development from a base state. In his current state, Lawrence is an immediate starter with tremendous potential.

Kidding, kind of. In a universe fueled by entropy, there’s always a chance that Lawrence isn’t the pick at No. 1 overall. But as of now, those chances are extremely low. Lawrence has the consistent processing ability that Fields sometimes lacks. He has the production against high-level competition that Wilson lacks. And he has the polish and security that Lance lacks.

All signs point to Lawrence being QB1 in April, and specific schematic fit doesn’t carry much weight. Lawrence’s skill set lends him flexibility on that front. He has the mobility and game IQ to thrive in more versatile schemes, and he has the arm talent and vision to flourish when pushing the ball downfield.

And on top of everything else, Lawrence is a quarterback who attracts confidence as the face of a franchise from Day 1. It’s hard to imagine a scenario where he isn’t picked first. Urban Meyer needs a franchise quarterback above all else. He’s not trading out of a chance to get one of the best.

How does Trevor Lawrence fit the new-look Jaguars?

Since it seems likely that Lawrence and Jacksonville are destined to be together, we can expand on the fit a bit. Darrell Bevell will be Lawrence’s offensive coordinator in his first year. Meanwhile, former Seahawks offensive coordinator Brian Schottenheimer will be Lawrence’s quarterbacks coach. Both coaches bring a great deal of NFL experience, and should help ease Lawrence into the NFL. However, it might be wise to look to Meyer himself for more information on the offense.

Meyer was an innovative, adaptable schematic coach in his time at the college level, working out of spread concepts often. Meyer’s offense puts a lot on the quarterback, but with a talented player like Lawrence, that’s not a bad thing. It remains to be seen how all of the new pieces in Jacksonville will mesh together when the season arrives. Yet, Lawrence has the talent to produce even amidst imperfect circumstances.