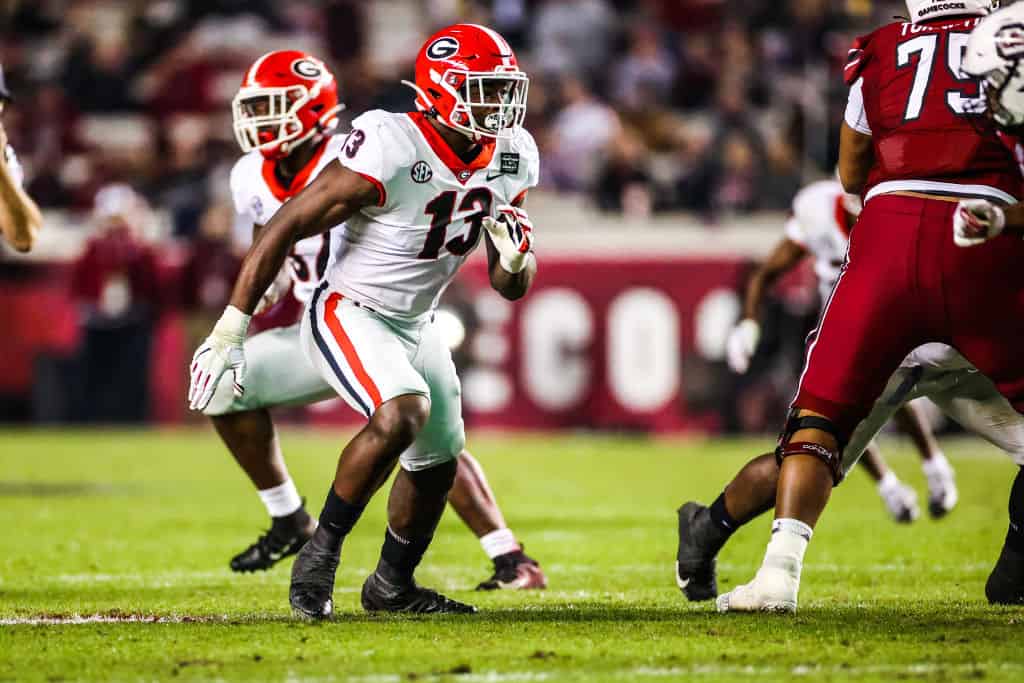 Heading into the season, the 2021 edge rusher class was one of the most obscure position groups. With the 2020 campaign now in the rearview mirror, that hasn’t changed much. But players of different types have emerged, and now, there might be over a half dozen in the Round 1 discussion. Georgia edge rusher Azeez Ojulari is one of those ascending 2021 NFL Draft prospects. He might have been the most productive player at his position this year, and he has the NFL upside to match.

Positives: Gifted pass rusher who is rounding into a complete defender. Fires off the snap with an explosive first step, plays with excellent balance as well as body control, and effectively uses his hands. Keeps his feet off the initial block, consistently gets leverage on opponents, and makes a lot of athletic plays. Focused on by opponents but tough to move off the point.

Agile, easily changes direction, and nicely redirects to the ball handler. Displays terrific speed as well as force off the edge, but can also flip his hips and drop off the line to play in space. Pursues with speed chasing the action, covers a lot of area, and quickly gets out to the flanks.

Analysis: Entering the season, I graded Ojulari as a potential Day 2 choice off of his freshman film. He displayed a great amount of progress last season and is rounding into a complete defender who can stand over tackle and come out of a three-point stance. His lack of bulk will result in bumps in the road early on, but Ojulari will be a terrific defensive front-seven player in time.

There’s a definite mold that Smart searches for in his edge rushers. In his diverse 3-4 scheme, Smart favors lighter, quicker edge rushers who can generate efficient pressure. Azeez Ojulari might be the next Georgia edge rusher to take this mold to the NFL, and he might end up seeing the most success.

Ojulari was a widely sought after recruit in the high school class of 2018. A four-star prospect out of Marietta, Georgia, Ojulari was one of the select players in the Top 250, and he was the 13th-best player at his position. When it came time to choose a college, Ojulari had offers from several high-profile Power Five schools, including Alabama, Florida, Notre Dame, Auburn, and Oklahoma.

Ultimately, however, Ojulari chose to remain in his home state. He signed with the Georgia Bulldogs and effectively became one of the top players in their recruiting class. Less than an hour and a half from Ojulari’s high school, Athens provided Ojulari with an effective staging ground for his NFL career.

Ojulari came into college a bit underweight, and so he had a limited role as a freshman. Playing in just two games in 2018, Ojulari managed to preserve his redshirt eligibility, and he was redshirted after putting up just four total tackles and one tackle for loss.

In 2019, after the departure of D’Andre Walker, Ojulari elevated into an extended role on defense. He played in 11 games for the Bulldogs, logging 33 total tackles, 5.5 tackles for loss, 5.0 sacks, and a forced fumble. Although Ojulari had yet to experience consistent success, his promise was clear as a redshirt freshman.

The Georgia edge defender carried the starter’s designation into the 2020 season, and despite complicated circumstances surrounding the season, Ojulari broke out.

Ojulari worked hard to refine his skill set in the offseason, and he was rewarded with a stellar 2020 season. Playing and starting in ten games this season, Ojulari accumulated 31 total tackles, 12.5 tackles for loss, 8.5 sacks, four forced fumbles, and two pass deflections. The Georgia edge rusher earned recognition as a semifinalist for the Chuck Bednarik Award for his efforts. He was also a second-team All-SEC selection at outside linebacker.

By late December, Ojulari already established himself as one of the top performers in the SEC. However, rather than opting out of the team’s bowl game, Ojulari decided to stay for the Peach Bowl. Players often opt out of bowl games to preserve their health and draft stock. Ojulari broke the trend and stayed in, and it ended up being the best decision he could have made.

Ojulari’s final game was the best of his career

Azeez Ojulari was a menace for the Cincinnati Bearcats in Georgia’s 24-21 bowl victory. The redshirt sophomore logged three sacks, and he also forced two fumbles and a safety.

The Georgia edge rusher made life extremely difficult for quarterback Desmond Ridder, and his risky decision wound up looking perfect in retrospect. Not only did he show his competitive drive by going out to battle with his brothers one more time, but he also maximized his opportunity and punctuated his collegiate career with an excellent final impression.

Now, with the bowl game out of the way, there’s never been a better time for Ojulari to declare. The Georgia edge rusher did in fact declare after his stellar bowl game performance. Now, the attention turns toward his NFL Draft projection. How good can Ojulari be?

Standing at 6-foot-2, 249 pounds, Azeez Ojulari is likely best suited to be an outside linebacker in a 3-4 scheme. He doesn’t quite have the size to be a 4-3 defensive end, but his frame isn’t a big problem. In his role, he has the skill set to be a potentially dominant pass rusher, and that’s upside NFL teams will pay a premium for.

Ojulari has good density even for his size, and he packs a surprising amount of power and suddenness into his frame. He’s incredibly explosive off the line of scrimmage. He also has the bend to flex around the edge once he gets a step on his man. Although his explosiveness can sometimes carry him too far past the pocket, allowing linemen to wash him out of the play, Ojulari has the raw traits you want on the edge. He also compounds them with a few more exciting tools.

Ojulari’s frame implies lesser length, but in fact, Ojulari has exceptional proportional length. Ojulari has almost 35-inch arms, and a wingspan of 82.5 inches. Beyond his reach, Ojulari’s hands are fast and powerful, and his initial strikes can be precise and well-timed. The Georgia edge defender has an understanding of where to attack linemen as he accelerates around the corner. He’s a dense ball of energy as a rusher, whose amped-up play style makes him a dangerous player.

Ojulari’s natural twitch also makes him a formidable foe in those battles. Linemen sometimes have slightly better length than he does, but his quickness, precision, and willingness to engage help split the difference. Ojulari also displays the ability to convert his explosiveness into power. For a player with his frame, that will be key at the NFL level.

Ojulari’s pass rushing ability alone might be worth a first-round pick. However, there is some inconsistency in his game, particularly against the run.

Predictably, when Ojulari isn’t pressing upfield with his initial burst, his smaller frame can be superseded by linemen looking to create displacement. There are times on tape when Ojulari builds up enough momentum to pop run defenders and maintain the edge, but he doesn’t have the anchor to hold his ground consistently.

Additionally, Ojulari needs to come up with more contingency plans as a pass rusher. His style dictates that he can win quickly, but when longer linemen get their levers on him first, he sometimes struggles to break free. He has the hand speed, length, power, and flexibility to flesh out this part of his game. However, it might take some time for him to develop new combos and diversions.

At the core of his profile, Ojulari is a pass rush specialist. But even despite his inconsistencies in run defense, he’s not a liability there. His high motor, agility, and hand power help him compete, and he has enough in his toolbox to disengage and pursue running backs when they break to the outside.

Additionally, Ojulari also shows the ability to drop off in coverage on occasion. His primary mode will always be pass rushing. However, as a 3-4 outside linebacker, versatility is good to have, which solidifies Ojulari’s profile.

Azeez Ojulari has quickly emerged as a potential Round 1 pick. Throughout the season, more and more mock drafts have reflected that possibility. Grading the 2021 NFL Draft’s edge rusher group will be a subjective exercise for each team, but especially for teams who use 3-4 alignments, Azeez Ojulari has a lot of appeal. He’s not a perfect prospect, but he’s a pure disruptor as a pass rusher, and his high motor and work ethic combine to make him a safe investment with very high upside.

Given his prowess as a pass rusher, Ojulari fits best with teams who need rushing help right away. His draft range isn’t quite developed yet, as we still need to see him test. However, with his bowl performance, it’s never been more feasible to think that Ojulari could go Round 1.

In the first round, the Tennessee Titans stand out as perhaps the best match for Ojulari, both from a need and a scheme perspective. Other potential fits include teams like the Giants, Ravens, Dolphins, Cardinals, Buccaneers, Browns, and Jets.

If Ojulari somehow makes it to Round 2, the Jaguars, Jets, and Falcons are all in prime position to add him. But at this point, his chances of going on Day 1 are trending up. Even before the Peach Bowl, there were talks of Ojulari going that high. Now that he’s tested with solid athletic numbers — among them a 4.63 40-yard dash and a 127-inch broad jump — his range should be fairly set.