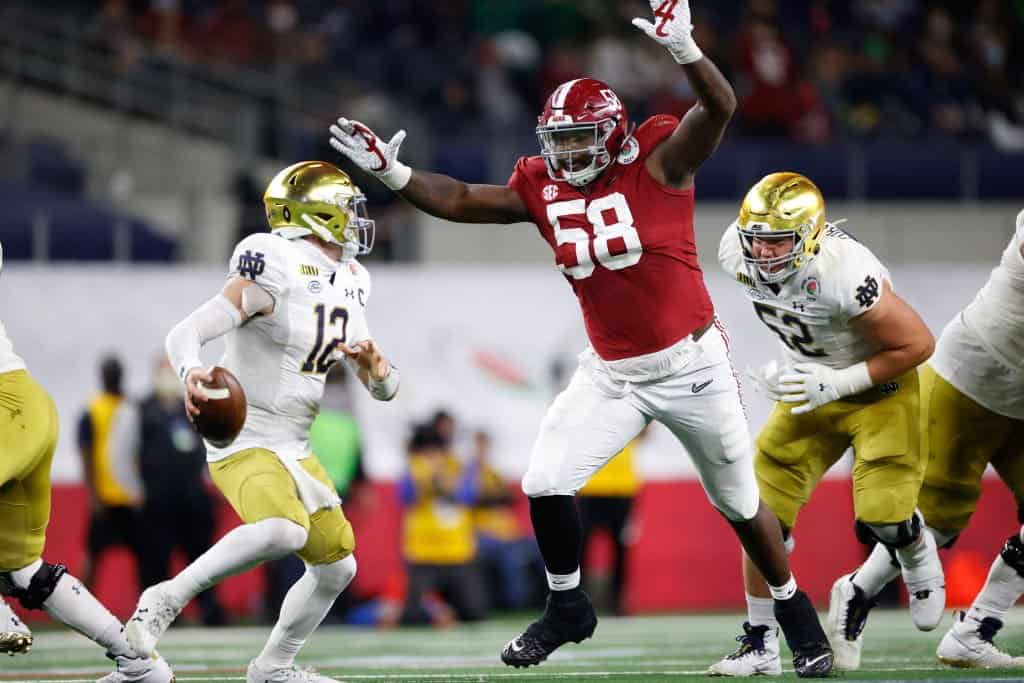 Alabama defensive tackle Christian Barmore has long had some of the most name recognition in the 2021 NFL Draft. But does the redshirt sophomore have the draft profile to truly contend for the top positional ranking in the class? There are a lot of elements to consider with Barmore. However, as is often the case with Alabama defensive linemen, there’s also much to like.

Positives: Explosive three-technique tackle who shows a lot of athleticism. Agile, keeps his feet moving, and nicely redirects to the action. Plays with proper pad level and consistent knee bend, easily moves about the field, and consistently gets leverage on opponents. Fluid moving laterally, quickly changes direction, and displays speed in both a straight line and out to the flanks. Explodes off the snap with a terrific first step and is consistently focused on by opponents.

Negatives: Flashes power in his game yet must improve his overall playing strength. Often handled by a single blocker if he does not get the first step on opponents. Struggles facing off against larger, mauling blockers.

Analysis: Barmore displayed consistent progress in his game the past two seasons and is a conventional tackle in a four-man line with growth potential. He should only improve as he adds bulk to his frame as well as strength to his game, though Barmore may struggle early in his NFL career.

The Alabama Crimson Tide have a long-standing pipeline of NFL talent on the defensive line. They signed Christian Barmore, intent on maintaining their influence. Barmore was a highly-rated prospect in the 2018 recruiting class. Standing at 6-foot-5, 290 pounds, Barmore was the fifth-best defensive lineman in the class. He also ranked 75th overall in the nation.

Despite his attractive skill set, Barmore didn’t have early interest. The Philadelphia native signed with his hometown team, the Temple Owls, in the summer of 2017. It wasn’t until the winter season that Barmore started to receive offers from more high-profile schools. After receiving interest from teams like Florida and Georgia, Barmore de-committed from Temple and reopened his recruiting process.

The four-star Barmore eventually had scholarship offers from a host of other college football programs. Among those schools, the LSU Tigers, Miami Hurricanes, and Oregon Ducks all expressed interest. However, a late offer from Alabama proved too enticing for Barmore to decline. Barmore signed with the Crimson Tide in December of 2017 and enrolled the following year.

Despite coming in with a good amount of excitement, Barmore redshirted his first season with the Crimson Tide. Stuck behind a rotation that included Quinnen Williams, Isaiah Buggs, and Raekwon Davis, there wasn’t much room for Barmore to get reps. However, after Williams and Buggs hit the draft circuit in 2019, the doors opened for Barmore to do more.

In 2019, Barmore played in 12 games while logging a start for the Crimson Tide. The redshirt freshman made a name for himself as a rotational playmaker on the interior.

Over that span, Barmore logged 26 total tackles, 6.0 tackles for loss, 2.0 sacks, and two pass deflections. He was named to the all-SEC freshman team by the coaches, and when Davis left after the season, the defensive line became Barmore’s to lead.

Christian Barmore’s 2020 season started a little slow. The Alabama defensive tackle came into the season with a lingering knee injury, which affected his mobility. But as the season progressed, so too did Barmore.

He ended the regular season with 27 total tackles, 6.5 tackles for loss, 6.0 sacks, three pass deflections, and three forced fumbles in nine games. Additionally, he had a sack and a tackle for loss in his first CFB Playoff game against the Fighting Irish.

On Monday, Barmore, a first-team All-SEC selection, will aim to end his 2020 season on a high note against the vaunted Ohio State offensive line. After that, it’s on to his future. Although Barmore hasn’t yet declared for the 2021 NFL Draft, rumors suggest that he’s leaning in that direction.

Few players helped themselves in the College Football Playoffs more than Christian Barmore. Once on the cusp of the first round, he now might have the best chance to be the first defensive tackle off the board, and with good reason. Barmore was very good against Notre Dame, and he carried on that impact against Ohio State.

In the National Championship game, Barmore logged five total tackles, 2.0 tackles for loss, and a sack. One of those tackles for loss came on a crucial fourth down play in the third quarter. The Buckeyes tried to go with an outside handoff to the right, but in seconds, Barmore broke through the line with his play strength and used his explosiveness to dive and wrap up the runner. His other tackle for loss, a sack, also featured his brutal combination of burst and brawn. His success earned him recognition as the game’s defensive MVP.

Barmore’s full season totals now amount to 9.5 tackles for loss and 8.0 sacks. For a player that started out 2020 on a shaky note with an injury, the season’s conclusion couldn’t have gone much better. Barmore finally realized the potential that he flashed so often before, and that confirmation will be crucial in an otherwise obscure defensive line class.

If you only watch his highlights, you’ll see a bonafide first-round player in Christian Barmore. The Alabama defensive tackle is a huge, thick player from head to toe. He has long levers for arms, and he also shows exciting flashes of explosiveness off the line of scrimmage. When he couples this burst together with well-placed hand moves, he puts together some truly impressive reps.

While Barmore’s flashes of explosiveness are undoubtedly inspiring for his size, his most consistent trait is his power. Barmore packs a ton of power into his imposing frame, and he uses this in conjunction with his length to establish a strong anchor against offensive linemen.

Barmore also uses this power with heavy hands as a pass rusher. When he times and places his hand punches well, he can win one-on-one reps with ease. Additionally, Barmore has the recovery athleticism to shed blocks and make tackles in run defense.

Barmore’s size and lower-body explosion also give him exciting versatility. He has the length and play strength to line up all across the line, and if he can hone more of his athletic traits at the next level and piece together uncoordinated parts of his game, he can be an impact starter.

Where does Christian Barmore fall short?

The big withstanding issue with Barmore’s game is his development. As a redshirt sophomore, he’s expectedly raw. Barmore clearly has the urgency and desire to impose his will with his hands, which is a big plus for his continued progression. However, Barmore is still inconsistent with his precision and timing.

His flashes of well-timed clubs and swipes often yield success for the Alabama defensive tackle, but he’ll need to refine his process and add more moves to his repertoire at the next level.

Additionally, there are some games in 2020 where Barmore’s athleticism itself was streaky. Especially early on, Barmore wasn’t as consistently explosive or as free of a mover in space.

Were there underlying factors behind Barmore’s early struggles?

That said, Barmore was dealing with a knee injury early on. In Alabama’s later games, Barmore was much more consistent getting off the line, and he also showed off much more of his exceptional lateral agility for his size. Thus, it can be reasonably assumed that his injury was hurting the Alabama defensive tackle’s ability to move.

Absent from the injury, Barmore has an enticing amalgamation of size, length, explosiveness, lateral agility, and modest upper body flexibility as well. After his initial burst, he’s not as good at closing ground with pursuit speed, but he still has a superb athletic profile. Once he can add more refinement to his game, he can be an outstanding player.

Christian Barmore is an exciting defensive line prospect, and down the stretch, he might have done enough to rise in the interior defensive line class. He’s not a surefire first-round pick. However, he’s bound to get early interest with his upside and relatively complete pallet of traits. Additionally, if he doesn’t go in Round 1, he’s an excellent value addition on Day 2.

Barmore’s polish will need to be corrected at the NFL level. If he doesn’t go to a team with a proven track record of development on the interior defensive line, his upside could be impacted. It’ll be up to teams to make sure they can create an environment conducive to further development for Barmore. Beyond that, Barmore has the size, athleticism, and urgency to be a versatile threat.

Which teams could use Barmore’s talents the most?

Barmore’s size profiles best in a 4-3 defensive tackle role, which lines up most often at the three-technique, across from the guard’s outside shoulder. But with his length, power, and initial burst, Barmore can also line up farther outside, and he can also cause disruption all the way to the nose in a 3-4.

That said, when thinking of the three-technique as Barmore’s best alignment, teams like the Cowboys, Vikings, Saints, and Raiders seem like his best fits. However, more versatile defenses like the Packers, Bengals, and Cardinals could also benefit.

The appeal with Barmore derives from his upside. The Alabama defensive tackle has a well-rounded mix of tools to use against blockers, and with more development, he can be a very dynamic threat on the interior. Even with his improvement, he may not be everyone’s top defensive lineman. Nevertheless, Christian Barmore has the physical potential and steep upward trajectory to warrant a Round 1 pick in the 2021 NFL Draft.