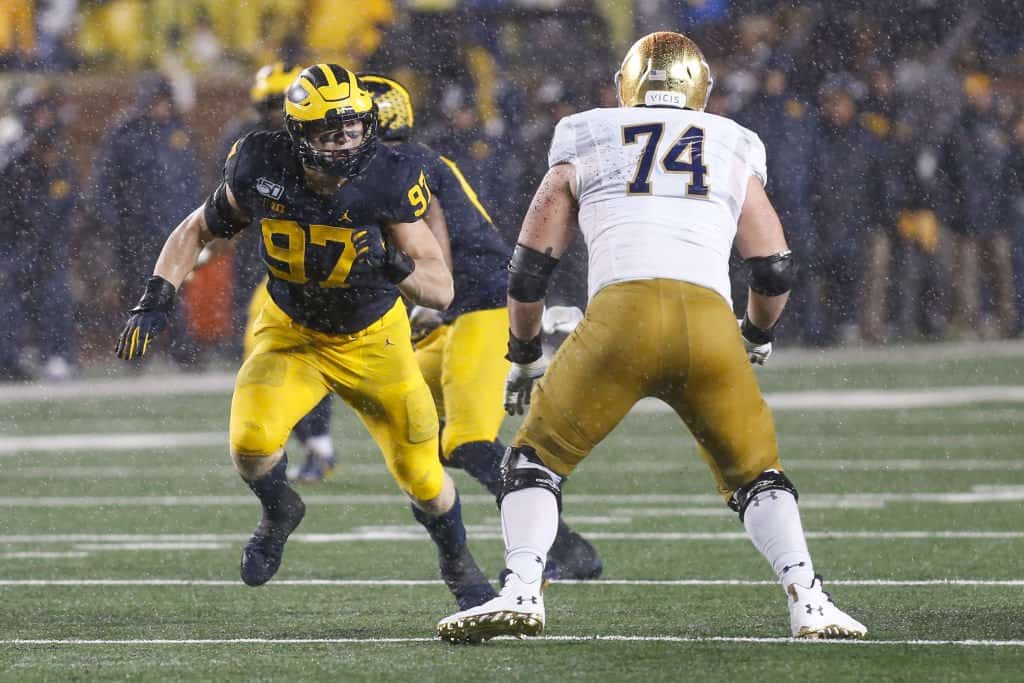 Over the last decade, the Notre Dame Fighting Irish have been an offensive line factory, churning out NFL stars like Zack Martin, Ronnie Stanley, and Quenton Nelson. Add in other linemen such as Nick Martin and Mike McGlinchey, and the Irish have produced some of the best linemen at each position in the NFL. Under Brian Kelly, every single left tackle has been a first-round selection. In the 2021 NFL Draft, Liam Eichenberg looks like he will join that list of players.

Positives: Large, strong college left tackle who projects to the right side at the next level. Blocks with proper lean and displays outstanding vision as well as awareness. Terrific position blocker who picks up stunts and blitzes, squares into opponents, and seals defenders from the action. Keeps his feet moving, correctly places his hands into opponents, and makes terrific use of angles. Strong, flashes power as a run blocker, and moves defenders off the line. Better-than-average range off the edge, gets leverage on opponents, and looks to hit multiple defenders on each down.

Negatives: Really doesn’t sink his butt at the line of scrimmage. Struggles handling speed rushers and gets exploited on the blitz. Not light on his feet or effective blocking in motion and lacks quick, fluid footwork off the edge.

Analysis: Eichenberg is an imposing offensive lineman who gets the most from his ability and plays intelligent, intense football. He was productive and durable for Notre Dame and comes with growth potential. Eichenberg has the tools necessary to develop into a terrific right tackle in the NFL.

Liam Eichenberg landed at Notre Dame as one of their best offensive line recruits in recent years. Eichenberg was a 4-star recruit and was ranked as the No. 7 offensive tackle and the 83rd overall player in 24/7 Sports’ composite rankings in the class of 2016, choosing Notre Dame over Ohio State. He joined 5-star Tommy Kraemer as two of Notre Dame’s biggest recruits that year, and those two have been foundational pieces for the Irish the last few seasons.

Eichenberg was a touted recruit out of Cleveland St. Ignatius, which has manufactured some notable NFL players like LeCharles Bentley, Brian Hoyer, Oliver Luck, Dre’Mont Jones, and another highly-touted offensive tackle currently playing at Kentucky in Darian Kinnard.

Eichenberg starts to get noticed

His recruiting stock skyrocketed after his performance in the 2016 Under Armour All-American Bowl game. He participated against other top recruits, including Nick Bosa, Ed Oliver, McTelvin Agim, Keyshon Camp, and Oluwole Betiku. He earned a name for himself by routinely stopping the best of the best.

Eichenberg had to wait until the 2018 season before he got his starting shot, sitting behind an eventual top-10 pick Mike McGlinchey for two seasons. Eichenberg started the season rough but improved significantly as the year went on. He didn’t allow a single sack and gave up just one hit on the quarterback in the final eight games of that season, including the Cotton Bowl game against Clemson.

Eichenberg carried the momentum from 2018 into the 2019 season. Eichenberg did not allow a single sack all season long and held up well against top pass-rushers like Kwity Paye, Aidan Hutchinson, Chris Rumph, Victor Dimukeje, and Drake Jackson. Pedigree and top competition have helped the Notre Dame offensive tackle develop as a pass protector, and that shows on tape.

After a few rough patches and stretches of games in 2018 and 2019, Liam Eichenberg’s game was downright dominant at times in 2020. He stonewalled almost every pass rusher he went up against. Once again, those included some big-time names like Patrick Jones II from Pitt, Joshua Kaindoh from Florida State, Chris Rumph II and Victor Dimukeje from Duke. He even won often against Clemson’s talented defensive line with too many guys to list.

Heading into the season, he needed to show a little more strength. Additionally, he needed to refine his use of hands to take that next step and boost his NFL Draft stock. Eichenberg has delivered. Despite the hysterical offseason, Eichenberg was downright dominant and wasn’t afraid to move defenders.

Eichenberg stands at 6-foot-6, 306 pounds with adequate arm length. When Eichenberg hits his strikes, he generates a jolting amount of power, creating leverage against the defender. His hands lock-in and move defenders.

Eichenberg moves well in space and does an excellent job of keeping his feet controlled to engage defenders in space. Notre Dame designs numerous screens that flow towards Eichenberg’s side, and he does a great job of sealing and cutting off linebackers and defensive backs on the move. He understands angles in space and rarely lunges or over-extends when trying to hit his target.

Eichenberg isn’t the most athletic player at the tackle position in this draft. Players like Texas’ Samuel Cosmi are more “athletic” than he is. However, you don’t need to be an elite athlete to be a successful NFL tackle. Players like Mitchell Schwartz and Taylor Decker spring to mind in that regard.

A few teams towards the end of the first round that could use a left tackle. The Indianapolis Colts, the Tampa Bay Buccaneers, and the Pittsburgh Steelers all stand out to me. Tampa Bay and Pittsburgh both have a veteran quarterback that isn’t the most mobile. Additionally, they could both use an upgrade at left tackle.

The Indianapolis Colts lost long-time starting left tackle Anthony Costanzo and need to ensure they protect new quarterback Carson Wentz’s blindside. Having a pass-protecting island at left tackle in Eichenberg who also can dominate in power blocking schemes would be a boon to these three teams.

At the top of the second round in the NFL Draft, Liam Eichenberg would also be a good pick for teams like the New York Jets or the Los Angeles Chargers, who need to protect their young quarterbacks. Eichenberg’s pass protection ability stands out in an NFL Draft class that doesn’t have a consensus OT2 behind Penei Sewell.