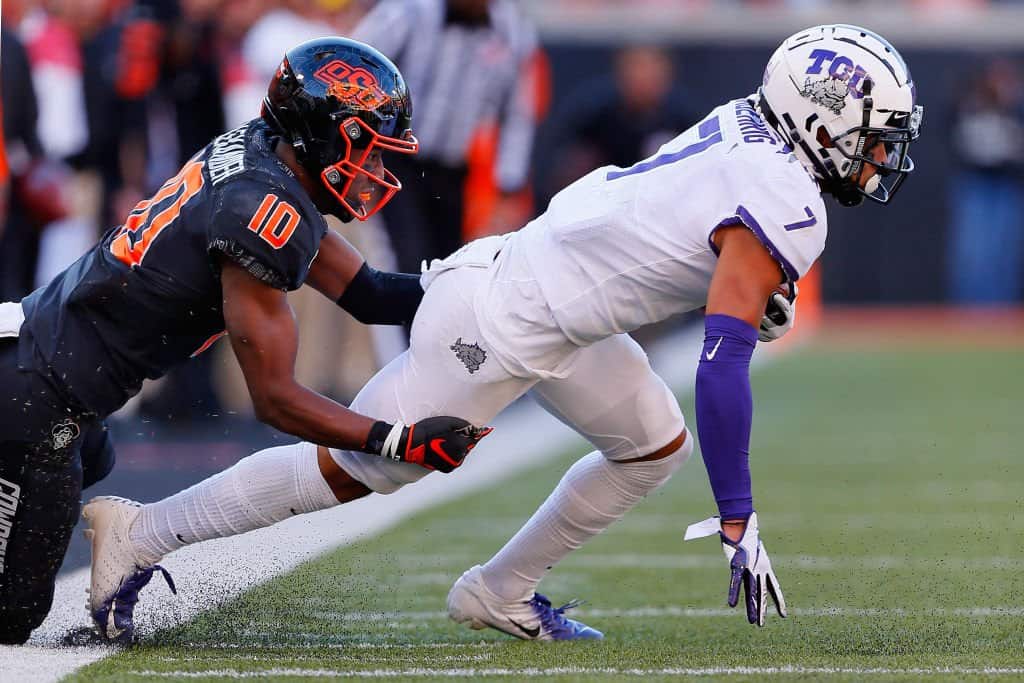 Even after a full 2020 season, the pecking order remains obscure at some position groups in the 2021 NFL Draft. One of four wide receivers could be WR1. The interior defensive linemen draft board is a chaotic mess. And the safety group also brings few guarantees. However, if there’s any one standout, it’s TCU safety Trevon Moehrig, a player who’s drastically improved his NFL Draft stock with a strong 2020 campaign.

Keeps the action in front of him, displays good awareness in coverage, and works hard. Stays with receivers laterally on crossing patterns. Solid run defender who slides off blocks and makes plays on the ball handler. Willingly takes on bigger opponents and drives through tackles.

Negatives: Gets too amped up, overcommits and occasionally gets caught out of position. Must improve his playing balance. Lacks deep speed.

Analysis: Moehrig was productive for TCU in a variety of ways and has the size as well as skill to line up as a zone or strong safety. He must polish his game, yet Moehrig has enough ability to see significant action as a rookie in the NFL.

Some players inherit a level of prestige as they ascend the ladder to professional football. Trevon Moehrig, however, has had to work for his prestige at every destination. Moehrig was rated as a three-star prospect in the recruiting process. Then a receiver, cornerback, and return specialist for Smithson Valley High School in Texas, Moehrig was the 68th-best prospect at his position, and he fell well outside the top 100 in his state.

Regardless, Moehrig still received offers from Power Five teams; his 6-foot-1 frame made him an intriguing player on the back end. Moehrig attracted interest from schools such as Ole Miss, Minnesota, Northwestern, and Oklahoma State. But ultimately, he decided to sign with the TCU Horned Frogs. TCU offered a history of developing defensive backs, and Moehrig also desired to help compete for Big 12 supremacy.

The jump represented a challenge for Moehrig, but Moehrig’s high school coach, Larry Hill, anticipated Moehrig would be ready. At Moehrig’s signing ceremony, Hill called Moehrig “a tremendous player, a tremendous kid, and a very hard worker,” and left no doubt that Moehrig would flourish at the college level. Now, it was only up to him to prove it.

Moehrig saw the field as a true freshman for the TCU Horned Frogs but was used primarily as a special teams player. This wasn’t an insult to the young player. Instead, it was an expected step on the road to relevance and a valued opportunity to make his presence felt. And Moehrig did just that. He established a niche for himself on special teams, and by year’s end, he was voted TCU’s Most Valuable Player on special teams by his fellow teammates.

In 2019, Moehrig’s true sophomore season, the Horned Frogs coaching staff gave him an increased role on defense. The hope was that Moehrig’s range and tenacity — traits that stood out on special teams — would translate well at the safety position. They did, perhaps better than anyone expected.

Moehrig played in twelve games in 2019 and quickly stood out as one of TCU’s most impactful defenders. He logged 62 total tackles and 1.5 tackles for loss, but his influence was most heavily felt in coverage. There, the TCU safety showed off incredible ball skills, notching four interceptions and 11 pass deflections. He also forced two fumbles, perpetuating a penchant for creating momentum-changing plays.

In 2020, Moehrig reinforced his status as one of the Big 12’s most dynamic defenders. In ten games, he added two more interceptions and nine more pass deflections to his stat résumé. He also added 47 tackles and 2.0 tackles for loss. Moehrig’s production put him in the running for the Jim Thorpe Award and also placed him on the All-Big 12 First-Team defense for a second consecutive year.

In a safety class that’s largely underwhelming, some draft analysts see Moehrig as the best player at his position. It’s not just Moehrig’s success that impresses, but also his mode of success. Moehrig possesses an exciting play style and a high-upside athletic profile. Thus, he rests at the top of the list when it comes to NFL potential.

Trevon Moehrig is a playmaker. That much is clear right away when watching his tape. Moehrig, often used in two-safety looks, has impressive speed and acceleration for his size. He can close gaps with tremendous quickness, and at the catch point, he has the length to extend and disrupt the catch process. His 4.52 40-yard dash and 33-inch slightly subverted expectations for his athletic testing, but he’s still a very good athlete.

Moehrig’s range is translatable to both run and pass defense. As a pass defender, his range enables him to hone in on intermediate and deep routes. As a run defender, the TCU safety’s range allows him to come downhill with ample momentum. From there, he can use his 202-pound frame to deliver some jarring hits. While he still has room to add to his physique and play strength, Moehrig isn’t lacking in toughness, and he’s incredibly aggressive by default.

Although being aggressive extends from proactivity, it can also be a negative quality for Moehrig. At times in run defense, he overshoots his angles and plays himself out of leverage. Additionally, as a pass defender, Moehrig’s desire to cut inside in-breaking routes can leave him susceptible to double moves. Consequently, he can leave some big plays out there for the offense.

With that being said, Moehrig generally shows good instincts in those situations, and when he does over-commit, he has the skill set to recover quickly and match receivers.

Dalton Miller worded it perfectly in an earlier article on Moehrig: “There aren’t many players better clicking forward to close on passing lanes than Moehrig. He’s able to smoothly transition from his pedal to drive on a route or ball and possesses instant acceleration. And his hips hinge effortlessly to turn and burn vertically when his eye discipline remains stead on the receiver in true man-to-man coverage.”

The biggest emphasis for Moehrig is consistency. Moehrig doesn’t suffer from a habitual lack of awareness when it comes to tackling angles. He has the instincts to anticipate routes. He just needs to hone his instincts and learn how to find a better balance of patience and pace at the NFL level. Once he does that, he can be a special player.

Moehrig’s weight may slightly limit his upside as a run defender, as he may have more trouble holding up against NFL-sized blockers. But Moehrig already has a serviceable floor there regardless. Furthermore, his immense potential in coverage will be of great value, especially in an NFL emblazoned by the pass.

Moehrig can play in two-high looks or at single-high safety. He can play the ball deep or clamp down on routes in the box. And he has the ball skills to make pivotal plays at any point on the field. Moehrig has the upside of a true game-changing free safety. Thus, teams that need a rangy, impactful defender on the back end have the most to gain from adding the TCU safety.

Many teams can stand to upgrade at that position, but teams with a clear or impending void at free safety make the most sense. Looking at teams in Moehrig’s draft range — late-first to mid-second — the Washington Football Team, Baltimore Ravens, New Orleans Saints, Dallas Cowboys, Las Vegas Raiders, and Carolina Panthers stand out.

Wherever he goes, Moehrig will be under pressure to produce for his defense. That’s the standard he’s built for himself at TCU. But talk to anyone who knows Moehrig, and they won’t be worried about his chances. Moehrig relishes the opportunity to face a challenge. He’s no stranger to working for success.