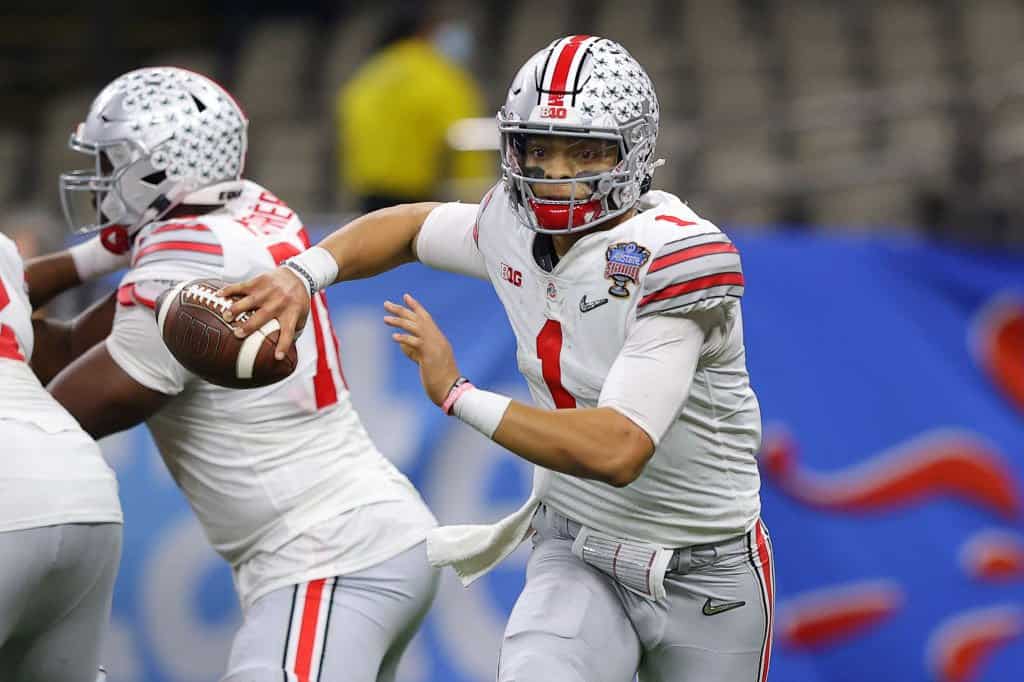 NEW ORLEANS, LOUISIANA - JANUARY 01: Justin Fields #1 of the Ohio State Buckeyes looks to pass against the Clemson Tigers in the third quarter during the College Football Playoff semifinal game at the Allstate Sugar Bowl at Mercedes-Benz Superdome on January 01, 2021 in New Orleans, Louisiana. (Photo by Kevin C. Cox/Getty Images)

For eighteen NFL teams, the season is over and the focus turns to the NFL Draft. How can teams improve upon their performances in 2020 and finally convert on their playoff promises in 2021? There’s no fool-proof formula, but the 2021 NFL Draft will give these teams a chance to succeed. This 3-round 2021 NFL Mock Draft is just one potential outcome.

It gets kind of boring writing Trevor Lawrence’s name at No. 1 every time in these 3-round 2021 NFL Mock Drafts. But there’s almost no other choice for the Jaguars. Jacksonville needs a legitimate franchise quarterback, and Trevor Lawrence is the consensus QB1 in a class that’s fairly strong. He has the athleticism, arm, and leadership ability to pace the position for years.

In all honesty, the Jets and Sam Darnold could both benefit from a change of scenery. But what if — just what if — the Jets keep Darnold? Jets general manager Joe Douglas is known to be fond of the 23-year-old quarterback, and perhaps a new coach might be enough of a change for Darnold, who spent two seasons suffering under Adam Gase.

If New York rolls the dice one more time with Darnold, their focus would be on giving him the best chance to succeed. Having Mekhi Becton and Penei Sewell guarding the ends is a great place to start.

Again with my job security in mind, I avoided picking a quarterback here, even though Justin Fields remains on the board. Tua Tagovailoa wasn’t particularly inspiring in his rookie season, but sometimes that’s just how rookie seasons are. It would be irresponsible for Miami not to give him another year of development, at the very least.

It would be responsible, however, to kill two birds with one stone by selecting Micah Parsons. Parsons is an elite athlete with immense potential as a linebacker hybrid in Brian Flores’ scheme.

Whether the Falcons keep or trade Matt Ryan, they need to have the future in mind at quarterback. Ryan himself is aging, and the new coaching regime might want a fresh start. Ryan could be a good bridge quarterback and mentor for the next signal-caller.

However, his days are likely numbered. Atlanta has other needs, particularly on defense, but Justin Fields is hard to pass up. Fields offers Atlanta exceptional athleticism, talent, and toughness, and he can make their infamous 2017 Super Bowl appearance a distant memory.

The Bengals have needs across the board, but no need is greater than protection for Joe Burrow. Operation “Protect Joe Burrow at all costs” is a go, and even though Penei Sewell isn’t available here, Rashawn Slater still provides good value with his athleticism and versatility.

Slater doesn’t have as much name recognition as Sewell, but he has a lot of respect in some corners. NFL.com’s Daniel Jeremiah had Slater as his No. 1 overall offensive lineman in late November. With his smooth style and innate leverage, Slater can provide security wherever the Bengals need him to play.

If you’re coming into this cold and don’t know who Kyle Pitts is, I’ll spare you the suspense. He’s not just a tight end. Kyle Pitts is a unicorn athlete at 6-foot-6, 240 pounds. He has the explosiveness, fluidity, and route running nuance to get open underneath, and he has outrageous length, body control, and play strength to dominate in contested situations.

Pitts can line up anywhere, and for an Eagles team that has a thin WR corps, and might be losing Zach Ertz, Pitts relieves a lot of pressure. He also provides astronomical upside.

Matthew Stafford deserves respect for what he’s dealt with in Detroit. He also deserves to give the playoffs a shot with another team. Detroit and Stafford might cut ties this offseason. If that happens, Detroit will be in prime position to nab a quarterback with this pick, whether they trade up or stay put. Here, BYU star Zach Wilson is available.

Wilson isn’t quite as athletic as Fields or Lawrence. Nevertheless, he has a ton of arm talent, improvisational ability, and an infectious personality that should help him quickly take root as the face of the franchise.

Caleb Farley has some of the highest upside in the cornerback class. With his length and closing ability, Farley can lock down one of the boundary spots.

If you’re surprised, you can stay surprised. This is somewhat surprising. But Tony Pauline did say in his most recent mailbag that he thinks Zaven Collins could be a surprise top-10 pick. Pauline also has Collins as his 12th overall player, and there’s merit in that ranking.

Collins is an exciting athlete at 6-foot-4, 260 pounds, and he’s also a smart, instinctive player. He’d provide a potential blue-chip player on the second level of Denver’s defense, as well as a versatile threat who can contribute in all phases.

If the Cowboys can revamp their defense in the 2021 offseason, they can come back as playoff contenders in 2021, so long as Dak Prescott gets back to full health. Starting the defensive revamp in Round 1, Patrick Surtain II is the pick here. Surtain has the length, ball skills, and competitive instinct to be a long-term boundary starter, and he has enough athleticism to match receivers on the outside.

It’s impressive how respectable the Giants’ defense was in 2020, considering how many needs they have on that side of the ball. First and foremost, adding a legitimate pass-rushing presence on the edge is a priority, and Georgia EDGE Azeez Ojulari is a good fit. Ojulari is an amped-up, explosive defensive end who makes up for his 6-foot-3, 240-pound size with burst, bend, fast hands, and impressive speed-to-power momentum on his rushes.

All it takes is one look at the bags under Kyle Shanahan’s eyes to tell you that Jimmy Garoppolo ain’t it. It’s time for the 49ers to get a quarterback who simply does more. Zach Wilson is the ideal pick with his moxie and off-script ability, but Trey Lance is an excellent consolation prize.

Lance has superior athleticism and also has good arm talent and deep throwing ability. He can add another element to San Francisco’s offense, although pairing him with a veteran in his first year would be beneficial.

Justin Herbert plastered his name across the rookie quarterback record books in 2020. After one year, he has become a cherished asset that the Chargers must keep safe. No more putting the offensive line on the back burner. With this 3-round 2021 NFL Mock Draft selection, the Chargers are finally proactive in protecting their quarterback.

Christian Darrisaw was a massive riser this season. At 6-foot-5, 314, Darrisaw has optimal size and length, and he also moves well. He plays with good power and leverage, and he has the upside to be a bookend blocker for a decade-plus.

Above all else, the Vikings need pass-rushing help, both on the edge and the interior. Adding pass-rushing help not only improves the team’s ability to generate pressure, but it also incubates a young secondary. Kwity Paye is a great value pick here. At 6-foot-4, 270 pounds, Paye has the motor, explosiveness, length, and cornering ability to be an imposing defensive threat.

The Patriots will have a ton of turnover in their receiving core this offseason, so whoever lines up at quarterback will need a new threat on the boundary. Ja’Marr Chase is an excellent fit in this sense.

Chase is a good athlete with enough YAC ability and route running nuance to be self-sufficient. But where he truly wins is with his catching ability. Chase has some of the best natural instinct for catching the football in the league. He’s vertically explosive, and he has impeccable body control and contortion ability.

With Patrick Peterson’s future unclear, and with Arizona’s cornerback position thin outside of Byron Murphy, the Cardinals need to invest in the cornerback position this offseason. Peterson turns 31 years old this offseason, so moving on might be a prudent long-term move, and Jaycee Horn can help ease that transition. At 6-foot-1, Horn has the necessary length to start on the boundary, and he also has the athleticism, physicality, and attitude to make an impact early.