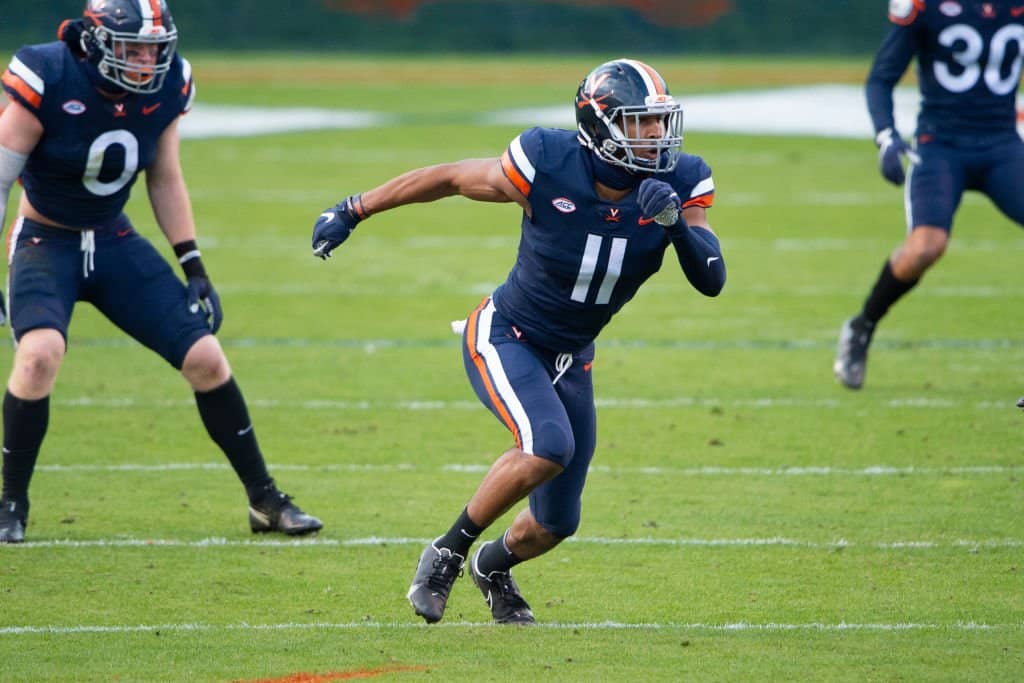 There’s a traditional range of heights and weights that are generally expected from linebackers. Virginia linebacker and 2021 NFL Draft prospect Charles Snowden scoffs at those puny numbers. Snowden seems to defy the laws of physics with his measurements, but in the past, rare physical specimens have had trouble projecting to the NFL. What are the specifics of Snowden’s projection, and can he successfully find a role?

Positives: Tall, somewhat athletic linebacker who plays tough, smart football. Instinctive, remains disciplined with assignments, and does not bite on ball fakes or mindlessly run around the field. Flows well to the action and displays speed in pursuit. Fast up the field and gives effort. Solid run defender who wraps up ball handlers at the point of attack.

Gets depth on pass drops and covers a lot of area on the field. Previously showed the ability to rush the passer and possesses terrific edge speed. Fluid when asked to twist or stunt upfront and sells out on the blitz.

Negatives: Has a thin build and struggles taking on blocks. Has a high-cut build, which will make it easy for opponents to take his legs out. Struggled with injury last season.

Analysis: Snowden was a three-down defender at the college level and consistently produced at Virginia. He projects as a 3-4 linebacker but must add bulk to his frame and get stronger, otherwise, he will struggle in the NFL.

As you might expect, Charles Snowden was a fairly large human being even before he lined up at linebacker for Virginia. In high school, Snowden was a 6-foot-6, 200-pound prospect from the D.C. area. He played both linebacker and wide receiver for St. Albans School for Boys.

In spite of his measurements, Snowden wasn’t a top recruit. He instead ranked as a low three-star prospect, and he received little national interest. At the end of his recruiting cycle, he decided to sign with a local team in the Virginia Cavaliers. There, he’d get the chance to put his rare physical talents to use.

Snowden still needed to refine his game and add weight when he arrived at Virginia. Nevertheless, he saw playing time as a true freshman. Through that experience, he was able to show off his developmental potential. In his first season, Snowden logged 13 total tackles, 2.0 tackles for loss, and 1.5 sacks, while also forcing a fumble in limited action.

Snowden’s success in his first year led to an increased role in his second season. He was a full-time starter as a true sophomore, amassing 62 total tackles, 7.5 tackles for loss, 2.5 sacks, two interceptions, eight pass deflections, and a forced fumble. Snowden’s 2018 season was a springboard, off of which he’d increase his production in 2019 and 2020.

In his junior and senior seasons, Snowden started to gain more conference-wide recognition. In 2019, Snowden put up 72 total tackles, 11.0 tackles for loss, 5.0 sacks, four pass deflections, and a fumble recovery. He earned praise as an All-ACC honorable mention in the process. Although he could have declared for the 2020 NFL Draft, he chose to stay and put up one more good year. That’s exactly what he did.

In 2020, Snowden was at his most developed and his most versatile. The senior Virginia linebacker accumulated 44 total tackles, 10.0 tackles for loss, 6.0 sacks, three pass deflections, and a forced fumble in eight games. He was named a second-team All-ACC selection and received first-team hype in some corners. He also earned an invitation to the 2020 Reese’s Senior Bowl. At that showcase, he’ll be able to accentuate his rise to the 2021 NFL Draft.

Off measurements alone, Charles Snowden oozes potential. He’s 6-foot-7, 240 pounds, and he has exactly the kind of length you’d expect for a player with that frame. Snowden’s size advantage is clear on tape. His length allows him to take up a ton of space in zone coverage, and as a rusher, he’s able to get his hand up and get pass deflections by disrupting the passing lane. He can also use his length to magnify his play strength, which is a unique and notable plus.

Snowden’s length is the clear building block of his game, but he also has the wherewithal to use it effectively. In run defense, Snowden’s long arm allows him to maintain leverage and keep himself clean against linemen, and he also has the mobility to carry that block to the edge, where he can close off outside runs. His length also allows him to make rangy tackles. His tackle radius is extremely large, and he can wrap up ball carriers in pursuit.

As a mover, Snowden is a mixed bag, but he has good flashes of just about every athletic trait. His primary athletic trait, however, might be his fluidity. As a pass rusher, Snowden has a nice double-move in his arsenal, with which he showcases impressive lateral agility and smoothness in his motion. That’s something he can show more of in open space, but it’s there, nonetheless.

What are the issues with Charles Snowden’s game?

While Snowden is tall and lanky, he’s not dense or powerful. As mentioned above, his length can mitigate this to an extent, as his length gives him natural leverage both against blocks and in tackling situations. However, Snowden can get handled fairly easily in one-on-one pass rushing situations with his slight build, and he doesn’t always bring the explosiveness to compensate.

Although he has flashes of exceptional initial burst, Snowden is inconsistent there. The Virginia linebacker is more of a long strider who often needs space to build up speed. In situations where he needs short-area burst, this will hurt him unless he can unlock his explosiveness on a more frequent basis.

It’s worth noting that when he does have a runway, Snowden’s speed is impressive for his size. He also shows enough flashes to assume that he has the necessary tools. Among other things, Snowden isn’t a super streamlined mover in space, and he can also be late to react on plays. He also takes suspect angles at times.

That said, he does show flashes of quick reaction speed as well. Thus, it might not be a habitual processing problem, but instead a lack of refinement with his reads and his keys. When Snowden puts it all together on a given play, he’s a problem for opposing offenses. But as of now, he’s fairly raw, and he needs to bulk up a bit to find a consistent role at the next level.

Charles Snowden’s height and length will get him noticed on their own volition. However, he brings more than that to the field. Snowden is also an able pass rusher with good anchor and lateral mobility, and he’s able to set the edge in run defense. Additionally, Snowden has fairly good positioning awareness in zone coverage, and he has enough athleticism to cover tight ends and running backs, even if he has room to be more efficient.

Snowden is a good athlete, but he may even be better than he appears in that category. Explosiveness is perhaps the largest box the Virginia linebacker needs to check. He has occasional flashes of first-step quickness on tape, but it doesn’t happen consistently enough. If he logs elite explosiveness numbers, it will confirm his ability to be molded into a weapon.

Whatever the case, Snowden clearly has upside, particularly as a versatile hybrid linebacker in a 3-4 scheme. However, he could also mesh as a 4-3 outside linebacker with the right team. A 3-4 role would emphasize his versatility to rush and cover on a down-to-down basis. A 4-3 role, however, would allow him more space to accelerate and use his range. It would also give him more free rushing opportunities on the blitz.

Given the questions that come with his rare profile, he’s likely an early-to-mid Day 3 player at this point. Nevertheless, he can rise to Day 2 if he confirms his athletic traits at the Senior Bowl and the Combine. For now, in the middle rounds, he projects as a good addition for teams like the Jets, Cardinals, Patriots, Browns, and Eagles.

Charles Snowden is one of the more perplexing players in the 2021 NFL Draft but in a good way. He has uncommon physical traits, and as he’s shown on tape, he also has good athleticism to pair with his size. If the Virginia linebacker can put it all together and find a role that suits him at the NFL level, he can be a versatile, disruptive, stress-inducing defender for opposing offensive coordinators.