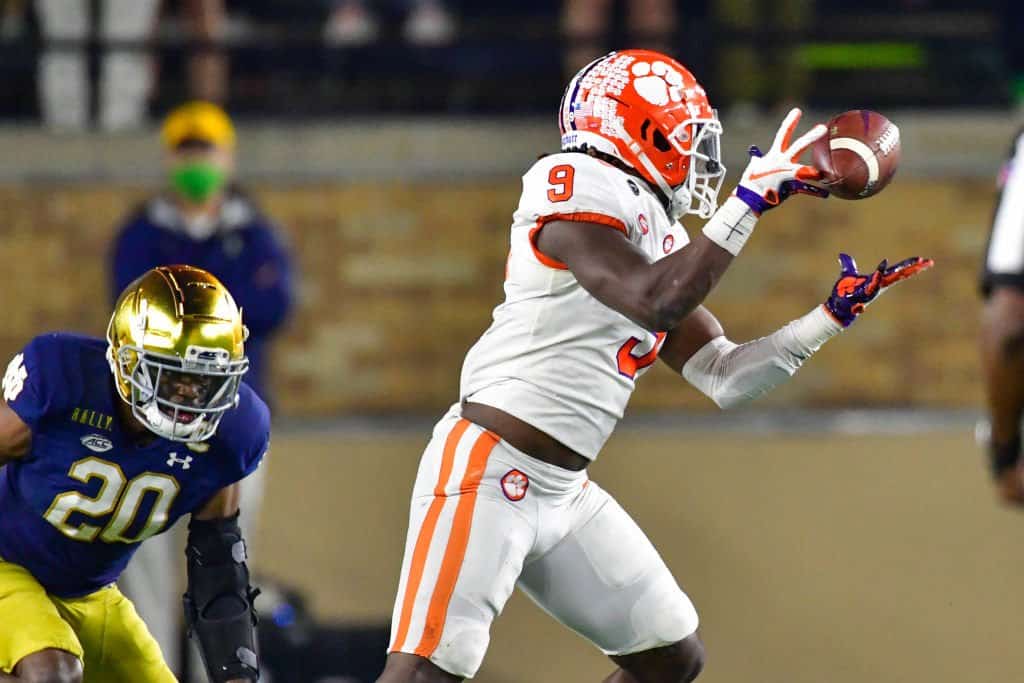 While running backs in general are replaceable, certain skill sets aren’t. Running backs who bring the desired degree of talent and versatility find themselves more coveted than others. Clemson running back Travis Etienne most certainly brings the desired talent to the table. Travis Etienne is a legitimate contender for the RB1 mantle in the 2021 NFL Draft, and his play style has tantalizing potential in the modern NFL.

Positives: Smart, hard-working ball carrier with a well-rounded game. Patient, waits for blocks to develop and finds the hole. Displays solid short-area quickness, cuts back against the grain, and consistently runs north and south. Tough to bring down, keeps his feet moving, and picks up yardage off initial contact. Works hard whenever the ball is in his hands.

Will pick and choose his way on the inside and effectively uses blocks. Displays tremendous focus as well as concentration as a receiver, tracks the pass in the air, and makes the difficult reception with defenders draped on him. Helps the quarterback sell ball fakes.

Negatives: Not an overly creative ball carrier who makes defenders miss. Plays to one speed and not a breakaway threat despite his 40 time.

Analysis: Etienne was a terrific running back for Clemson who was productive carrying the ball and catching it out of the backfield. His skills and game translate well to the next level, and Etienne has scheme versatility that will enable him to start on Sundays.

Athleticism is where it starts for a lot of players. That’s something Etienne clearly had even at an early age. As a senior in high school, Etienne had a 4.43 40-yard dash and a 37.5-inch vertical on record, while standing at 5-foot-10, 199 pounds. At Jennings High School in Jennings, Louisiana, Etienne’s natural traits placed him on a tier above his counterparts. His senior production reflected that. In 2016, his final high school season, Etienne ran for 2,459 yards and 35 touchdowns on 211 carries.

Averaging 11.7 yards per carry and around six carries per touchdown is no small feat. Thus, Etienne generated copious amounts of interest as a member of the 2017 recruiting class. A four-star prospect, Etienne had offers from Alabama, Oregon, and LSU, among others. But despite having an offer from his hometown team, Etienne instead chose to sign with the defending National Champion Clemson Tigers.

Travis Etienne’s career as a Clemson running back

Travis Etienne’s career at Clemson has been defined by an unending tendency to make plays for his team. Some players have to wait to earn extended roles, but Etienne was a premier playmaker for the Tigers in his true freshman season. In that year, Etienne logged 766 yards and 13 scores on 107 carries.

Etienne’s freshman season earned him third-team All-ACC recognition, but the 2018 campaign saw him truly explode onto the college football stage. Through Clemson’s 2018 National Championship run, Etienne was borderline unstoppable, rushing for 1,658 yards and 24 touchdowns on 204 attempts.

2018 was the statistical peak of Etienne’s collegiate career, but he by no means regressed in 2019 and 2020. Etienne still maintained his core competency as a versatile playmaker for the Tigers. He also vastly expanded his availability as a receiving weapon. In 2019, Etienne caught 37 passes for 432 yards and four scores, and in 2020, he was even more impactful in that role, bringing in 44 catches for 524 yards and two scores.

Etienne’s decision to come back for his senior season was surprising, but it may have helped him in the long run. Etienne further solidified his prowess as a pass catcher. He also reached some key milestones. Etienne broke the NCAA record for most games with at least one touchdown. Additionally, he exceeded 100 touches and double-digit touchdowns in every season. Etienne achieved a level of consistency that’s rarely seen. That’s just one aspect of his game that makes him a very appealing draft prospect.

Hyperbole has no place in draft evaluation, but it’s not entirely hyperbolic to say that Travis Etienne is a human highlight reel. There is room for improvement in his game — as we’ll get to shortly — but the Clemson running back has an insane pallet of natural traits, which separates him at the running back position.

What stands out the most is Etienne’s burst and speed. Etienne might be the quickest accelerator in the 2021 running back class. He can gear up over extremely short distances, and his elite straight-line explosiveness swiftly negates tackling angles and allows him to seep into space downfield. Etienne’s burst helps him hit holes with ferocity, and it also enables him to make any given play a foot race. From there, he has serious burners — having ran a 4.45 at his pro day — with which he can take runs to the house.

Other qualities besides Travis Etienne’s explosiveness

The explosive element is Etienne’s most marketable trait, but his game is much more complete than people realize. Etienne is built fairly well at 5-foot-10, 215 pounds, and his lower body is particularly dense. That’s where his explosion capacity derives from, but he also brings excellent contact balance as well. Etienne’s short-area burst and twitch allows him to frequently avoid direct contact, but even when he does experience direct contact, he can bounce off hits and recover quickly with his balance and flexibility.

Having an elite combination of speed, explosiveness, and contact balance is a foolproof equation for RB1, but on top of that, Etienne has also developed immensely as a receiver since the start of his college career. There was a time when catching the football out of the backfield was a struggle for him, but he developed a feel for receiving, and his traits naturally contribute to success in that phase.

Teams that can get him in space with screens, swings, and wheel routes will be rewarded by his explosiveness in space. As he continues to grow more comfortable, his potential uses should only increase at the NFL level.

Is there anything wrong with Travis Etienne’s game?

No prospect is perfect, and that rings true with Travis Etienne. With that being said, there’s a difference between mere imperfections and notable red flags. Luckily for Etienne, he doesn’t have any red flags or glaring flaws in his game. Most of his issues are fixable, and the Clemson running back’s physical traits annul a lot of his inconsistencies.

Most notably, Etienne’s vision can improve. It’s not a liability, but there are times when he defers to his explosiveness and rockets straight forward, instead of staying patient and waiting for holes to open up. Thus, he has less consistency as an inside runner. Etienne’s upper body also presents a potential weakness for defenses.

Etienne’s lower body is dense, but his upper body is less so. Thus, players who can initiate contact in that area, without drawing penalties, can minimize Etienne’s contact balance.

Alabama’s Najee Harris is a better pure runner than Etienne by virtue of his superior size and vision. However, comparing the two is splitting hairs. Etienne has the speed, explosiveness, agility, contact balance, and receiving ability to thrive in the modern NFL, and he also runs with unmistakable energy and drive. He’s a worthwhile investment early in the draft, and Round 1 can’t be out of the question.

It’s almost easier to list the teams that wouldn’t find value in adding Travis Etienne because that list is much shorter. Etienne’s positional value may be decreasing, but the value of his skill set has never been in higher demand. Players who can both create space and maximize their allotted space in numerous ways are intrinsic to modern offensive success. That’s the kind of player Etienne is.

Of course, there’s more to deciding Etienne’s best fits than simple schematic evaluation. Teams also need a reason to consider running backs early in the draft, and they need to be in the right range for Etienne. That range is likely late Round 1 to late Round 2, although there is some wiggle room on the tail end.

The Miami Dolphins and Pittsburgh Steelers are a couple of teams that could consider selecting Etienne in the first round, if Harris is gone. Miami also has a second-round pick that might be in Etienne’s range, and the value would be much better there. Teams like the New York Jets, San Francisco 49ers, and New England Patriots may also qualify as potential second-round fits.

Regardless of position, Etienne is a high-quality offensive catalyst, and his expanding versatility only bodes well for his professional development. For teams in search of a weapon and a creation agent, Etienne is truly one of the best.