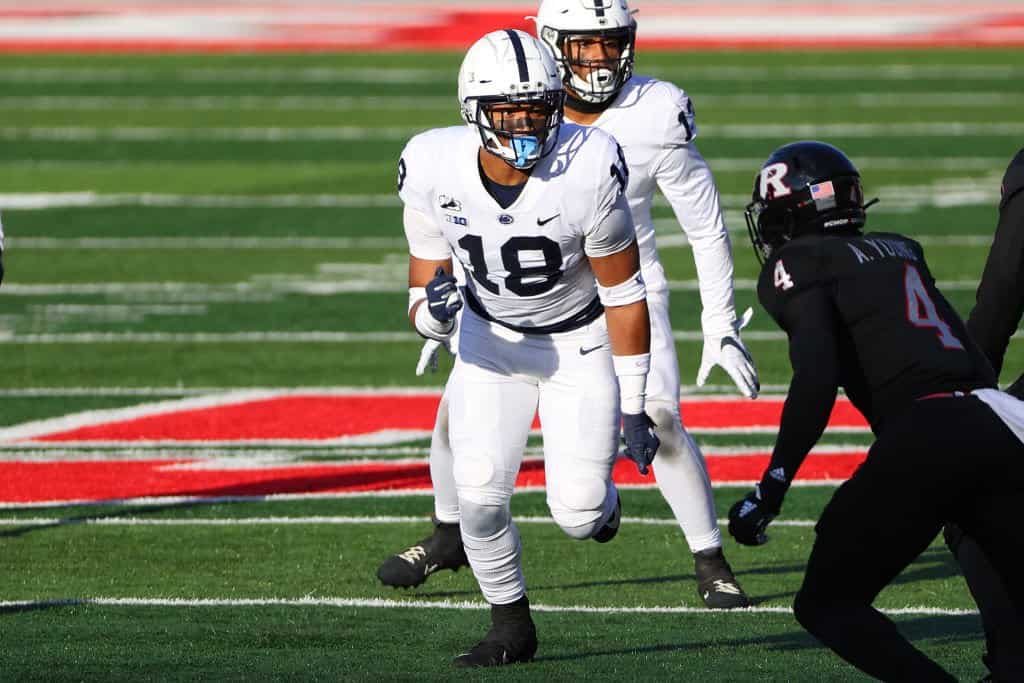 Jayson Oweh gets all the attention. But in truth, the guy across from him might be just as good, if not better. Productive and saturated with potential in his own right, what kind of projection does Penn State edge rusher Shaka Toney bring to the 2021 NFL Draft?

Positives: Athletic, explosive college pass rusher with a streaky game. Displays good change-of-direction skills and fluidly gets down the line of scrimmage chasing the action. Possesses excellent movement skills, works his hands throughout the action, and gets leverage on opponents.

Fluid if asked to twist or stunt, fires through the gaps behind the line of scrimmage, and gets outside the box to make plays. Flashes an explosive first step off the snap and plays with excellent balance as well as body control.

Negatives: Often looks like he’s playing half-speed and disappears for stretches. Easily taken from the action by a single blocker. Undersized for a defensive end and will be a liability against the run at the next level.

Analysis: At the top of his game, Toney displays himself as an outstanding pass rusher who opponents struggle to stop. Unfortunately, he does not consistently play at a high level and disappears for long stretches. He’ll be a situational pass rusher at the next level who must learn to play standing over tackle, and more than anything else, show up on every down.

Shaka Toney often gets written off as the more experienced, less athletic counterpart to Jayson Oweh. That assumption does a disservice to Toney, who has immense athletic talent as well. That talent was apparent as early as high school when Toney logged a 4.62 40-yard dash and a 32.5-inch vertical at 6-foot-3, 215 pounds.

Toney’s production only reinforced his potential. In his senior year of high school, Toney accumulated 21.0 sacks and 11 pass deflections, using his athleticism to separate himself from his opponents. Despite his early success, the Philadelphia native was labeled as a mere three-star prospect. He was the 89th-ranked edge rusher, and he also fell outside the Top 20 in his state.

Toney’s offers came primarily from the ACC, as teams such as Pittsburgh, North Carolina, and Duke vied for his services. However, the Penn State Nittany Lions soon became involved in the process, and Toney jumped at the chance to play college football in-state, with a program widely revered for its development of NFL talent.

Toney predictably redshirted his freshman season in order to gain weight and prepare for the 2017 campaign. The redshirt year for Toney paid off. By the start of the 2017 season, Toney elevated his weight to 236 pounds and began to show flashes of a more complete player. In a rotational defensive role, Toney managed to log 17 tackles, 3.5 sacks, and 6.0 tackles for loss. He also added two forced fumbles, earning freshman All-Big Ten honors for his play.

In 2018, Toney reprised his role as a top rotational player on the edge, and his penchant for playmaking continued to shine through. Toney played in every single game on the season, stacking up 5.0 sacks and 7.0 tackles for loss over that span. He also mustered two pass deflections and a forced fumble for good measure.

The 2019 season saw Toney take on a full-time starting role opposite Yetur Gross-Matos. A redshirt junior, Toney continued to produce for the Nittany Lions, earning 6.5 sacks and 8.0 tackles for loss in 13 starts. Toney kept climbing up the ladder, this time earning second-team All-Big Ten recognition from coaches. Toney could have declared for the 2020 NFL Draft, but he instead decided to stay in school to try and compete for a championship in 2020.

The 2020 season didn’t go as planned for the Nittany Lions, but Toney again had a quality year. The redshirt senior was designated as a team captain, and he started seven of the team’s nine games. In those games, Toney put up 31 total tackles, 5.0 sacks, 7.5 tackles for loss, a forced fumble, and a pass deflection. Toney joined Jayson Oweh as a first-team All-Big Ten selection and ended his individual career with his stock trending up.

Toney never had a dominant season for Penn State. However, his 2020 campaign was very strong, and his underlying consistency reflects well for him. Over four seasons, Toney recorded 111 total tackles, 20.0 sacks, 28.5 tackles for loss, four pass deflections, four forced fumbles, and a fumble recovery. That’s steadiness embodied, and in the right system, Toney might be an even better pro.

Shaka Toney likely won’t be in the first-round conversation, but he has a lot of nice traits that could be appealing to NFL teams on Day 2 of the 2021 NFL Draft. Toney’s experience is a plus for him, but he also offers developmental upside to tap into, and he’s a good investment to make.

Toney’s athletic traits stand out right away on tape. He has very good explosiveness off the snap. He’s also one of the bendiest edge rushers in the 2021 NFL Draft. Toney’s explosiveness allows him to get upfield and get a step on his man. Once he does that, he has the bend and torso flexibility to turn the corner with impressive sharpness. Toney is already relatively slight for an edge rusher, and when he reduces his surface area, he can be even harder to handle for linemen.

Using his athleticism as a foundation for other traits

Another thing that stood out to me when watching Toney was his ability to multitask when bending around the edge. Toney’s bend by itself is incredibly effective, but Toney also has the ability to use his hands proactively as he accelerates around the corner.

Whether it’s a swipe or a dip-and-rip combo, Toney has a working, developing knowledge of different moves. Not only that, but he also understands how to use those moves in tandem with his athletic traits in real time. That’s something not all edge rushers can put into action. Consequently, it makes the Penn State edge rusher an impressive prospect.

Toney also has exceptional lateral agility. This helps him divert course when needed. Because he’s so dangerous rushing upfield, linemen sometimes try to over-correct to the outside to negate that upfield rush. But with his abrupt lateral agility, Toney can cut inside and regain positional leverage. Thus, he can reopen a path to the quarterback.

What are the holes in Shaka Toney’s game?

Toney has a great deal of upside, but his athletic profile isn’t without its minor flaws. While Toney is very explosive and flexible, he lacks the ideal length and width of an edge rusher. His build is dense and compact, and he’s shown the ability to pack an impressive amount of power into his punches through speed-to-power progressions. But he somewhat lacks in natural play strength and leverage. This can hurt him, especially in run defense.

In run defense, upfield penetration isn’t as important as standing one’s ground. With his lean but slight frame, the Penn State edge rusher can get handled relatively easily by bigger, stronger linemen. His competitive flare and continual hand development suggest he can improve, but at the same time, his frame and wingspan simply lower his ceiling in that area.

Because of mitigating factors as a run defender, Toney might not ever be an elite every-down option on the edge. However, Toney is truly one of the more complete pass rushing prospects in the 2021 NFL Draft. In an NFL where pass rushing is becoming increasingly valuable, that bodes well for Toney’s stock.

As mentioned earlier, Toney likely doesn’t go Round 1. Other edge rushers have better size profiles than Toney, and similarly-sized prospects, like Azeez Ojulari, were more productive. Toney will also be almost 24 years old when the season starts. When a draft class is as closely congested as this one, age can be a sticking point.

Having said that, Toney has enough pass rushing upside to be a Day 2 or early Day 3 pick. With his limitations in run defense, that shouldn’t be taken lightly. Toney can be an excellent pass rushing catalyst in the right situation. Despite his size, he often played in three-point or four-point stances, so he has enough versatility to be a 4-3 end or a 3-4 OLB.

Teams that could use Shaka Toney on their roster

On Day 2, there are plenty of teams that could use Toney’s talents, provided they bypass EDGE in Round 1. The Ravens, Broncos, Dolphins, Buccaneers, and Browns are all fun to think about, but you could almost name a dozen more. Toney’s upside, combined with his experience and leadership ability, dictates that he’ll be an easily marketable prospect. This is especially true if he tests well at the NFL Combine and performs well at the Senior Bowl.

With his burst, bend, twitch, and hand usage proactivity, Penn State’s Shaka Toney has a draft profile that’s conducive to success as an edge rusher. Although his outlook as a run defender is limited, Toney meshes with where the league is trending, and if his testing confirms his athleticism, he can be a coveted high-value weapon in the 2021 NFL Draft.