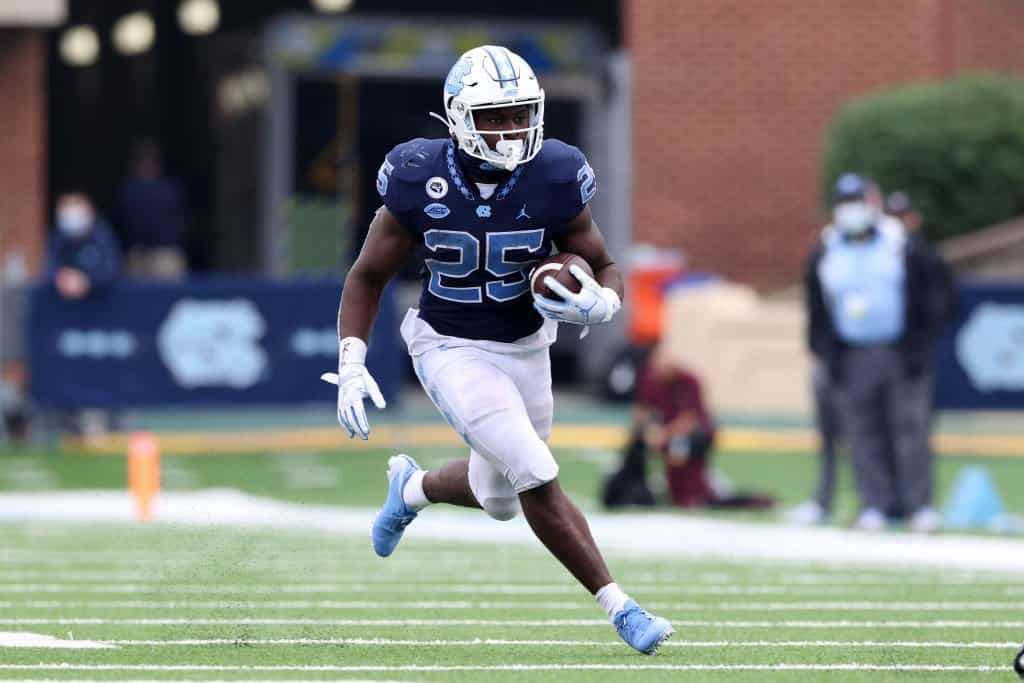 He was a virtual unknown before this past year, but a monster 2020 season put North Carolina running back Javonte Williams on the 2021 NFL Draft radar. 11 dominant games and 22 total touchdowns later, Williams is a prospect who’s starting to get hype as a candidate for RB1. Is the hype warranted? What does Williams bring to the fold, and how does he match up with Travis Etienne and Najee Harris?

Positives: Large, explosive downhill ball carrier whose game is on the upswing. Possesses a smooth, fluid style and runs with power. Displays good vision as well as instincts, finds the running lanes, and will pick and choose his spots. Displays a burst of speed and gets through the hole with authority. Strong and picks up a lot of yardage off initial contact.

Drags defenders for yards at a clip and falls forward when tackled. Works runs and drives his shoulders through defenders, barreling over opponents for extra yardage. Consistently runs north and south. Terrific pass catcher out of the backfield, adjusting to the errant throw and making the reception away from his frame.

Negatives: Not a creative ball carrier who makes defenders miss. Cannot turn the perimeter and lacks the speed to turn the corner.

Analysis: Williams is a bruising ball carrier who doles out a lot of punishment, running with an aggressive style and consistently finding ways to pick up yardage. He’s best running downhill, but I fully expect Williams will break in with the first team at the next level if put in the proper system.

Originally from Teachey, North Carolina, Javonte Williams attended high school at Wallace-Rose Hill. There, he made a name for himself as a potential college football prospect. By his senior year, he was a three-star recruit, with a moderate degree of interest from college programs.

Despite his success, Williams never managed to make a strong impression nationally. He was only the 94th-best running back prospect in the nation, and he ranked well outside the Top 1,000 prospects. Luckily for Williams, the North Carolina Tar Heels, his hometown team, offered him a chance to play football for them. He accepted and made the two-hour drive to Chapel Hill to further his football career.

Javonte Williams’ career as a North Carolina running back

As a true freshman, Williams saw the field in a rotational role for North Carolina. The Tar Heels still had a bit of a void at running back after losing T.J. Logan and Elijah Hood to the draft in 2017. Thus, Williams helped fill that gap. He wasn’t the highest-volume back on the team in 2018, but he managed to accrue 224 rushing yards and five rushing touchdowns on 43 carries.

In 2019, Williams took on an increased role in the Tar Heels’ backfield. Playing in 13 games, Williams logged 166 carries for 933 yards and five touchdowns. He also improved his production as a receiver, putting up 176 yards and a touchdown. It was a welcomed improvement for the true sophomore, but it was only a glimpse of what would come in 2020.

With his 2020 campaign, Javonte Williams officially announced his presence as one of the top playmakers in college football. In eleven games, Williams amassed 1,140 yards and 19 touchdowns on 157 carries. He also developed as a receiver, catching 25 passes for 305 yards and three scores. His year was punctuated by an otherworldly performance against the Miami Hurricanes, in which Williams rumbled for 236 yards and three scores on 23 attempts.

Williams’ success made him a borderline Heisman candidate, and delving further into the numbers, his uptick in efficiency was astounding. Williams carried the ball nine fewer times in 2020 than he did in 2019. Despite this, he logged 207 more rushing yards and 14 more touchdowns. Williams ran for an excellent 7.3 yards per carry. He also found the end zone every 8.2 touches.

Williams helped North Carolina reach the Orange Bowl. However, he decided to opt out of the team’s last game and prepare for the 2021 NFL Draft. His Miami game left the best final impression he could have hoped for.

You don’t want passive players at the running back position. Players who are hesitant and reserved beyond their athletic traits tend to be limited at the NFL level. If you’re wondering about Javonte Williams, you’ll be happy to know that he’s the exact opposite of passive when it comes to running the football.

Williams is an incredibly dense, compact runner, standing at around 5-foot-10, 212 pounds. His size likens him to a bowling ball in the open field, and he’s difficult to bring down on first contact. Williams broke tackles at an extraordinary rate in 2020, and he primarily accomplished this with his elite contact balance and tenacious energy as a runner. Williams has the sheer mass to absorb direct contact, and he has the balance to stay on his feet and extend plays.

Taking into account Williams’ physicality alone, he sounds like a power back. But he’s much more than that.

Williams has solid athleticism, which he uses to compound his aggressive mentality. Williams’ explosiveness stands out as his most apparent athletic competency. He can gear up extremely quickly, especially when he has open space to accelerate. Once Williams has open space, he carries a dangerous amount of momentum with him, and defensive backs struggle to engage him directly.

Williams also has good agility and speed. He’s not a burner with breakaway traits, but he has enough speed to last in space. He ran a 4.57 at his pro day, but compensated with a 36-inch vertical and a 123-inch broad jump. Nevertheless, Williams’ agility and suddenness are more marketable than his speed. He’s not tremendously shifty in open space, but he has enough lateral freedom and elusiveness to disrupt tackling angles for defenders.

If he wasn’t already enticing enough, Williams also has good vision and receiving ability. The North Carolina running back uses a nice, quick shudder step in the backfield when processing his holes, which he uses to maintain his potential energy. He then has the explosiveness to choose a lane decisively.

His receiving ability is a pleasant surprise. He could have been used more in that department, but he has good catching ability out of the backfield. His burst allows him to find open space quickly, and his contact balance is conducive to yards after the catch.

Are there any glaring holes in Javonte Williams’ game?

Given the lack of consensus on Williams, I expected his game to be more susceptible to scrutiny. However, I instead came away impressed. Although he’s not a perfect prospect, Williams has a well-rounded skill set, and he has an elite trait to build off of with his contact balance.

He’s not quite as agile as his counterpart Michael Carter. Carter also can be a bit more consistent with his vision, as well as with his pass blocking. Williams’ mild inconsistencies can lead to occasional lapses in production, such as his game against Notre Dame. However, Williams has most of the qualities you want in a runner. He runs angry, and he has the explosiveness, density, contact balance, and acute lateral twitch to be a premier rusher.

As of now, Javonte Williams is locked in as RB3 of the 2021 NFL Draft for me. Among the other running backs, he’s the closest to Etienne and Harris. He’s not quite at their level; Etienne has the best creation capacity in the draft, and Harris is bigger, more polished, and more impactful as a receiver. But the North Carolina running back isn’t far behind with his upside, and he’s an exciting option early on Day 2 of the draft.

Related | Javonte Williams Dynasty Value: Where to draft him in 2021 rookie dynasty drafts?

For teams in need of a workhorse running back, Javonte Williams offers the requisite skill set, and he might be acquired at a better value than the backs above him. His contact balance is what jumps off the screen, but Williams truly has modern NFL versatility, and that mitigates the risk factor involved with his selection. He’s also set to turn 21 years old in April, so he doesn’t have too much wear on his tires.

In the Day 2 range, teams like the Miami Dolphins, Pittsburgh Steelers, Atlanta Falcons, and Arizona Cardinals could be good fits for the North Carolina running back. Teams in need of an immediate, high-value boost for their running game will covet Williams, and he also has enough ability as a receiver and a pass blocker to provide utility there as well.

Javonte Williams’ breakout season was awe-inspiring, but it also dictates that he’s not quite as established as other top running back talents. Regardless, Williams has the tools to produce in a variety of schemes at the NFL level. He’s a powerful playmaker who brings energy and play extension potential. Those are traits that can invigorate offenses in need of life.