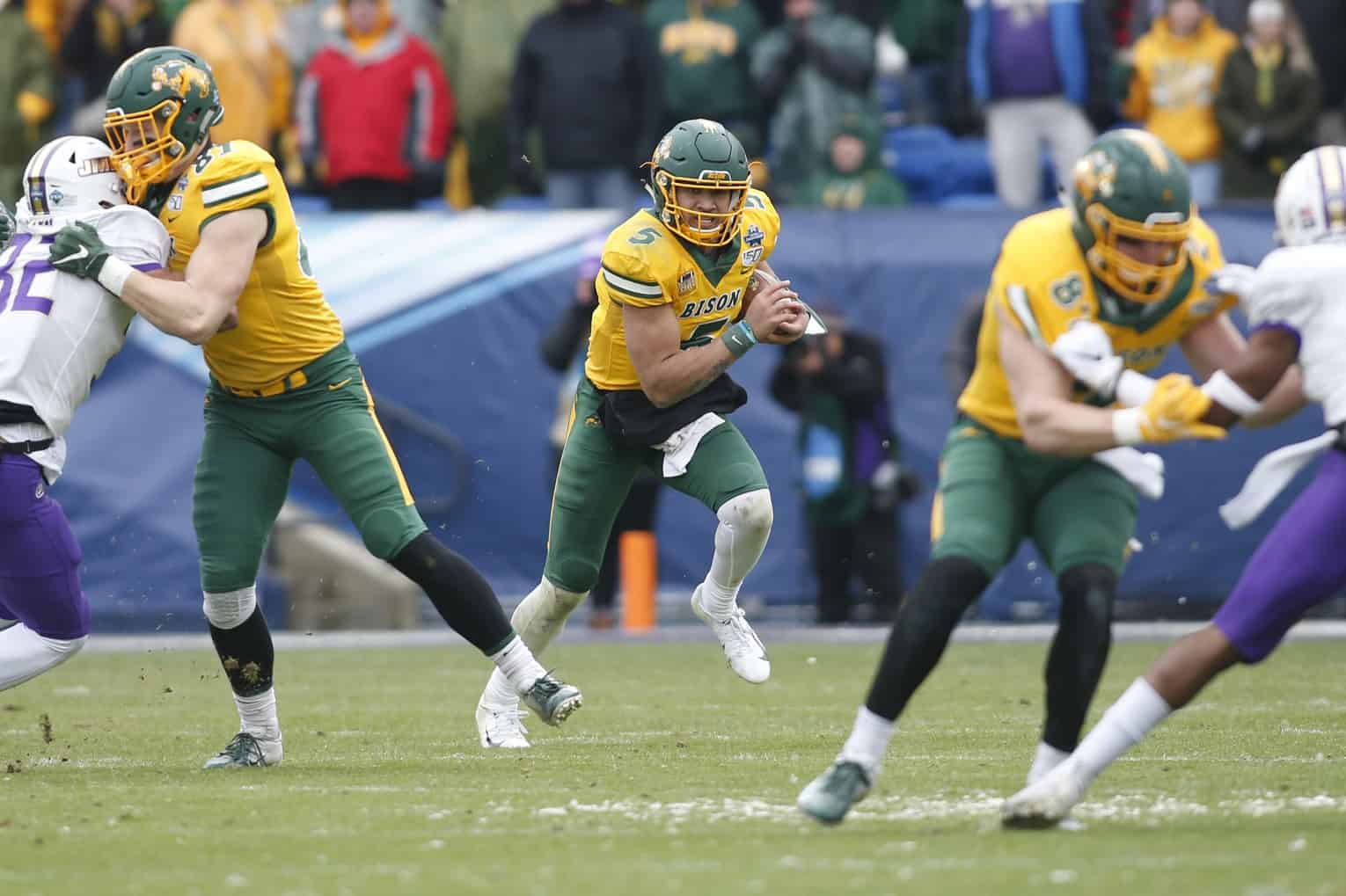 As per expectation, the Jaguars take the top quarterback available to kick off their rebuild. Trevor Lawrence has been considered an elite NFL prospect since he was a 17-year-old high school player in Georgia. He possesses excellent physical tools, a high football acumen, natural accuracy, and an elite aesthetic.

Urban Meyer has a no-brainer with the first overall selection, and it’s hard to imagine a reality where Jacksonville goes anywhere else with this pick.

Expect Lawrence to be the starter from Day 1 and frontrunner for Offensive Rookie of the Year. I also wouldn’t be utterly shocked if the Jaguars were fighting for a playoff spot as soon as next season. The Jaguars kick off this 2021 First Round NFL Mock Draft by selecting their franchise QB.

Despite former first-round pick Sam Darnold still on the Jets roster, it seems more and more likely that New York will be taking BYU QB, Zach Wilson. Wilson was one of the most exciting players in all of college football last season. He led BYU to its highest national rankings finish since 1996.

Wilson has a knack for big plays. He loves pushing the ball down the field, buying time with his legs, and impressively placing the ball where only his guys can catch it. However, I have concerns about his ability to win from the pocket, and I believe he possesses the lowest ceiling of the top four quarterbacks.

San Francisco made the first big splash by trading up from pick 12 with Miami to get their QB of the future. Coming into the 2020 season, Ohio State’s Justin Fields was the presumptive QB2. Now at a “value”, Kyle Shanahan has a QB who fits his system perfectly and owns immense upside.

Related | Justin Fields Dynasty Value: Where to draft him in 2021 rookie dynasty drafts?

Fields possesses one of the best arms in the class and excels on drive throws — a critical need for a QB in the NFL. Add in his mid-to-low 4.4 speed, Justin Fields is the complete package.

It’s still unclear what the Falcons are going to do with the fourth selection, but quarterback remains an option. The Falcons could decide one of the quarterbacks available to them is too good to risk passing on as a contingency plan for Matt Ryan in the long-term.

Trey Lance has arguably the highest ceiling of any quarterback in the 2021 NFL Draft. He has a world-class arm, is a superbly developed runner, and makes “wow” throws regularly. The concerns about his level of competition and experience are warranted. Still, a team like Atlanta is a perfect situation for Lance to sit for a season and learn the inner mechanisms of the NFL behind a consummate pro in Matty Ice.

Sewell is an elite offensive tackle prospect who possesses dominant play-strength and requisite athletic ability, yet, he will be one of the youngest prospects in the entire draft class.

Penei Sewell never played a college football snap in his twenties and is projected as an elite NFL offensive tackle. With offensive line holes surrounding franchise QB Joe Burrow, outside of LT Jonah Williams, Sewell can kick over to right tackle and immediately solidify the position.

In a span of minutes, Miami moved down and then back up in the draft with a swap with the Eagles. Clearly, they were wanting to get back into range for one of their favorite prospects. While all the wide receivers are on the board, the Dolphins take arguably the best athlete in the NFL Draft in TE Kyle Pitts. Do not let the positional designation fool you, Pitts is an offensive weapon who can play in the slot or out wide. Mike Gesicki would not see his role change at all, and Pitts would move around the field creating an instant mismatch for Tua Tagovailoa to exploit.

After losing Kenny Golladay to the Giants in free agency, the Lions select a prospect with a similar skill set in Ja’Marr Chase. Chase dominates defensive backs at the catch point, out-muscling them and using his elite hands to bring down contested balls. He’s got decent size and average to slightly above average athletic ability. He has some work to do developing as a route runner but displays elite flashes of vertical separation despite not possessing blazing speed.

After Patrick Surtain II‘s robust pro day testing, he seems to be a near-lock to go in the top 10. With Carolina missing out on the top four quarterbacks and Kyle Pitts, taking their top cornerback is logical. The Panthers desperately need more talent on the defensive backfield, and Surtain could be the CB1 Matt Rhule is looking for in his defense.

Surtain is a high IQ player who always plays with a level head and possesses the size, length, and long speed to be an elite boundary cornerback.

Gregory Rousseau, typically considered an EDGE, could be used all over the defensive front in Denver’s 3-4 defense. With Von Miller seemingly nearing the end of his Broncos tenure, Rousseau could rotate as a rotational pass rusher on both the interior and edge until he’s ready to take over the full-time outside linebacker spot opposite of Bradley Chubb.

Rousseau didn’t play in 2020 after finishing second in the nation in sacks last year, behind only eventual second overall pick and Defensive Rookie of the Year Chase Young. Here, the Broncos are banking on the upside and hoping he develops into what he can be.

It sounds like the race for CB1 is down to two players: Patrick Surtain II (drafted eighth overall in this mock) and Jaycee Horn. Horn has the ideal attitude and mindset to be a CB1. He’s confident to a fault and a talker. Horn loves getting under the skin of receivers and sticks to them like glue from start to finish.

He exceeded expectations for his pro day testing and fills a massive need for a Cowboys team preparing to contend in an improved NFC East in 2021.

The first shocking pick from the simulator is the Giants taking Christian Darrisaw. While the 11th pick is good value overall for Darrisaw, the Giants already have two quality young tackles that they expect to develop into long-time starters. However, if they view Darrisaw as a dramatic upgrade over Thomas at left tackle, the selection could make sense.

Left tackle is one of the league’s premium positions, and it’s essential to make sure you’re comfortable with who you’re sending out every week. In this situation, one of Thomas or Peart likely moves to guard.

The Eagles have been in the receiver market all along and make a smart decision to move back and acquire more picks. Philadelphia selects the reigning Heisman Trophy winner in Alabama’s DeVonta Smith. While the talk has been about his weight, the play on the field speaks for itself.

Smith is the best route runner in this class and is a tactician on the line with his releases. Smith will be Jalen Hurts‘ favorite target thanks to his hands and surprising catch radius. Despite being nearly five inches shorter, Smith has a half-inch wider wingspan (78.5″) than Tennessee Titans WR A.J. Brown (78″).

Upgrading the offensive line has been a priority for the Los Angeles Chargers in the offseason. They added Matt Feiler, Corey Linsley, and Oday Aboushi during free agency and at pick 13, double-down on the position. Rashawn Slater is a bully on the offensive line and went through a trial by fire against the best of the Big Ten. At 6’3″, there are questions if he has the length to be a left tackle at the next level. After the upgrades the Chargers have already made going into 2021, Slater could move to guard and thrust the Chargers O-line into elite status.

In an era of space-predicated offense, it’s a requisite to have players who can lock up in man coverage both in the secondary and in your linebacker unit. Here, the Vikings invest heavily in the idea of versatility, adding Jeremiah Owusu-Koramoah to a room that already has Eric Kendricks and Anthony Barr.

With Barr as the SAM, Kendricks as the MIKE, and JOK as the WILL, the Vikings could realistically run their base defense without sacrificing any coverage ability. Not a likely outcome, but one that I’m certainly interested in.

With New England’s pick, they continue their trend of upgrading the offensive weapons around Cam Newton. I enjoy what they’ve done this offseason and believe they will be competitive in the AFC East. With the Rashod Bateman selection, New England nets that true No. 1 receiver they’ve lacked for years.

Related | Rashod Bateman Dynasty Value: Where to draft him in 2021 rookie dynasty drafts?

Bateman is instantly the most talented receiver the Patriots have had since Randy Moss was dominating in Foxborough. Newton could be in for a massive season if this pick comes to reality.

Scoring more points than the opposition is the only method with a 100% success rate for winning football games. The simulator knows this, and it’s why it chose to give Kliff Kingsbury and Kyler Murray, arguably, the most dynamic player in the 2021 NFL Draft. Jaylen Waddle would excel playing with DeAndre Hopkins and Larry Fitzgerald.

Operating as the Z, dominating underneath, creating yards after the catch, and taking the top off the defense a few times a game, Waddle would be a perfect fit for the Arizona attack. With this selection, the Cardinals now have one of the most lethal offenses in the NFL. Arizona makes one of the scariest selections 2021 First Round NFL Mock Draft.