We are in the red zone now; we kick this cohort off with explosive energy — a “Nuk” to be exact.

Sure, “Hail Murray” is a cool play on words, but DeAndre Hopkins made that happen. The 6-foot-1 wide receiver plays like he’s 6-foot-5. He always has. It’s one of the reasons he’s remained productive despite playing through atrocious quarterback play for the beginning stages of his career.

What’s impressive about his athletic profile is none of it makes sense for one of the NFL Top 100 Players heading into 2021. We all saw his tape coming out and knew he was a stud, but there aren’t many receivers out there running near a 4.6 flat dominating the league. The Cardinals aren’t using him downfield as the Texans did, but that gave us a great gift.

Hopkins has proved his elite ability by changing his game. He’s slashed his broken tackles per touch in thirds since 2018, going from 23 receptions per broken tackle down to 7.7. He added a full yard to his per-catch output despite catching the ball at just 0.1 yards deeper than 2019. Furthermore, he’s adapted to Kingsbury’s offense. Oh, and my apologies for not bringing this up sooner; Hopkins has the most consistent hands in the league.

Speaking of adapting and overcoming change — DeForest Buckner, everybody! Buckner is everything I look for in a gap-penetrating 3-technique. He’s explosive enough to threaten the shoulder of interior blockers. His levers allow him to control a blocker’s breastplates as they flail to regain control. And, despite his 6-foot-7 frame, he plays with excellent leverage.

Defensive coordinator Matt Eberflus knows how to put players in a position to succeed. The Colts’ organization has done a wonderful job of that since Frank Reich and Chris Ballard arrived.

Buckner can string multiple pass-rush moves together to get to the quarterback. First, he’ll rip across a blocker’s face with a cross chop and rip-through, and when the blocker counters that and regains position, Buckner will pull that front shoulder through and use his wings to seal the edge with a spin. But he’s one of the NFL Top 100 Players overall going into 2021 because he’s an undervalued run defender as well.

This list voted on by the staff at the Pro Football Network has Kittle at No. 18 in the NFL Top 100 Players heading into 2021. That is 12 spots lower than Travis Kelce. I can promise you that’s not because Kelce is far and away the better player. No, this argument is easy. Neither is the better player because they’re different players. It all comes down to the offensive scheme.

If your team, say the San Francisco 49ers, wants to have an in-line tight end to use as a blocker and as a mismatch weapon on play-action — that is Kittle. The freak athlete is a devastating blocker and a dangerous post-catch runner. Hopefully, a fully healthy season in 2021 with competent quarterback play gets Kittle back into that 1,200-plus-yard range.

And once Trey Lance comes into the fold, watch out for Kittle as more of a downfield threat, too.

There might be more talented or more technical receivers in the National Football League. But if you give a defensive coordinator truth serum (or Johnny Walker Blue Label), they’d probably tell you their nightmares are most frequently about Tyreek Hill. He’s the most dangerous player in football.

Hill is not DeSean Jackson. He’s not simply someone you say, “run fast by the cornerback.” No, Hill is a legitimate receiving threat at all three levels of the field. I’d honestly add in a fourth, behind the line of scrimmage. His compact frame allows for efficient feet, yet he still produces outrageous explosion in a straight line.

Despite garnering a high aDOT (average depth of target), Hill remains a relatively efficient weapon. He’s never posted lower than a 63% catch rate, and unlike many “deep threats” or smaller-statured receivers we stereotype as having poor hands, Hill does not drop many passes. That is why he is so high on PFN’s NFL Top 100 Players heading into 2021.

This young cornerback is the stickiest cover corner in the NFL. He’s a gnat — the best way to describe him would be “pesky.” Yet, we knew in college Alexander would be successful in the league. He had that quintessential cornerback confidence. He trolled opposing offensive players while simultaneously shutting them down.

Fast forward to now, and Alexander is one of the top players on our NFL Top 100 heading into the 2021 season. If Alexander were 6-foot-1 and 210 pounds with the ability to play the run like someone further down the list, he’d be within earshot of the best player in the entire league. That is how special he is in coverage.

There’s just a tad more to the game than that. But he does the most important thing at his position quite possibly better than anybody. 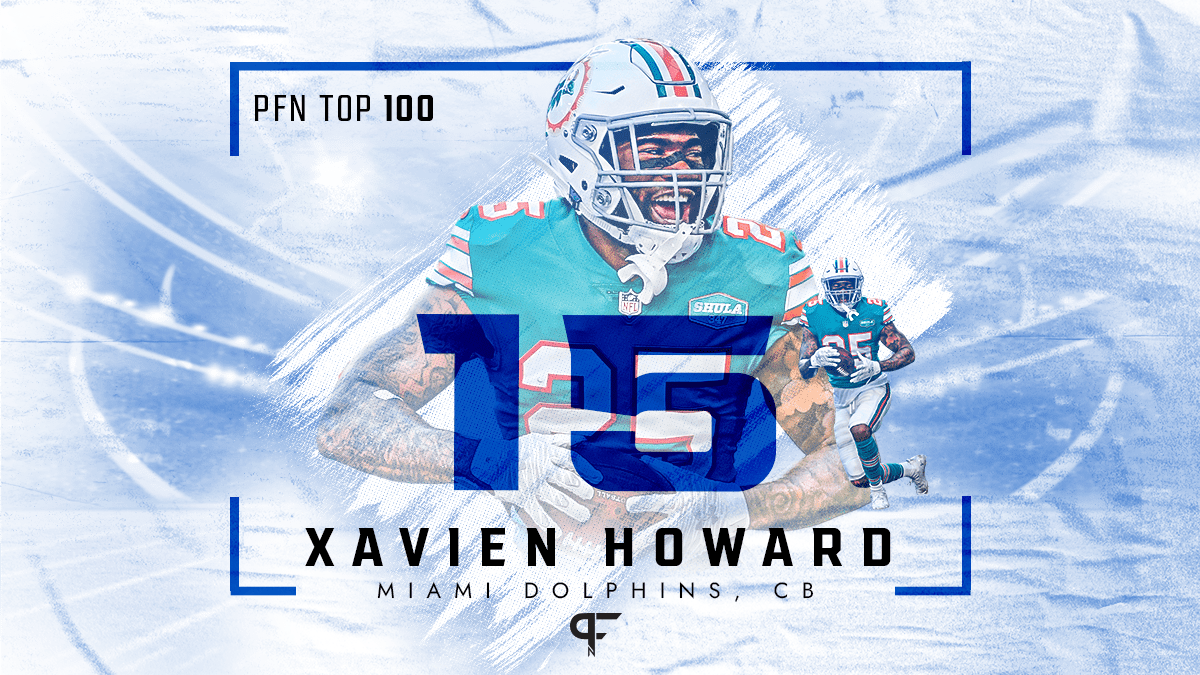 Xavien Howard is in the conversation for being the premier ball hawk in the NFL. We can’t say it’s definitive because Marcus Peters exists, but he’s a bit more consistent in coverage (and other things) than Peters. Howard flourished in his first season playing alongside Byron Jones. Actually, he outplayed the big-name free-agent signing in 2020.

Howard probably should have been the DPOY last season, but that’s an argument for the past. What was special about Howard in 2020 was his ability to cause incompletions when targeted more consistently. However, his aggressiveness still plays to his own detriment at times — in the form of big plays made against him. Still, receivers only caught 51.5% of their targets against Howard last, which mimicked his 2018 season.

Now, we wait to see if the rumored unhappiness with Howard’s current contract sours the relationship with the team or if they work something out moving forward.

Derrick Henry is not totally of this world. Incredibly, he plays the position creating the most wear in the league, receives a ridiculous workload, and somehow gets better as the season progresses. It’s as if he’s built from adamantium. Henry is a freight train, and as Josh Norman found out in hilarious fashion, trains don’t stop when they hit you.

He’s the final holdout of the old guard. He’s the only back left that really just runs the ball and still matters. We can sit here and arrogantly believe we can quantify Henry’s value, but there are intricacies of this game that are unquantifiable. That’s the area in which Henry operates.

Quenton Nelson was the cleanest draft prospect I’ve evaluated. The only way this young man wasn’t a future All-Pro was through catastrophic injury. Nelson quickly ascended into one of the best blockers in the NFL. He ranks high on our Top 100 Players heading into the 2021 NFL season, and he’s only just begun.

A player with such ferocity can rarely play so technically sound. He snatches the souls of defenders but does so with relative grace. The big, powerful interior lineman possesses stellar feet that allow him to get out into space and terrorize second and third-level defenders. Because of his age, there’s a chance Nelson sneaks his way into the top five at some point in his presumably illustrious career.

Because Bosa has an injury history that’s quickly resembling a CVS receipt, we don’t get to see one of the best young players in the NFL often enough. But, because of his unbelievable technical ability, he lands high on the NFL Top 100 Players heading into the 2021 season; Bosa ranked second on the list of edge defenders heading into 2021.

He ranked high in the positional rankings because that was not a democratic process. That was me being dictatorial. Bosa’s all-around game and the quality of his production make him special. He’s not just an elite pass rusher. And he’s not just penetrating and hoping to cause a ruckus in the backfield.

Bosa’s methodical, strong, and technical on the edge. Bosa is an elite run defender. That all-around skill set is what makes him one of the best in the league, but because he plays with less flash, he’s still somehow underrated.

There’s an argument to be made that only one or two players should rank better than Ramsey on this NFL Top 100 Players list heading into 2021. What Ramsey does as a cornerback transcends the position. He’s the Jamal Adams of cornerbacks in that he could probably play in the box, blitz the quarterback, and be an elite strong safety.

Oh, and he can still delete an entire side of the field in coverage. Listen, playing cornerback in the modern era is hard. Heck, it’s nearly impossible, especially for a physical player like Ramsey. Back in the day, Ramsey would have been in contention as the best player in the league and one of the best this generation.