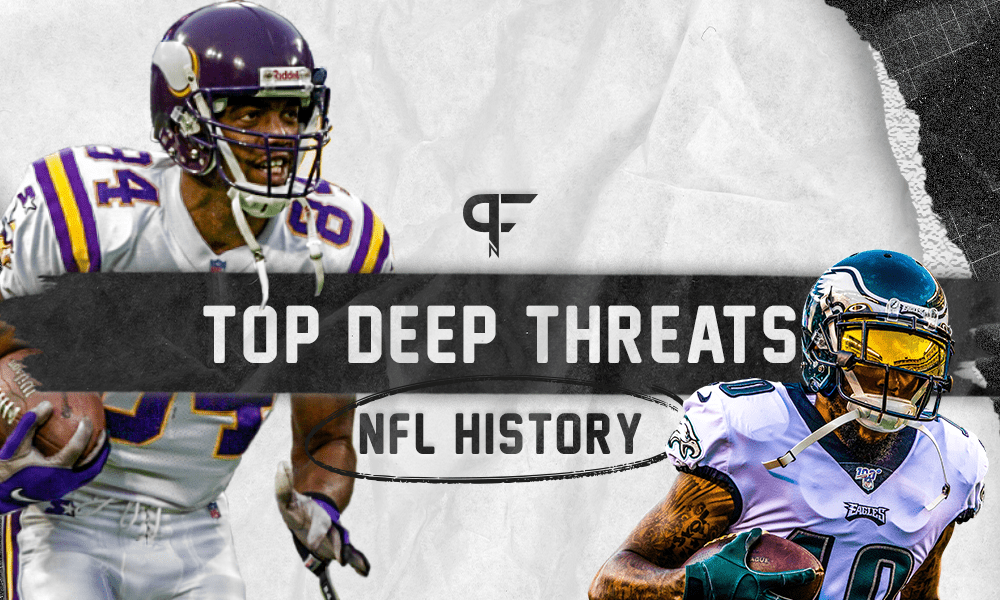 Social media was set ablaze recently when a graphic of Tyreek Hill claimed he might be the best deep threat in NFL history. The backlash didn’t take long, but it seemed like wasted energy. Who are the most dangerous deep threats of all time, and could Hill, in due time, crack that list or even top it?

Let’s start at the apex and work our way down.

This one shouldn’t even be disputable. Moss is one of, if not the, greatest receivers of all time. And despite that, many criticized him as only being able to run vertically. His 45 touchdowns of 40 or more yards rank second in NFL history.

His last name was turned into a verb describing the equivalent of getting dunked on in football. “You got Mossed” cements his legacy as the most dangerous deep threat of all time. This wasn’t like the ’60s or ’70s, where we didn’t have clean film to comb through. No, we have all the visual evidence we need.

Lofton is also one of the top deep threats in NFL history. In his 16-year NFL career, he averaged 18.3 yards per reception on 764 receptions. He wasn’t just a deep threat, as he ranks 12th all-time in receiving yards. He also scored 27 touchdowns of 40 yards or more, with an average of 58.2 yards on such plays. Lofton also scored a 61-yard touchdown in Super Bowl XXV while playing with the Buffalo Bills — he was 34 years old at the time.

“Bullet” Bob Hayes averaged exactly 20 yards per reception over his 11-year career. He ranks fifth all-time in touchdowns over 40 yards, notching 33 in his career. He also had years where he averaged 26.1 and 24 yards per reception. His career was shorter-lived than some others, but his reputation as one of the greatest deep threats of all time persists today.

Jackson is THE modern name to grace this list. Jackson is the player other teams have consistently tried to find since his immediate success in Philadelphia. His 32 touchdowns of 40 or more yards rank sixth all-time. Yet, his 63.2 yard average on those touchdowns is the highest on the list of 29 (aside from Homer Jones’ 66.5-yard average).

Alworth’s production borders on unbelievable, considering he only played 11 seasons in the NFL. He generated six seasons of over 60 catches and only averaged under 19 yards per reception in one of those seasons. So, not only was Alworth a deep threat, he did it while putting up league-leading reception totals. He also ranks fourth all-time on 40-plus-yard touchdowns with 37.

Does Tyreek Hill crack the top 10 of most lethal deep threats?

Johnson is the biggest physical freak of all time. Nobody has played the position as Johnson did, and unless lab procreation can genetically enhance humans, there may never be someone like him again. When you’re 6-foot-5, 239 pounds, and run a 4.35 in the 40-yard dash, it’s almost impossible to be anything but a great deep threat. His 15.9 yards per reception is higher than Moss, but while it’s safe to say he’s one of the best NFL deep threats, he’s not in Moss’ league.

Owens doesn’t feel like the deep threat Johnson or Moss were, but he ranks third all-time on the list of 40-plus-yard touchdowns with 40. He earned a more prominent reputation for his work after the catch. Still, Owens was undeniably a touchdown machine. He was another physical specimen, averaging 16.7 yards per reception at 34 years old. He scored a 98-yard touchdown at 36 years old playing for the Buffalo Bills.

Warfield tallied seven straight seasons averaging 20-plus yards per reception, which alone makes him one of the best deep threats in NFL history. He’s also 18th all-time in touchdown receptions of more than 40 yards. His 20.1 yards per reception ranks at the top of the list for players with at least 300 receptions.

The numbers that Maynard put up during the mid-to-late 1960s are borderline unfathomable. In 1967, he caught 71 passes for 1,434 yards, which is over 20 yards per reception. The following year, Maynard rattled off 1,297 yards and averaged a league-best 22.8 yards per reception. He also ranks seventh in all-time touchdowns of 40 or more yards with 30. Despite his substantial reception totals, his consistently high average yards per reception makes him one of the best deep threats in NFL history.

Rice, unsurprisingly, is the best deep threat ever if we go off the metric of 40-plus-yard touchdowns. His 54 touchdowns in that category are 9 more than Randy Moss. However, Rice wasn’t necessarily known as a deep threat, and his longevity certainly helped boost his numbers. He’s widely regarded as the best receiver of all time. Maybe his overall game and the fact he played in a West Coast system during his time in San Francisco underrates his long game. Either way, Rice had no weakness.

Morgan ranks 10th all-time in scoring 40-plus-yard touchdowns. He started his NFL career averaging 20-plus yards per reception in six straight seasons. He also averaged 19.2 yards per reception over his 14-year career. In 2011, Bleacher Report named Morgan the fastest player in Patriots history. With all that considered, Morgan had to be on the list of best deep threats in NFL history.

The Cheetah makes his appearance (as the best current deep threat in the league).

Hill is an unbelievable talent. NFL Draft prospects have been unfairly compared to him every season since 2017 when he had his first 1,000-yard season. There might be “better” receivers at the NFL level currently, but it’s hard to argue against Hill for being the most terrifying to gameplan against. That’s why our own Matt Williamson had him ranked as the best receiver in the NFL heading into 2021. That speed paired with his abilities as a receiver will eventually land him on the all-time list. Yet, he has a lot of tread left on the tires of his career.

Hutson is on every NFL Anniversary Teams’ all-time list. His dominance during his time is unparalleled. He even led the league in interceptions during the 1940 season. His résumé doesn’t really make him one of the greatest deep threats in NFL history. He’s just an unbelievable story of dominance, and in 1939 he averaged 24.9 yards per reception.