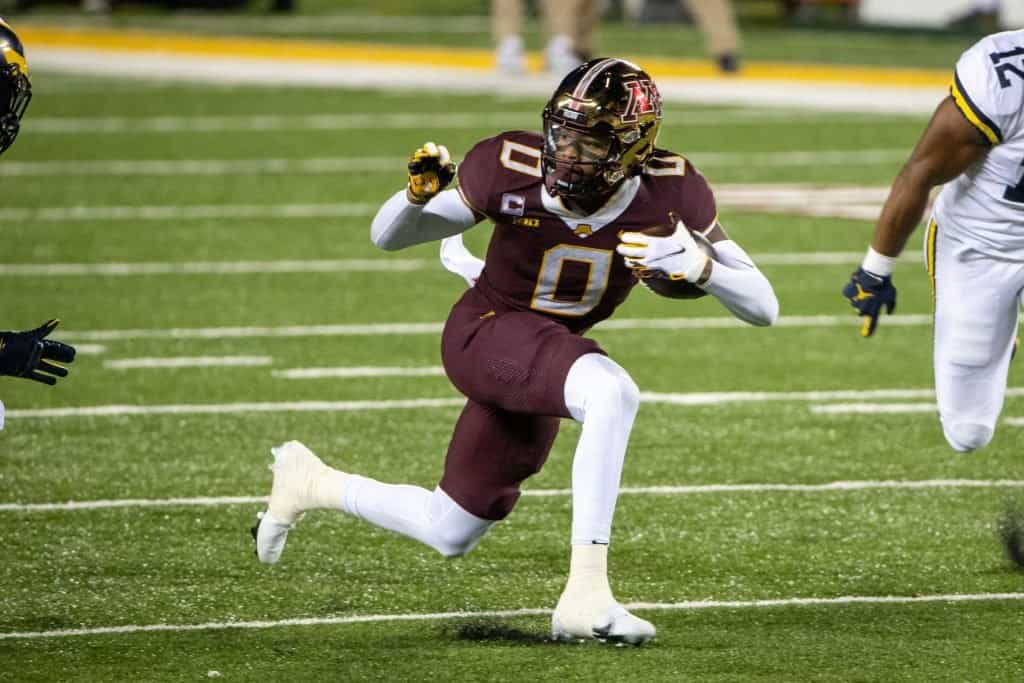 Assembling a mock draft this close to the actual 2021 NFL Draft is like designated driving through a hailstorm with three drunks in the back seat. The trick is to tune out all of the distractions and aim for the middle of the road.

This mock draft contains scouting notes, a sliver of inside information, plenty of educated guesses, a few wild guesses, and maybe a smidge of fanbase trolling. In other words, it’s a mock draft.

Without further ado (since no one has ever read the introduction to a mock draft anyway), let’s get to the picks!

You have probably even heard every rationalization explaining why Urban Meyer will be better than Chip Kelly, Nick Saban, and every other disastrous college-to-NFL coaching hire since Jimmy Johnson. So let’s just move on to the next pick instead of padding the word count.

Lawrence is a quarterback prospect capable of transcending his franchise’s history and carrying them back to contention. Zach Wilson is a prospect capable of aiding an organization that’s already helped itself get better. That’s an important distinction for the Jets, who have been damaging young quarterbacks since before the Jaguars (or Wilson) even existed.

In short, Wilson’s success is contingent on head coach Robert Saleh, offensive coordinator Mike LaFleur, general manager Joe Douglas, and the rest of the Jets organization, not the other way around.

Kyle Shanahan has the chance to do something unique with this pick. He could select Trey Lance or Justin Fields and groom them while Jimmy Garoppolo soaks up early-season starts. Shanahan could then unleash Lance or Fields in what we are required by internet law to call “his extremely QB-friendly scheme” and confirm he is a bona fide offensive genius once and for all.

Alas, the 49ers appear bent on drafting Mac Jones, who is far less talented than Lance or Fields but more “NFL ready,” which is code for “pocket passer propped up by a great program,” — which is often code for “tall white guy.” It’s almost certainly the wrong, but safe, move that Shanahan will make quasi-work by turning Jones into the arithmetic average of Kirk Cousins and Matt Ryan.

No matter what they do with the No. 4 overall pick, it will just make them more like the Atlanta Falcons.

Trey Lance reminds me a little bit of Ryan Tannehill, who thrived in Arthur Smith’s offense with the Tennessee Titans. Lance must make the climb from the FCS level to the NFL after a mostly-canceled (played one game) 2020 season. Tannehill had to make the climb from Adam Gase’s borderline gaslighting to reenter a functional society. It all fits together.

There was a rumor circulating in March that Joe Burrow was actively lobbying for Ja’Marr Chase, who was his favorite target during LSU’s 2019 National Championship run. That rumor turned out to be untrue. Burrow simply suggested that Chase would be a fine fit. The Bengals front office, stirred from their offseason fugue state by someone expressing a strong football opinion (not a common occurrence at Bengals HQ in early spring), nearly fell out of their rocking chairs with alarm.

Someone then scribbled Chase’s name with an orange dry erase marker onto an empty whiteboard and declared it to be the team’s “draft board.” Also, they wrote “Jamar Chase.” Close enough.

There was a Twitter debate a few weeks ago about whether Chase or Penei Sewell makes more sense with this pick. The correct answer to that debate is nothing matters until the Bengals start acting more like an NFL organization than an antique shop operating out of a farmhouse on a dirt road.

If you are asking yourself, “Why would the Dolphins draft Pitts when they already have Mike Gesicki?” —  please take a deep breath, eat something healthy, perhaps walk around a nearby pond, and start thinking about the NFL Draft again when you’ve reset your perspective.

Kyle Pitts could be the next Shannon Sharpe. If Dolphins fans need more ammunition to support this selection, Pitts and Gesicki would be a much better tight end tandem than Hunter Henry and Jonnu Smith. Take that, Patriots fans!

The Lions will draft a true alpha because new head coach Dan Campbell considers himself a true alpha and uses terms like “true alpha” unironically. Who could possibly be more of a “true alpha” than a Heisman Trophy winner who led the NCAA in receiving while weighing as much as the typical 14-year-old?

Taysom Hill’s magic love potion wears off, and Sean Payton awakes as if from a terrible dream. Drew Brees is gone! The Saints are deep in a cap quagmire! They’re keeping an aging roster intact because they can’t afford to release many of their veterans and start rebuilding! He’s spent two years pumping up a glorified tight end instead of grooming/rehabilitating Teddy Bridgewater or Jameis Winston!

Seeing Fields slide and knowing that the Panthers are set at quarterback with Bridgewater and new arrival Sam Darnold, Payton bundles his 2021 and 2022 first-rounders, some change, and ships them to the Panthers.

Payton’s knick-of-time decision turns out to be the right move. Justin Fields develops rapidly behind a veteran line while throwing to Michael Thomas and Alvin Kamara. He makes throws Brees could no longer make while starting his career operating within a structure that was childproofed for Hill. The Saints are short on draft picks, but it’s a lot easier to work around the loss of a first-round pick than the absence of a franchise quarterback.

Meanwhile, Ryan Pace strokes his chin in the Chicago Bears’ headquarters and wonders, “Maybe I should have made an offer? Nah, we’re good with Andy Dalton.”

If John Elway were still running the Broncos like an emperor-demigod, he would select a cornerback like Jaycee Horn or Patrick Surtain II. That’s because Elway has always thought that the Broncos are one impact defender away from a deep playoff run, even when their offense consisted of Trevor Siemian throwing to Bennie Fowler.

If new general manager George Paton had complete control of the Broncos, he would likely position the team to draft one of the top quarterbacks. That’s because Paton is a sensible executive who realizes that Drew Lock is much more likely to take the Darnold swan dive in his third season than any Josh Allen leap.

Working in tandem, Elway and Paton will select Penei Sewell, the best player available, so Vic Fangio can insert him at right tackle on an offensive line that already features Garett Bolles and Dalton Risner. If Drew Lock takes even a small step forward behind that stalwart line, the Broncos may finally field an above-average offense, just in time for their defense to erode and crumble.

Jerry Jones stays pat and selects the first defensive player of the draft. Jaycee Horn is a brash, big-bodied, big-name cornerback who perfectly fits the Cowboys’ mentality and scheme. Jones then struts and crows about what a brilliant decision he made by not really making a decision. Although their roster is stacked with impressive talent, the Cowboys go on to somehow finish third in the worst division in the galaxy.

You may not be aware of this because it’s rarely talked about in the media, and it’s never used as a lazy characterization or a cheap joke, but general manager Dave Gettleman has an affinity for so-called “Hog Mollies,” also known as large offensive and defensive linemen.

Rashawn Slater fits that mold. Additionally, anyone who watched Slater block Chase Young in 2019 and then watched the Giants’ offensive line block nobody in 2020 knows that this would be a very solid selection.

You may be looking at this pick and wondering, “does the writer of this mock draft really think Howie Roseman is that incompetent, or did he stack this draft board specifically to troll Eagles fans?” Frankly, I don’t know anymore, either.

Christian Darrisaw provides insurance if Andre Dillard, the left tackle the Eagles drafted 22nd overall in 2019, turns into vaporware. He helps Roseman resist the urge to re-sign Jason Peters for his 94th NFL season for a contract that would string the Eagles’ cap woes out until 2029. Darrisaw is a better prospect at his position than Jaylen Waddle and Micah Parsons are at their positions, no matter how much the Philly Faithful may prefer those two.

Plus, Roseman likes “Hog Mollies” almost as much as Dave Gettleman does. He just doesn’t have a corny name for them. Furthermore, the Giants aren’t the only team that will spend the next decade trying to figure out how to block Chase Young.

The Chargers’ cornerback depth chart currently consists of Chris Harris Jr. (very good, but old and mostly a slot guy), Tevaughn Campbell, Michael Davis, Brandon Facyson, John Brannon, and some other guys they must have found wandering around Mission Beach before they left San Diego. Patrick Surtain II is an obvious, high-upside upgrade at a position of need.

I am not as high on Kwity Paye as I am on other edge rushers in this draft class like Georgia’s Azeez Ojulari, Texas’ Joseph Ossai, or Pitt’s Patrick Jones. However, Paye is undeniably toolsy, and the Vikings tend to make safe, down-the-middle draft decisions.

Everyone’s finished pretending that the Patriots crushed it in free agency, right? We’re through acting as though overspending for mid-tier talent suddenly makes sense because Bill Belichick is the one doing it? All of our “Jonnu Smith and Hunter Henry mark the return of the 2011 Patriots (minus Tom Brady)” free-agency articles are published? Good.

Now for a reality check. The Patriots’ wide receiver corps consists of Nelson Agholor, Kendrick Bourne, Jakobi Meyers, N’Keal Harry, and Gunner Olszewski. That’s two No. 3 receivers, two No. 4s, and one Julian Edelman cosplayer. The Patriots need a vertical threat unless they plan to run a two-tight end flexbone offense with Cam Newton (now THAT would have been a good post-free-agency article).

Jaylen Waddle has the tools to be a go-to receiver in the NFL, even though he never was at Alabama. He would instantly become the best receiver on the Patriots’ roster, as well as the best receiver the Belichick Patriots ever drafted on Day 1.

Yes, all of that was faint praise. That’s the only praise the Patriots have deserved for the last 12 months or so.

The Cardinals need a pure free safety so Budda Baker can play a more natural strong safety/hybrid role. They also need a jolt of youth and athleticism in their secondary. With James Conner bolstering their RB depth chart, they are no longer likely to break the seal on drafting a running back. As such, they select one of the best safety prospects in TCU’s Trevon Moehrig.