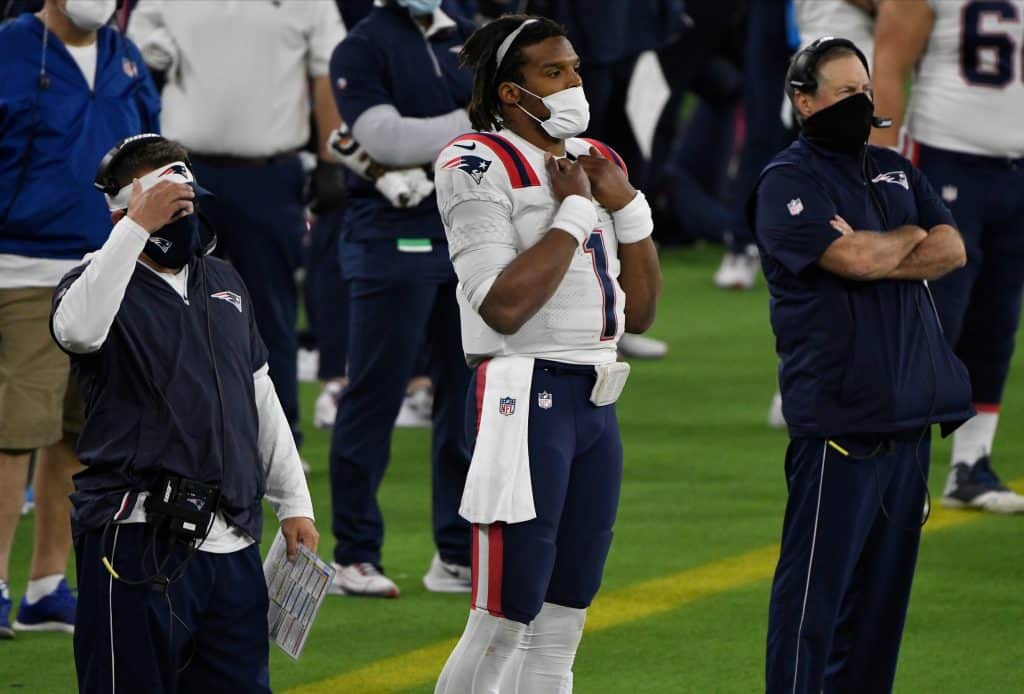 The New England Patriots are a totally different team after their free agent signings on Monday and Tuesday to jumpstart the NFL offseason. They’re also a significantly better team. But they are not Super Bowl contenders. And that’s a problem because the Patriots should know that making headlines in March is easy, but buying a contender is essentially impossible.

The Patriots haul of Hunter Henry, Jonnu Smith, Nelson Agholor, Kendrick Bourne, Matt Judon, Jalen Mills, and Davon Godchaux brings lots of quantity and a fair share of quality. But it also smacks of flopsweat, and perhaps a little Tom Brady envy, after last year’s 7-9 stumble. And Bill Belichick’s sudden eagerness to sign many mid-tier starters and role players at peak market value is a troubling sign that The Patriot Way has lost its way.

We’ve come to bury the New England Patriots, not the individuals they signed, who are all serviceable-to-very-good football players. The issue is that there are so many of them. They are so rich of compensation, and none of them bears even a passing resemblance to Randy Moss or Darrelle Revis.

Henry is a productive, though oft-injured possession target coming off one of his best NFL seasons with 60 catches, 613 yards, and 4 touchdowns for the Los Angeles Chargers in 2019. He was the top tight end on the free agent market this year, which is significantly different from truly being a top tight end.

When you thought of the Tennessee Titans’ offense over the last two years, you thought of Derrick Henry and Ryan Tannehill. Then A.J. Brown. And then probably Corey Davis (who signed with the Jets on Monday).

However, after all of them, you definitely thought about Smith, who caught a career-high 41 passes last year. Or maybe Adam Humphries or the offensive line. But Smith was somewhere in the mix of the top seven or eight guys you thought of.

So is Smith officially an “afterthought?” Nah, that wouldn’t be totally accurate. He’s a sturdy blocker and a steady YAC producer. In addition, he’s a red zone target, making him a useful starter.

Agholor played for the Las Vegas Raiders for the veteran minimum in 2020 after he was run out of Philadelphia for dropping passes in critical situations. Agholor caught 48 passes for a career-high 896 yards, including a memorable 85-yard fourth quarter catch-and-run against the Miami Dolphins when the Raiders were fighting for their playoff lives.

Did Agholor reinvent himself as Lynn Swann after five seasons as an inconsistent slot guy for the Eagles? Or was 2020 a mirage caused by a few blown coverages and fluke plays? Evidently this offseason, the New England Patriots are suddenly the team that wants to pay a premium to find out.

Bourne is one of the NFL’s best blocking wide receivers, which is slightly more useful than being one of baseball’s best-hitting pitchers or hockey’s best shooting goalies.

OK, that’s being a little too snarky. Bourne is another useful role player coming off a career year with 49 receptions for 667 yards as the San Francisco 49ers’ second-to-fifth option in the passing game, depending upon who was healthy. Spot a trend?

In the business world, what the New England Patriots did on Monday by signing Bourne is called “buying high.” As investment strategies go, it’s a tried-and-true method for wasting money.

Mills is a versatile, high-effort, undersized box safety and slot cornerback. He’s precisely the kind of role player good teams draft and develop. He’s also the type that bad teams sign as free agents because they have so many roster holes to fill.

Godchaux is a 30-snap per game run plugger coming off a bicep injury. There are lots of folks who never mentioned Godchaux’s name before and probably thought he was a former Grateful Dead keyboard player singing Hosanna to add to his value as a scheme fit on Monday. Beware of any player whose career highlight is the day his contract is announced.

We saved the best for last. Judon was a two-time Pro Bowler for the Baltimore Ravens. He’s also Trey Flowers, Kyle Van Noy, and lots of other former Patriots defenders in reverse.

Remember when the Patriots used to draft players like Flowers (or grab discarded prospects like Van Noy), develop them into perfect cogs in their defensive machine, then watch as other teams signed them away as premium-priced free agents? Well, now the Patriots are paying the premium for someone else’s homegrown talent.

Judon upgrades the Patriots’ defense. The problem is that they suddenly needed to break the bank on someone like Judon instead of promoting from within or trash-picking other team’s benches for treasure the way they used to.

The Patriots’ signings: substance and smoke

Judon and the other signings will make the 2021 New England Patriots better than last year’s team. That’s because last year’s team stunk like a lobster roll left out in the sun.

Sure, they went 7-9. They also lost to the Bills 38-9, the Rams 24-3, and the 49ers 33-6. They were an awful team getting by on arch-conservative game plans that kept games close and a schedule full of soft patches.

Their reputation also helped. They beat the Miami Dolphins in the 2020 opener and the scared-to-screw-up Arizona Cardinals in Week 12 in part by just being THE MIGHTY PATRIOTS.

Are the new-and-improved Patriots better than the AFC rival Buffalo Bills? Nope, and it’s not close. The Bills were quietly keeping their offensive line intact while the Patriots were throwing money at No. 3 wide receivers and two-down tackles.

Have they closed the gap on the Kansas City Chiefs or other AFC contenders? Get serious. The Chiefs even signed center/guard Joe Thuney, one of the players the Patriots let slip away so they could overpay guys who were memes two years ago.

The New England Patriots didn’t start their offseason by building a contender on Monday. They built, at best, a plucky Wild Card team. What did it cost them? (Cue the Thanos music). Everything.

Well, not everything. Just tons of cap space that could have been used on one or two true marquee signings then saved for after they have rebuilt and found a solution at quarterback.

Now, what’s the ceiling on that offense? Will it be as good as the Browns’ two tight end offense? The Titans’ run-oriented scheme? Folks making comparisons to the great Patriots’ two-tight end attack circa 2011 may have forgotten that they had a different quarterback in those days.

Of course, the Patriots’ offense could be one of the best in the league if Newton returns to 2015 form. The 2015 season was two presidents ago, folks.

The mostly-healthy Newton of 2017-2018, who threw for 3,000-3,500 yards and 20-25 touchdowns while running like a 1970s fullback, is probably as good as it’s ever gonna get, especially with a supporting cast built for blocking and ball control. That’s a fine quarterback and a fun one. But he won’t be good enough to push the Patriots past the Bills or beat the Chiefs.

Strip the Patriots label off the can, and this week’s spending spree would be perceived differently. If the Carolina Panthers made these moves, we might shrug. If the New York Jets were trying to reboot Classic Cam by going heavy-jumbo at tight end, we might laugh.

Belichick gets a pass because he’s Belichick, but he is now doing some non-Belichickian things. The team’s reliance on top-dollar veterans could backfire in ways the Patriots haven’t had to cope with for a generation.

The Patriots are likely to seek a successor to Newton in the draft. They also need a true No. 1 wide receiver to go with the (let’s be charitable) No. 2 and 3 receivers they just signed. They still need young reinforcements all over the defense. It’s a long draft wishlist, but at least all of the new acquisitions mean that the Patriots won’t be forced to thrust a bunch of rookies into the starting lineup, right?

That’s actually the worst thing about all of these offseason free agent signings for the New England Patriots. Mid-tier veterans like Mills, Godchaux, Bourne, and Agholor tend to choke out the young players who end up below them on the depth chart.

The arrivals of Henry and Smith, for example, mean that last year’s rookie tight ends Dalton Keene and Devin Asiasi are effectively out of the team’s plans. Neither Keene nor Asiasi drew many Gronk comparisons last year, but it’s always troubling when a team suddenly pulls the plug on a plan that cost them a pair of third-round picks.

A move away from The Patriot Way

In the past, Belichick had no problem letting young players win starting jobs away from veteran acquisitions. But veteran acquisitions of the past came with rock-bottom price tags. If Agholor performs no better than Gunner Olszewski in camp, guess who is still going to get the snaps and touches?

Teams that splurge in free agency don’t just regret it because the veterans they sign don’t pan out and end up spending too much money. They also discover that the bench behind those players is bare two years later because the big-money acquisition ate up all the coaching attention and starter’s reps, and the team didn’t invest high picks at his position.

The Patriots so successfully circumvented all of these problems for 20 years that it had its own name: The Patriot Way.

Now, they are overpaying and counting on the types of players that they normally would either grab for cheap or avoid as a matter of principle. In a way, they’ve become what the Dolphins, Bills, and (shudder) Jets used to be. A team that thinks it can spend its way to success.

The Patriots’ spending spree is being reported as a triumph. It’s more likely to be the death knell for a dynasty.