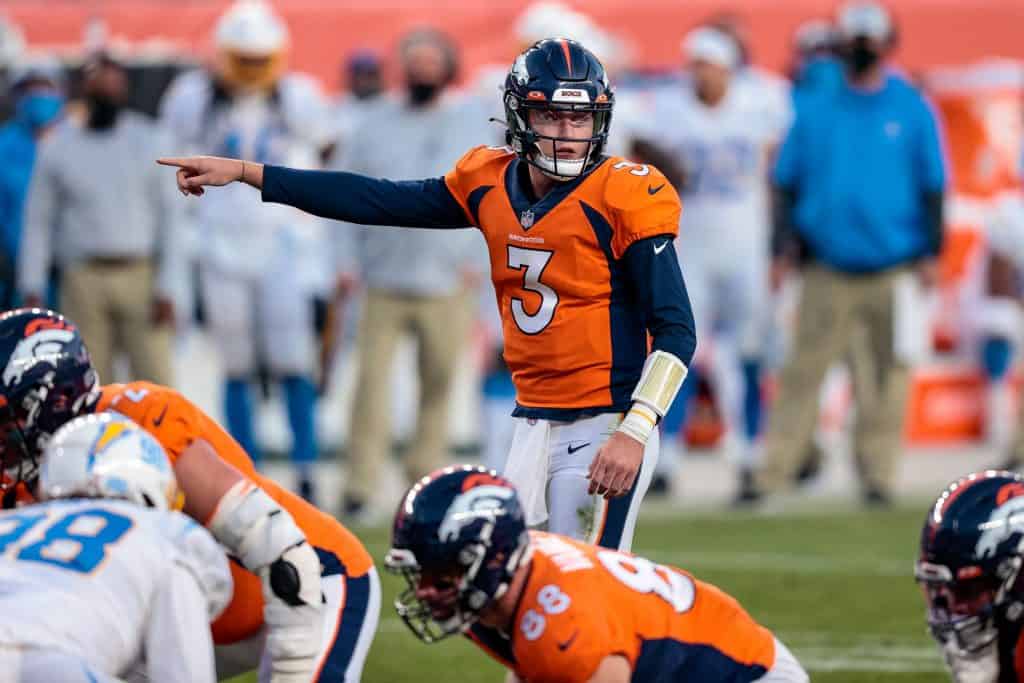 The Denver Broncos are in an interesting spot in the upcoming NFL Draft. Incumbent starting quarterback Drew Lock underperformed in 2020, and many suspect that the Broncos are looking for a replacement.

However, all five of the draft’s top quarterbacks may be taken before the Broncos’ selection at ninth overall. Did Lock play poorly enough for it to be worth the cost of trading up to draft his successor?

Drew Lock’s statistics during his sophomore season were underwhelming

That yardage total is uninspiring, and his 15 interceptions were tied for the most in the league. Those are not the numbers you want to see from a player you hope can be a franchise quarterback going forward.

Of course, there is more to a player’s performance than just their box score. That’s why the (Bx) Movement created the Offensive Value Metric (OVM). It measures how much impact a player has on their offense.

Last season, Lock earned a grade of 20.59, the tenth-lowest among all qualifying quarterbacks. A grade that low indicates that not only did Lock underwhelm statistically, he also inefficiently gained those statistics.

Looking at the advanced metrics involved in calculating Lock’s OVM, he actually performed relatively well on several of them.

The Broncos QB threw the ball an average of 9.1 yards downfield across all of his pass attempts and 6.1 yards on his completions. Lock also threw into tight windows on 19.6% of his passes. All three of those statistics ranked very highly last season. Those stats combined indicate Lock generally attempted exceedingly difficult passes last season.

Unfortunately, Lock struggled to actually complete those passes. He had the third-lowest completion percentage among all qualifying quarterbacks in 2020 (57.3%).

To a certain extent, that is to be expected given the types of passes he was throwing. However, according to the NFL’s advanced metrics, his percentage was 3.9% lower than it should have been, the third-worst differential. As such, Lock underperformed even relative to his situation.

Lock’s OVM difficulties weren’t confined to season-long averages. In the charts below, you can see his grades from each week of last season, marked by the black dots. For comparison, the yellow line shows the league average OVM grade for all qualifying quarterbacks in 2020. 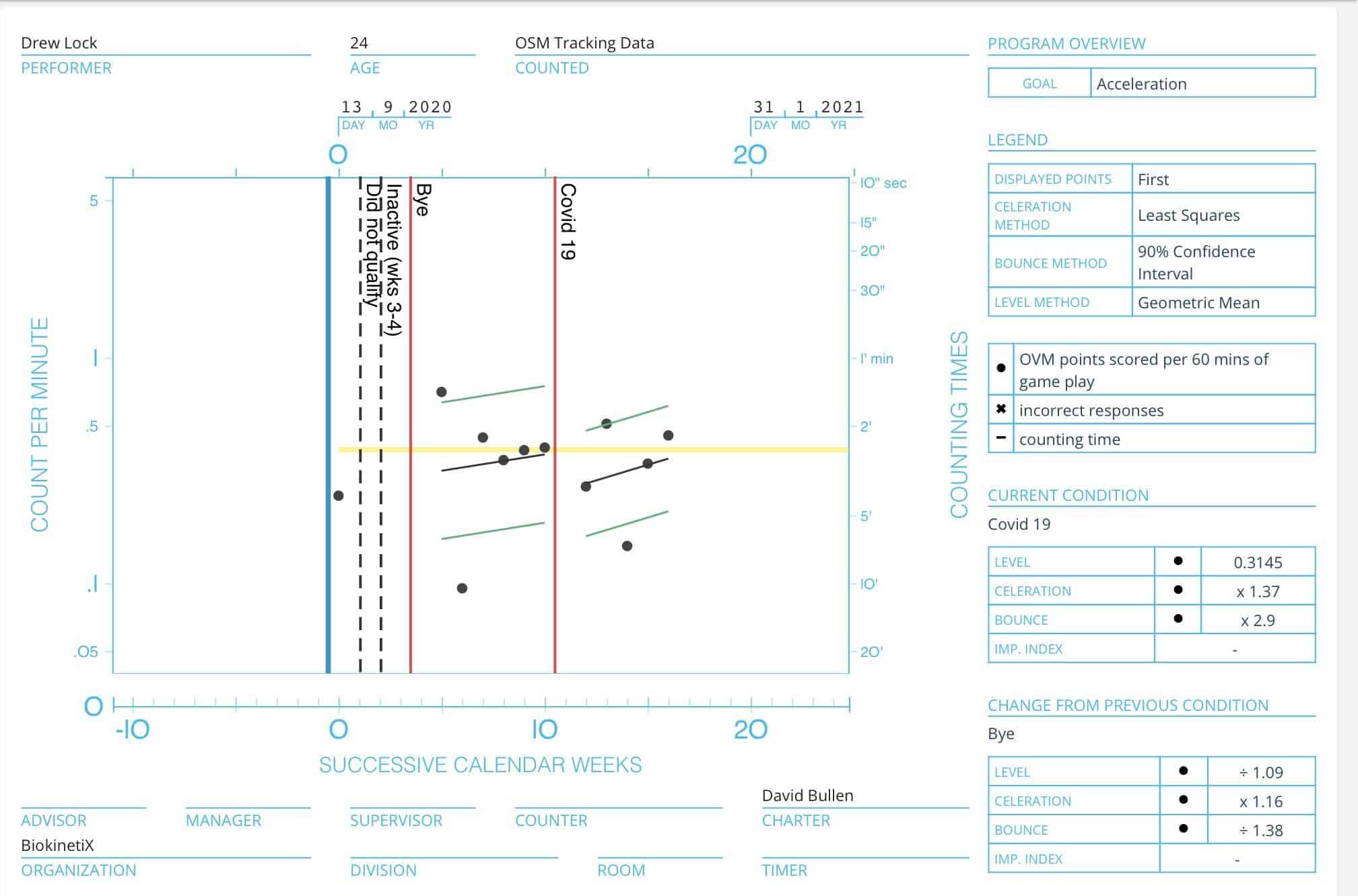 As you can likely tell, Lock was wildly inconsistent in 2020. His grades ranged from a high of 42.32 (well above the league average) down to a low of 5.7.

This problem has dogged Lock since his college days at Missouri. On one play, he’ll look like a future Hall of Famer. On the next, he’ll make me look like an elite quarterback in comparison. For him to still be showing that level of variance two seasons into his NFL career does not bode well for his future.

It’s fair to say that Lock struggled statistically in 2020. However, it is essential to point out that most of his receiving corps also underwhelmed. In the chart below, you can see how the Broncos’ top four wide receivers, along with tight end Noah Fant, performed throughout the season.

With the exception of Fant, who had the sixth-most receiving yards of any tight end last season, none of those statistics are particularly awe-inspiring. Of course, Lock needs to take some of the blame for those low numbers. As such, let’s look at another chart — same players, but this time comparing how they played according to the OVM.

For context, there were 98 wide receivers and 34 tight ends that qualified for grades last season. As you can see, while Fant once again performed quite well, none of the wide receivers ranked above the halfway point at their position.

To be fair, directly comparing the OVM grades of players on different teams and varying sample sizes isn’t an exact science. However, it does give you some sense of how ineffective Denver’s wide receivers were last season.

It’s tough for Lock to play quarterback at a high level when none of his skill position players contributed.

The advanced metrics behind the Broncos’ OVM grades

There are many factors involved in calculating the OVM grades of wide receivers, but there is one obvious culprit behind all of Denver’s OVM struggles — their inability to catch passes. Let’s take a look at one last chart.

Those are abysmal numbers across the board. Jeudy was the worst offender, producing the second-lowest catch percentage in the NFL among all wide receivers and tight ends and one of just two to catch less than 50% of his passes.

Patrick’s catch percentage was the only one among the group that was even vaguely acceptable, and even his was average at best.

Indeed, Lock isn’t the most accurate quarterback, but that’s no excuse for the simply abysmal catch percentages produced by many of his targets.

The Broncos’ running game had a less direct effect on their passing game, but it is worth mentioning that the team also struggled in this regard.

On the surface, Melvin Gordon and Phillip Lindsay’s box score statistics seem reasonable enough, combining for 1,488 yards and 10 touchdowns. However, the advanced metrics are far less kind to them. Gordon and Lindsay earned grades of 7.14 and 5.99 — both ranked in the bottom half compared to other players at the position.

Based on those statistics, we can say that, like most of their teammates, Denver’s running backs contributed little to the offense.

The Broncos’ draft plan is going to be fascinating to watch

It is going to be interesting to see what the Broncos decide to do on draft day. The statistics show that Lock didn’t reveal himself to be a franchise quarterback in 2020. That said, how much can you really blame Lock for struggling in an offense that had one skill-position player who was contributing at even an above-average level?

Whether they decide to move up in the draft essentially depends on how much they think Lock was actually to blame for his team’s offensive failings. If he held the team back, resulting in poor performances almost across the board, moving up to draft his replacement makes sense.

But if Denver believes that Lock can still play at a higher level with better talent around him, the team might decide to give him another season.