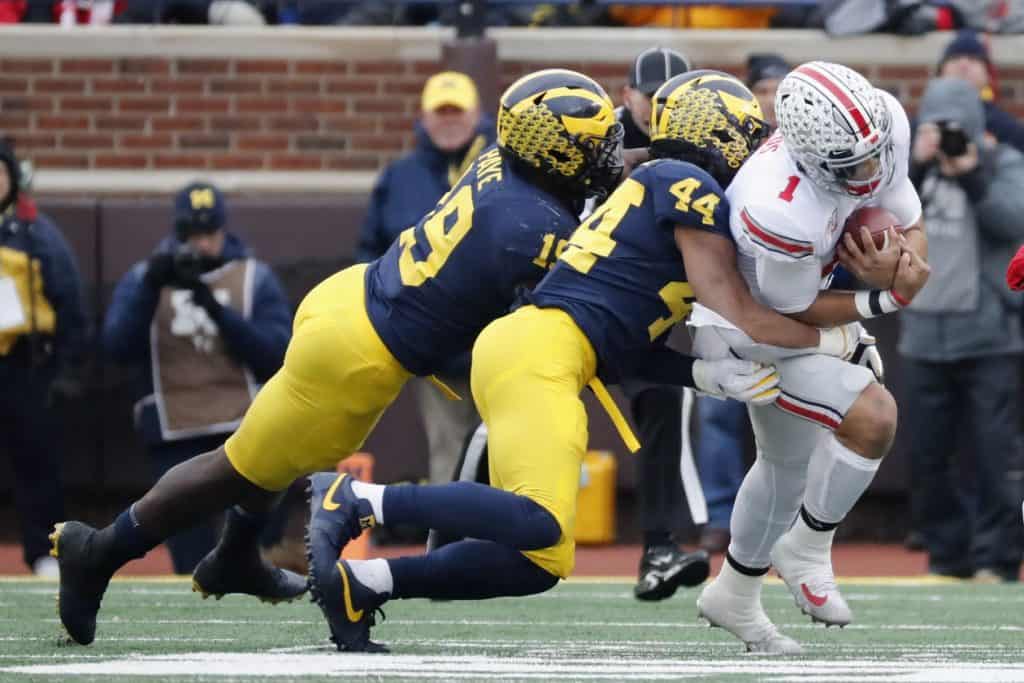 I have no idea where the time went, but we are less than two weeks from the 2021 NFL Draft kicking off in Cleveland. As teams make the final tweaks to their big board, we put Pro Football Network’s Mock Draft Simulator to the test. Let’s see how the first round of the annual event could play out for all 32 selections in this 2021 NFL Mock Draft.

The Jaguars will not screw this up, and all 31 other teams already have Trevor Lawrence crossed off their boards. Jacksonville acquires their QB of the future, and Urban Meyer receives the player he believes can lead them to the promised land.

Following Sam Darnold’s trade to the Carolina Panthers, the New York Jets are locked in for a QB at No. 2 overall. All signs point to Robert Saleh and Joe Douglas being infatuated with Zach Wilson. He put on a show at BYU’s Pro Day and forced all other QBs to tweak their playsheet in the process. Despite only having one year of stellar tape to evaluate, albeit one of the best in the draft class, Wilson can drive the football and make throws off-platform with ease.

You do not make a franchise-altering trade with the plan of “taking who falls.” No, you have a player in mind when you bet the farm. John Lynch and Kyle Shanahan have gone all-in and select the QB whom they have been not-so-secretly grooming for several years in Justin Fields.

There is no throw Fields can’t make, and he could easily end up being the best signal-caller of this draft class. In keeping Jimmy Garoppolo on the roster, Fields can wait in the wings while learning the system. San Francisco remains competitive for 2021 and has its QB of the future — win-win.

I believe this is where the draft truly begins. The Falcons are more than one player away and may charge a king’s ramson for this pick. The Pro Football Network Mock Draft Simulator sees the Falcons standing pat and selecting Trey Lance out of North Dakota State in this 2021 NFL First Round Mock Draft.

In terms of raw talent, Lance owns the highest ceiling as well as one of the lowest floors. He likely needs time to refine his game but having Matt Ryan playing at a high level allows Arthur Smith and the team to be patient.

The Bengals have two options here, and both revolve around Joe Burrow. They can either select a pass catcher in Ja’Marr Chase or protect him with Penei Sewell. After watching his knee and subsequently his rookie season come crumbling down, it would be egregious for Cincinnati not to add more protection for Burrow.

Get the casting calls started as the Hollywood script comes true. Joining Tua Tagovailoa in South Beach is former Alabama teammate DeVonta Smith. Outside of his weight, no argument can be made about his ball skills. DeVante Parker will maintain his X role, and Smith will fluctuate between Z and inside the slot. He is the best route runner in this draft class and possesses a catch radius that can’t be overlooked.

The Dolphins falling in love with Smith means the Detroit Lions’ dreams come true as Ja’Marr Chase is still on the board at No. 7 in this 2021 NFL First Round Mock Draft. Chase is a dominant receiver who plays with a physicality we do not typically see. He comes in as the WR1 and helps fill the void left from Kenny Golladay and Marvin Jones.

Matt Rhule and company feel that Darnold is worth the investment, and rather than adding another QB, they select the best athlete in this class with Kyle Pitts. Having been heralded as the second coming of Tony Gonzalez, Pitts is virtually destined to represent the Panthers in the Hall of Fame.

Given the rumors surrounding Mac Jones going third overall, the Broncos are thrilled to see him slide to No. 9 in this First Round Mock Draft ran by the PFN Mock Draft Simulator. The jury is out on Drew Lock’s trajectory, and bringing in Jones turns up the heat on Lock to perform in 2021.

The Dallas Cowboys badly need reinforcements at cornerback. Luckily for them, they get to select their favorite and take Patrick Surtain II as the first CB off the board. Surtain joins former teammate Trevon Diggs and is an excellent fit for Dan Quinn’s Cover 3 scheme.

Championship teams are built in the trenches. Having addressed the receiver position during free agency, Dave Gettleman turns his attention to the offensive line. Several scouts have Rashawn Slater as the highest-rated tackle in the class. He also boasts the skill set to move into the interior if need be. Now that Daniel Jones won’t be running for his life, we get to see what he can do with his new weapons.

In this 2021 First Round NFL Mock Draft, the Eagles could not be happier with how the board fell. They could have gone with CB but chose to add weapons to the offense and grab Jaylen Waddle, a former teammate of Jalen Hurts. This would move Jalen Reagor to a more natural position and give the Eagles one of the fastest WR duos in the NFL.

The Chargers exited free agency as one of the most improved franchises and now fill another hole with Christian Darrisaw. After watching Burrow go down for the season, the Chargers know they must protect their own superstar in Justin Herbert. Darrisaw defies physics — guys his size should not be able to move the way he does.

One way to help generate more pressure up front is by making the QB hold on to the ball longer. Due to the depth at EDGE in the draft, the Vikings opt to address the pass defense and add arguably the best CB with Jaycee Horn. Horn holds the size and speed to be an impact defender from Day 1, and his willingness to tackle should quickly endear him with Mike Zimmer.

One of the intriguing storylines to watch during the draft is how far Micah Parsons will slide. While there are questions surrounding off-field issues, the play on the field could not be any clearer. Parsons is a menace who at one point was viewed as a top-five overall pick. Bill Belichick is not worried about anything off the field as Parsons buys into the “Patriot Way,” and New England gets the best player available.

We have our first curveball as the PFN Mock Draft Simulator puts together a trade. The New Orleans Saints sent picks No. 28, 60, and 105 in exchange for pick No. 16 and select Jeremiah Owusu-Koramoah. An LB from Notre Dame, Owusu-Koramoah can do it all on defense.

While an undersized “traditional” LB, he plays very well in coverage, can come off the edge, and even drop back to the secondary. The Saints need help all across the defense, and Owusu-Koramoah serves as a Swiss army knife for the team.