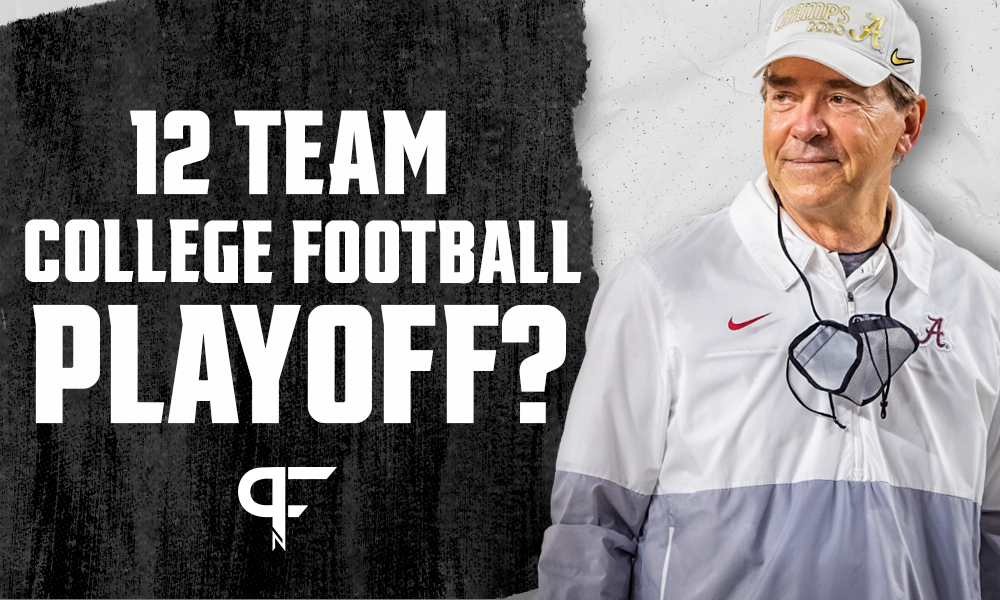 12 Team College Football Playoff: Who would be in if it started this season?

By James Fragoza
June 11, 2021
What's in this article? Click to show
How will the 12-team College Football Playoff work?
Who would make the new format in 2021?
Want 2022 NFL Draft prospect news? Want to do your own mock draft?

On June 10, reports came crashing in that the College Football Playoff committee would consider a proposal that expands the playoffs from a four-team layout to 12. As we move further away from the NFL Draft and closer to the 2021 college football season, which 12 teams would crack the 12-team playoffs if it began this season?

How will the 12-team College Football Playoff work?

In the 12-team field, the four highest-ranked conference champions would receive seeds 1-4 and a first-round bye. Seeds 5-12 would then battle in the first round, with the higher-ranked teams owning home-field advantage. The quarter and semifinals would take place in bowl games while the national championship bout remains at a neutral site.

CFP executive director Bill Hancock stated, “This proposal, at its heart, was created to provide more participation, for more players, and more schools.” As such, the 10 FBS commissioners, as well as Notre Dame athletic director Jack Swarbrick, will discuss and vote on the proposal in person late next week.

Using PFN’s early 2021 college football rankings as our guide, which 12 teams would make the playoffs if the proposal passed for this season?

If they hope to make serious noise in 2021, Howell will need to maintain, if not exceed, his success from 2020 with new weapons at his disposal.

Tom Allen’s squad finished with their highest winning percentage (.750) in program history since 1967. Their only two losses came against the national championship runner-up Ohio State Buckeyes and the offensive juggernaut Ole Miss Rebels in the Outback Bowl.

After suffering a season-ending ACL tear, Michael Penix Jr. returns along with electric wideout Ty Fryfogle. On the defensive side of the ball, Tiawan Mullen and Marcelino Ball should anchor a talented unit. Facing AAC powerhouse Cincinnati (more on them later) in Week 3 offers Indiana the opportunity to prove their worth early in the season.

Following an impressive freshman campaign in which he threw for 3,502 yards and 30 touchdowns while completing 71.9% of his passes, Kedon Slovis struggled with his accuracy in 2020. Still, with a full offseason under his belt, Slovis can return to form in 2021. Amon-Ra St. Brown and Tyler Vaughns leave big shoes behind at WR, but Drake London and Co. can fill in admirably.

Led by one of the best edge rushers in the 2022 NFL Draft class, Drake Jackson, the defense can make noise in the Pac-12.

Under head coach Luke Fickell, the Bearcats have generated a 31-6 record over the last three seasons. It all came together in 2020 when Cincinnati played their way to an AP-ranking high of 6, earning an appearance in the Peach Bowl. Although they ultimately fell to Georgia 24-21, the Bearcats proved they could compete against a top Power Five program.

Matt Campbell is a three-time Big 12 Coach of the Year, but Iowa State has not won the conference under his reign. Still, 2021 may be their best chance yet. The Cyclones bring back most of their starters on both sides of the ball next season. Brock Purdy, Breece Hall, and Charlie Kolar highlight the offense, with Mike Rose, Will McDonald, and Greg Eisworth II anchoring the defense.

Edge rusher Kayvon Thibodeaux is arguably the best player in college football. He isn’t the only stalwart on Oregon’s defense, though. Noah Sewell, Mykael Wright, and Isaac Slade-Matautia are imposing and will torture opposing offenses. Replacing three secondary members like Jevon Holland, Deommodore Lenoir, and Thomas Graham Jr. is no easy matter, but the Ducks are up to the task.

The QB position is still a significant question mark with Tyler Shough transferring to Texas Tech, but redshirt senior Anthony Brown is talented in his own right. Furthermore, it helps when you are handing the ball off to CJ Verdell and Travis Dye.

Starting the year 4-2, Georgia looked like an entirely different team with JT Daniels at the helm. The Bulldogs finished the year 4-0, including a 24-21 Peach Bowl victory over eighth-ranked Cincinnati.

As for the defense, Georgia should remain stout. The secondary suffered many losses, but Tykee Smith, Lewis Cine, Derion Kendrick, and Kelee Ringo should step right in and produce. Not to mention Jordan Davis, Nakobe Dean, and Adam Anderson create one of the most staunch front sevens in the nation.

The new format spurns the Aggies as we have them ranked as the fourth-best team entering 2021. However, due to the 12-team playoff proposal, they would be placed behind Ohio State as the first four seeds belong to conference champions (Alabama wins the SEC).

TE Jalen Wydermyer is quite possibly the best at his position, as is DeMarvin Leal on the defensive line. Isaiah Spiller is an electric running back, and Kenyon Green is a mauler at guard — though signs point to him starting at left tackle in 2021.

Regardless, all that talent would go to waste if the Aggies do not have a competent signal-caller. Currently, it is a battle between redshirt freshman Haynes King and redshirt sophomore Zach Calzada. King is my pick for Kellen Mond‘s successor, as the four-star dual-threat QB has the requisite physical ability to start at the position.

Succeeding Justin Fields is a challenging endeavor, but C.J. Stroud has the traits and support to ensure the Buckeyes do not fall apart on offense. The Buckeyes return the most lethal WR duo in Chris Olave and Garrett Wilson, as well as TE Jeremy Ruckert. Speaking of lethal duos, Ohio State also sports the best tackle tandem in Thayer Munford and Nicholas Petit-Frere.

Similar to every other year, the Buckeyes are loaded on defense. Haskell Garrett, Tyreke Smith, and Zach Harrison generate pressure with ease, while Sevyn Banks, Marcus Hooker, and Josh Proctor lockdown in coverage. There are holes at linebacker, but Ryan Day and his staff shouldn’t have an issue supplementing them.

When you boast one of the best quarterbacks in the country, you will make waves in college football. Led by offensive guru Lincoln Riley and QB Spencer Rattler, OU’s offense should shred defenses in 2021.

The defense has never been their strong suit, but Nik Bonitto and Perrion Winfrey can swing plays independently. But will they be enough for the Sooners to challenge for a national championship?

Out goes Trevor Lawrence, and in comes D.J. Uiagalelei. That is the college version of going from Brett Favre to Aaron Rodgers. In just two starts last year, Uiagalelei generated 4 touchdowns and nearly 800 yards passing. So what can he do with a full season in Year 2 of his collegiate career?

Lyn-J Dixon and Justyn Ross are excellent weapons, and the offensive line should hold their own. Clemson’s real depth comes on the defensive side of the ball. Bryan Bresee, Myles Murphy, Tyler Davis, James Skalski, and Andrew Booth Jr. strike fear into opposing offenses on their own. As with every other team on this college football playoff list, there will be further players who emerge as key contributors throughout the year.

Not much has to be said here. Nick Saban. Done.

In all seriousness, they lost talent, but Alabama never has trouble replenishing their roster. Bryce Young will have the supporting cast to help him grow as a starter with top OT Evan Neal up front, Brian Robinson in the backfield, and WRs John Metchie III and Slade Bolden out wide.

The defense is no slouch either, with Christian Harris, Will Anderson, Jordan Battle, Josh Jobe, Malachi Moore, and Henry To’o To’o leading the charge.