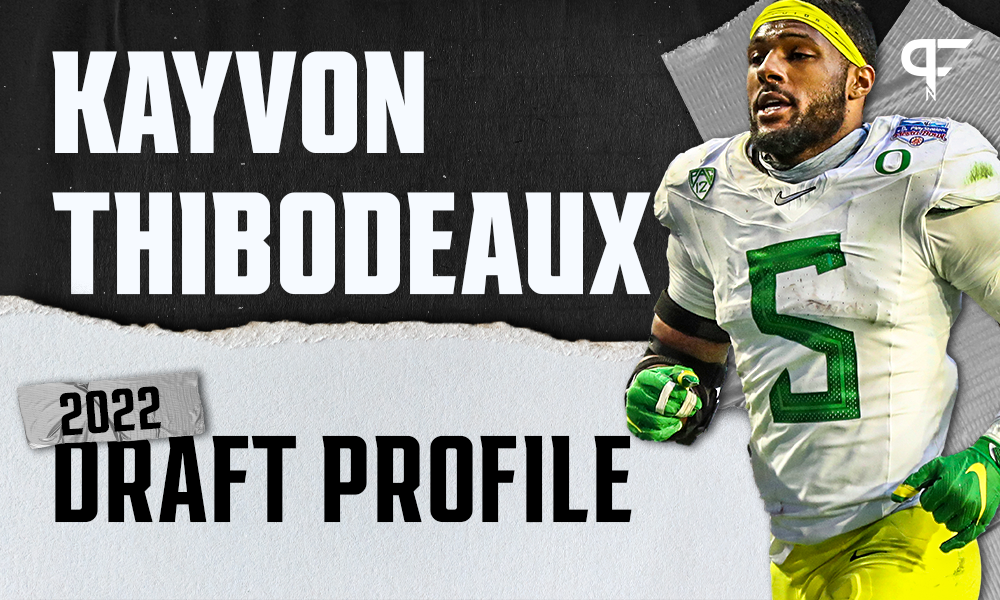 Does Oregon Ducks defensive end Kayvon Thibodeaux have the potential to be the No. 1 overall pick in Sin City for the 2022 NFL Draft?

Last year’s draft class of pass rushers lacked a truly dominant prospect. However, in the 2022 NFL Draft, Oregon DE Kayvon Thibodeaux stands out as the leader of the pack and as a potential No. 1 pick. What makes the former five-star recruit such a tantalizing prospect? We have a look at his early scouting report to find out.

Thibodeaux has received plenty of attention early in his college career and remains a popular pick as the best player in the 2022 NFL Draft class. Even with just a cursory glance at his athletic profile, it’s easy to see why.

At 6’5″, he has the ideal size to play the defensive end position in the NFL. Thibodeaux is also gifted with extraordinary length. He can utilize his long arms to keep opposing offensive tackles at bay while also wrapping up ball carriers in the ground game.

Thibodeaux is blessed with insane athletic ability. He’s fast, explosive, agile, with an exceptional change-of-direction ability. His explosive first step at the line of scrimmage causes nightmares for the man tasked with halting his progress to the quarterback. The Oregon defensive end effortlessly translates speed to power as a rusher and routinely forces linemen backward into their quarterback’s path.

Thibodeaux’s agility also helps him from a pass-rush perspective

The combination of agility and speed gives him a clear advantage in rushing off the edge. Yet, he can also effortlessly transition from attacking outside to winning inside, possessing pass-rush versatility.

For as impressive as his pass-rush potential at the next level is, Thibodeaux also dominates in the ground game. He has the football intelligence to fight through traffic and locate the ball carrier. His speed ensures he can chase down a ball carrier further downfield, and he also demonstrates an excellent understanding of angles to make a play.

Off the field, he appears to be a highly intelligent, driven, and motivated individual. He has spoken at length =about using his platform to help support his local neighborhood of South Central Los Angeles.

For all his talent, there are areas where Thibodeaux can improve ahead of the 2022 NFL Draft.

At present, he predominantly relies on winning with speed to power. While this has been successful in his college career, he will need to consistently deploy other tools of the trade to succeed in the NFL. The Oregon Duck has exhibited some tools in his arsenal, but he needs to refine them and use them more often.

Although Thibodeaux’s speed and agility mean he can win off the edge, he needs to ensure that he keeps his balance. There were several examples on tape where he loses his footing as he bends around the edge, leaving some production on the table.

Finally, he can add a little more muscle to his frame ahead of his transition to the NFL.

These are small areas for improvement, and it’s easy to forget that Thibodeaux will only be a junior at the start of the 2021 college football season. There’s no reason to believe that he won’t be dominant once again this season, cementing his status as a potential No. 1 pick in the 2022 NFL Draft.

It feels like Thibodeaux has been primed for NFL Draft greatness forever. The former five-star recruit was the second-ranked weakside defensive end in the 2019 recruiting class, the second-best player in the nation, and the best player in California. Furthermore, 247 Sports ranked him the 49th best player in their history of ranking high school recruits.

It’s clear why Thibodeaux was so highly regarded coming out of high school. A man amongst boys at 6’5″, the athletic defensive end was cut from a different cloth than everyone he faced. As a sophomore at Dorsey High School, he was named the CIF Los Angeles City Section Division I Defensive Lineman of the Year after logging 17 sacks and 27 tackles for loss.

As impressive as that performance was, Thibodeaux would elevate his game as a junior. Transferring to Oaks Christian High School, he registered 99 tackles, 20 sacks, and 28 tackles for loss. Additionally, he flexed positional versatility by snagging 9 receptions, 134 receiving yards, and 3 touchdowns as a tight end. An unstoppable force, Thibodeaux earned multiple Player of the Year and Defensive Player of the Year Awards. Meanwhile, he helped power Oaks Christian to a Division II title.

Thibodeaux wrapped up his high school career in now trademark dominant style. During his final season, he tallied 54 tackles, 18 sacks, and 5 forced fumbles. The outstanding production took him to 54 sacks in 4 years and earned him the Californian Defensive Player of the Year Award. Furthermore, he was named a first-team All-American.

During this time, a fierce battle raged to secure his college football commitment. Thibodeaux received over 25 offers. Narrowing down his options, he visited Alabama, Florida, FSU, and Oregon. Following the conclusion of his high school career, he committed to Oregon, stating at the time:

“There were a lot of reasons why I chose Oregon. I have a great comfort level with the coaching staff and I know I can go there and get developed. Oregon wanted me a defensive end and that’s where I’m comfortable. They want me with my hand in the ground, off the edge, rushing the passer.”

The transition from high school to college isn’t always easy, but Thibodeaux proved immediately comfortable as a defensive end for Oregon. Actually, comfortable doesn’t quite describe it. He proved to be destructive and downright dangerous for the Ducks as a true freshman in 2019.

Although he’s only credited with making five starts, he played in all 14 games during his first season. He registered 1 tackle on his debut against Auburn, but the potential from the explosive pass rusher was plain to see.

The production would come soon after. In Thibodeaux’s fifth appearance (against Cal), he made his mark. Earning Pac-12 Defensive Player of the Week honors, he racked up 2 tackles for loss, 2 sacks, and his first and only career forced fumble. It was the first of multiple 2-plus sack games. In the Pac-12 Championship Game, he set a game record with 2.5 sacks against Utah, blocking a punt in the process.

Thibodeaux was as advertised

The Oregon defensive end set program records for sacks by a freshman and led the team with 14 tackles for loss. His 9 sacks were also the most by a Pac-12 freshman since 2009. Unsurprisingly, Thibodeaux was named the Pac-12 Freshman Defensive Player of the Year, a consensus Freshman All-American, and earned first-team All-Pac-12 recognition from the Associated Press.

Amongst all the uncertainty of the Pac-12’s 2020 season, it would have been easy for Thibodeaux to suffer a sophomore slump.

Yet, the Oregon defensive end’s relentless pursuit of excellence continued last year. He added another 42 tackles, 9.5 tackles for loss, 3 sacks, and 3 pass deflections to his résumé. He also led the team in sacks and tackles for loss for the second consecutive season. Additionally, he led the Pac-12 conference in quarterback pressures and quarterback hurries.

More honors, and increased expectation ahead of the NFL Draft

As he had in his freshman season, Thibodeaux once again demonstrated a penchant for the big game. The Oregon DE was named the Pac-12 Championship Game MVP after logging 12 hurries, 2 tackles for loss, and 1 sack — the Ducks defeated USC.

Although the season would end with defeat against Iowa State, Thibodeaux secured first-team All-Pac 12 honors. Furthermore, he was named as a second-team All-American by multiple outlets.

The Oregon DE heads into his junior season riding a wave of expectation. The Ducks have a new defensive coordinator in Tim DeRuyter. As a result, Thibodeaux is expected to play outside linebacker this season. Can he live up to that expectation and assert himself as a potential No. 1 pick in the 2022 NFL Draft?