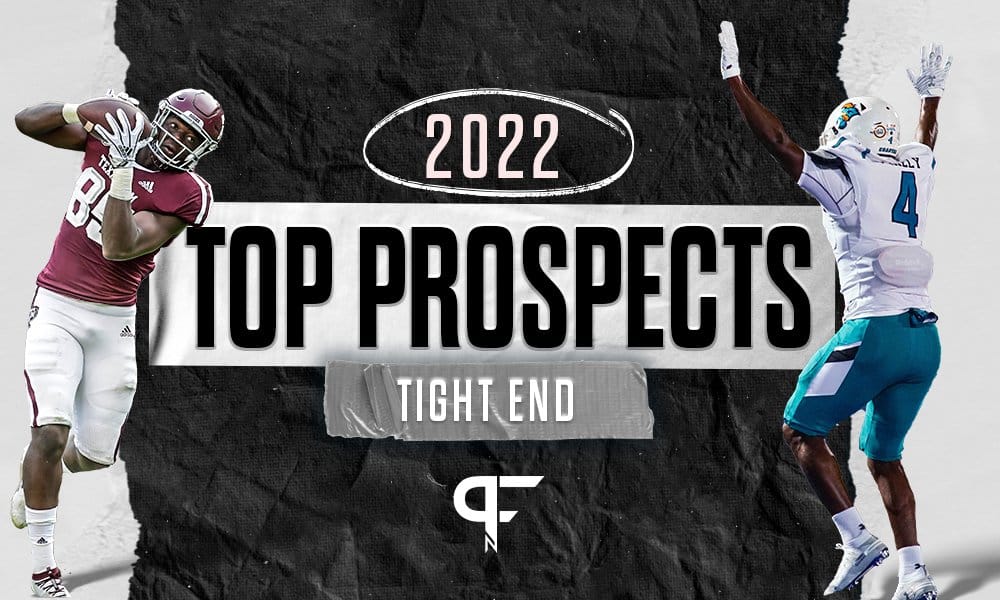 The 2022 NFL Draft tight end class promises to be packed with talent, but who are the top prospects to look out for at the position?

Although a Kyle Pitts-esque unicorn is unlikely to emerge from the top tight ends in the 2022 NFL Draft class, there is still plenty of talent to get excited about this fall. As the college football season nears, who should you be paying attention to on Saturdays with future NFL Sundays in mind?

Although no football has been played since the last NFL Draft, we’ve been grinding the tape in anticipation of another exciting class. These rankings of the top tight ends in the 2022 NFL Draft result from hours of film work and observations made during the last cycle. However, we still have a whole season of college football for players to develop, and ultimately, these are subject to change throughout the year.

Texas A&M hasn’t been a hotbed of tight-end talent. Just 11 tight ends have been drafted to the NFL out of College Station, with Martellus Bennett’s second-round selection 13 years ago remaining the highest an Aggies’ tight end has been selected. Jalen Wydermyer, however — showing first-round talent — has the potential to surpass Bennett.

Wydermyer was the early frontrunner of the top tight ends in the 2022 NFL Draft back in May, and nothing that we’ve seen through summer scouting has done anything to change that opinion. Considered to be “just” a big wide receiver when he arrived at College Station, he’s developed quickly into one of the best tight ends in college football.

At 6’5″ and 255 pounds, Wydermyer is a physical specimen. As a result, he makes for an excellent red-zone threat while having the physicality to battle in contested-catch situations. Although willing as a blocker, if he can add upper body strength while working on technique this fall, he will ultimately elevate his stock even further.

Alabama tight end Jahleel Billingsley may be the ultimate boom or bust as a top tight end in the 2022 NFL Draft class. Recently the subject of a scathing Nick Saban press conference after some preseason practice issues, his outlook for the season is unclear. He already has a relatively small sample size to study. Meanwhile, weighing a lean 230 pounds at 6’4″, he lacks the physique of some of the other tight ends on the list.

Still, the boom potential far outweighs the bust concerns at this point in the 2022 NFL Draft cycle. Billingsley is one of the best athletes in the class, having boasted impressive high school testing that has translated almost seamlessly to the college football level. He’s fast downfield and explosive off the line. Billingsley also possesses remarkable lateral agility, and his raw explosiveness is amply demonstrated with his leaping ability.

Behind his lean exterior lays a ferocious competitor. Billingsley isn’t afraid to be physical as a blocker while using his athleticism to close on his man quickly. Despite this, blocking will be the most significant cause for concern for NFL teams. He’ll also need to demonstrate improved technique and strength during the season.

There’s an old expression that goes, “It’s not the size of the dog in the fight, but the size of the fight in the dog,” and it may as well have been written for Washington Huskies tight end Cade Otton. Although 6’5″ and 240 pounds is hardly small, Otton isn’t the biggest tight end in the class, but you wouldn’t know that by watching him play.

He’s as physical as they come as a blocker and isn’t afraid to put himself in the thick of it down in the trenches. Additionally, he flashes solid blocking technique — something you would expect from the son of a coach.

His game is more than just blocking, however. Otton showcases impressive route-running ability and a reliable pair of hands. His numbers from 2020 — 18 receptions, 258 yards, 3 touchdowns — may not be spectacular, but they all led the team. Furthermore, his 14.3 yards per catch were amongst the highest of the top tight ends in the 2022 NFL Draft class.

Coastal Carolina was one of the most entertaining teams to watch in college football last season, and tight end Isaiah Likely emerged as a genuine receiving threat. The 6’4″, 245-pound TE led the team with an astonishing 20 yards per reception. He also tallied 601 receiving yards and snagged 5 touchdowns. The athletic pass catcher has totaled 74 receptions, 1,138 receiving yards, and 15 touchdowns during his career.

The numbers are impressive, but statistics don’t automatically make you one of the top tight ends. Likely, however, has alluring upside as a 2022 NFL prospect. He has surprising pace for his size, exhibiting the ability to take the top off a defense. One of his greatest assets is his route-running prowess. Furthermore, Likely poses a contested-catch threat with physicality and hand strength.

Moreover, Likely has proven he can be physical both as a blocker and when breaking tackles. If he delivers another season similar to his 2020 campaign, there’s no reason to believe he won’t be one of the top tight ends in the 2022 NFL Draft class.

Having made just 2 catches as a freshman, Cincinnati tight end Josh Whyle enjoyed a breakout year last season. The 6’6″ pass catcher secured 353 yards at 12.6 yards per catch while adding 6 touchdowns to his résumé. One of those touchdown grabs came against Georgia — an insane diving catch coming back to the ball, giving the Bearcats a lead going into the half.

With exceptional hands that resulted in zero recorded drops during the 2020 college season, Whyle owns incredible upside as a receiver. He also possesses unexpected explosiveness for a 6’6″, 240-pound tight end.

Although he won’t test as the fastest in the class, there are multiple examples on film where you presume the play will come to an end, but he hits the burners, often resulting in huge gains. Despite his lean frame, Whyle shows effort as a blocker. However, compared to some of the other top tight ends in the 2022 NFL Draft class, he somewhat lacks in that area.

What other tight ends could improve their draft stock?

Despite being one of the smaller tight ends in the 2022 NFL Draft class, Brant Kuithe is undoubtedly one of the top players at the position heading into the college football season. The former high school athlete turned Utah tight end has impressive athletic attributes combined with football intelligence and a physical approach to the game that belies his size.

A genuine pass-catching threat, Kuithe averaged over 10 yards per catch as a freshman before leading the team in receptions, yards, and touchdowns in 2019. His track background is apparent in his play speed and acceleration, while his lateral agility helps him create separation with route-running prowess.

Kuithe exudes competitive toughness, something that is evident as a pass catcher and blocker. His 6’2″, 230-pound frame will pose problems in terms of blocking strength, but the Utah TE throws everything he has into every block.

The eyes of the NFL community will be on Reno this fall, more than any previous season. With Carson Strong pegged as a potential first-round quarterback, they also boast sensational wide receiver talent Romeo Doubs who will attract attention. Furthermore, in Cole Turner, they have one of the top tight ends in the 2022 NFL Draft class.

Like Whyle at Cincinnati, Turner is another tall, lean, pass-catching tight end machine. He measures in at 6’6″, with Nevada listing him at 240 pounds. The Wolfpack TE has all the attributes you want to see in a pass-catching tight end. He can track the ball well in the air, possesses good awareness, explosion at the line of scrimmage, and works with good coordination and hands to be a reliable catcher of the ball.

A potential sleeper in the 2022 NFL Draft class, James Mitchell has the skill set to be one of the top tight ends this fall. As versatile as any prospect at the position, he has scored rushing touchdowns in both of his starting seasons while securing 6 receiving touchdowns. In addition to tallying 435 receiving yards, he led the Hokies in receiving scores last season.

His versatility is best demonstrated by the laundry list of alignments attributed to the Virginia Tech tight end. Mitchell has been used inline, out wide, in the slot, as an H-back, and even in the backfield. Furthermore, he has special-teams value as a punt returner.

A reliable receiver who uses his 6’3″, 240-pound frame to be physical at the catch point and after, Mitchell has an impressive motor as a blocker. The Virginia Tech TE brings strength to that element of the game that some of his contemporaries lack.

On an Oklahoma offense teeming with talent, it speaks volumes about Stogner’s ability that he was third on the team last season with 422 receiving yards. The Sooners tight end averaged 16.2 yards per catch while adding 3 touchdowns. Remarkably, he achieved this despite missing the final three games of the season.

Back fully healthy, Stogner promises to be one of the top tight ends in the 2022 NFL Draft. Still, it could have been very different. What was thought to be just a bruise sustained on a heavy hit turned into a life-threatening infection that required emergency surgery.

On the field, Oklahoma’s 6’6″, 251-pound tight end is a matchup nightmare. He’s adept at using his size to gain leverage and box out defenders. Again, Stogner’s size makes him an impactful blocker, with the ability and understanding to seal off defenders to create rushing lanes.

Although former Wisconsin head coach and athletic director Barry Alvarez will depart from the Badgers later this year, his grandson — tight end Jake Ferguson — will continue the family tradition at the program. But that isn’t the only tradition Ferguson is set to continue.

He’s the latest Wisconsin player at the TE position to excel at run blocking. If you want to succeed as a tight end for the Badgers, you have to be able to impact the ground game, and this is Ferguson’s calling card.