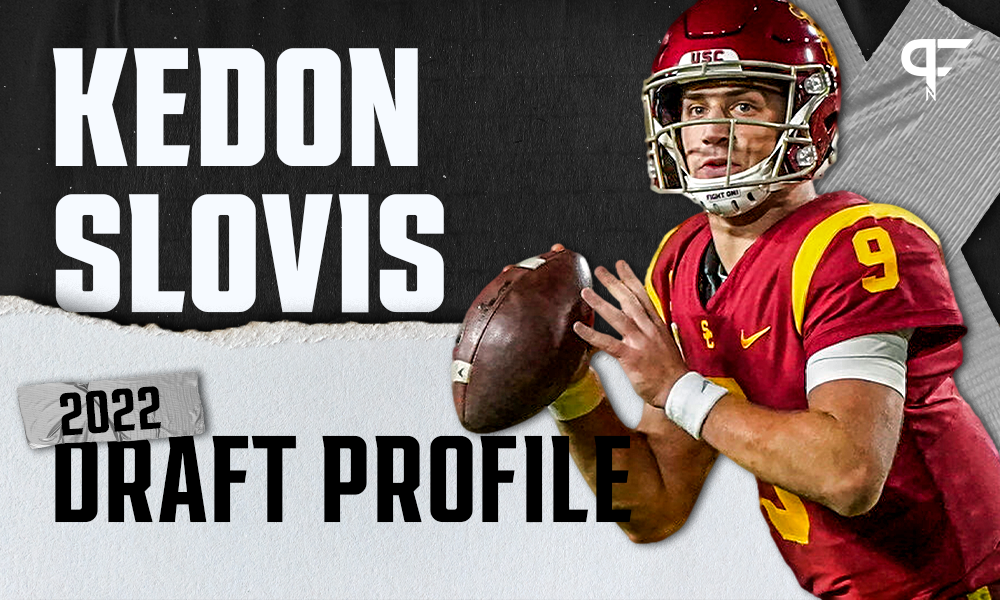 Following a phenomenal freshman campaign, USC quarterback Kedon Slovis earned early NFL Draft hype. However, after a tumultuous 2020 season, his projection looks far from clear. Were the struggles from last season noted in Slovis’ scouting report a product of injury and uncertainty? Will a return to freshman form ensure the USC QB garners first-round attention in the 2022 NFL Draft?

A two-year starter and a team captain last season, Slovis has shown himself to be a leader since assuming the role of starting QB for USC. Last season alone, he led the Trojans to three comeback wins in the final two minutes of the fourth quarter. Two of those wins came on the road, further demonstrating an ability to win under pressure. On one hand, it should be noted that reduced or zero capacity stadiums due to the global situation mitigates the importance of this somewhat.

In addition to this leadership, Slovis displays an excellent level of football intelligence. He often surveys the field with urgency, moves quickly from one read to the next, and makes great decisions based on what he sees from the defense.

Slovis also uses his football intelligence to manipulate the pocket, feel for pressure, and extend plays whether with a quick dump-off or with his legs. Although he won’t impress in the 40-yard dash, Slovis has sufficient athleticism and displays short-area burst when required.

Slovis’ most impressive trait is his ball placement. He routinely puts the ball in a position where his receivers can make plays. During his college career, Slovis has shown he can make plays to all areas of the field. His 2019 tape, in particular, shows some beautiful deep ball throws.

Overall, Slovis is extremely technically sound. It’s clear that he had early involvement with high-level quarterback coaching. That said, there are examples where a late release causes issues for him. That manifests itself in a multitude of ways.

There are examples where his last release leads to balls being batted down easily at the line of scrimmage. At other times, the late release causes accuracy issues. Most dangerously, however, is that it gives defenders time to read the play and get in position to cause a turnover.

Although Slovis excels with accuracy and ball placement on his throws, there are inconsistencies in arm strength. This was especially prevalent last season when he appeared to put a lot of effort into getting zip on the ball. This resulted in some wobbly-looking passes on throws that he would routinely make in 2019.

The latter issue may be a result of not being fully healthy last season.

As a junior, he completed 64 percent of his passes for 2,987 yards, 32 touchdowns, and 5 interceptions. During his senior season, Slovis threw for 2,542 yards, 18 touchdowns, 6 interceptions, and a 62.2 completion percentage. Slovis earned USA Today All-Arizona honorable mention in both seasons while learning the game under the tutelage of Hall of Fame quarterback Kurt Warner.

Although his head coach raved about his “poise, talent, arm strength, leadership, and toughness,” Slovis was only viewed as a three-star recruit and the 26th pro-style quarterback in the 2019 class. He earned offers from eight programs, but USC was the clear frontrunner. The Trojans had long been a favorite to land Slovis, and at the time of his commitment, he said: “Their academics are so great there. The football program is storied.”

Little did Slovis know that he was about to create a story of his own in Southern California. After impressing during camps, the new USC QB secured the backup role to former five-star passer J.T. Daniels.

When Daniels suffered a serious injury in the season opener against Fresno State, however, Slovis had an early opportunity to make his college football debut. Displaying what would become trademark accuracy, he completed 75% of his passes for 57 yards, but unfortunately, threw his first career interception.

With Daniels done for the season, Slovis was named the starting quarterback for the next game against Stanford. In a performance that electrified college football, Slovis threw for 377 yards and 3 touchdowns with zero interceptions. Incredibly, the new USC QB completed 84.8% of his passes.

A star had been born.

Despite missing the game against Washington with a concussion, Slovis started 11 games in 2019. He ended the season with 3,502 passing yards, 30 touchdowns, and completed 71.9 percent of his passes. In fact, his completion percentage broke Andrew Luck’s Pac-12 record that had stood since 2011.

Slovis’ passing attempts, completions, and yardage all broke program freshman records. In the regular-season finale against UCLA, he set a new single-game passing record for the program with 515 yards.

Setting expectations ahead of his sophomore season

Slovis earned Pac-12 Offensive Freshman of the Year honors; the Associated Press named him their Pac-12 Newcomer of the Year. He unseated Daniels as USC’s starting QB, leading to Daniels’ transfer from the program. Expectations became sky-high that Slovis could deliver the Trojans a Pac-12 Championship.

Amongst the disruption of the 2020 college football season, Slovis led USC to a 5-0 record and a place in the Pac-12 Championship Game against Oregon. His completions, passing yards, completion percentage, and points responsible for led the conference. Slovis threw for 5 touchdowns in two games (Washington State and UCLA) while engineering come-from-behind wins in three games. As a result, he earned first-team All-Pac-12 honors.

In the Pac-12 Championship Game, however, Slovis completed a career-low 53.8% of his passes. Slovis also threw 3 interceptions as the Trojans struggled to contain the pass-rush presence of Oregon’s Kayvon Thibodeaux.

For the second consecutive season, Slovis’ final game would be marred by an arm injury. This time it was a sprained shoulder. The previous year, the USC QB had suffered a sprained elbow, which many people had attributed to a decline in performance.

Reports out of spring camp suggest that the most recent injury has healed well. Trojans head coach Clay Helton described Slovis as being healthy and strong.

Can the USC QB have a season that helps fans and analysts forget his perceived sophomore slump and catapult him back into contention for a first-round selection in the 2022 NFL Draft?