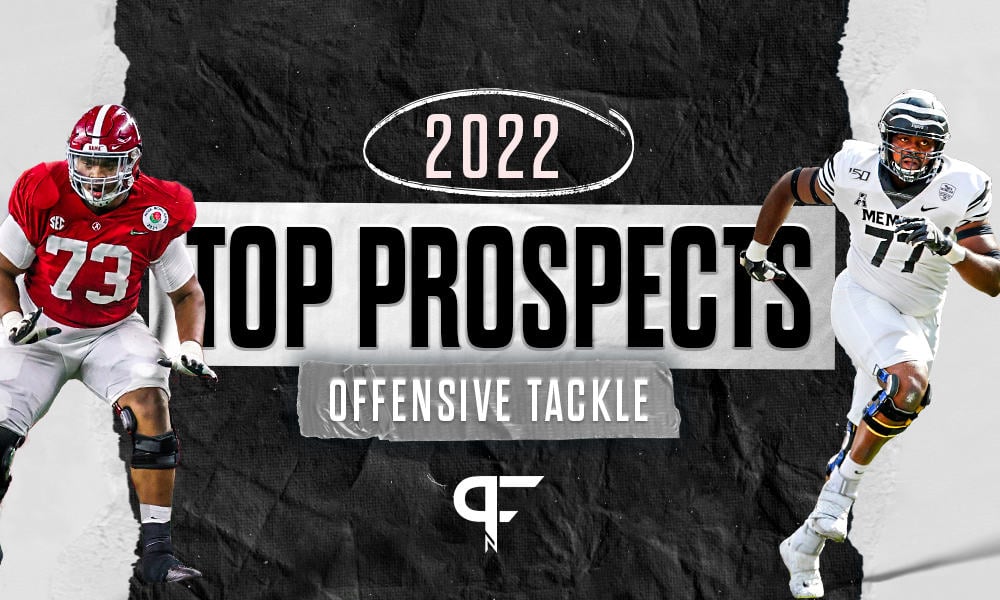 There were 25 total offensive tackles, including four first-rounders, drafted to the NFL less than two weeks ago. How do you follow up on one of the most impressively deep classes we’ve seen in recent years? There may not be a Penei Sewell-esque star in the coming crop. However, there’s still plenty of talent to watch out for next year. We take a look at the top offensive tackles in the 2022 NFL Draft.

A five-star recruit from the IMG Academy, scouts viewed Evan Neal as the best offensive tackle in the 2019 recruiting class. He found a way to contribute immediately on arrival in Tuscaloosa, playing multiple positions on the line.

Although he’d been a standout high school offensive tackle, he carved out a starting role at left guard, using his immense size to open holes in the ground game. In 2020, he reverted to his natural position of tackle, holding down the right side of the line as Alabama’s offense destroyed every opposition.

According to Alabama, he played 810 snaps last season while allowing just 1.5 sacks. He is expected to transition to left tackle next year as Alex Leatherwood heads to the NFL. In doing so, Neal will put himself at the top of the list of offensive tackles available in the 2022 NFL Draft.

At 6’7″ and 360 pounds, there isn’t another tackle in the class with the same physical characteristics. He has long arms, which help shield him from oncoming pass rushers. Meanwhile, he displays solid mobility for a man of his size.

Penn State enjoyed a top-15 offense in 2019 and one of the reasons for it was the emergence of left tackle Rasheed Walker. Having seen playing time in four games before redshirting his freshman season, Walker started 13 games protecting the blindside for Sean Clifford last year.

Furthermore, he was instrumental in paving the way for impressive rushing performances by Journey Brown and Noah Cain. He continued his string of starts into 2020, where he earned third-team All-Big Ten honors despite the disruption of the season.

Walker was a highly regarded prospect coming into the 2020 season, so it should be no surprise that he is considered one of the top offensive tackles in the 2022 NFL Draft class. At 6’6″ and 312 pounds, he has prototypical NFL size and combines that with impressive upper body strength.

In the games observed from 2019 and 2020, there are multiple examples of Walker using his strength to discard pass rushers to the floor. Additionally, he has a high level of football intelligence and demonstrates the footwork ability to mirror pass-rush moves.

Although he is one of the more inexperienced offensive tackles in this 2022 NFL Draft class, there’s every reason to believe that Charles Cross will be one of the top names available next April. The Mississippi State left tackle has only played one entire season, but he demonstrated plenty of exciting potential in those 10 starts. With another full season under his belt, he can become one of the best in the nation.

A former five-star recruit, Cross redshirted in 2019 before making his debut start in the Bulldogs’ brutalizing of LSU. Throughout the 2020 campaign, he proved to be equally adept in pass protection and run blocking.

Cross is explosive and aggressive off the snap and displays excellent footwork. At 305 pounds, he is one of the lighter tackles in the class. Still, he doesn’t give anything away in terms of play strength. He could probably add 10 pounds without impacting his overall athleticism, preparing himself for the rigors of the NFL.

Standing at an impressive 6’8″, Obinna Eze is comfortably one of the tallest tackles in college football. Unsurprisingly, his journey to the football field came by way of the basketball court. Originally from Nigeria, he came to the US with the hopes of making it to the NBA. Ultimately, he left Davidson Academy as a four-star offensive tackle, ranked in the top 25 at the position.

After redshirting in 2017, Eze became a three-year starter for his hometown Memphis Tigers. During that time, the left tackle has demonstrated strength and athleticism in addition to owning the sort of length that makes it difficult for pass rushers to get around. On top of his obvious advantages as a pass protector, he can impact the ground game.

Having graduated from Memphis, his transfer to a Power Five program in TCU should only enhance his reputation as one of the top offensive tackles in the 2022 NFL Draft class.

Analysts viewed Abraham Lucas as one of the best offensive line prospects before this year’s draft. However, the Washington State right tackle opted to return to the Cougars following the disruption of the 2020 college football season. It’s a major coup for the WSU, who return four of the five starters from last year’s line and are set to be one of the best units in the Pac-12 conference.

Lucas already has 30 starts at right tackle, but the further experience should help secure his place in the top offensive tackles for the 2022 NFL Draft. Having bulked up by almost 60 pounds since arriving at Washington State, he already has an NFL-ready frame at 6’7″ and 319 pounds. He’s put that frame to excellent use, too, establishing himself as one of the best pass-protecting tackles in the nation.

Athletic and intelligent, if Lucas can improve his performance as a run blocker over the fall, he could easily force his way into first-round consideration.

Who rounds out the list of the top 10 offensive tackles in the 2022 NFL Draft?

Unlike some of the other top offensive tackles in the 2022 NFL Draft class, Miami’s Zion Nelson wasn’t a heavily recruited or highly ranked prospect coming out of high school. He received just three stars and 247 Sports listed him as the 114th offensive tackle in the country. Despite this, he was thrust into the action as a true freshman, starting all 13 games at left tackle.

Nelson has undergone a significant physical and technical transformation over the past two years for the Hurricanes. Arriving in Miami at a lanky 240 pounds, he played at 280 pounds in 2019. Nelson was still somewhat on the skinny side of his 6’5″ frame, even with that weight gain. He bulked up further to just over 310 for 2020 and will be heavier again this season. That mass has helped him become stronger while not diminishing his athletic ability.

His play showed definite progression last season. If he can take a similar leap over the course of 2021, Nelson could establish himself as one of the best offensive tackles in the class. For now, however, that remains a projection.

Since arriving at Ohio State, Thayer Munford has been responsible for protecting the blindside of two future first-rounders — Dwayne Haskins and Justin Fields. He also paved the way for multiple 1,000-yard seasons from J.K. Dobbins. With 46 games under his belt, Munford will be one of the most experienced offensive tackles in the 2022 NFL Draft class.

History and experience count for nothing without ability, but thankfully, Munford has plenty of that too. The 6’6″ and 321-pound left tackle has great length, which he uses to keep opposing pass rushers at bay. Moreover, Munford demonstrates football intelligence, keeping his head on a swivel to pick up unblocked blitzes. He takes good angles to seal off defensive linemen in the ground game, leaving wide open holes for running backs to take advantage of.

Ole Miss possessed one of the most electric offenses in college football last season. Much of the Rebels’ success is attributed to the play-calling of Lane Kiffin and Matt Corral at quarterback, but their vision couldn’t be realized without the efforts of the offensive line. One under-the-radar contender for the top 2022 NFL Draft offensive tackles is Ole Miss left tackle Nick Broeker.

Although he only became the starting left tackle in 2020, the junior has 22 total appearances under his belt already. Despite only playing left tackle, NFL teams may decide to move him inside to guard due to his 6’4″ frame. Still, another season of performances like his bout against Alabama should earn him a shot at playing tackle in the league. Broeker owns stellar athleticism and has the mindset of a mauler.

A former five-star recruit and two-year starter for Tennessee, Wanya Morris was the prized target out of the transfer portal for multiple teams this winter. It’s hardly surprising that the 6’5″ junior should have garnered such attention. He’s athletic, strong, and with 17 starts at left tackle in the SEC, experienced. Furthermore, he allowed just 2 sacks on 195 pass-blocking plays in 2020.

Morris’s transfer to Oklahoma should help him secure his reputation as one of the top offensive tackle prospects in the 2022 NFL Draft. The Sooners have a reputation for offensive line excellence, led by coach Bill Bedenbaugh. The program has produced six offensive line draftees in the last five years alone. With that level of pedigree, Morris will only get better throughout the 2021 college football season.

UCLA’s Sean Rhyan isn’t a prospect who has received a great deal of attention in early mock drafts and big boards. Yet, he has the talent to be one of the top offensive tackles in the 2022 NFL Draft. At 6’5″ and 318 pounds, he combines prototypical NFL size with strength and impressive athleticism. He brings a mauler mentality to the run game and flashed some technical refinement as a pass blocker.

Although the schedule limited him to seven starts last season, the junior already has 19 starts under his belt. Last season, he saw the opportunity to showcase his ability against stout USC and Oregon defensive lines. Impressively, he held his own against consensus No. 1 2022 NFL Draft prospect Kayvon Thibodeaux. More performances like that in the 2021 college football season will ensure he flies under the radar no longer.

Oliver Hodgkinson is an NFL Draft Analyst for Pro Football Network. You can follow him on Twitter at @ojhodgkinson.