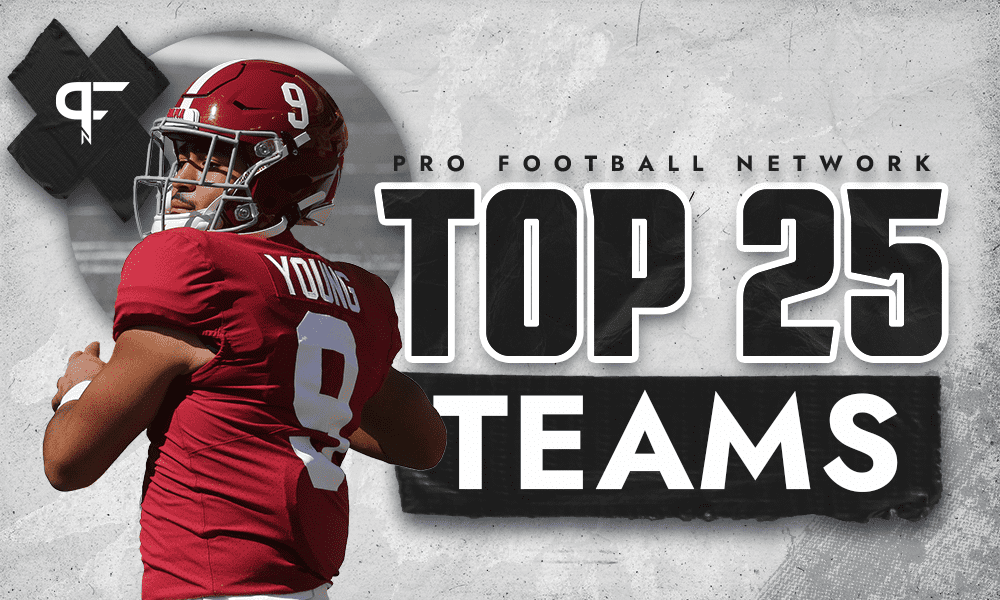 There is no denying the amount of talent USC lost this spring. Multiple players along the defensive interior, as well as receivers Amon-Ra St. Brown and Tyler Vaughns, took their talents to the next level. Still, the Trojans bring back arguably their most important player in QB Kedon Slovis. In 2019, the former three-star recruit lit the Pac-12 on fire following injuries at the position. However, he didn’t showcase anywhere near that deadly accuracy last season.

Of course, Slovis was recovering from injury, worrying about the safety of family and friends due to the pandemic, and the Pac-12 conference struggled to decide on what to do with the season. Although weapons on both sides of the ball need to be reloaded, Drake London and Bru McCoy can hold down the offense while potential top 10 pick in the 2022 NFL Draft, Drake Jackson, anchors the defense.

Can the Cincinnati Bearcats repeat their heroics of last year? An undefeated regular season, AAC Championship title, and a narrow defeat to Georgia in the Peach Bowl will take some beating. Additionally, they held their highest ranking since their final season under Brian Kelly, where they reached a high of fourth in the AP rankings.

Returning your star quarterback is an excellent way to start. Desmond Ridder could have declared for the 2021 NFL Draft but instead opted to return for another go-around. Ridder presents a dangerous dual-threat which may be even more critical for the Bearcats this season with the departure of running back Gerrid Doaks. Watch out for tight end Josh Whyle emerging as a dangerous receiving threat.

Although Cincinnati lost the heart of their secondary, Ahmad “Sauce” Gardner and Coby Bryant give them a dangerous pair of playmakers on the perimeter. They also return star pass rusher Myjai Sanders who should be a dominant defensive force with one eye on the 2022 NFL Draft.

He’s won Big 12 Coach of the Year three times, but the conference trophy itself still eludes Matt Campbell. If there’s ever a year the Cyclones were to compete for the title, 2021 would be it.

The Cyclones bring back most of their talent on both sides of the ball next season. Brock Purdy will once again lead the offense, but the star of the show may very well be running back Breece Hall. The impressive running back finished sixth in Heisman contention last year after putting up 1,752 total yards and 23 total touchdowns.

Elsewhere on offense, standout receiver Xavier Hutchinson will return for his senior season. And on defense, Iowa State will benefit from the presence of first-team All-American Mike Rose. He’s not alone, however, as Will McDonald, Tayvonn Kyle, Greg Eisworth II, and Eyioma Uwazurike will also contribute.

When you have the best player in college football on your roster, you’re likely to be at the sharp end of the 2021 rankings. Kayvon Thibodeaux is the headliner, but this Oregon roster is stacked with talent on defense. Noah Sewell, Justin Flowe, and Isaac Slade-Matautia are all beasts who will have the opportunity to dominate in the Pac-12 this season.

Additionally, sources inside the program believe that the secondary will be even better this season. Despite losing Jevon Holland, Deommodore Lenoir, and Thomas Graham Jr., defensive backs Mykael Wright, DJ James, and Verone McKinley III will pick up the baton.

The Ducks could be ranked even higher in our rankings if it wasn’t for the quarterback situation. Anthony Brown is yet to prove himself as a top-quality passer. Still, the duo of CJ Verdell and Travis Dye in the backfield should alleviate some of those concerns.

After an initially shaky start with Stetson Bennett and D’Wan Mathis under center, JT Daniels looked to have the Bulldogs humming along nicely down the stretch. If he can continue that momentum with an entire offseason free from injury, then Georgia should be in a position to contend in the SEC this coming season.

Of course, that projection is clouded somewhat by the loss of George Pickens. Nevertheless, they have plenty of receiving talent to mitigate that loss. Not to mention, Zamir White, Kendall Milton, and James Cook should ensure that the Bulldogs have a diverse ground game to complement Daniels’ passing game.

Despite losing most of their starting secondary to the NFL, there’s plenty of defensive pieces to get excited by. Lewis Cine and Tykee Smith make for an explosive safety duo. Kelee Ringo should emerge at the cornerback position. Also, players such as Jordan Davis, Nakobe Dean, and Adam Anderson will provide a ferocious front seven.

Losing the most productive college football QB over the past two seasons hurts, but the Buckeyes have dealt with these kinds of transitions before. Highly-touted recruit C.J. Stroud has the physical traits to succeed Justin Fields, and he’ll have the necessary support as well.

On offense, Ryan Day should still have plenty of talent to work with. Wide receivers Chris Olave and Garrett Wilson make up one of the league’s most intimidating duos. Tight end Jeremy Ruckert will factor in as a pass catcher. And on the line, tackles Thayer Munford and Nicholas Petit-Frere should hold down the edges.

Defensively, it’s the same story for the Buckeyes. The pipeline continues to produce. Haskell Garrett, Tyreke Smith, and Zach Harrison highlight the front four, while Sevyn Banks, Marcus Hooker, and Josh Proctor bolster the secondary. Replacing last year’s linebacker group will be a tall task, but Teradja Mitchell and Dallas Gant bring plenty of potential there as well.

On paper, Texas A&M might have the best roster in these 2021 college football top 25 rankings. In Jalen Wydermyer, they have the best tight end in the nation. Isaiah Spiller has the ability to be a dominant running back. Kenyon Green is expected to line up at left tackle, but he might be the best guard in college football.

DeMarvin Leal is a dominant defensive force who could easily be a top-10 pick in the 2022 NFL Draft. In Leon O’Neal and Demani Richardson, the Aggies have a safety duo that challenges Georgia for the best in the nation. Myles and Jaylon Jones have flashed playmaking potential at cornerback.

As you can see, the roster is stacked. Yet, the uncertainty at the quarterback position could limit the potential of this talented group. Whether it’s Haynes King or Zach Calzada, it remains to be seen who wins the starting job. Interestingly enough, King is a four-star dual-threat that drew comparisons to Ryan Tannehill out of high school.

Of all the teams at the top of our college football top 25 rankings for 2021, Oklahoma has the most certain situation under center. After some early wobbles, Spencer Rattler had the Sooners singing down the stretch of last season. Rattler headlines an exciting Oklahoma offense that can rip apart opposing defenses in multiple ways.

Theo Wease, Jadon Haselwood, and Marvin Mims may be the best trio of receivers in the nation. Kennedy Brooks and Tennessee transfer Eric Gray have the makings of a dangerous double-headed monster in the backfield. There are some offensive line changes, but the incoming Wanya Morris should ensure protection for Rattler.

With the likes of Nik Bonitto and Perrion Winfrey, the Sooners are also well set up on defense. The only thing that could stand in the way of a national championship run is the self-sabotaging nature of the Big 12 conference.

Even with the departure of Trevor Lawrence, the Clemson Tigers should continue to be one of the best teams in college football. D.J. Uiagalelei has demonstrated the ability to lead the Clemson offense in his time in relief of Lawrence.

Don’t forget that Uiagalelei put up nearly 800 yards and 4 touchdowns in two games last season. He projects to be the most certain of all the new starting quarterbacks that many of the teams in the college football top 25 are breaking in.

As crucial as Lawrence has been to the Tigers, one of the critical components of Clemson’s most recent national championship success was a devastating defense. With Bryan Bresee, Myles Murphy, and Tyler Davis, they have the foundation of a similarly disruptive unit. Add in the return of linebacker James Skalski and the emergence of CB Andrew Booth Jr., and Clemson should once again be at the top of the college football rankings in 2021.

Despite losing a whole host of talent to the NFL Draft, it’s hard to argue with a Nick Saban-led Alabama team. It’s even harder to look past the Crimson Tide when you consider the talent that they return.

The Crimson Tide have one of the best offensive tackles in the nation in Evan Neal. The linebacker group led by Christian Harris and Will Anderson got even richer with the transfer of Henry To’o To’o. Josh Jobe, Malachi Moore, and Jordan Battle constitute a formidable secondary.

Arguably the most significant question marks for Alabama are on offense. Can the likes of John Metchie III and Slade Bolden step up and lead the WR room? Will freshman Agiye Hall provide the pass-catching spark? Can Brian Robinson fill Najee Harris‘ considerable shoes? How will Bryce Young perform in his first season as the full-time starter?

Although those questions are yet to be answered, you can be sure that Saban has the cheat sheet.