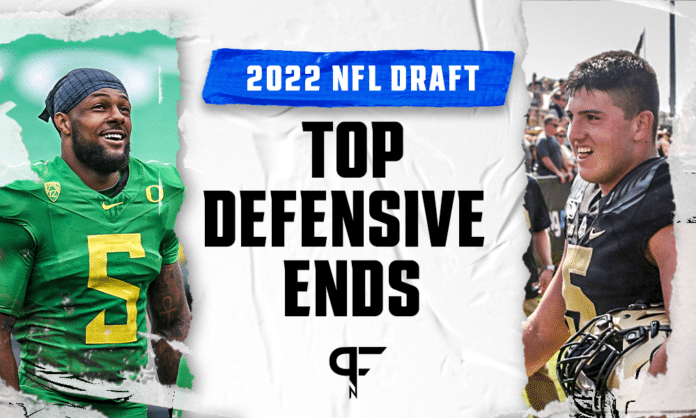 After an offense-heavy draft in 2021, there is more defensive promise in 2022. Who will be the top defensive ends for the 2022 NFL Draft?

After a relatively disappointing defensive draft last April in terms of first-round pass rushers, the top of the 2022 NFL Draft could feature multiple defensive ends. Led by Oregon’s Kayvon Thibodeaux, there are several first-round prospects. There are even more pass-rush playmakers ready and waiting to push their way up draft boards this fall. Who should you be watching out for during this college football season?

In the months between the end of the NFL Draft and the start of the college football season, we’ve poured over hours of tape to compile our top defensive ends for the 2022 cycle. Like any preseason list, these are subject to change throughout the year as some defensive ends elevate their stock and others falter along the way. However, it presents a list of prospects to watch out for in the 2021 college football season.

Ever since his explosive freshman season when the college football world was introduced to Kayvon Thibodeaux, the Oregon DE has been earmarked to be at the top of the 2022 NFL Draft. Thibodeaux is the top defensive end and is also widely regarded as one of the top players in the entire 2022 NFL Draft class.

That helps him be a menace at the line of scrimmage — both in terms of winning as a pass rusher and making plays on the ball in the air. In addition to being a phenomenal pass rusher, Thibodeaux is impressive against the run. His ability to neutralize the opposition’s ground game is underrated.

While Thibodeaux would benefit from refinement of his pass-rush toolbox, his ability to convert speed to power effortlessly will leave many offensive linemen embarrassed this fall.

Easily the most physically imposing of all the top defensive ends in the 2022 NFL Draft, George Karlaftis combines size, power, and explosion to be a dominant defensive lineman. The Grecian Goliath measures in at 6’4″ and 275 pounds and is one of the strongest defensive ends in this upcoming class.

Given his size, the assumption is that Karlaftis wins with strength alone. On the contrary, he is deceptively athletic for his size. He’s adept at combining speed with a high motor to finish plays. Furthermore, Karlaftis has the ability to play both inside and out, making him extremely versatile. In addition, it further increases his value as one of the top defensive ends in the 2022 NFL Draft.

Although a confluence of circumstances ensured that 2020 was a disappointing affair, there’s every reason to believe that Karlaftis can recapture the freshman form that catapulted him into national attention. Despite his late introduction to the sport, the Purdue pass rusher racked up 17 tackles for loss and 7.5 sacks in the 2019 campaign.

While some NFL Draft prospects will ascend during the 2021 college football season, Myjai Sanders is carrying momentum from the previous campaign. Last fall, the Cincinnati pass rusher was a late riser up draft boards, earning buzz as a potential Day 2 selection.

As Cincinnati emerged as a genuine College Football Playoff contender, Sanders amassed 31 tackles, 10.5 tackles for loss, and 6 sacks. Meanwhile, he flashed further defensive disruption with 5 pass breakups. Ultimately, he opted to return to the Bearcats for his senior season. As a result, Sanders enters the 2022 NFL Draft cycle as one of the top defensive ends in the class.

The production alone was impressive. However, beyond the statistics, Sanders is an alluring prospect. He has excellent size at 6’5″ and 258 pounds, with incredible length. The Cincinnati pass rusher has tremendous athletic upside, with explosiveness and the ability to bend around the edge.

Throughout the 2020 campaign, Sanders showed improved hand usage at the line of scrimmage. If he continues on an upward curve with all those attributes, he will comfortably end up as one of the top defensive ends in the 2022 NFL Draft.

Like Sanders above him, Kingsley Enagbare returned to school despite receiving significant interest in the previous draft cycle. The 6’4″, 240-pounder significantly elevated his stock in a season where he accounted for half of the Gamecocks’ sacks. Moreover, he accounted for 60% of South Carolina’s forced fumbles.

The statistics are sensational. Yet, they don’t define what makes Enagbare one of the top defensive ends in the class. The versatile DE has the physicality to play multiple positions along the defensive line. He could conceivably play as a 3-4 defensive end or a 3-technique in a base 4-3 scheme.

Enagbare creates power out of his frame while possessing excellent length. Similar to Karlaftis, don’t be fooled into thinking that size only equals power. The South Carolina DE has plenty of juice to take off after the passer. Additionally, in the “Buck” position for South Carolina, he has been tasked with dropping back into coverage. This has provided a further showcase of his athletic ability to impact multiple phases of the game.

Enagbare should become one of the top defensive ends in the 2022 NFL Draft class with another season of profound performances under his belt.

The Ohio State Buckeyes have a rich recent history of sending defensive line talent to the NFL. Although Zach Harrison may not be cut from the same cloth as Chase Young and the Bosa brothers, he can still be one of the top defensive ends in the 2022 NFL Draft.

The former five-star recruit — who was ranked as the best player in the state of Ohio in the 2019 recruiting class — has yet to produce to the level of expectation statistically. Last season, in his first opportunity to be the dominant leader of the defensive line, he secured only 4.5 tackles for loss and 2 sacks. In his two-year career, Harrison has contributed just 10 tackles for loss and 5.5 sacks.

Nevertheless, the Buckeyes are ready to rely on Harrison more this year following the loss of an abundance of defensive production. Moreover, he appears to have developed physically over the offseason.

Ohio State lists him at 6’6″ and 268 pounds, and he looked impressive at Ohio State’s spring game. He’s demonstrated that he can win with pure size, strength, and hand violence. If Harrison showcases those more consistently while adding a more explosive presence, he will cement his place as one of the best pass rushers in the class.

Which defensive ends currently round out the top 10?

Despite not having a standout defensive prospect in the 2022 NFL Draft, Tyreke Smith joins Harrison to give the Buckeyes two of the top 10 defensive ends in the class. At 6’3″, 260 pounds, Smith might not appear as imposing as his teammate. Yet, there’s no doubting his ability as a ferocious pass rusher.

The Ohio State defensive end has an incredible athletic profile. He possesses a delightful change-of-direction ability, remarkable lateral agility, and, to top it off, he has excellent play speed. When he pieces everything together, Smith breezes past offensive tackles with relative ease.

Smith also converts speed to power exceptionally well. Although there are some areas for improvement, the Ohio State pass rusher’s length, speed, and strength — combined with his ability to disrupt both around the outside track and from the interior — make him one of the best defensive ends in the 2022 NFL Draft class.

Last season, an injury deprived Aidan Hutchinson of the experience he needed to help elevate his draft stock. As a result, he returns to Michigan for the 2021 season. Hutchinson is expected to lead the Wolverines’ defense and help cement his position as one of the top defensive ends in the 2022 NFL Draft.

Hutchinson figures to be one of the most versatile of all the DE prospects on this list. He has seen time at multiple alignments in the Michigan defense, ranging from a traditional defensive end to a 3-technique, and even lined up over the center.

Hutchinson can be successful across the line due to his size and length. Powerful, yet surprisingly agile for his size, he also plays the game with competitive toughness.

Despite losing Ronnie Perkins to the NFL, the Oklahoma Sooners have sneakily got one of the best pass-rush units in college football this fall. In Perrion Winfrey, they have one of the best defensive tackles in the 2022 class. Additionally, OLB Nik Bonitto is one of the best at his position.

Then there’s Isaiah Thomas. Having made little impact in his first three seasons with the Sooners, Thomas exploded into life during his redshirt junior campaign. The imposing defensive end racked up 12 tackles for loss amongst 31 total tackles. Furthermore, he tallied 7.5 sacks while registering his first career forced fumble.

Explosive, physical, and strong, Thomas has the size and length that will leave NFL teams drooling this fall. His ability to pass rush both inside and outside offers intriguing versatility. As well as impressive pass-rush ability, the Oklahoma DE is an extremely competent run defender.

Listed at 6’5″ and 268 pounds, Thomas has the frame to add more weight and strength this season. That will be a terrifying prospect, as he establishes himself as one of the top defensive ends in the 2022 NFL Draft class.

After sending Tarron Jackson to the NFL just months ago, the Coastal Carolina Chanticleers have the potential to send another pass rusher to the pros. While Jackson was highly regarded in scouting circles, Jeffrey Gunter has the potential to be even better as one of the top defensive ends in the 2022 NFL Draft class.

Quietly productive as a freshman, Gunter has been defensively dominant in the rest of his college football seasons. Punctuated by a year on the sidelines in 2019, Gunter racked up 14 tackles for loss and 5 sacks in 2018, followed by 12.5 tackles for loss and 6 sacks last fall. Impressed? The Coastal Carolina defensive end also led the nation with 6 forced fumbles in 2020.

Tall, strong, and long, Gunter plays the game with a relentless motor. Equally adept at terrorizing quarterbacks or setting the edge in the run game, his usage at Coastal gives him additional versatility. Last season alone, he neared 100 pass-coverage reps, using his length and athletic ability to add another dimension to his threat as a pass rusher.

Ali Gaye sneaks into our top 10 defensive ends in the 2022 NFL Draft class. However, his stock is rapidly on the rise, with the potential to elevate himself into first-round contention. The LSU pass rusher can already be found in several first-round mock drafts, including from Pro Football Network’s Cam Mellor.

The hype comes on the back of a sensational first season at the FBS level. In 2019, Gaye was playing football for the junior college program Garden City. He was impressive there, but no one could have predicted that he would outstrip his JUCO production in his first campaign in the SEC. Gaye racked up 9.5 tackles for loss with 2 sacks and a forced fumble last fall.

The NFL will absolutely love Gaye’s size and football smarts. At 6’6″, 250 pounds. he’s a force off the edge who wins with strength, quick feet, and ability to read the game. With some analysts predicting big things for LSU this season (admittedly, I’m not one of them), Gaye could be the riser in this defensive end class.