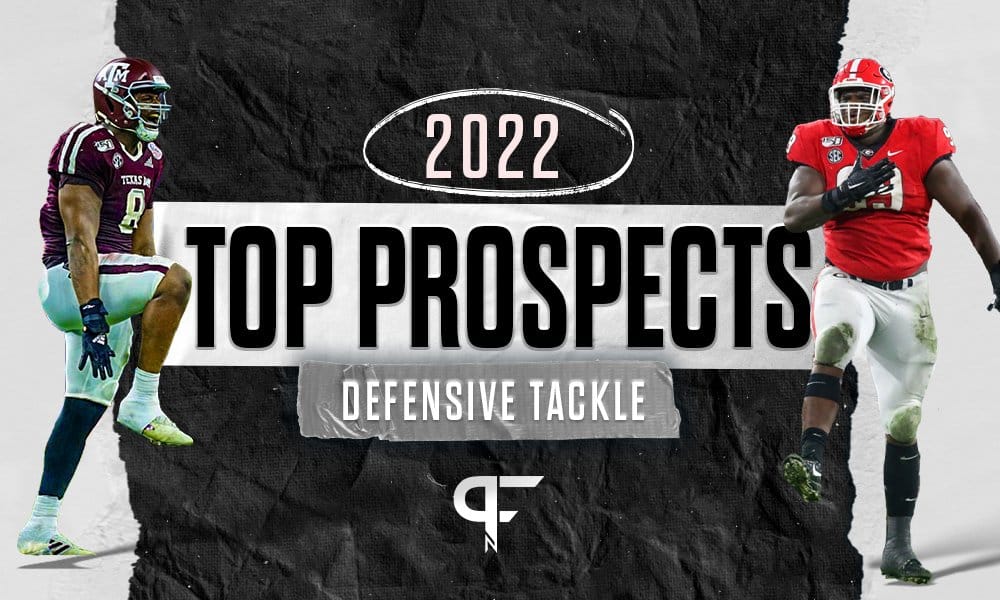 Considered one of the weaker position groups in the 2021 NFL Draft, just 19 defensive tackles heard their name called in Cleveland. Furthermore, there were no interior defensive linemen selected in the first round. Will next year’s crop at the position have any more success? We take a look at the top defensive tackles in the 2022 NFL Draft.

These are my very early rankings of the top defensive tackles in the 2022 NFL Draft class. The rankings are compiled from observations made while watching players in the 2021 class and early adventures into 2022 summer scouting. As such, they’ll be subject to change throughout the summer and 2021 college football season.

Although being a five-star recruit isn’t an automatic indicator of success at the college and NFL level, DeMarvin Leal has lived up to his high school billing. The No. 2 defensive tackle in the 2019 class made an immediate impact for the Aggies. Starting seven games as a true freshman, he became a productive member of the Texas A&M defensive line. In a standout sophomore season, Leal racked up 37 tackles, 7 tackles for loss, 2.5 sacks, and secured an interception against Alabama.

The statistics are impressive. However, they shouldn’t be used as a singular measure of ability. So, what is it that makes Leal one of the top defensive tackles in the 2022 NFL Draft class? He is the perfect storm of athleticism, versatility, size, and length. He has lined up in multiple alignments during his short college career, giving him valuable versatility at the next level.

His athleticism makes him a force as a pass rusher. Meanwhile, his length helps him cause problems at the line of scrimmage against the run. At 6’4″ and 290 pounds, he moves incredibly well, although it would be beneficial to add lean weight to help with strength and power.

Just one season removed from playing JUCO football for Iowa Western, Perrion Winfrey is set to be one of the top tackles in the 2022 NFL Draft class. He arrived in Oklahoma as one of the top JUCO recruits in the nation, having enjoyed a prolific two seasons at that level. Winfrey racked up 55 tackles, 23 tackles for loss, 9.5 sacks, and a forced fumble during his time at Iowa Western.

Despite stepping up to the Big 12 level, he proved a disruptive force for the Sooners in 2020. He struggled to turn disruption into production, he still tallied 5.5 tackles for loss and half a sack. He also generated special-teams plays, blocking a Texas kick in the Red River Rivalry game.

Winfrey has trimmed down to 290 pounds over the offseason, with the supposition that carrying less bulk in his 6’3″ frame will help him finish plays. He is athletic, impressively strong, and displays technical ability to disengage from blockers. If he can have a productive final season for the Sooners, his draft stock should soar ahead of next spring.

When you think of defensive tackles, you immediately conjure up the image of the big men in the trenches. Well, they don’t come much bigger than Georgia’s Jordan Davis. Listed at 6’6″ and 300 pounds coming out of high school, the former four-star recruit tips the scales at 340 pounds ahead of his senior season for the Bulldogs.

Davis was expected to declare for this year’s draft. But, after missing some games with an elbow injury, he opted to return for another go-around. As a result, Davis figures to be one of the top defensive tackles in the 2022 NFL Draft class. During his Georgia career, he contributed 58 tackles, 6.5 tackles for loss, and 5 sacks.

As you would expect for a man of his size, Davis is a force in the ground game. He eats up space and often commands the attention of two offensive linemen. He’s as solid as advertised, rarely caught off-balance. You wouldn’t anticipate the enormous defensive tackle to be explosive and able to play with a low pad level. Yet, these are two of his best attributes.

The Ohio State Buckeyes lost a ton of talent to this year’s draft. Fortunately for them, defensive tackle Haskell Garrett opted to return and is set to be a key contributor on the defensive line. Somewhat of a rotational player before last year, he amassed 20 tackles, 4 tackles for loss, 2 sacks, and even secured a pick-six in a standout season. Arguably his best performances came in the biggest games, with a career-high 5 tackles against Northwestern that included 2 tackles for loss.

His achievements last year are all the more remarkable, considering he suffered a gunshot wound just weeks before the start of the season.

A former four-star recruit whose usage at the college level was debated prior to his arrival in Columbus, he has lined up at multiple alignments during his Buckeyes career. Despite this versatility, his best deployment is as a three-technique defensive tackle. He demonstrates immense strength, using violent hands to win at the line of scrimmage. With a full season devoid of distraction, he can develop into one of the top defensive tackles in this 2022 NFL Draft class.

Just two years ago, Clemson possessed one of the most feared defensive lines in college football. When they all departed to the NFL, there was a slight decline in performance. Still, this coming season they will once again have a ferocious unit in the trenches, and junior defensive tackle Tyler Davis is at the heart of it.

The former four-star recruit made an immediate impact for the Tigers, becoming the first freshman to start at defensive tackle for the program since 1974. Despite suffering an injury last season — an MCL sprain –, he has still amassed 59 tackles, 15.5 tackles for loss, and 8.5 sacks in his short Clemson career.

At 6’2″ and 300 pounds, he isn’t the biggest defensive tackle in this class. However, he combines strength with athletic ability and an understanding of leverage to win at the line of scrimmage consistently. If he can develop a toolbox of pass-rush moves over the next year, he could position himself even higher up this list of the top defensive tackles in the 2022 NFL Draft.

Which defensive tackles currently round out the top 10?

Alabama has had a defensive tackle drafted to the NFL every year since 2015. This year, Christian Barmore was selected in the second round by the New England Patriots, and his departure leaves a hole in the Crimson Tide defensive line. Thankfully for the defending national champions, they have two prospects who will be looking to step in and elevate their 2022 NFL Draft stock.

The first is Phidarian Mathis, who is the better of the two in my first viewing. At 6’4″ and 312 pounds, he has NFL-ready size at the position. Moreover, he’s one of the most experienced tackles in this class (40 appearances). That being said, he hasn’t registered many starts. Although, that should change this season.

Mathis is particularly imposing against the run, yet he did demonstrate some pass-rush ability last season. He displays remarkable strength, and despite not having the quickest get-off, owns ample athleticism. If he can improve his reading of the game, Mathis can develop into one of the top defensive tackles in this 2022 NFL Draft class.

Despite a disastrous 2020 campaign, Cory Durden heads into the coming college football season as one of the most productive defensive tackles in the nation. A combination of injuries and opting out meant he barely contributed to Florida State last season. Still, he has tallied 68 tackles, 13 tackles for loss, 7.5 sacks, and 2 forced fumbles during his career.

With a transfer to North Carolina State, Durden has the opportunity to reignite his game, establishing himself as one of the best defensive tackles in the 2022 NFL Draft. Versatile, robust, and with a clear understanding of leverage, the 6’5″, 312-pound defensive lineman is a difficult proposition for opposing offensive linemen. He has an array of pass-rush moves in his toolbox but needs to be more consistent in finishing the job.

Despite suffering a broken foot in 2018, Myron Tagovailoa-Amosa has made 21 starts for the Fighting Irish as he heads into his senior season. Last year was his most productive to date, emerging as a dangerous threat at the center of the Notre Dame defensive line. He recorded 17 tackles, 5.5 tackles for loss, 2.5 sacks, and a forced fumble. Additionally, he tied his career-high single-game tackle total (4) against Duke.

At 6’2″ and 282 pounds, draft pundits may consider him undersized to play defensive tackle in the NFL. Even now, it appears that he will move outside to play defensive end for Notre Dame this coming season. However, he’s demonstrated that he can win as a pass rusher from the interior despite his size. An underrated athlete, this season will go a long way to determining his 2022 NFL Draft stock.

The second of the Alabama prospects in this list of the top 2022 NFL Draft defensive tackles, D.J. Dale stands at 6’3″ and 307 pounds and has been predominantly tasked with playing nose tackle for the Crimson Tide. Although he lost time to injury in 2020, he has still made 20 starts, having been involved early and often as a true freshman.

He doesn’t jump off the page statistically per se — 38 tackles, 4 tackles for loss, and 1 sack during his career — yet Dale displays stunning power and decent speed from the middle of the defensive line. He also plays with a good understanding of leverage and flashes quality use of his hands.

With Joseph Ossai and Ta’Quon Graham drafted, the Texas defensive unit will be anchored by Keondre Coburn this coming season. Although not the tallest defensive tackle in college football at 6’2″, Coburn is incredibly stout at 348 pounds. He presents as a roadblock on the defensive line, often requiring the attention of double-teams. While this doesn’t allow him to pad out his box score, he still has decent production with 51 tackles, 9 tackles for loss, 3 sacks, and a forced fumble during his Texas career.

His ability to penetrate, combined with decent tackling skills, makes him impactful as a run defender. Despite not having a lot of pass-rush production, his power at the line of scrimmage enables him to help collapse the pocket. As the Longhorns’ defense leader this season, he will have the opportunity to establish himself as one of the top defensive tackles in the 2022 NFL Draft class.