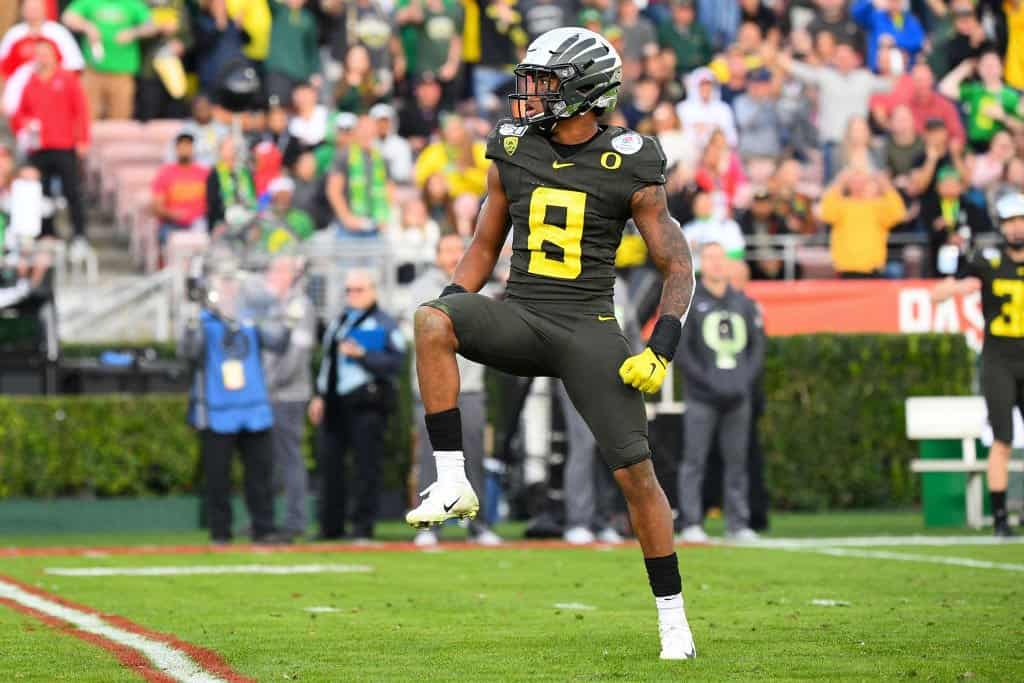 Oregon Ducks free safety Jevon Holland was one of the many who opted out of the 2020 college football season to prepare for the 2021 NFL Draft. At the time, he was regarded as the top safety in the draft. While that opinion is no longer the consensus, Holland is still in the conversation. What makes Holland so enticing, and can he still clamp down on the title of No. 1 safety?

Positives: Explosive, athletic safety with a well-rounded game. Does an outstanding job with coverage assignments, tracks the pass in the air, and displays a good move to the throw. Follows receivers across the middle of the field, effectively times pass defenses, and possesses good hands for the interception.

Displays terrific ball skills, flips his hips in transition, and gets his head back around to locate the pass in the air. Not a liability covering the slot receiver. Aggressive and battles receivers throughout the route. Fires up the field, breaks down well, and gives effort defending the run and stopping screen passes.

Negatives: Possesses a thin frame and struggles in battles. Will be outmatched by bigger receivers. Inconsistent bursting to the ball.

Analysis: Holland is a good athlete and a developing safety who would’ve benefited from another season on the field in 2020. His ball skills and coverage ability are such that teams may consider him at cornerback or nickel back. Holland comes with a large upside but needs time to develop his game.

Versatility has always been a hallmark of Jevon Holland’s game. But in high school, it was a little different. At Bishop O’Dowd in Oakland, California, Holland was a two-way star. For three seasons, he was a starter for the varsity team on defense. In his junior and senior seasons, he doubled as a big-play wide receiver on offense.

Over the course of his defensive career, Holland accumulated 119 total tackles — of which 116 were solo — 5.0 tackles for loss, 13 interceptions, 18 pass deflections, and three forced fumbles. On offense, he caught a total of 47 catches for 1,393 yards and 20 touchdowns. That averages out to almost 30 yards per catch and a score almost every two receptions.

Holland’s pure production efficiency made him a coveted recruit on both sides of the ball. He was listed as a four-star athlete by ESPN and was ranked as the No. 144 recruit in the nation on the same board. Holland confirmed his stellar athletic talents through testing, logging a 4.7 40-yard dash and a 37-inch vertical at 6-foot-1, 180.

Holland attracted nearly every Power Five school west of the Rockies and also gleaned an offer from Notre Dame. He chose to stay in the west. However, instead of taking in-state offers from California and UCLA, he moved north to Eugene, Oregon, where the Ducks patiently awaited his arrival.

Holland ascended to varsity status as a sophomore in high school, and his rise at the college level was just as sudden. Teams normally ease in young defenders by playing them on special teams first. But it was apparent early that Holland’s talents would be wasted in a gunner role.

Holland played in all thirteen games in his true freshman season, starting two at safety. In that span, Holland amassed 42 total tackles, five interceptions, and six pass deflections. He quickly found a niche for himself on the back end, and in 2019, there was no dispute surrounding his return to that role.

Holland’s 2019 campaign with the Ducks

In 2019, Holland started all 14 games. In that span, the Oregon safety put up 66 total tackles, 4.5 tackles for loss, four interceptions, four pass deflections, and a pick-six.

He also showed off his returning chops, particularly in the game against Auburn, where Holland returned three punts for 131 yards. For his production, Holland was given All-Conference honorable mention honors. Additionally, he was a semifinalist for the Jim Thorpe Award.

After his strong true sophomore season, Holland chose to opt out of the 2020 season to prepare for the 2021 NFL Draft. Most players had more to prove in 2021, but Holland, coming off a standout season, decided to bank on himself and preserve his stock.

There is some concern surrounding Jevon Holland’s 2021 NFL Draft projection. Some are torn on whether he’ll play safety or slot cornerback at the NFL level. While this obscurity is a weakness to some, it can also be a strength. Holland has the versatility to play both safety and slot cornerback. He also possesses the skill set to carry that versatility into the NFL.

Holland is an intriguing athlete. He doesn’t appear to have any one dominant trait, but he’s solid overall. Holland has good speed and explosiveness, and although his agility more resembles effort agility and game pace than actual athletic looseness, he has the ability to change directions with relative ease.

He’s also smooth when flipping his hips in coverage, although he can do a better job accelerating out of his turns. The most important trait with Holland isn’t his athleticism, however. It’s his instincts. Instincts are becoming increasingly important for defensive backs at the NFL level, and Holland checks that box definitively.

Holland has a feel for positioning, particularly in run defense. He’s very good at processing congestion quickly and calculating his attack angles. He also has the ability to disengage blocks actively and execute tackles, despite his relatively slim frame.

Holland is a good pass defender, but questions linger about draft projection

As a pass defender, Holland also offers good positioning. Although more explosive players supersede him in downfield situations, which can be a problem, his awareness and feel allow him to maintain a steady baseline.

Holland also offers good processing on the back end, and his quick reaction speed allows him to divert course and adapt at a moment’s notice. He also brings top-notch effort in coverage, sometimes laying out for passes and leaping up for deflections. He’s quite active when he’s in prime position.

While Holland is a well-rounded prospect, he can still improve. Holland can stand to add more to his frame. The Oregon safety can be handled easily by larger blockers. While he engages willingly in press coverage, that engagement can create space for receivers because Holland doesn’t always win those collisions.

Even for his height, Holland’s lesser weight and density prevent him from maintaining a size advantage. That’s something he’ll need to work on at the NFL level. He did measure in ten pounds heavier than expected at his pro day, and still tested extremely well, so that’s a positive indicator for his eventual transition.

Jevon Holland is still one of the better defensive backs in the 2021 NFL Draft, but the safety position’s complexion changed in 2020. Several other contenders for the top spot remained stagnant. However, TCU safety Trevon Moehrig was a massive riser, and he’s now the top safety for a good chunk of the scouting community. Richie Grant also turned plenty of heads at the Senior Bowl.

While Moehrig and Grant are both more disruptive and rangy, however, Holland might offer more versatility. In the modern NFL, that’s a big plus.

Holland gives defensive coordinators a matchup-dependent player who should provide some schematic flexibility. With that being said, Holland’s upside is a legitimate concern, especially if he’s considered in the early rounds.

Dalton Miller made an excellent point in an article in the summer of 2020, saying that Holland, for all his solidity, isn’t even an elite player in the slot. His reaction speed is better back at safety, where he can scan the whole field. Up in the slot, the Oregon safety can be a hair late, and he doesn’t quite have the explosive tools to correct himself consistently.

While he’s a good athlete overall, his lack of elite athletic traits lowers his margin for error, as well as his ceiling.

What are Jevon Holland’s 2021 NFL Draft range and ideal fit?

Because Holland opted out and has no 2020 tape to reflect on, his pro day was the most important event for him this offseason.

At his pro day, Jevon Holland performed very well. As mentioned earlier, he measured in at 207 pounds, when his listed weight in college was 196 pounds. Holland also put up excellent testing numbers, among them a 4.47 40-yard dash, a 35.5-inch vertical, a 126-inch broad jump, and 19 bench reps.

Overall, Holland earned a Relative Athletic Score of 9.53. The Oregon safety checked a lot of boxes, between his speed, explosiveness, and strength, and there’s no doubt a great deal of physical potential with his profile.

What teams overlap with Holland the most?

Teams with a need in the slot, with an additional need for upside at safety, best fit Holland’s skill set. The Saints, Washington Football Team, Raiders, and Cowboys all present potential matches, but his value is likely highest on Day 2.

Jevon Holland is a good football player. More likely than not, he remains as such in the NFL. The questions don’t revolve around his football intelligence but rather his upside as a draft prospect. While he’s not elite in that regard, the Oregon safety offers a beneficial skill set for those who can use it well. And if he can unlock more of his athleticism, he could be a playmaker.