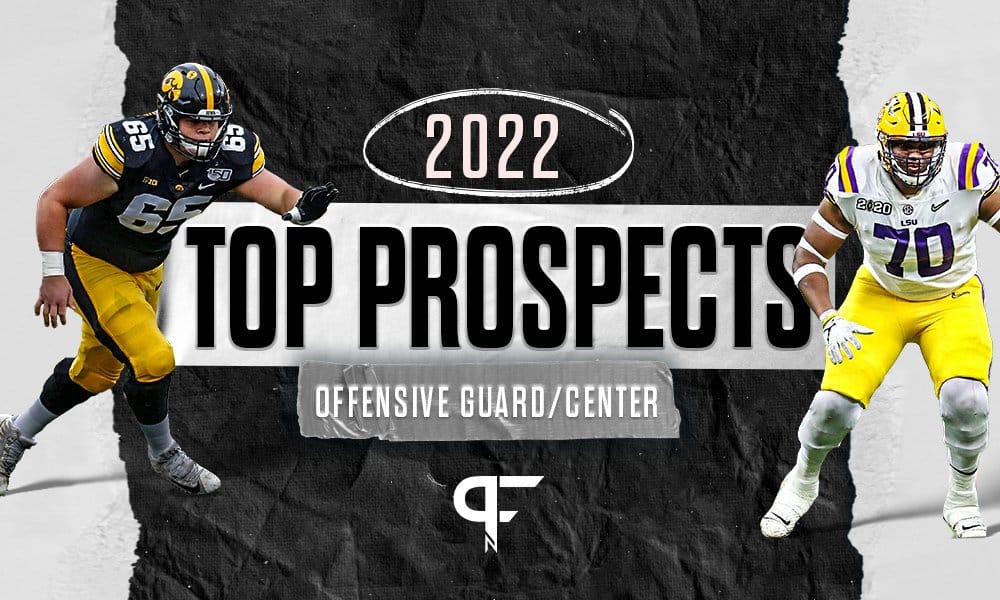 Top guards and centers in the 2022 NFL Draft include Kenyon Green, Lecitus Smith

Who are the top guards and centers in the 2022 NFL Draft? Ahead of the 2021 season, two of our NFL Draft analysts rank the group's talent.

College football is very different from the NFL. But there’s one timeless similarity between the two leagues — everything starts up front. Offensive line play remains one of the most fundamentally important components of football at all levels. Thus, the top guards and centers in the 2022 NFL Draft draw a lot of attention.

I and fellow PFN Draft Analyst Oliver Hodgkinson put our heads together to develop our early rankings for the draft’s top interior linemen. Who comes out in front?

These are our top guards in the 2022 NFL Draft at this point. The group is headlined by a potential top-10 prospect and littered with other guards who possess high-end traits.

Kenyon Green isn’t just the top guard in the 2022 NFL Draft. He’s a top-10 prospect and the top overall offensive lineman on PFN’s preseason Top 50 Big Board. A former five-star recruit, it’s no surprise that Green is so revered.

Green is switching to tackle for the Aggies this year, but much like 2021 NFL Draft first-rounder Alijah Vera-Tucker, he may make the switch back to guard upon entering the NFL. At either place, Green should translate extremely well. He’s a stout, powerful blocker with tremendous energy off the snap, balance, and finishing ability in all phases. Green consistently dominates CFB competition.

Much like Green, Ikem Ekwonu has some positional versatility between tackle and guard. At the next level, however, he’s likely a guard. And if Ekwonu reaches his ceiling, he can be a scary assignment for opposing defensive linemen. At the college level, he already is.

At 6’4”, 320 pounds, Ekwonu has a dense frame, which he compounds with strong proportional length. With explosion off the line and urgency in space, that length can be leveraged into devastating power.

Ekwonu may already be one of the best run blockers in the NFL Draft, if not the best. His pass protection needs to improve, as his hands aren’t always the cleanest. Nevertheless, his sheer displacement potential is enough to place him high on this list.

Full disclosure: I wrote up the profile of Lecitus Smith, and he was one of the biggest surprises of the summer scouting process. I didn’t know what to expect coming into his study, but he quickly distinguished himself as one of the top guards in the 2022 NFL Draft.

For success on the interior, Smith checks a ton of the desired boxes. He has a strong, well-leveraged frame at 6’3”, 320 pounds, but he’s also a stellar athlete. He’s explosive, twitchy, and smooth in open space, and his short-area mobility helps him dish out extra power in one-on-one situations. Smith’s length is visibly below average, and that bumps him down a bit. Nevertheless, he can be an impact starter at guard in the NFL.

The only ACC team with two linemen on this list isn’t Clemson or NC State. No, it’s Boston College. The Eagles are trending up under head coach Jeff Hafley, but former coach Steve Addazio set a solid foundation on the offensive line. That’s where Zion Johnson resides and where he’ll make his money in the years to come.

At 6’3”, 316 pounds, Johnson fits the mold you’ve commonly seen on this list. He’s stout, dense, and incredibly strong. From his years in Addazio’s run-dominant offense, Johnson has legitimate people-moving ability as a run blocker. He’s also shown himself to have the athleticism to pull on zone-blocking plays. He’ll need to improve his pass blocking and consistency in 2021, but his amalgamation of traits is exciting.

Teams commonly seek out offensive linemen with the highly coveted mauler mentality. Every lineman seeks to win, but a smaller number seeks to drive his opponent into the dirt and demoralize the person across from him. Jaxson Kirkland fits the latter category. Perhaps none of the top guards in the 2022 NFL Draft are as mean as he is.

He’s not a great athlete, and his lower body is dangerously lean for his size, which may raise questions of translatability to the NFL. Nevertheless, Kirkland has positional versatility. He’s played both tackle and guard and at a high level at both spots. His hands are fast and ferocious, and he has superb natural balance. Combined with a road-grader mentality, these traits could make him an impact starter at the NFL level.

Rounding out our top guards in the 2022 NFL Draft is Ed Ingram of LSU. Ingram will have a few off-the-field questions to answer for NFL teams during the scouting process. However, as a football player, he’s strong enough to make the cut here.

Ingram stands at around 6’3”, 315 pounds. Like many other interior offensive linemen, he’s stout and strong. But what makes him different is his stellar consistency in phone-booth situations.

As a pass blocker on an island, Ingram has superb weight transfer, hands, and core strength. He’s not an elite athlete, but he has the lateral mobility necessary to traverse lanes. Ingram is a high-floor blocker who could earn and hold down a starting role for years at the NFL level.

Honorable mention for the top guards

Here are our top centers in the 2022 NFL Draft. A familiar face rests at the top of the list, while three other Power Five starters make appearances after him.

Iowa is a certified factory on the offensive line. So naturally, a lot of attention goes to their blocking unit when the college football season comes around. The hype is real this year. There is another future NFL Draft prospect on Iowa’s front, and his name is Tyler Linderbaum.

Linderbaum is a bit undersized at around 6’3”, 289 pounds, but that’s one of the few bad things you can say about him. He’s explosive and fluid as a blocker in space, and on pass-protection reps, he’s constantly alert and aware of surging rushers. Linderbaum has surprising strength for his size and routinely gathers rushers with little incident. A former wrestler, Linderbaum knows how to subdue his opponents, and soon, he’ll be doing it at the NFL level.

The Fighting Irish had three offensive linemen selected in last year’s draft, all within the first two days. Thus, it comes as no surprise that Notre Dame has another blocker set to be one of the top centers in the 2022 NFL Draft. That would be Jarrett Patterson, the only returning starter from the 2020 season. He has the versatility to play elsewhere, but center is where he has some of his best tape.

Patterson doesn’t have the dominating power or zeal that other linemen above him have. Rather, he’s just a solid player. He’s a great athlete for his 6’5”, 305-pound frame, and he plays with a good pad level, leaning into blocks to maximize leverage. His mobility makes him an asset blocking to the second level, with the alertness to be a valuable safety net in pass protection as well.

The brother of Atlanta Falcons’ 2019 first-round pick Chris Lindstrom, Alec Lindstrom is next in the family line. The younger Lindstrom is set to be a third-year starter in 2020, and this year could be the one that ultimately catalyzes his ascension to the NFL.

Lindstrom likely won’t test as an elite athlete like his brother did, and he’s also not as strong as teammate Zion Johnson. Nevertheless, Lindstrom has a high floor with his footwork, pre-snap awareness, and quick reaction ability. He can be a reliable pro at the center of the line.

Ricky Stromberg is a true junior, so it’s not a guarantee that he’ll declare for the 2022 NFL Draft. That said, if he continues his stellar play from 2020 or even expands upon it, he may have no choice but to capitalize on his building reputation.

As of now, Stromberg is ranked behind Linderbaum, Patterson, and Lindstrom, but it’s not brash to say he could end up in the top three at the position by year’s end. Stromberg better fits the NFL’s preferred size prototype at 6’4”, 310 pounds, and he’s already grown into one of the top centers in the 2022 NFL Draft.

Stromberg isn’t an elite athlete, but he has good footwork and strong hands for his experience level. He does play with a high pad level at times, but overall, he’s a sound lineman who’s trending up.

Honorable mention for the top centers