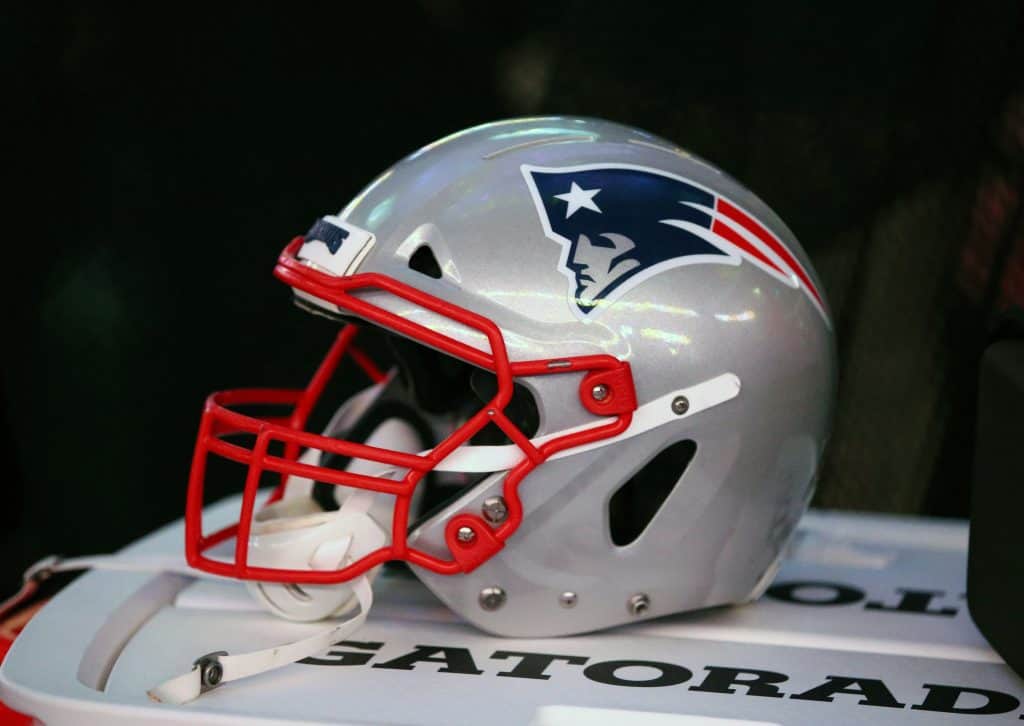 The New England Patriots were the jilted beau of the 2020 NFL season. While they sat and watched Tom Brady adorn his new romance with a shiny piece of finger candy, the Patriots sat in the wreckage of their broken relationship. The worst record of the Bill Belichick era resulted in New England missing the playoffs for the first time since 2008. Belichick’s response? Attack free agency and the 2021 NFL Draft like never before. In this 7-Round 2021 Patriots Mock Draft, they continue to build what they hope will be a Super Bowl-caliber roster to return the Patriots to championship contention once more.

The Patriots may very well be a contender to trade up and get a quarterback in the 2021 NFL Draft. Yes, it would be un-Belichickian to make such a move. However, nothing has been regular about the Patriots’ moves this offseason. Although they re-signed Cam Newton to a one-year deal, the future of this franchise is not on the roster. Trevor Lawrence will be out of contention — as will Zach Wilson — but don’t rule out a move up the board for Justin Fields, Trey Lance, or even Mac Jones.

In this 7-Round 2021 Mock Draft, the Patriots hold firm at No. 15 and address a clear need. Last season, the defense was a shadow of its former self. They were near the bottom of the NFL in terms of run defense. Additionally, they consistently struggled to turn pressure into tangible defensive production.

Enter Micah Parsons. The Penn State linebacker is the walking definition of defensive production. As a sophomore for the Nittany Lions in 2019, Parsons amassed an eye-popping 109 tackles, 14 tackles for loss, 5 sacks, and 4 forced fumbles. Plug him in alongside Dont’a Hightower in the middle of a linebacker group that added Matthew Judon and the returning Kyle Van Noy, and you have a terrifying proposition for opposing offenses.

As the uncertainty surrounding Stephon Gilmore continues, the Patriots add a cornerback early in this 7-Round 2021 Mock Draft. If Gilmore does find a way out of Foxborough, it will be a huge loss to a secondary that allowed the sixth-fewest touchdowns in 2020. Additionally, J.C. Jackson — who had 9 interceptions in 2020 — has an unclear future.

Georgia cornerback Eric Stokes is a likely Day 2 selection that could be a Year 1 starter. He garnered national attention following a blazing performance at Georgia’s Pro Day. The truth of the matter is, the former three-star recruit has been playing football at a high level for the Bulldogs for years now.

Of course, his speed on the back end is attractive, but Stokes also plays the game with vision and physicality. He’s demonstrated solid ball skills, which will help offset any potential lost production from Gilmore. When you include his ability to play special teams, he perfectly fits the mold of a Patriots player.

At a glance, the quarterback position was an unmitigated disaster for the Patriots last season. Upon further inspection, however, it is easy to see why. The pandemic deprived Newton of the usual opportunity to build a relationship with his surrounding cast.

The perceived lack of talent at the receiver position hampered Newton’s ability to produce at a high level. The Patriots clearly believe in him enough to give him another go-around. Still, let’s not be fooled into thinking that he represents the future of the franchise.

Could Davis Mills be that long-term answer? The former five-star quarterback out of Stanford has seen a significant boost in his stock over the past few months — so much so that there is talk of Mills being considered a late first-round selection. That talk feels a little rich for me. Yet, there’s no doubt that he’s worth taking a punt on in the third round.

Mills has the prototypical size of an NFL quarterback and comes with something that Newton appears to no longer possess — a decent arm. He clearly lacks the mobility of some of the other quarterback prospects in the class, but he went to great lengths to demonstrate that he can make throws on the move during a January private workout and at the Stanford Pro Day.

The Patriots recorded the third-most rushing attempts in the NFL last year. Moreover, they had the fourth-most rushing yards per game while averaging the eighth-most yards per carry. They want to run the rock, and the retention of one of the game’s most powerful running QBs demonstrates that it is unlikely to change in 2021.

They re-signed James White this spring and have Damien Harris and Sony Michel as the headliners in the running back room. On the other hand, Michel has yet to play a full season’s worth of games in his three-year career. Harris is the player most likely to take on the role as the lead-back after impressing last season.

It is a reasonable expectation that they add to that stable and in this 7-Round Patriots 2021 Mock Draft that comes in the form of Ohio State’s Trey Sermon. He’s a true between-the-tackles running back who uses his powerful running style to gain extra yardage. His performances late in the 2020 college football season drove Ohio State to the title game, where his loss to injury proved a huge blow to the Buckeyes.

The Patriots’ lack of wide receiver talent has become a standing joke, one which neither Brady nor Newton have found particularly amusing. The temptation to reach for a pass catcher in the first round of this Patriots 2021 Mock Draft was almost overwhelming. However, their track record with early-round receivers is hardly anything to get excited about.

Instead, they take back-to-back mid-round receivers that come with an upside above the current crop of pass catchers. Seth Williams offers a big-bodied boundary receiver who can go up and come down with the ball in contested situations. He is also a willing and able blocker in the run game, making him a valuable asset for the New England offense.

Whatever your position may be on Julian Edelman, his retirement deprives the Patriots of their most reliable receiving threat out of the slot. Simply put, the Patriots have been a worse team in recent years when Edelman isn’t on the field.

Although he is slightly smaller than Edelman at 5’7″, Jaelon Darden is an explosive slot receiver who does an excellent job of making plays after the catch. He leaves North Texas as the program’s leader in receptions, receiving yards, and receiving touchdowns. In addition to his ability in the passing game, Darden brings special-teams versatility as a punt and kickoff returner.

With their fifth-round pick in this 7-Round 2021 Mock Draft, the Patriots continue to stack their secondary with Texas Tech cornerback Zech McPhearson. The former four-star recruit began his career at Penn State before becoming one of the best cornerbacks in the Big 12 for the Red Raiders.

Patriots fans with impressive memory may recognize the name. New England selected Zech’s father, Gerrick, in the 1989 NFL Draft. In addition to his ability as a cornerback, McPhearson brings a versatile skill set to the NFL. He has experience on special teams but also played the “spur” role in the Texas Tech defense — a hybrid safety/linebacker position.

The offensive line was a position of strength for the Patriots last season. Despite losing Joe Thuney to the Kansas City Chiefs, the addition of offensive tackle Trent Brown, plus the retention of David Andrews, should mean that it maintains its status as one of the best units in the NFL.

Still, Thuney’s loss does leave a lack of depth at the guard position. Adding Robert Hainsey in the sixth round of this 7-Round 2021 Mock Draft helps address that need for the Patriots. Hainsey was a four-star offensive tackle recruit and a regular fixture on an impressive Notre Dame offensive line.

A strong and powerful run blocker, a transition inside would make perfect sense for both Hainsey and the Patriots.

A multitalented defensive weapon, LSU’s JaCoby Stevens would blur the lines between two Patriot needs with one player. He has the coverage skills and experience to play safety but the physicality and size to see time as a linebacker. He thrives against the run in the box, and his versatile skill set means he can also contribute as a blitzer.

Although New England owns a fairly deep roster across the defensive line, their free-agency moves suggest they’re not finished. Davon Godchaux, Henry Anderson, and Montravius Adams were all signed in free agency. With the final selection in this 7-Round 2021 Mock Draft, the Patriots add Jordon Scott from Oregon.

Scott doesn’t enter the NFL with gaudy college statistics. Nevertheless, as a true nose tackle for the Ducks, he was more of an occupier than a playmaker. His ability to attract double teams would give the Patriots’ new linebacker corps space to make the plays that were lacking in 2020.