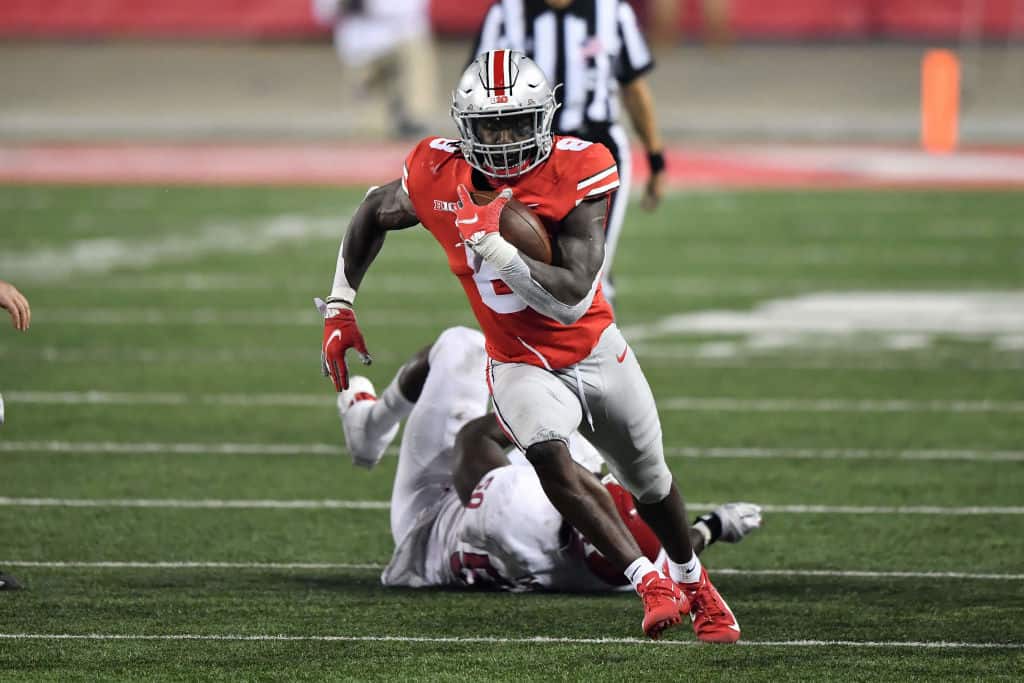 The running back position is growing increasingly volatile in the NFL. There are indeed players who carry superior skill sets, but the point of diminishing returns comes quicker at running back. Thus, the position is deemed as replaceable, and lower-round picks always have a chance to eventually emerge. Ohio State running back Trey Sermon has a chance to follow that path in the 2021 NFL Draft.

Positives: Oklahoma transfer coming off a tremendous season. Powerful, runs through tackles, and has defenders bouncing off him. Possesses outstanding short-area quickness with the ability to make defenders miss, keeps his feet moving, and gets a lot of momentum going up the field. Patiently waits for blocks to develop, finds the running lanes, and consistently runs north and south.

Rarely brought down by a single opponent and drags defenders for extra yardage. Solid receiver out of the backfield who quickly gets into pass routes and extends his hands to make the reception away from his frame. Plays smart football, picks up blocking assignments, and works to become a hot receiver if his quarterback’s in trouble.

Negatives: Lacks the speed and quickness to turn the corner and isn’t a true perimeter runner. Suffered a significant collarbone injury during the national title game in January.

Analysis: After a quasi-productive career at Oklahoma, Sermon took his game to another level after transferring to Ohio State. He’s a big, versatile running back who is effective running on the inside carrying the ball as well as catching it out of the backfield. Sermon does the little things well and could develop into a featured runner on Sundays in the right offense.

Every year, the college football stage is rife with opportunity for running backs looking to prove their NFL potential. Teams without quality quarterback play need to rely on the ground game, and even teams with passing utility find ways to involve their running backs. Trey Sermon had a chance to produce with two quality offenses, and it started with a breakout senior season at Sprayberry High School.

In his final high school season, Sermon rushed for 825 yards and 11 touchdowns on 111 carries, averaging 7.4 yards per rush. Standing at 6-foot-1, 214, Sermon was already near NFL size. Subsequently, he drew interest from some of college football’s powerhouses.

Rated as a four-star recruit, Sermon received offers from Alabama, Florida, Ohio State, and Georgia. However, he bypassed partnerships with those schools and instead chose the Oklahoma Sooners as his next destination.

Kicking off his career at Oklahoma

Unlike other running backs of his stature like J.K. Dobbins and Jonathan Taylor, Sermon didn’t challenge for records — at least not right away. Sermon’s career started on a high note. He logged playing time in all fourteen games as a true freshman with the Sooners. In that time, he recorded three starts, 121 carries, 744 yards, and five touchdowns.

Sermon saw an uptick in production in 2018, accumulating 164 carries for 947 yards and 13 touchdowns. Things were looking up heading into his junior campaign, but Sermon’s trajectory hit a snag.

Sermon’s usage decreased in 2019, and he logged just 54 carries for 385 yards and four touchdowns before a leg injury ended his year. After his down season, Sermon chose to transfer. He picked Ohio State as his destination and set off as a graduate student to try and rekindle his NFL Draft buzz.

On the surface, there appeared to be an opportunity with the Buckeyes. 2019 starter J.K. Dobbins left to join the Baltimore Ravens in the NFL as a second-round pick. Additionally, there were no standouts left to fill the void. Sermon had a good chance to earn reps quickly, and he also had the pedigree.

Sermon wasn’t worried about holding down a starting role, however. He just wanted to be ensured opportunities, and he felt that, with Ohio State’s depth and rotational history, he’d be able to do that. And he did.

As part of the Buckeyes’ stable, Sermon mounted a respectable conclusion to his collegiate career. Although Sermon played in just six games, he managed to amass 675 yards and three touchdowns on just 84 carries. Sermon struck his best yards per carry average yet, managing to distinguish himself while splitting time with Master Teague.

The main source of Sermon’s 2020 production

Despite all this success, it’s worth noting that nearly half of Sermon’s yards on the season, and two of his three touchdowns, came in the Big Ten Championship game.

While at the Big Ten Championship, Sermon enjoyed a monster day. He put up 331 yards and two touchdowns on 29 carries. He also broke Eddie George’s Buckeyes record for the most rushing yards in a single game, for good measure.

Sermon proved his Big Ten Championship showing wasn’t a fluke by reprising his impact against the Clemson Tigers. Sermon amassed 193 yards and one touchdown on 31 carries against Brent Venables’ vaunted defense. In that game, Sermon displayed good explosiveness, physicality, and contact balance, and he also caught out of the backfield. He had a chance to further compound his forward momentum in the National Championship, but things didn’t go as planned.

On Sermon’s first carry against Alabama, the Ohio State running back suffered an apparent upper-body injury. He left the game and did not return, instead making his way to the hospital to receive an X-ray. The injury is reportedly minor and will not have long-term implications, but it deprived Sermon of a chance to end his collegiate career with a boom.

Nevertheless, Sermon’s performances against Michigan State and Clemson will be eye-opening for evaluators. As of now, his stock is still a bit uncertain. However, he does flash some of the traits teams want from contributors on the offensive side of the ball.

Does Trey Sermon have an appealing 2021 NFL Draft profile?

As numerous players have shown, running backs can take a leap at the NFL level without producing a ton in college. It’s a more complicated position, in the sense that replaceable skill sets allow for easier translatability across the board. Sermon was rarely a workhorse back in college. However, he should bring good utility as a rotational back, with the potential to emerge based on the situation.

The Ohio State running back’s size stands out first. He measures in at around 6-foot-1, 215, and he uses that size well. While he’s not the greatest athlete, he has some redeeming athletic traits.

His burst through lanes is good, and he also has some quality wiggle and cut quickness for his size. Additionally, Sermon is a tough runner. Not only does he use his body to embolden contact, but he also proactively tries to get defenders off balance when they come into his range.

Furthermore, Sermon’s vision helps him to maximize the space he gets. Especially in the Northwestern game, Sermon’s diagnosis of holes and his constant evaluation of new holes helped him keep breaking big runs. He wasn’t just running forward. He was able to keep himself clear of congestion, and he used his lateral agility to follow tributary pathways as they opened up. His footwork also helps him out a ton, in this sense.

Are there issues with Trey Sermon’s game?

The issues in Sermon’s game mainly stem from his athleticism. While he has some redeeming traits — he should test with good explosiveness and agility — his top speed is average for a running back. He has enough speed to get into space, but he’s not a breakaway player. This prevents him from housing big runs and also limits his upside.

There are also some other discrepancies with Sermon’s game. He runs upright, which can limit his forward momentum and flexibility. Additionally, he offers almost no known utility as a receiver. While his traits suggest he could be a competent receiver if given opportunities, catching the ball out of the backfield requires a certain feel that Sermon hasn’t shown consistently yet.

Despite the concerns, Trey Sermon is a fairly solid running back prospect in the NFL Draft. Sermon offers good leg churn on top of his foundational traits, and he also brings ample ball security to the NFL. It’s only a supplementary trait because it’s somewhat volatile, but Sermon did not fumble the football on 423 collegiate carries.

Trey Sermon’s pro day numbers are worth writing about, because he certainly tested better than I expected him to. His speed was right around where it should have been — he ran a 4.61. However, Sermon also put up a 37-inch vertical, a 125-inch broad jump, a 6.83 three-cone time, and an outstanding 1.48 10-yard split.

Given that short-range explosiveness is more important than top-end speed for running backs, Sermon’s quantified athletic profile makes him a very appealing option at the position. The Ohio State running back checks all the boxes he needs to.

Trey Sermon brings some intrigue to the 2021 NFL Draft’s running back class. The Ohio State running back isn’t flashy, but he has some redeeming traits that teams oriented toward old-school power running may find appealing. Additionally, his vision and burst may allow him to make the most of any starting opportunity he receives.

The question with Sermon, however, is where he’s valued. Although he tested extremely well, I’d like to see his athletic traits more consistently on tape. He also doesn’t bring much receiving value. Backs like that don’t often go before Day 3. That’s not a bad thing, though.

Even on Day 3, Sermon can fill a niche and provide value for a team. With his density and vision, he can be a good situational back with some change-of-pace upside. And in truth, he does have the starting upside to go earlier, perhaps late on Day 2. Teams like the Patriots, Ravens, and Saints could be good fits.

With his unproven versatility, Sermon will be more a projection as a receiver. That said, Sermon has all the physical traits to be a workhorse back at the next level, and in the fine details, he takes his game up a level. There’s reason to believe he can develop into a more versatile player, and exceed his draft billing in the years to come.