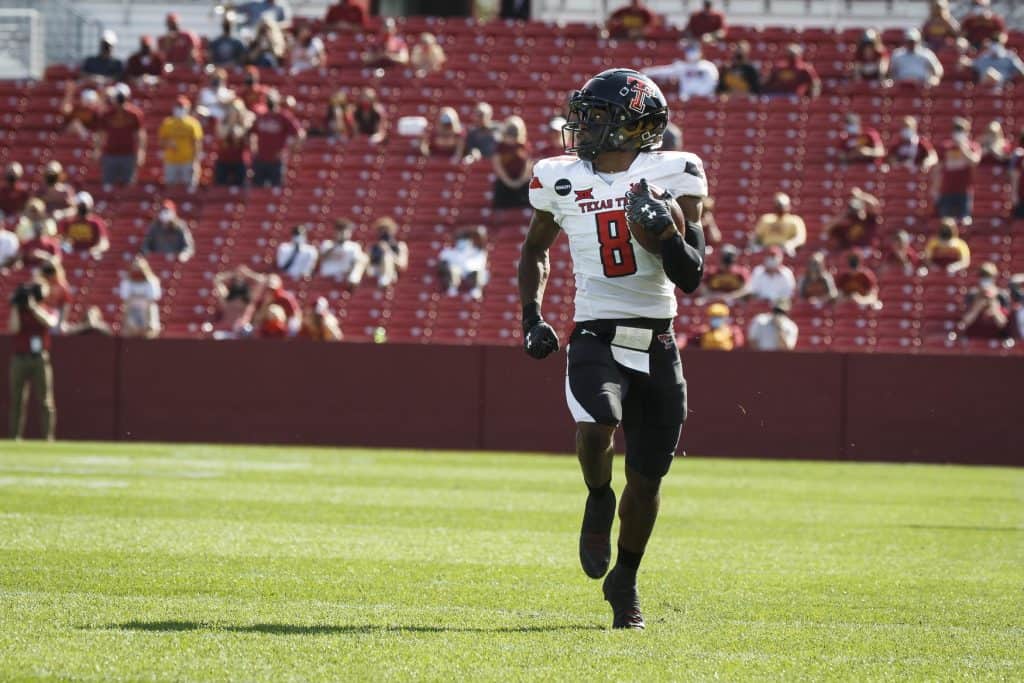 The Texas Tech Red Raiders have had just four defensive backs drafted to the NFL since 2000. Can former Penn State turned Texas Tech cornerback Zech McPhearson become the first since 2010 as he heads to the 2021 NFL Draft?

Positives: Slightly undersized cornerback who flashed cover skills the past two seasons. Instinctive, tough, and plays heads-up football. Quickly locates the ball in the air, has an explosive burst out of his plant, and possesses good hands for the interception. Fluid flipping his hips in transition, runs downfield with opponents, and correctly positions himself to break up passes.

Reads the receiver’s eyes then works to get his head back around and find the ball. Battles opponents, gives effort defending the run, and does not back down from a challenge.

Negatives: Not a stout tackler. Lack of height is a hindrance against taller receivers.

Analysis: McPhearson possesses the instincts, speed, and ball skills, to play at the next level, though his height is a limiting factor. He offers possibilities as a dime or nickel back in either zone or man coverage, and McPhearson also offers special teams’ possibilities.

Texas Tech cornerback Zech McPhearson is no stranger to the NFL Draft. His father, Gerrick, was a pick of the New England Patriots in the 1989 NFL Draft. Gerrick Jr., his elder brother, was a seventh-round pick of the New York Giants in the 2006 NFL Draft. Now, 15 years later, he himself heads to the 2021 NFL Draft looking to add his name to the family list of draftees.

With a family history of athletic success, it comes as no surprise that Zech was a gifted high school player. During his final two seasons playing football at Riverdale Baptist High School, he racked up over 1,000 all-purpose yards and 17 touchdowns. An impressive playmaker at the cornerback position, he logged at least 4 interceptions in every season he played varsity football.

A team MVP, Capital Area District MVP, and First Team All-State honoree, McPhearson was heavily recruited coming out of River View. 247 Sports tabbed him as a four-star recruit. Furthermore, he was ranked as the 32nd best cornerback in the 2016 class, and the 11th best player in Maryland.

As a result, offers came flying in from across the nation. Alabama, Ohio State, California, Pittsburgh, and Wisconsin, were all big names amongst many offers for the young cornerback. However, he committed to the program that he had first attended a training camp at, Penn State.

Arriving at Penn State in 2016, Zech McPhearson took a redshirt year. Over the next two seasons, he would appear in 24 games for the Nittany Lions, carving out a role on special teams.

Meanwhile, he put together some meager statistics in his limited opportunities at cornerback. A fumble recovery in 2017 would be the highlight of his redshirt freshman season. As a sophomore in 2018, he’d have his first pass breakups against Kent State and Illinois, along with his first career tackle for loss against Pittsburgh.

As Penn State added more recruits to the cornerback room, it became apparent that he would struggle for playing time. Having graduated, however, McPhearson could enter the transfer portal and immediately be eligible to play somewhere else. Thus, he chose Texas Tech and impressed during practices prior to the 2019 season.

Having been a bit-part player for Penn State, Zech McPhearson started all 12 games in 2019. He contributed 51 tackles, 2.5 tackles for loss, and broke up 5 passes. As well as impressing in the secondary, he continued his impressive special teams’ performances, blocking kicks against Kansas and Texas.

2020 was a breakout season for the Texas Tech cornerback as he was named to the All-Big 12 First Team. He made nine starts and led the team in interceptions. In the season opener against Houston Baptist, he snagged his first career interception before adding picks against TCU, Baylor, and Oklahoma State.

He’d add further defensive value with a fumble recovery touchdown against West Virginia. Even in his senior season, he’d continue to be a special teams force with a blocked field goal return for a touchdown against Iowa State.

Zech McPhearson projects to be a late-round pick in the 2021 NFL Draft. In addition to his skill set as a cornerback, he should be able to carve out a role on an NFL team as a special teams contributor. Furthermore, positional versatility will add some value to his stock. Although he projects to play outside, the Texas Tech cornerback has experience playing the “spur” role which is a hybrid safety/linebacker role in the Red Raiders’ defense.

There are multiple teams with needs at the cornerback position this spring. Some teams that could suit his skillset are the Los Angeles Chargers, Carolina Panthers, and Seattle Seahawks.