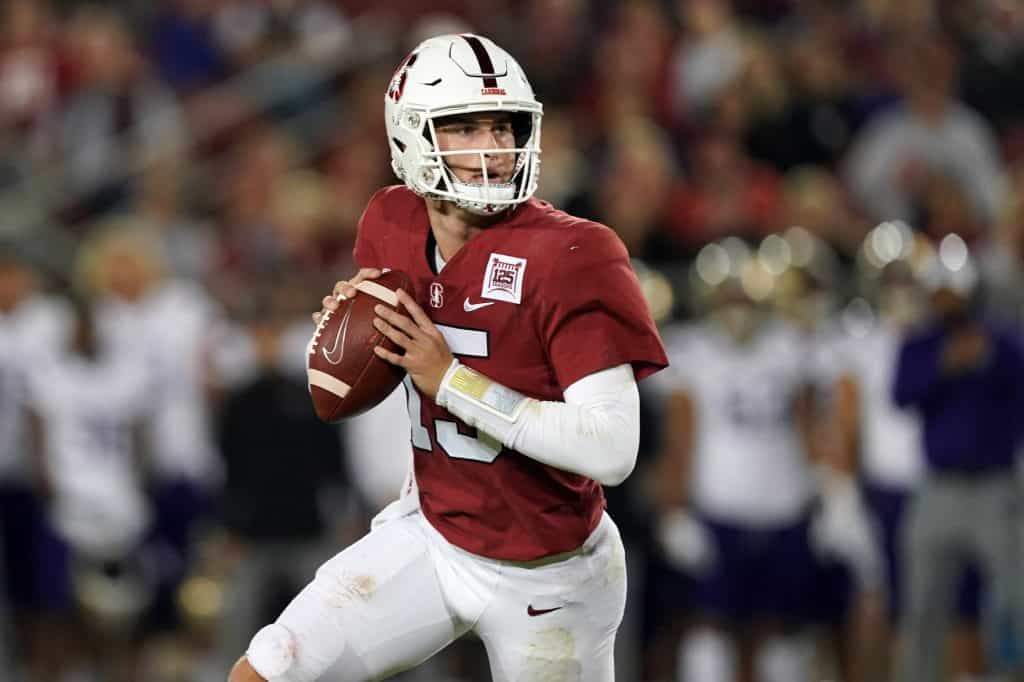 NFL Network analyst Peter Schrager turned heads last week when Davis Mills was selected in the first round (32nd overall) by the Tampa Bay Buccaneers in his most recent mock draft. Schrager cited the buzz around the league. ESPN’s Mike Greenberg and Matt Miller also agreed with that. To me, the Mills first-round buzz is just a part of another NFL Draft cycle of drama and isn’t really backed up on tape.

Every year in draft media, we play this song and dance with hot, new quarterback names. I’ve been scouting since 2014, and it seems like every year, there’s a new quarterback who gets first-round buzz towards the draft before inevitably not being drafted in the first round.

In 2014, it was Derek Carr. In 2015, Bryce Petty and Brett Hundley had that buzz. Ryan Nassib, Connor Cook, Christian Hackenberg, Tom Savage, Cody Kessler, DeShone Kizer, Davis Webb, Jarrett Stidham, Luke Falk, the list goes on. None of these were first-round prospects on film, and eventually, NFL teams agreed with that. However, that won’t stop the media from continuing this trend. Here in the 2021 NFL Draft cycle, the notes and keys have begun to play with a new quarterback: Stanford’s Mills.

PFN’s Chief Draft Analyst Tony Pauline has Mills ranked 76th overall on his draft board as an option in Round 3. That sounds far closer to Mills’ actual value than a first-round pick.

A five-star quarterback coming from Gwinnett County in Georgia, Mills had plenty of buzz entering Stanford. The No. 1 pro-style quarterback recruit, Mills drew the Andrew Luck comparisons the second he committed to the Cardinal.

Unfortunately, some of the issues surrounding Mills at Greater Atlanta Christian came back to haunt him. Mills led GAC to two Georgia state title games, but he suffered two injuries, including a knee injury in his senior season’s title game. That injury essentially benched him and forced him to redshirt his first year at Stanford.

In 2018, Mills was once again relegated to being a backup. He threw just two passes all season behind K.J. Costello. In 2019, yet again, another injury reared its head. As a result, Mills was forced to miss the beginning half of the season. Yet, come season’s end, Costello suffered an injury and cleared the way for Mills to start. He finished the season as the starting quarterback, starting six games and playing in eight. With Costello transferring to Mississippi State, Mills was the unquestioned starter.

Unfortunately, his 2020 season was cut short by the Pac-12’s COVID rules. As such, Mills only had five total games on the season. Yet, that didn’t stop him from declaring for the 2021 NFL Draft.

What Mills does well

Turn on the tape and Mills’ frame immediately stands out. He fits the prototypical build of a quarterback at 6’3″ and 217 pounds. He plays in a “pro-style” offense with plenty of under-center action. Pre-snap, Mills identifies blitzes and does a good job recognizing defensive leverage and matchup advantages.

Mills’ best trait is his arm strength. He can thread the needle into tight windows and knocks out some tough sideline throws. He doesn’t boast the strongest arm in the class, but it’s certainly enough. When he throws off-platform, Mills can deliver accurate throws. He won’t unlock a vertical passing game since his arm just isn’t that talented, and his accuracy on deep throws drops. However, he can deliver with timing and can be an effective rhythm passer.

His toughness can’t be overstated. Coaches have done nothing but glow about his toughness and determination. He was even named a team captain for this shortened 2020 season. Despite numerous injuries, Mills will stand firmly in the pocket and deliver throws and give his guys a chance. Far too many quarterbacks in this class get skittish under pressure, so this was a refreshing change on tape.

How Mills doesn’t really fit in the NFL

Much like I discussed in this Justin Fields vs. Mac Jones article, “pro-ready” has a new meaning these days. The accurate, mechanically sound, and clean throwers (read: risk-averse) quarterbacks who are limited athletes with average-at-best arms just aren’t actually “pro-ready.”

These quarterbacks were “pro-ready” in the era of West Coast-heavy offenses in the 90s and early 2000s. That “pro-ready” stereotype has pervaded into modern evaluation, despite having multiple recent misses at the quarterback position.

The quarterbacks who can’t adlib out of structure just aren’t pro-ready anymore. Defenses are getting faster and more complex. A modern quarterback has to work the play and then create if the play breaks down. These guys aren’t the most perfect mentally or mechanically, but they operate out of structure and play loose and aggressive with fantastic arm talent.

That’s just not Mills. While Mills has a good arm and can make some nice throws, he struggles to create when he’s under pressure. He’s also not mechanically sound, as his footwork can get sloppy, and it affects his accuracy at every level of the field. He’ll stand in the pocket and deliver a throw hot, but he’s oftentimes too willing to take the hit and he needs to learn to throw it away. Post-snap, his mental acuity just isn’t there, and he’ll stay locked onto the read he diagnosed pre-snap.

On a down-to-down basis, the process is just jumbled, and as an evaluator, you’re left guessing as to what will come next.

Mills is along the lines of Jarrett Stidham and Cody Kessler in that he’s a much-ballyhooed recruit who gets media hype but doesn’t really have the tape to back that up. We’ve seen this exact storyline pop up almost every year.

He’s a total project at quarterback. 11 career starts in four years in college is a minimal sample size to judge. In the first round, that’s an astronomical gamble. Generally speaking, your first-round pick should have as few question marks as possible. With Mills, there are way too many.

Compared to the rest of this class, Mills is an even trickier evaluation. He’s a worse athlete than any of Kellen Mond or Jamie Newman. His arm, while good, is below Mond’s as well. He’s a more talented passer than Kyle Trask, but Trask has more experience as a quarterback, which will matter to NFL teams.

Overall, Mills fits the bill as a prototypical build and arm talent for an NFL quarterback. However, his overall profile goes against the grain of recent first-round quarterbacks. The injuries and frequent moments of “What in the world was that?!” on tape are likely enough of a head-scratcher that it will give teams pause. As such, I believe it will be enough for Mills not to be selected in the first round.