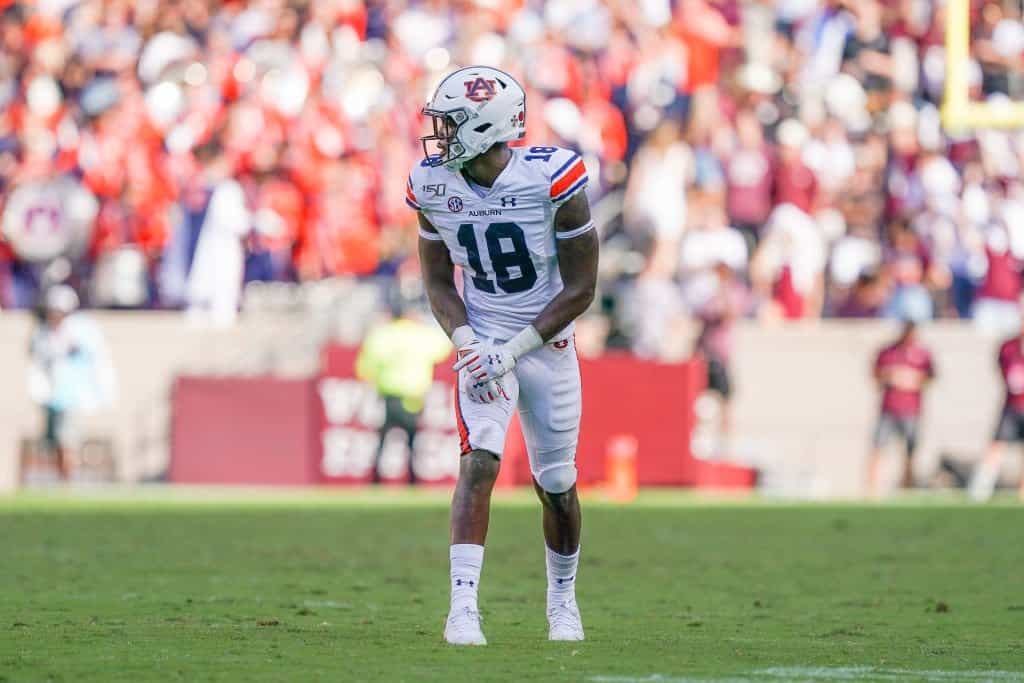 The Auburn Tigers don’t have a particularly impressive recent history when it comes to the wide receiver position. You have to go back to Tim Carter in 2002 to find a pass catcher drafted in the early rounds. How early could Auburn wide receiver Seth Williams be drafted in the 2021 NFL Draft?

Positives: Nice-sized possession receiver who comes away with some incredibly athletic catches. Fluid releasing off the line of scrimmage, quick for a bigger receiver, and tracks the pass in the air. Adjusts to the errant throw, grabs the ball from the air, and possesses strong hands. Uses his hands to separate from defenders and makes the difficult catch with opponents draped on him. Effective downfield blocker.

Negatives: Lacks a burst and plays to one speed. Not very quick in or out of breaks. Wins out for the contested throw, yet struggles to separate from opponents.

Analysis: Williams was the go-to guy at Auburn the past two seasons and showed consistent improvement in his game. He’s a solid possession receiver who will be a good red zone threat, but his inability to separate through routes or speed limits him.

If things had happened differently, Seth Williams might have been preparing for the NBA rather than the NFL Draft. An All-State honoree on the basketball court, his height made him a natural hooper. At Bryant High School, he helped guide the Hornets to a Class 6A basketball state championship as a senior.

An all-around athlete, he also excelled in track and field. Williams earned medals at the state level in both the long jump and high jump.

Despite going 1-9 during his first season of high school football, Williams impressed. A four-star recruit, he courted offers from multiple schools following a junior season where he pulled in 51 catches for 667 yards and 13 touchdowns.

Although he showcased his skillset as a receiver, he also put his physicality to use as a safety. At the time his coaches raved about his defensive ability, commenting that his football career should be on defense.

Nonetheless, the tall pass catcher was ranked the 35th wide receiver in the 2018 class. During a season that he led Bryant to a Class 6A playoff appearance, the fifth-ranked player in Alabama narrowed his college options down to two teams. Living just over 10 minutes from Alabama’s Bryant-Denny Stadium, the Crimson Tide appeared to be an obvious destination. However, in late November 2017, he committed to play for the Auburn Tigers.

Although his numbers may appear meager compared to other pass catchers in the 2021 NFL Draft, Auburn wide receiver Seth Williams has developed into a physical red zone contributor during his three years as a Tiger.

He made an immediate impact as a freshman in 2018. Making his debut against Washington, he snagged 2 receptions for 37 yards. He’d get his first touchdown against Southern Mississippi before impressing with two touchdown catches against Texas A&M. At the end of his freshman season, he had his first of four career 100-yard games against Liberty.

As a sophomore in 2019, Williams emerged as one of the top wide receivers in the SEC. Another two 100-yard games came against Mississippi State and Georgia. Starting with a touchdown against Texas A&M in mid-September, he went five consecutive games with at least one touchdown. With 830 receiving yards and 8 touchdowns in 2019, Seth Williams would enter his junior season firmly on the 2021 NFL Draft radar.

Even with all the disruption, the 2020 season got off to a bang. In a win over Kentucky, he had 6 receptions for 112 yards and 2 touchdowns. Although he would add another 100-yard game and finish the season with 760 receiving yards and 4 touchdowns, an inconsistent Auburn passing game limited his impact in his junior season.

Following the 2020 season, Auburn wide receiver Seth Williams made the decision to forego his senior season and enter the 2021 NFL Draft.

Auburn wide receiver Seth Williams has the ideal physical profile to be a coveted player in the 2021 NFL Draft. At 6’3″ and 211 pounds, he is an imposing physical player whose natural size makes him a monster in several aspects of the wide receiver position.

His size and physicality means he very rarely comes out the loser in contested catch situations. In fact, 50/50 balls aren’t really that when he’s involved. His high school history as a basketball player is evident in the way he can go up and high point the ball. All those attributes help make him a dangerous threat in the red zone.

A part of that skillset is that he possesses a good, strong pair of hands. Williams is a natural hands catcher who will pluck the ball out of the air rather than wait for the ball to hit him in the body. When he catches the ball, more often than not he secures it at the first attempt. There aren’t many examples of double catches where he is bobbling and fumbling the ball prior to finally securing it.

One underrated aspect of his game is his willingness and ability as a blocker. He puts his physicality to good use in the run game, blocking further down the field and helping spring longer runs.

What are some potential concerns with Seth Williams?

There are some concerns that could impact Auburn wide receiver Seth Williams’ 2021 NFL Draft stock. Although he worked on his speed at high school, he won’t blow anyone away down the field. He ran a 4.49 at his pro day which, while good for his size, is not an elite time.

Although his speed might not be a massive concern, his lack of quick feet may well be. In the NFL where creating separation is key for wide receivers, he doesn’t demonstrate quick feet to help create separation at the line of scrimmage in press coverage.

Another concern will be a lack of agility. Although there are some nice examples of him stop-starting to create missed tackles in space, he isn’t the most agile player. He won’t create separation in the NFL with ankle-breaking changes of direction.

Although he has taken snaps out of the slot in his college career, Auburn wide receiver Seth Williams will be coveted in the 2021 NFL Draft as a boundary receiver at the next level. He has the build and skillset of a traditional X receiver in the NFL. Teams that have a need there include the New England Patriots, Detroit Lions, and the New York Giants.

Although he was receiving first-round buzz ahead of his junior season, Seth Williams enters a stacked wide receiver class in the 2021 NFL Draft. As a result, the Auburn receiver may have to wait until late Day 2 or even Day 3 to hear his name called.

In his latest big board for Pro Football Network, Tony Pauline has Seth Williams ranked as his WR13 with a third-round grade. Furthermore, Pauline lists Williams as his 83rd overall 2021 NFL Draft prospect.