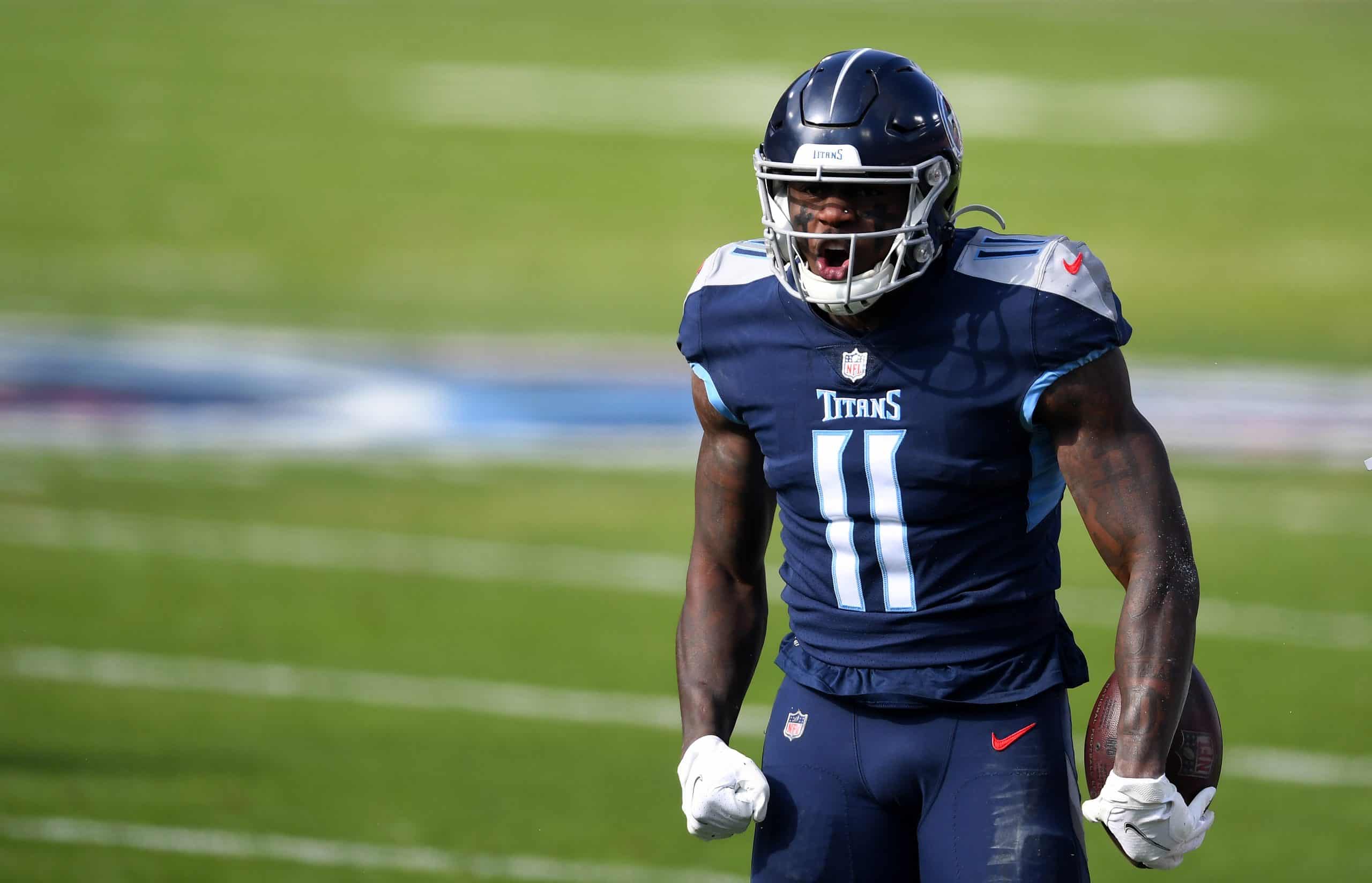 As dynasty fantasy football drafts continue to fire up for the 2021 season, differentiating between the elite players at each position can come down to the slimmest of margins. While factors such as age, production, and the supporting cast all play their part, we are here to help you disentangle all of that and make an informed decision. Here are the top 10 dynasty WR rankings for the 2021 season.

Who are the most consistent playmakers at the WR position? Let’s dive in.

I don’t feel that Terry McLaurin gets the credit that he deserves. Despite having three different QBs start at least four games last season, McLaurin proved he is one of the best in the game. The second-year wideout finished the season with 87 receptions for 1,118 yards and 4 touchdowns in 15 games. In an interview, McLaurin said he did all of this while playing on a sprained ankle…twice.

Over his breakout season, he averaged 8.9 targets per game, resulting in 1.66 PPR points per target and a per-game average of 14.9. While not a long-term solution, the addition of Ryan Fitzpatrick cannot be understated and should be massive for McLaurin’s trajectory.

Additionally, Curtis Samuel joining the team in the offseason means defenses can no longer focus all their attention on McLaurin. Given his age and immense talent, McLaurin is someone who could see his dynasty value soar as a locked-in WR1 in 2021 rankings.

This year, Ja’Marr Chase is seen as the next “can’t miss” WR. Last season, it was CeeDee Lamb. But as we know, the Dallas Cowboys underwhelmed in the post-Dak Prescott offense.

Let me ask you a question. Where do you think Lamb ranked amongst WRs before Prescott went to the locker room in Week 5? Would you be surprised if I told you he was the WR11 in his first five games in the NFL?

In those first five games, Lamb caught 29 of 40 targets for 433 tards and 2 touchdowns while averaging 17.1 ppg. Then, the proverbial wheel fell off the wagon for the offense under Andy Dalton, Ben DiNucci, and Garret Gilbert. Lamb was the WR35 after seeing his fantasy points slashed by 30% to 12.0 per game from Weeks 6 through 17.

Even in the sluggish offense, Lamb ended the 2020 season as the WR22 (13.6 ppg). He recorded 935 yards on 111 targets with 5 touchdowns. Although another breakout WR has passed him in 2021 dynasty rankings, Lamb is a quick start away from regaining his status as a potential top-five receiver in fantasy.

I am not sure people appreciate how special Calvin Ridley is. He is not just a wingman to Julio Jones. In the 36 games where they have shared the field, Ridley averaged 6.6 targets, 4.4 receptions, 61.25 yards, and 0.6 touchdowns per game. On a 16-game average, that is 71 receptions on 106 targets for 980 yards and 10 scores.

Rumors continue to swirl that the Falcons will trade Jones in the not-so-distant future. If you believe those, you should have Ridley ranked even higher as we know what he can and will do with Jones out of the picture. At 26 years old, Ridley is still in his prime and is in the conversation to be a top-five receiver. Perhaps he already is.

Remember when people thought that DeAndre Hopkins would regress following his trade to Houston? How’d that go again?

Hopkins was only the WR4 last season and saw the second-most targets in the NFL at 160. He converted that massive 29.36% target share into 115 receptions for 1,407 yards and 6 touchdowns while averaging 18 PPR points per game. Despite joining a brand new team with no offseason, Hopkins’ 1.80 points per target were the third-highest of his illustrious career. There is no reason to believe this will slow down anytime soon.

Arizona executed the Kliff Kingsbury high-tempo offense, which resulted in the third-highest plays per game in 2020 (67.8). That is no fluke, and I fully expect to see a slight increase in passing play percentage from 57.7% in 2020 (25th in the NFL). That could reach closer to 59% in 2021 due to the personnel changes.

The NFC West might be the most competitive division in the NFL, and to keep up, Arizona needs to air it out. No one is primed to benefit from this more than Hopkins, one of the best receivers in the NFL and my WR7 in 2021 dynasty rankings.

Speaking of a receiver projected to fall off a cliff last season, Stefon Diggs clearly heard the detractors and decided to shut everyone up, myself included.

I fully admit when I am wrong about something, and I was dead wrong about what would happen with Diggs. While I did not think he would fall off a cliff, I never expected the Bills to pivot and become a pass-first team. I don’t think anyone outside of Bills Mafia saw the development of Josh Allen coming, either.

That is a mistake I will not be making again as Diggs reminded everyone why he is one of the most dangerous receivers in the NFL. He should be one of the highest-ranked WRs for dynasty in 2021.

Getting a top-five WR on your dynasty team could set you up for years of sustained success. If you are lucky enough to have an early draft pick, who should you target?

As a rookie, Justin Jefferson established himself as a top deep threat in the NFL. The former LSU standout finished the 2020 season with 1,400 receiving yards — a total that set rookie records in both the Super Bowl era and Vikings’ franchise history.

Jefferson surpassed both Anquan Boldin (1,377 yards) and Hall of Famer Randy Moss’ Vikings’ record (1,313 yards) with a 133-yard performance in Week 17. He also tied Odell Beckham Jr.’s Super Bowl-era record of seven games with 100+ receiving yards by a rookie. If not for Justin Herbert and the award historically leaning to QBs, Jefferson would have been the NFL Offensive Rookie of the Year.

Jefferson is remarkable and very much deserving of the WR5 spot in my 2021 dynasty rankings.

From this point on, every WR on this list can make a claim for the top spot in 2021 dynasty rankings. They all have the ceiling to be the best in the game. At one point this offseason, DK Metcalf held that spot for me. But I have since cooled ever so slightly on this — partially due to the ongoing Russell Wilson drama. There is also the odd disappearing act he pulled last season.

Unfortunately, Metcalf disappointed towards the end of the season as he scored just 57.4 PPR points over the final five games — WR38 during this stretch. A stark contrast to the WR3 ranking he held coming into the critical end-of-season stretch for fantasy managers.

Here is the thing. I know Metcalf can be the best in the NFL. He has the size and skills to do that, and we have seen glimpses of it in the past two seasons. To do that and join the ranks of the players listed above, he needs to do something they all do week in and week out: beat every CB that lines up against them. The best are open, even when they are covered. Metcalf was shut down far too often in 2020. For him to truly ascend to the next tier, he needs to improve against the NFL’s best.

Last season, Davante Adams was my WR1, and he remained so until recently. Green Bay turned into the spin-off of Days of Our Lives. If you were to guarantee me Aaron Rodgers was back in Green Bay for 2021 and beyond, Adams would still be my WR1.

However, like all other Packers’ players, his dynasty value is directly tied to the right arm of Rodgers. Drop-in either Jordan Love or Blake Bortles, and Adams slides to the WR7-WR10 range. Hopefully, we will get to the season finale of this show soon. Let’s just hope it is not as disappointing as the ending of Game of Thrones.

If you are interested in having A.J. Brown on your dynasty rosters, you need to make that happen before the 2021 season kicks off. He might be virtually untouchable after this season.

Some players have an innate ability to rack up touchdowns. With regression the narrative of his second year, Brown proved his rookie campaign was no fluke. Battling through a pair of injuries, Brown recorded 70 receptions on 106 targets for 1,075 yards and 11 touchdowns.

While he was the WR12 in total points, Brown was sixth in points per game (17.7) amongst the top 30 receivers. In points per target, he was third (2.3) and second in points per reception (3.48). The only thing that limited his production was his target total. Yet, that won’t be an issue in 2021.

Between the losses of Corey Davis, Jonnu Smith, and Adam Humphries, the Titans are losing 47.9% of their targets, 48.3% of their red zone targets, and 56.6% of their air yards. There is no one else on this team to receive them. Brown could easily blow past the 125 target figure in 2021 and end up the WR1 on the season. It was already a coin flip between him and my WR1 in 2021 dynasty rankings.

While Adams deals with a QB question and Brown is stuck on a run-focused offense, there are zero concerns with Tyreek Hill on the Chiefs’ offense. Hill remains the focal point for the Patrick Mahomes-led passing attack. Thus, making him one of the best receivers for dynasty managers.

This is the second time within the last three seasons in which Hill scored 328 fantasy points. So long as he is in Kansas City, he will have Mahomes under center. That is a type of consistency and upside that cannot be ignored. He takes the top spot in my 2021 dynasty WR rankings.