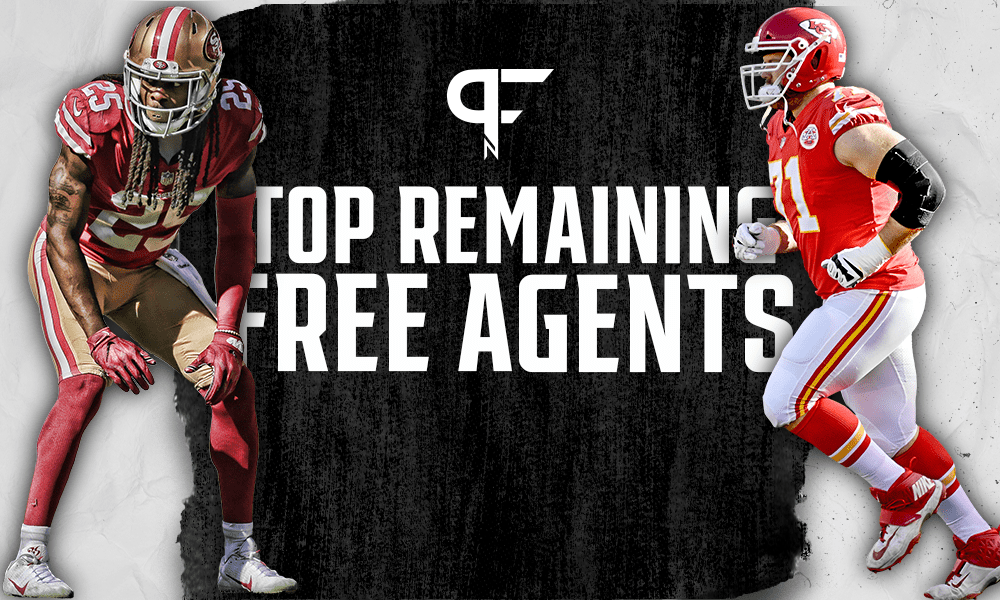 The NFL free agency “legal tampering window” opened on Monday, March 15, and since then a lot of the best players have been signed. However, following the 2021 NFL Draft, there are still some intriguing free agents available for teams looking to add veteran experience to their rosters. So let’s take a look at the top available free agents still remaining on the market.

With Dak Prescott off the market, the QB position lacks star power

After Prescott became the second-highest-paid QB in NFL history, he has left behind a somewhat empty market of QB free agents in 2021. Compared to last offseason, the QB position does not contain any surefire starting talent.

Griffin hasn’t formally retired quite yet, but he’s apparently drawing widespread interest as a television analyst by Fox and ESPN. Blaine Gabbert re-signed with the Tampa Bay Buccaneers so he can chase another ring while backing up Tom Brady.

There is little in the way of sure-fire wide receiver talent available. Larry Fitzgerald still hasn’t decided on his future. Tate is still a free agent, as is Jeffery, and neither has made a decision on their future yet. Jeffery has certainly lost a step but could be a veteran presence that is used in a limited or focused role on a team looking to compete.

Westbrook is the most intriguing name on this list. Entering 2020, he was highly thought of as a candidate to have a big season. Westbrook had back-to-back 100 target seasons in 2018 and 2019.

Damiere Byrd joined the Chicago Bears on a one-year deal worth over $1.1 million. Dez Bryant could find himself in a tryout situation as a big slot that could help in the red zone.

Behind Aaron Jones, there are a lot of questions about the running back position in the 2021 NFL free-agent class

The running back position is another intriguing group. Aaron Jones was the clear standout. His decision to remain in Green Bay could remove the only back capable of receiving a deal with an average annual value of more than $10 million a year.

The signing of James Conner by the Cardinals took the last really viable starting RB off the board. Bell recently made waves after commenting on Andy Reid as a coach. Johnson is still a back that can come in with limited touches and create as a pass catcher and as a runner.

The veteran experience of Peterson is likely to see him find a role somewhere. He’s been rumored to both the Detroit Lions and the New York Giants. He’s never needed much spin-up time, so it’s unlikely we see him sign anywhere before the start of training camp. Brian Hill signed a one-year deal with the Tennessee Titans, taking one of the younger names off the market.

Hunter Henry and Jonnu Smith headlined this group from a talent standpoint and both ended up in New England. The top 2021 NFL free-agent tight ends will team up to give Cam Newton — or perhaps Mac Jones — a unique pair of targets in the middle of the field.

The top three names in Burton, Eifert, and James all provide solid options as backup tight ends. Burton has flashed in the past, and actually has 14 touchdowns and 119 catches over the past four seasons. Eifert had 13 touchdowns in 2015, but that feels like a lifetime ago. Still, he received 60+ targets in the past two seasons.

Like the position itself, the free-agent crop of tight ends has some talent at the top end but lacks depth.

The offensive line group was intriguing when free agency opened, but the majority of the main options are gone. However, following the selection of Teven Jenkins in the 2021 NFL Draft, the Bears released Charles Leno Jr. Leno immediately became the top-rated free agent at the position and quickly signed with the Washington Football Team.

The Colts signed offensive tackle Eric Fisher on a one-year deal worth over $8 million. His Achilles’ injury muddles his projection, but he’s off the market. It will be interesting to see where Schwartz eventually ends up. He is still a strong player when healthy. Back injuries are never good, but he can be an upgrade for a team needing protection on the right side.

The defensive group of free agents does not lack talent even this late in the cycle. Atkins and Sherman have both proven to be valuable starters over the course of their career. Harrison was considered one of the best defensive linemen in the league just a couple of seasons ago. Even after a couple of down years, he is still extremely talented and could be a valuable addition.

There are a number of intriguing cornerback and defensive line options among the remainder of the group. Sheldon Richardson ended up returning to the Minnesota Vikings on a one-year deal. Malik Hooker still has intriguing upside, but he hasn’t stayed healthy and has never played at a consistent level in the NFL.

Poole can still start for a team as a slot cornerback and won’t be too expensive, especially this late in the game. Kawaan Short hasn’t played much football recently, but that should not stop teams from seriously considering the 32-year-old defensive tackle. In his last healthy season, he had 3 sacks and 12 tackles for loss on the season. Olivier Vernon had a massive season in 2020, but he ruptured his Achilles’ tendon late in the season.