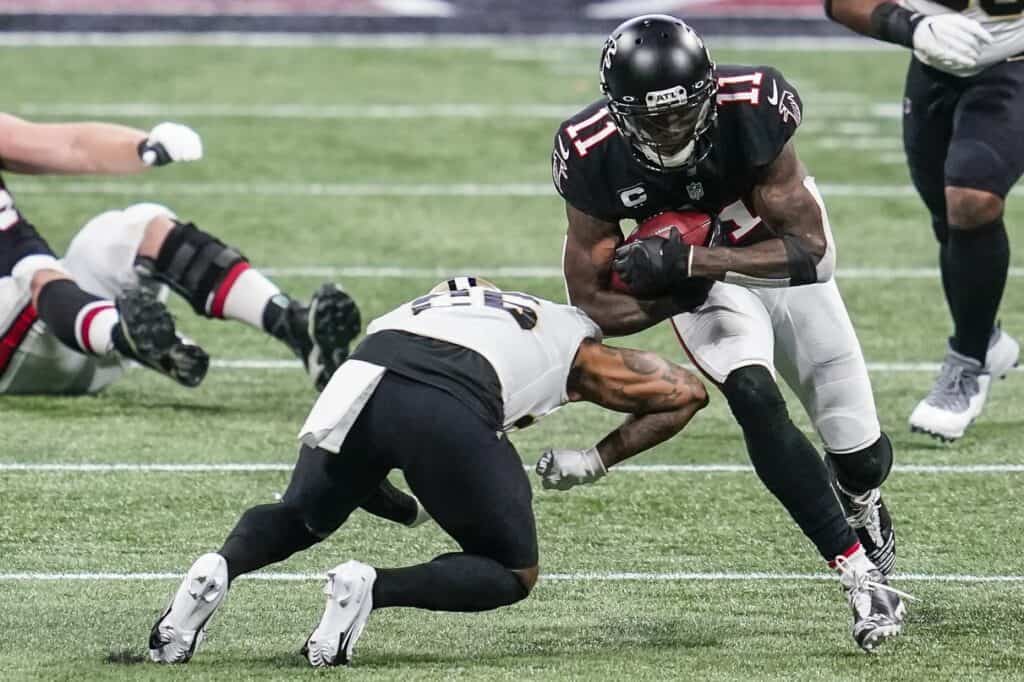 Following much speculation, Julio Jones has been traded to the Tennessee Titans. Since entering the league in 2011, Jones has been one of the top receivers in the league. Let’s look at what the trade means for both sides and how Jones has performed in his NFL career.

Julio Jones traded to the Titans

The Titans will receive Jones and a sixth-round selection in 2023 in exchange for their 2022 second-round selection and a fourth-round selection in 2023. Jones will provide a second high-end weapon opposite A.J. Brown for the Titans. There will be plenty of opportunities for Jones in Tennessee. The departures of Corey Davis and Jonnu Smith have left 157 targets available in the Titans’ offense. There are then another 35 targets available from the departure of Adam Humphries. Jones should see a considerable number of those 192 targets.

Getting a receiver who can be your clear No. 1 for a second-round and fourth-round selection, is an absolute bargain for the Titans. Sure they have to pay him, but Jones’ contract is extremely manageable for the team acquiring him.

A somewhat disappointing return for the Falcons

The Falcons and Jones were destined for a split it appeared. However, with some discussion that Jones would be traded for a first-round pick, this return is somewhat underwhelming.

The Falcons were set to have one of the most exciting offenses in the league, but now there will be considerable question marks. Can Calvin Ridley be a No. 1 receiver? Was Russell Gage’s breakout driven by him playing that third receiver role? Can Kyle Pitts be a major weapon as a rookie?

Now, the Falcons are left with questions, a large amount of dead money, and just a second and potentially fifth-round pick in return. That return just simply does not seem enough for what the Falcons are left with in terms of dead money. In a pivotal year for the future of Matt Ryan in Atlanta, losing Jones is a big blow for the veteran quarterback.

On the bright side, the Falcons can at least pay their draft picks now.

Jones has been extremely impressive in his career

It is no surprise there was plenty of interest in acquiring Jones this offseason. Through 10 seasons, he’s played in 135 games and posted 12,896 receiving yards and 60 receiving touchdowns.

Over the course of his career, Jones has led the league in receiving yards twice and receiving yards per game three times. He also owns a career 64.2% catch rate, having fallen below 60% just twice.

Jones has missed four or more games just twice in his 10-year career. In Week 5 of the 2013 season, he fractured his foot, forcing him to miss the remainder of the season. In 2020, Jones struggled with hamstring concerns, costing him seven games.

Nevertheless, throughout his career, Jones has generally been able to play through injury. In his other eight seasons, the star wideout missed a total of seven games.

When playing relatively healthy, Jones has produced impressive numbers. In fact, he has seven campaigns with more than 1,000 receiving yards. The lone season in which he fell short of the 1,000-yard mark and played in 13 or more games was his rookie year, when he finished with 959.