The Washington Football Team’s new starting quarterback, Ryan Fitzpatrick, is one of the NFL’s most fascinating players. Despite never seeing significant team success at any of his eight stops in the NFL, his explosive playstyle and unmistakable enthusiasm for the game have made him beloved by fans.

However, 2021 might be Fitzpatrick’s best chance to break that unfortunate trend. He is joining a team that made the playoffs last season despite starting three different quarterbacks (four if you include Taylor Heinicke in the Wild Card Round). The advanced metrics show that Fitzpatrick could be the piece they need to go even further in 2021.

In nine appearances for the Miami Dolphins last season, Fitzpatrick totaled 2,091 yards, 13 touchdowns, and 8 interceptions. Those statistics don’t look particularly impressive on the surface. However, it isn’t reasonable to directly compare Fitzpatrick’s statistics to those produced by quarterbacks who played for an entire season. As such, we need a different way to evaluate his play.

Fitzpatrick was the highest-impact quarterback in the NFL last season

To accommodate for Fitzpatrick’s intermittent playing time, we will turn to the Offensive Value Metric (OVM). The OVM is a grading system created by the (Bx) Movement to evaluate players based on how much they contribute to their respective offenses.

Last season, Fitzpatrick earned the highest OVM grade of any quarterback at 32.72. A grade that high indicates that, despite his relatively limited playing time, Fitzpatrick had a larger impact on his offense than any other player at his position in 2020.

In order to explain why Fitzpatrick’s OVM grade was so high last season, and to see how he might perform in Washington next season, we need to look at how he performed on the various advanced metrics involved in calculating a quarterback’s OVM grades.

Let’s start with his aggressiveness, something Fitzpatrick is well-known for. Last season, he threw into tight windows on 21.7% of his passes. That was the second-highest percentage in the NFL, ranking just behind Mike Glennon.

On its own, that wouldn’t earn Fitzpatrick such an impressive OVM grade. What makes his performance special is how successful he was at completing his passes despite their difficulty.

Fitzpatrick completed 68.5% of his passes in 2020, which ranked seventh in the NFL. That percentage was 3.5% higher than expected, a differential that also ranked seventh. Put all those statistics together, and it becomes clear why Fitzpatrick earned such a high OVM grade. He was both incredibly aggressive and surprisingly efficient, an impressive combination.

Additionally, Fitzpatrick’s willingness to attempt such difficult passes, and his success while doing so, is a large part of why the Dolphins kept bringing him into games in relief of rookie Tua Tagovailoa.

While Tua often seemed reticent to throw the ball when his receivers were closely covered, Fitzpatrick was perfectly willing to throw his receivers the ball even when they were clearly not open.

That is a necessary quality when playing with receivers like DeVante Parker and Mike Gesicki. They were two of the NFL’s worst players at creating separation. In such circumstances, that sort of gunslinging attitude can be highly beneficial.

For a more in-depth examination of Fitzpatrick’s play in 2020, let’s take a look at how he performed on a weekly basis. In the charts below, you can see Fitzpatrick’s OVM grades from each week of the 2020 season represented by the black dots. For comparison, the yellow line shows the league average OVM grade for QBs from last season. 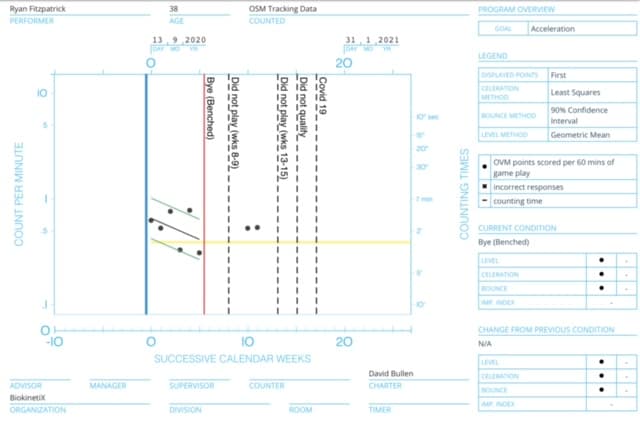 It is here that you can see some of Fitzpatrick’s trademark inconsistency on display. In Weeks 3 and 5, he earned two of the top 10 highest grades in the NFL, at 46.47 and 45.43, respectively. However, he also earned grades below 20 points in Weeks 4 and 6. They weren’t bad grades, coming in at only slightly below the league average, but that is still a relatively high range.

That said, Fitzpatrick’s peaks were higher than almost any other QB in the NFL, and they weren’t infrequent either. He regularly graded well above the league average. His sample size is relatively small, but Fitzpatrick certainly looked the part of an elite player last season.

Fitzpatrick is no stranger to high OVM grades

It is worth noting that 2020 wasn’t the first time Fitzpatrick earned the NFL’s highest OVM grade for a quarterback. Back in 2018, when he played for the Tampa Bay Buccaneers, he led all quarterbacks with a grade of 35.91. Interestingly, he was closely followed by Jameis Winston, his teammate at the time.

Still, it hasn’t always been great for Fitzpatrick. During his first season with the Dolphins, his grade dropped to 27.75. Meanwhile, he earned grades of 23.1 in 2017 and 27.4 in 2016. That said, he clearly has the potential to play at an elite level for the majority of a season, and his OVM grade has led the NFL in two of the last three seasons. His recent success has to be an encouraging sign for Washington fans with high aspirations for 2021.

Washington could be a legitimate playoff threat

Washington made numerous additions during the offseason other than Fitzpatrick. They revamped their receiving room, adding several new faces to play alongside Terry McLaurin. This includes signing explosive wide receiver Curtis Samuel from the Carolina Panthers and Adam Humphries from the Tennessee Titans, in addition to drafting Dyami Brown.

They also added numerous pieces to a defense that ranked second in yards allowed and fourth in points allowed last season. Washington won their division last season and pushed the eventual Super Bowl champion Tampa Bay Buccaneers to the brink in the first round of the playoffs.

With their new additions, they seem the favorites to once again take the NFC East crown. That would earn Fitzpatrick a playoff berth for the first time in his long career. And once they get there, I doubt any team will want to face them.

Keep Reading! Adrian Peterson is still showing value as an NFL running back