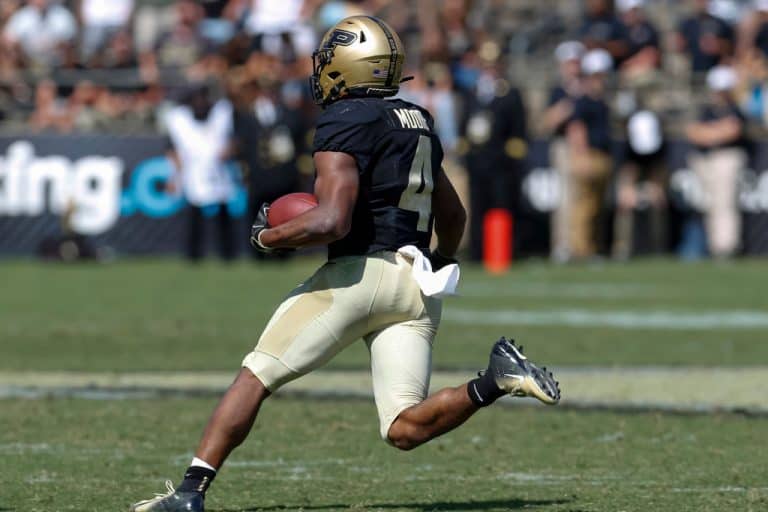 What's in this article? Click to show
Rondale Moore’s dynasty value for 2021
Rondale Moore exploded onto the scene as a freshman in 2018
Where should you draft Moore in dynasty rookie mock drafts?
Want more fantasy football analysis and news?

Arguably the most dynamic player after the catch, Purdue WR Rondale Moore is one of the highest valued fantasy football players in the 2021 dynasty rookie class. Moore, a possible first-round selection, showed incredible upside despite durability concerns.

If you need a wide receiver on your team, 2021 is the year to get one. It is the deepest position with loads of incredible talent. No matter what you covet in a player, there is one for you.

If you like big-bodied physical receivers, Ja’Marr Chase and Tamorrion Terry are for you. If you prefer route-running technicians, DeVonta Smith and Rashod Bateman should be at the top of your list. However, if you value your dynasty receivers to have game-breaking after the catch ability, look no further than Purdue’s Rondale Moore.

You would be hard-pressed to find someone more dynamic than Moore once he has the ball in his hands. While his time on the field was brief, the impact he had was substantial. Thanks to his incredible freshman season, Rondale Moore’s value for dynasty was set once he decided to leave college.

When examining this rookie class, I believe there is a clear top five. That is DeVonta Smith, Ja’Marr Chase, Jaylen Waddle, Rashod Bateman, and Rondale Moore. The order in which you place them is a personal preference. Every one of these receivers will go inside the first round of dynasty rookie drafts, whether it is 1QB or Superflex.

Until we have landing spots for the players (even past the NFL Draft to an extent), I would recommend using tiers rather than straight rankings. This group of receivers is the Tier 1 of this draft class, and the goal should be to walk away with at least one from this group.

Rondale Moore exploded onto the scene as a freshman in 2018

Rondale Moore graduated from Trinity High School after transferring from New Albany, where he won a state basketball title. As a senior, Moore posted a Trinity-record 104 receptions for 1,461 yards and 16 touchdowns. A four-star recruit, Moore participated in the Under Armour All-American Game and was ranked the #41 wide receiver by 247 Sports.

In his very first game, Rondale Moore lit the field on fire. Moore’s 313 all-purpose yards set the record for most in program history. He also had a 76-yard rush to score a touchdown to go along with his 11 catches for 109 yards. Rondale Moore’s dynasty value started to shoot up from this game alone, especially in devy leagues.

He then single-handedly beat Ohio State, catching 12 passes for 170 yards and 2 touchdowns.

He was the third player in Big Ten history with 100 or more receptions and caught 11 passes or more in six games.

After an incredible freshman season, the expectations could not be higher for Rondale Moore. Unfortunately, he could never quite capture that same momentum.

Then, the mess of the 2020 Big Ten season came, and we didn’t even know if Rondale Moore would play. After initially opting out, Moore made his highly anticipated return against Minnesota, where he hauled in a career-high 15 receptions for 124 yards and had a rushing touchdown.

In his third game back, Moore was injured in the opening minutes against Nebraska. Although he did return from the lower-body injury, this was the last time we saw him on the field. Moore opted out of the remainder of the season and declared for the NFL Draft.

After a record-breaking freshman season, Rondale Moore played in just seven more games at Purdue. He ended his career having played in only 20 games over the course of three seasons. Moore caught 178 passes for 1,915 yards with 14 touchdowns while totaling 3,094 all-purpose yards (154.7 per game).

The question comes down to whether Rondale Moore did enough when on the field to warrant the high value in dynasty leagues, or will his size and injury risk be enough to push drafters and NFL teams away?

Where should you draft Moore in dynasty rookie mock drafts?

If you were to sum up Rondale Moore in one word, that word is versatility. Whether it is on special teams, working in the slot, or taking sweeps, there is not much Moore can’t do.

It also is going to require a creative coach to unlock Rondale Moore’s potential. At 5’9″, 180 pounds, it would be too easy for a coach to see his size and 4.33 speed and label him as a returner who can assist in the passing game at times. However, I believe that would be a complete disservice to Rondale Moore’s value for both the NFL and dynasty.

Everything he does on the field far exceeds those measurements. His ability to absorb contact is phenomenal and traces back to him squatting 600 pounds as a freshman. While not a contested-catch-style player, Moore has over a 42″ vertical and can go up and get the ball.

Related | DeVonta Smith Dynasty Value: Where to draft him in 2021 rookie dynasty drafts?

In the slot, unless a defense puts their best corner on him, which they won’t, no one is stopping him. He is as savvy as it gets at the line and runs incredibly crisp routes. The knock on Rondale Moore is he had a tendency as a freshman to have concentration drops. There are also the injury concerns. That’s about it, honestly.

Rondale Moore is in the Tier 1 of receivers in this dynasty class and has the value to back it up. If he lands on the right team, Moore could easily end up as my WR2 behind DeVonta Smith.