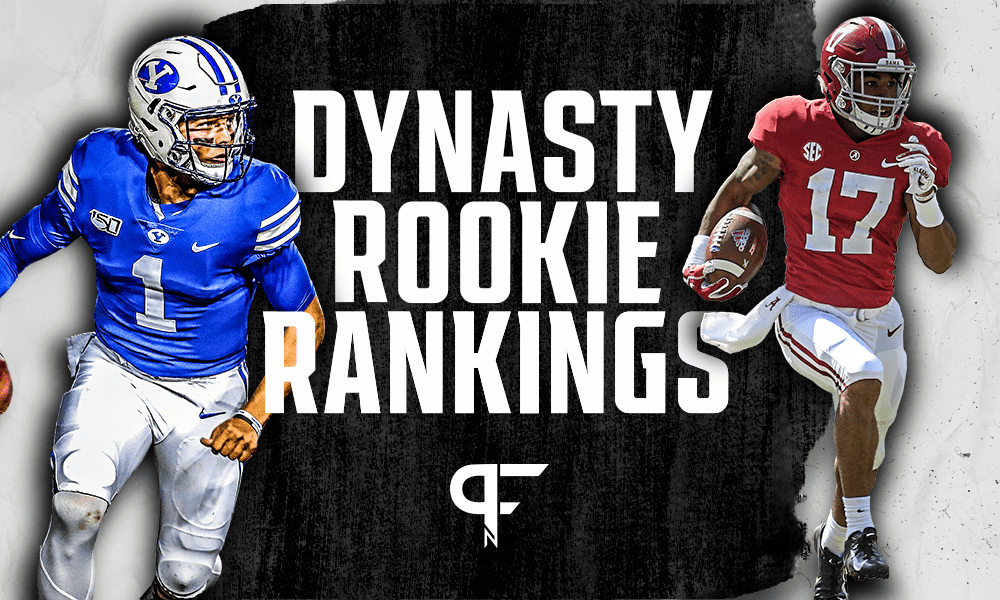 Youth is always at a premium in dynasty leagues -- here's a look at our top dynasty prospects in our updated 2021 dynasty rookie rankings.

Starting with the 1.01, let’s work our way through the first 10 spots.

Despite what zero RB truthers want you to believe, running backs are the backbones of your dynasty teams. In 2021, Najee Harris is in a league of his own. His vision is incredible, and he moves in a way a 6’2″, 230-pound player shouldn’t be able to move.

Harris will not be a burner, and honestly, I don’t care what his 40-yard time is or his age. The tape speaks for itself. Not only did he go back to college to win a national championship, but he ran for 1,466 yards and caught 43 passes while scoring 30 total touchdowns in just 13 games. Now on a Steelers team that wants to use him as a true three-down back, Harris is already inside my top 12 in RB rankings.

Despite opting out of the 2020 season to focus on his NFL career, Ja’Marr Chase‘s résumé and body of work already spoke volumes about his skill set. He set SEC records during the 2019 season with 84 receptions and 1,780 receiving yards at LSU, including 24 receptions of 20+ yards.

Not only is he reunited with his former LSU QB in Joe Burrow, but the Bengals enter 2021 with a massive workload up for grabs. Although Tee Higgins and Tyler Boyd remain, the absence of A.J. Green and others results in 195 vacated targets (34.5%) from their 2020 total. While Chase will not get all of those, it’s hard to project him for less than 130 in his rookie season. Chase has just as good of a shot to be the No. 1 overall player in 2021 dynasty rookie rankings as does Harris.

Perhaps some might see it as blasphemous to rank a TE as the No. 3 overall pick. But when that player’s ceiling is the best in the NFL, you don’t feel bad about doing it. Kyle Pitts is a unicorn in every sense of the word. He produced 43 receptions for 770 yards and set the school single-season touchdown record by a tight end with 12. He is genuinely one of the most overly athletic people I have ever seen.

Following the Julio Jones trade to the Titans, the Falcons have 195 vacated targets (32.2%), which could be a massive factor in Pitts’ Year 1 production. Outside of Calvin Ridley, Pitts should be the No. 2 option in the passing game as he is more receiver than tight end.

Javonte Williams runs with an aggression that few can match, even at the NFL level. As a junior, he rushed for 1,140 yards on 157 carries, averaging 7.3 yards a carry.

Williams took a step forward in the receiving department as well, catching 25 passes for 305 yards and 3 touchdowns. He led the nation with 75 avoided tackles, was second with 42 rushes of 10 yards or more, and was third with 72 rushing first downs.

Although he now shares a backfield with Melvin Gordon, it is expected that Williams will surpass Gordon on the depth chart relatively quickly. Even in an RB1A/1B split, dynasty is a multi-year format, making the slight headache for a few games worth it for multiple years of potential RB2 upside.

Travis Etienne will go down as one of the most productive RBs in recent memory. Etienne finished his collegiate career with 686 rushes for 4,952 yards with 70 rushing touchdowns. He also caught 102 passes for 1,155 yards and 8 receiving touchdowns in 1,852 career snaps over 55 games.

Additionally, Etienne is the NCAA FBS record holder for most career games scoring a touchdown (46 of his 55 career games). He is one of only 12 players in FBS history with 4,000 career rushing yards and 1,000 career receiving yards.

Head coach Urban Meyer reunited Etienne with his former Clemson QB and No. 1 overall pick Trevor Lawrence, but unfortunately, we won’t see the two together in Year 1. Etienne remains a long-term dynasty asset, but his season-ending injury forces us to wait another year for production.

DeVonta Smith had a season for the ages in 2020. Playing in all 13 games, he caught 117 passes for 1,856 yards and 23 touchdowns en route to becoming the first WR to win the Heisman Trophy since Desmond Howard in 1991. Smith had nine games of over 130 yards receiving and three of 200-plus. He holds the SEC and Alabama career record for receiving touchdowns (46) and receiving yards (3,965).

Smith brings a versatility and polish to an Eagles team that desperately needs a boost at receiver. Paired with Jalen Reagor, the Eagles have two dynamic receivers who can take over the game at any moment. Furthermore, it only helps in what could be a breakout season for Jalen Hurts. As his likely WR1, Smith could see over 120 targets and 1,000 yards in Year 1.

Rashod Bateman initially opted out when it appeared the Big Ten would not play last fall. Then, he opted back in and appeared in five games only to opt out again due to concerns about the COVID-19 pandemic. He finished the 2020 campaign with 36 receptions, 472 receiving yards, and 2 touchdowns. In 2019, Bateman accumulated 1,219 receiving yards and 11 touchdowns.

Bateman is a route-running technician and might be the most “pro-ready” of the class. From size to speed to contested catches, Bateman has it all. What he might not have, though, is volume, which is out of his hands.

Baltimore’s offense is built on running the ball, and if that doesn’t work, they run it again with Lamar Jackson. They attempted the fewest passes last season (406), the lowest total since the Seahawks back in 2012 (405). Unless the Ravens completely rewrite their game plan, Bateman only has flex value in 2021.

Selected as the No. 34 overall pick in the 2021 NFL Draft, Elijah Moore put himself on the map after a head-turning junior campaign. He was the primary weapon in Lane Kiffin’s offense in 2020, totaling 86 receptions, 1,193 yards, and 8 touchdowns — all in just eight games. Moore tested off the charts with a 4.35 40-yard dash, 36-inch vertical jump, 121-inch broad jump, and 6.67 three-cone drill in the pre-draft process.

Moore has all the skills needed to be a rookie breakout. He could become Zach Wilson‘s go-to target underneath, raising his fantasy outlook in PPR scoring formats that reward volume. While I am not saying this is the comp for Moore, there is a lot of Antonio Brown in his game. Just throwing that out there. He could be the steal of 2021 dynasty rookie rankings.

Jaylen Waddle only played 242 snaps in six games last season. He caught 28 of 32 targets for 591 receiving yards and 4 touchdowns. Waddle averaged 19 yards per reception for his collegiate career, ranking second on Alabama’s all-time list (minimum of 100 receptions). Despite missing several games due to an ankle injury, his film showed a rare blend of explosiveness and precision. That’s why he went as the second receiver off the board in April.

Waddle’s size and health may concern some dynasty managers, but I believe he’s equipped to handle a large workload. I genuinely think he could lead the Dolphins receivers in 2021, especially given the injury track record of DeVante Parker and Will Fuller.

Ever since his freshman season, Trevor Lawrence has been crowned the next “generational prospect,” drawing comparisons to Andrew Luck and Peyton Manning. Despite the pressure and the gargantuan magnifying glass picking apart his every move, Lawrence has done nothing but live up to every expectation placed upon him.

Lawrence ended his career at Clemson with a 34-2 (.944) record as a starter. His two losses both came in the College Football Playoffs. In fact, Lawrence did not lose a regular-season game as a starter in either college or high school.

Next Page: Which rookies rank 11 through 50 for dynasty?